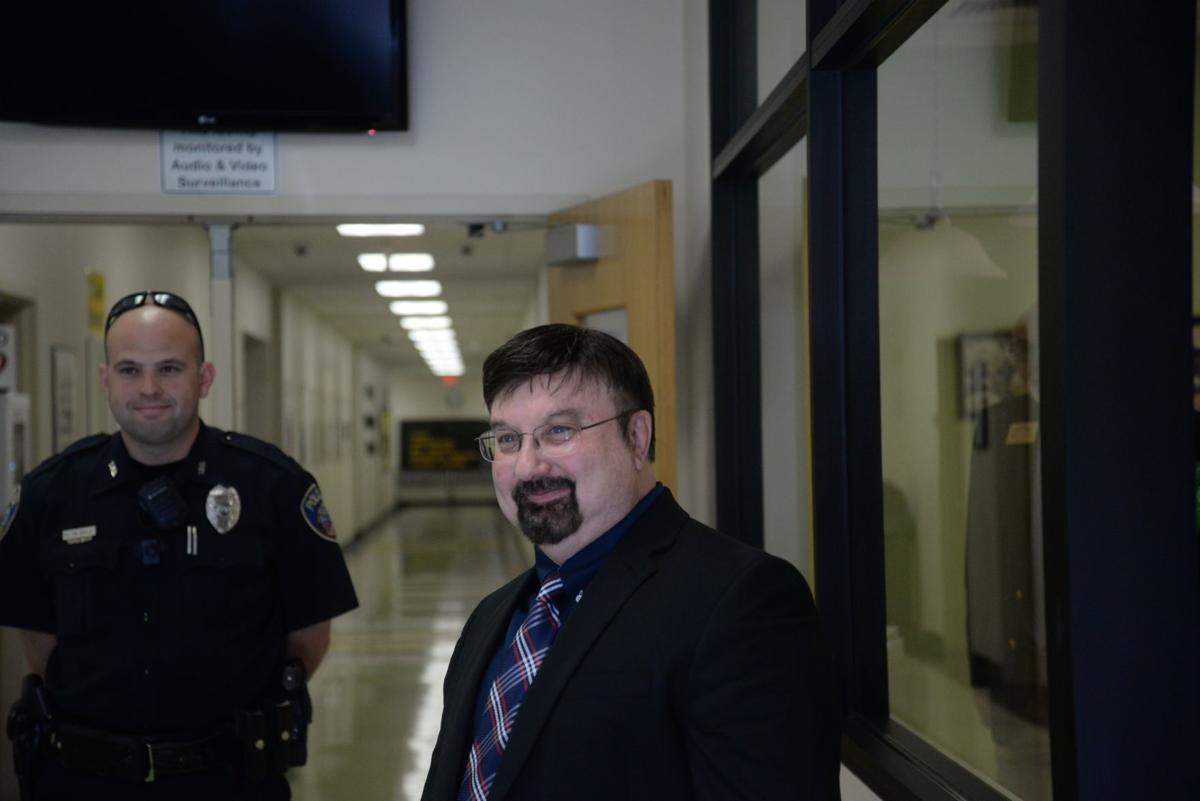 James talks with Troutman police officers after the meeting. 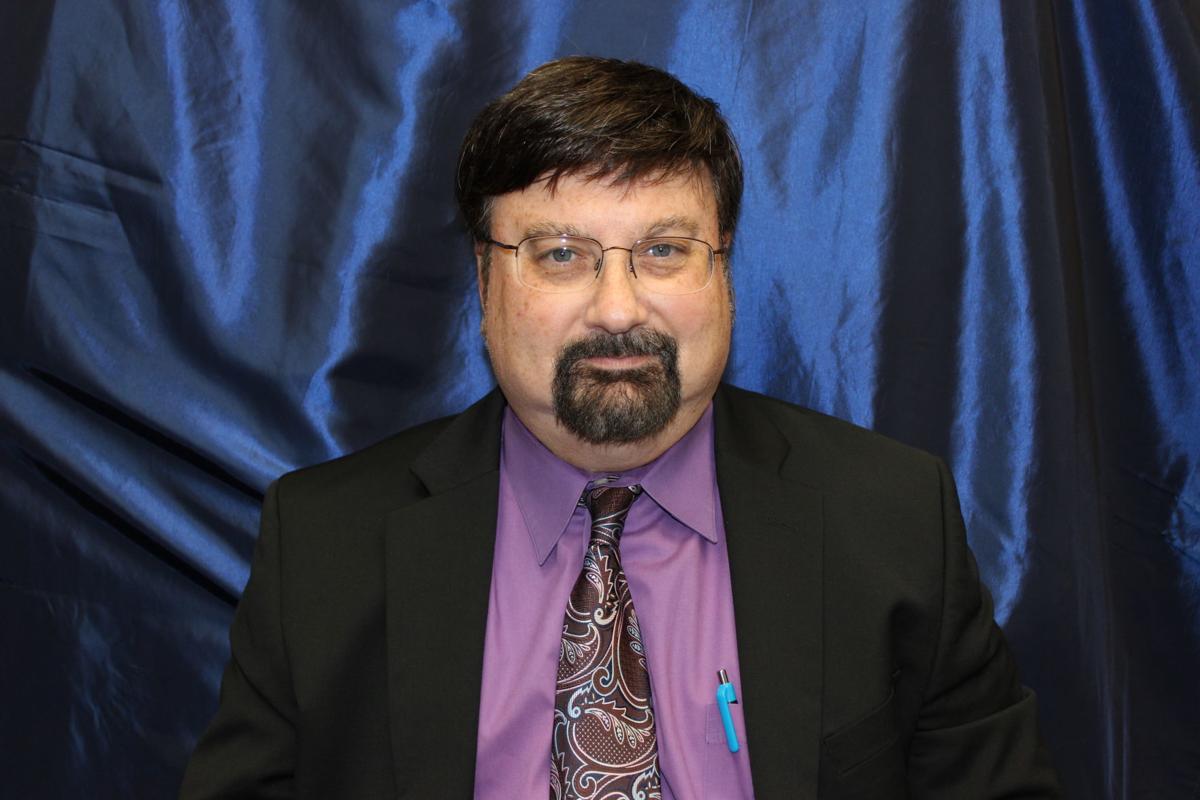 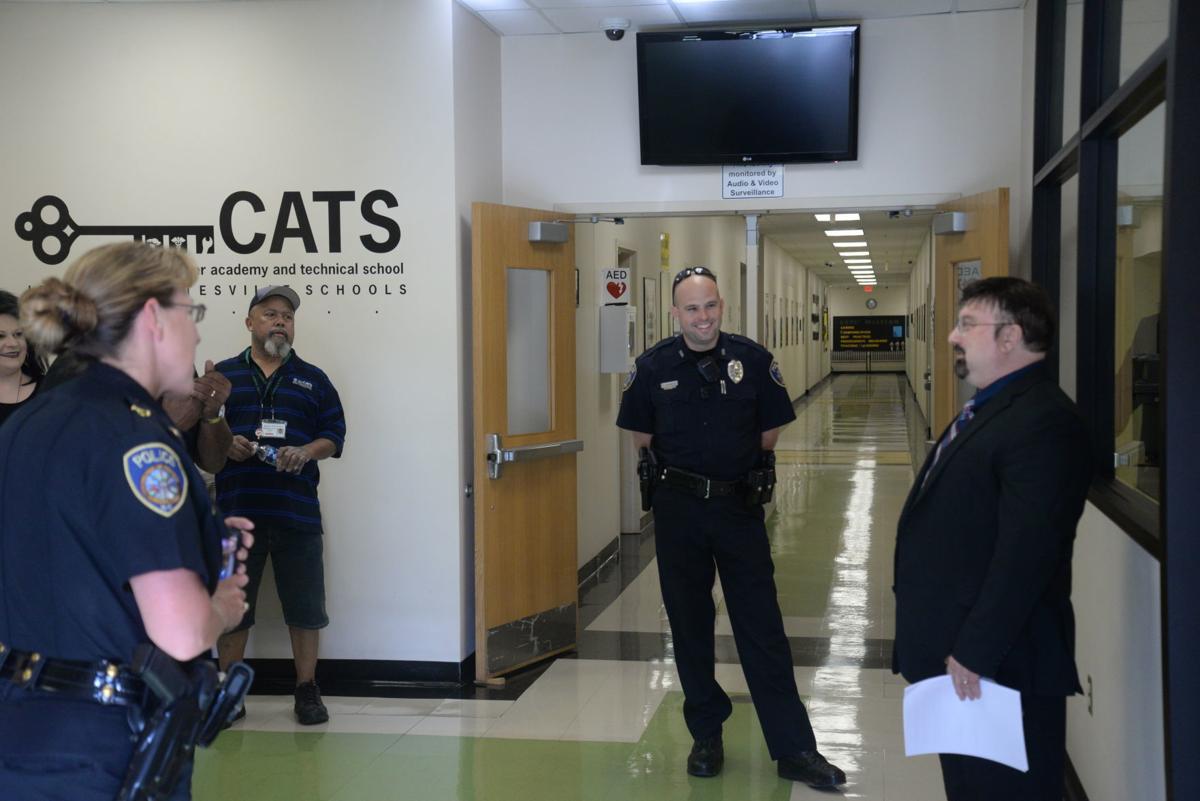 Dr. Jeff James speaks with members of the Troutman Police Department after the announcement. 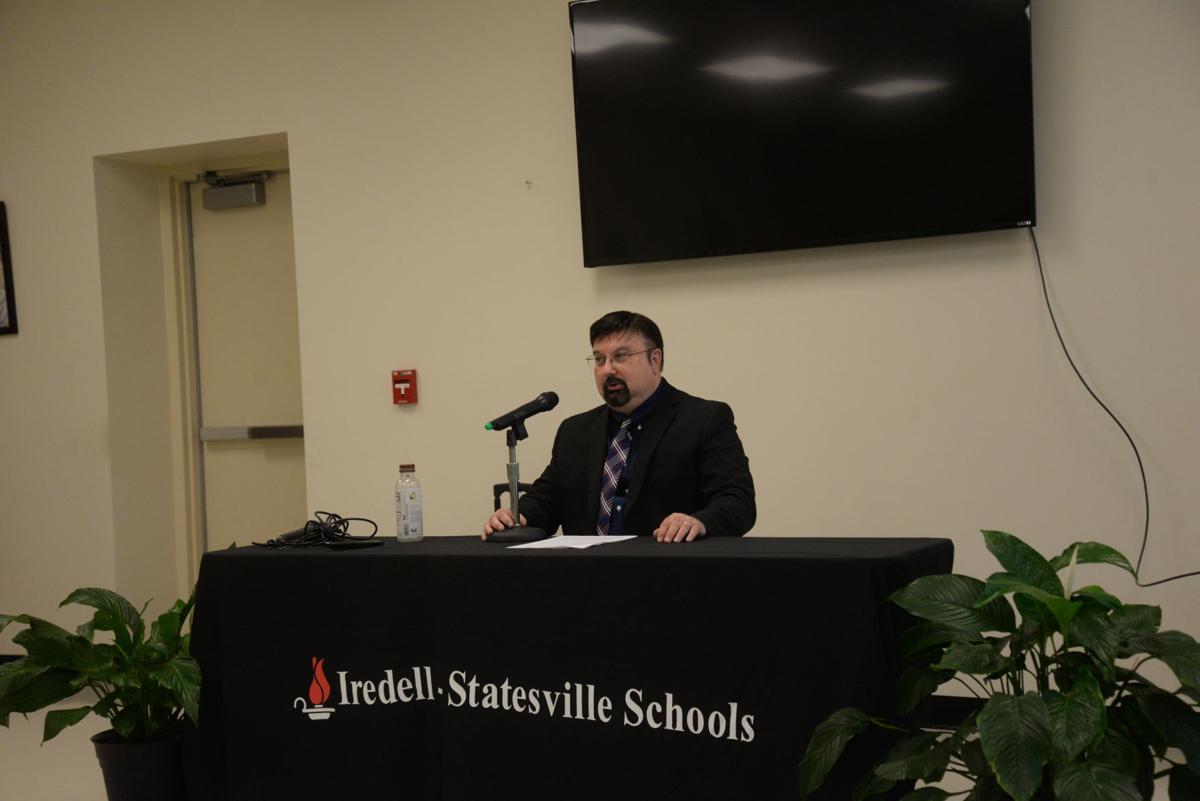 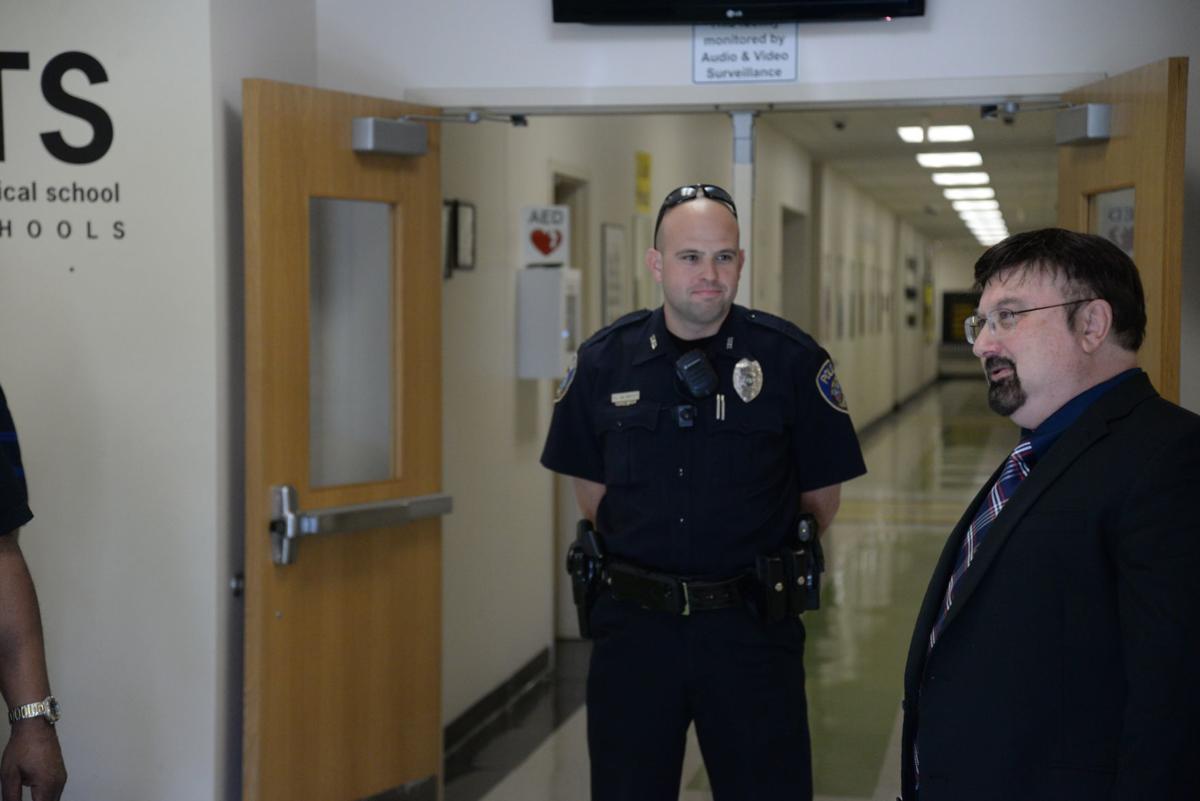 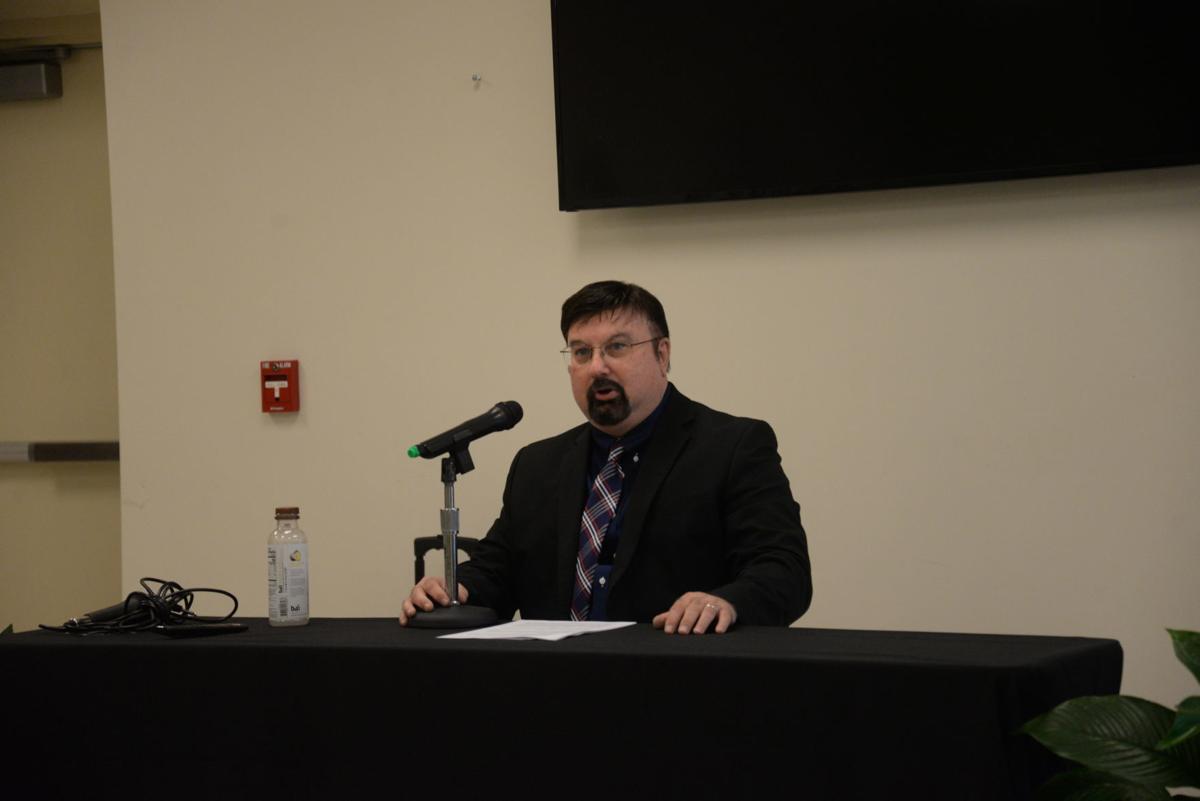 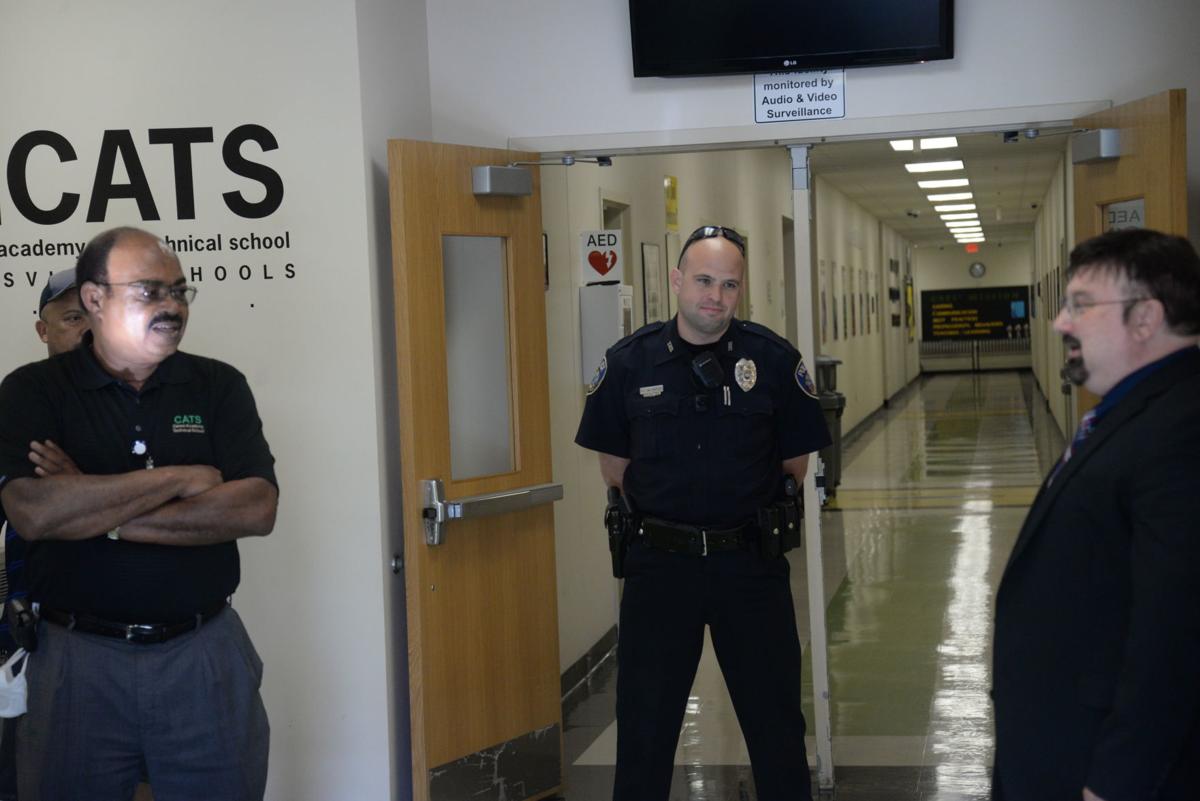 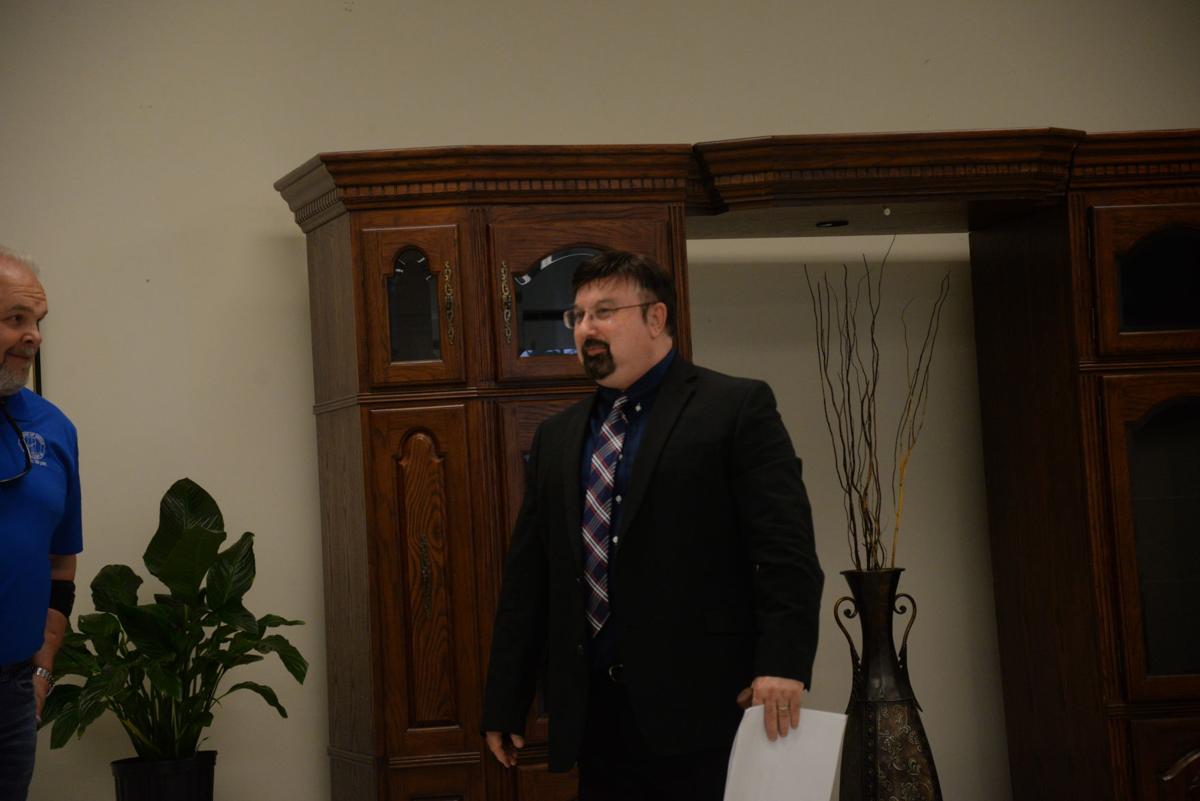 Dr. Jeff James is introduced at Friday’s board meeting.

Jeff James has been named superintendent of Iredell-Statesville Schools. James will assume his role on July 1. He will replace Brady Johnson, who will retire June 30.

Currently serving as the superintendent of Stanly County Schools, James earned his Bachelor of Arts degree and MBA from UNC-Charlotte. He also holds a Master of Arts in Teaching from UNC-Charlotte, a Masters of School of Administration from Gardner-Webb University and a Doctorate in Educational Leadership and Cultural Foundations from UNC-Greensboro.

James has 39 years of experience as a professional manager with 17 years in the educational area.

Following 18 years in business and industry, James began his service at I-SS in 1998 as a special education teacher at Statesville High School. His leadership roles included service as the assistant principal at South Iredell High School and principal at Troutman Middle School.

In 2013, James assumed the role of assistant superintendent for Curriculum and Instruction/Federal Programs/Grants/NC Pre-K in Montgomery County.

“It is with great humility and excitement that I accept the challenge to be Iredell-Statesville Schools next superintendent,” he stated in a news release. “I appreciate the board’s rigorous hiring process. I have gone through several in my lifetime, and I can say this was by far one of the most in-depth. This is certainly warranted in this situation as I can think of no more of a crucial role than selecting the next leader of such a progressive school system.

“I follow two great superintendents. Dr. Terry Holliday and Brady Johnson, both I consider mentors. I hope to use the lessons learned from both to inspire and lead the system into the 22nd century. I look forward to working with all staff, the board, and the community to continue the trend of excellence Iredell-Statesville schools are known for.”

The announcement took place at a Board of Education meeting Friday.

Board chairman Martin Page said that after looking through the public surveys, the board determined that the public wanted a superintendent who can make tough decisions, has ethics, keeps people accountable, has excellent listening skills, understands the importance of early childhood education and can succeed in both business and academic settings.

Page said that James presented all these qualities in the interview process.

“Everyone can trust and respect this new superintendent,” Page said.

In a news conference after the announcement, James said that his focus is on making students successful.

“My whole career has been about what’s best for kids,” James said. “I will do everything I can to make a kid successful.”

He also said that the school system should be focused on closing opportunity gaps for impoverished families.

“With poverty, a lot of those problems present themselves in the school system,” James said. “As educators, we have to try to close those opportunity gaps.”

He said he viewed his job as a calling to help students be successful.

“There is no greater calling to help a child succeed in life,” James said. “This is not a job. This is a calling.”

In regard to starting his tenure in the midst of the coronavirus pandemic, James said that he would evaluate its impact as that develops.

He said that he hoped that in-person classes could resume sooner rather than later.

“Hopefully sooner than later we can get back into school,” James said. “There are students that need our support.”

James said he was looking forward to being superintendent in the county where he was raised.

In other news at the meeting

Residents were not allowed to attend because of the restrictions related to the coronavirus.

Board members met in a room, each separated by six feet, without an in-person audience but in a livestream broadcast. Staff members and the press met the new superintendent in separate rooms.

“Obviously, this is a different meeting setup than usual in response to these extraordinary times,” Page said.

The board also voted 6-1 to allow emergency authorization of bids to I-SS school nutrition in response to the COVID-19 pandemic.

Board member Bill Howell voted against the measure because he disapproved of how it was added to the agenda later than other agenda items. He also said the measure wasn’t the purpose of Friday’s meeting.

“This is a special board meeting and for a totally different reason and, I think by cluttering this, it takes away from the duty that we have today,” Howell said. “If this is such an emergency, we should have had it last month.”

James talks with Troutman police officers after the meeting.

Dr. Jeff James speaks with members of the Troutman Police Department after the announcement.

Dr. Jeff James is introduced at Friday’s board meeting.