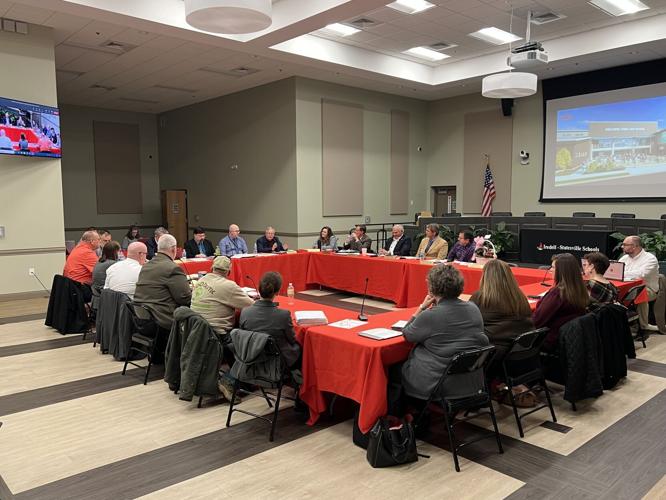 The Iredell-Statesville Schools Board of Education and the Iredell County Board of Commissioners met Tuesday to discuss the plans for Weathers Creek High School. 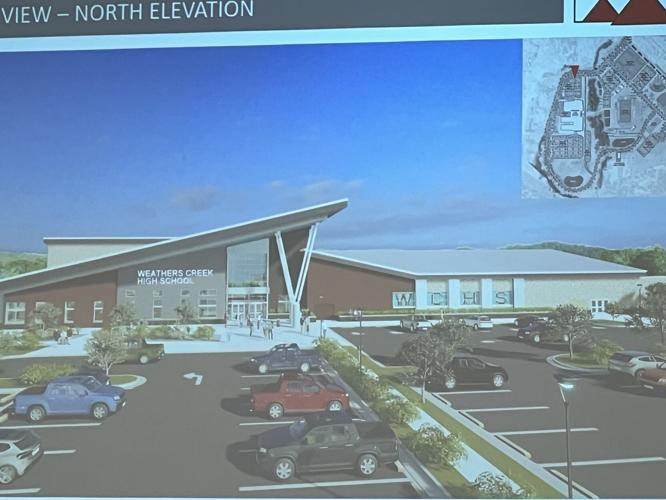 This is a rendering of the proposed Weathers Creek High School. 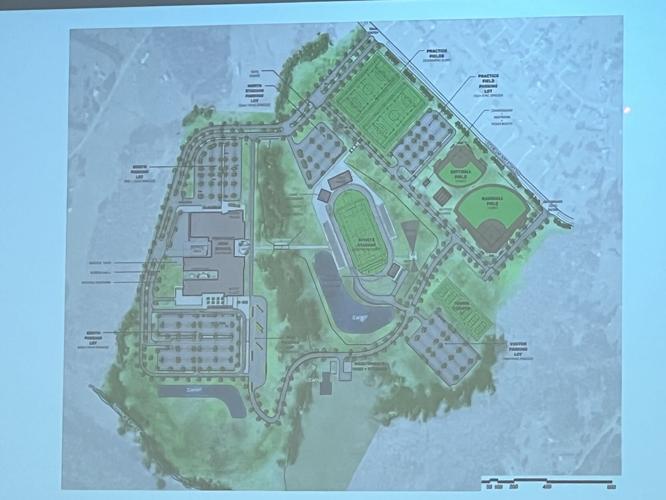 Statesville Record & Landmark A site plan of the proposed high school was presented.

The Iredell-Statesville Schools Board of Education and the Iredell County Board of Commissioners held a joint meeting Tuesday afternoon with the main — and only — topic of discussion centering around the construction of the school system’s planned new high school in Troutman and how to best alleviate the financial concerns associated with it.

The school, planned to be called Weathers Creek High School and located on Overcash Road, was initially given $80 million in grants after voters passed a referendum in a March 2020 election with the option to pass the bond winning by 33 percentage points (66-33).

However, with the beginning of the planning phase of the project coinciding with the start of the COVID-19 pandemic, alongside the huge increase in construction and material costs that followed, a project that was expected to come in near that $80 million mark ballooned to nearly $170 million by current estimates.

The option currently being explored by I-SS to help bring the total cost down would be to build the school in a public-private-partnership with an outside company.

The method, called P3, would allow the school to be built at less expense to the county since the outside company would be more easily able to obtain grant funding thanks to a commitment to build the school using “greener” methods.

“Their goal is to build a completely self-sustaining school … and they get tax rebates and grant opportunities from that,” I-SS Chief of Facilities, Maintenance and Technology Tim Ivey said. “It would allow us to produce a higher-quality building at a lower cost to the taxpayers.”

The catch to the P3 agreement is that I-SS would only be leasing the building for the first handful of years the school was open with the outside company owning and maintaining it. At the end of the period, which is typically about seven years according to Ivey, the county would have the opportunity to buy the building to own it outright.

However, no members of any outside company that would be able to assist with the P3 was in attendance at Tuesday’s meeting. A future meeting is being planned with the hope of having them in attendance.

Members of the Iredell County Board of Commissioners, concerned with the overwhelming projected costs of the new school, sought to keep options open in regard to Iredell-Statesville’s sixth high school in order to find a more cost-effective route forward.

Some of the ideas discussed included searching for a new, more cost-friendly construction site, building Weathers Creek High School in phases, or even building a second high school adjacent to South Iredell High School on land already owned by I-SS.

While the Board of Education was open to looking into other options, they were unanimous in support of continuing the project as planned at the Overcash Road site, as well as in their rejection of the idea of putting two high schools on the same land.

“When you look at numbers on a page, it may be easy to think you can just look at the land and drop another school there,” Ivey said. “But in reality, that’s really not for the good of that community. I do not think the Troutman community would be receptive to having two huge schools right there.”

Another option discussed was taking the issue back to the ballot boxes and asking the residents of Iredell County to vote on whether they would fund the deficit, but that option, too, was shot down by members on both sides for the fear that if the vote were to fail, building the school may become a legal nightmare.

Despite the meeting running over two hours, there was no real solution agreed upon before both boards adjourned. It was, however, decided that there would be another meeting as soon as possible after both sides could better iron out ideas for solutions, including the possibility of having a representative from a P3 company in attendance to discuss that option.

“Today was a great stride. This group has come a long way,” Ivey said. “We’re both trying to come up with solutions, and I think we’ve gotten to that.”

This beach in North Carolina is among 10 ‘deadliest’ in the nation, travel site says

“There are beaches which present some dangers ... whether that’s hurricanes, surfing fatalities, or shark attacks,” Travel Lens reported.

All in the family: Sisters open new urgent care in Mooresville

Admittedly, Sheila Whitman and Kelly Flynt, sisters from High Point, had experienced nearly every professional milestone in their lives as a t…

A Mooresville man was arrested on drug charges after a traffic stop for erratic driving, said Iredell Sheriff Darren Campbell.

Our Town 100 years ago: Mooresville and South Iredell in 1923

Today, the “Tribune” begins its 19th annual series of articles looking back at the news and advertisements from Mooresville’s newspaper of a c…

What exactly surveillance balloons are used for?

What exactly surveillance balloons are used for?

Rescuers work to save quake survivors

Rescuers work to save quake survivors

The Iredell-Statesville Schools Board of Education and the Iredell County Board of Commissioners met Tuesday to discuss the plans for Weathers Creek High School.

This is a rendering of the proposed Weathers Creek High School.

Statesville Record & Landmark A site plan of the proposed high school was presented.