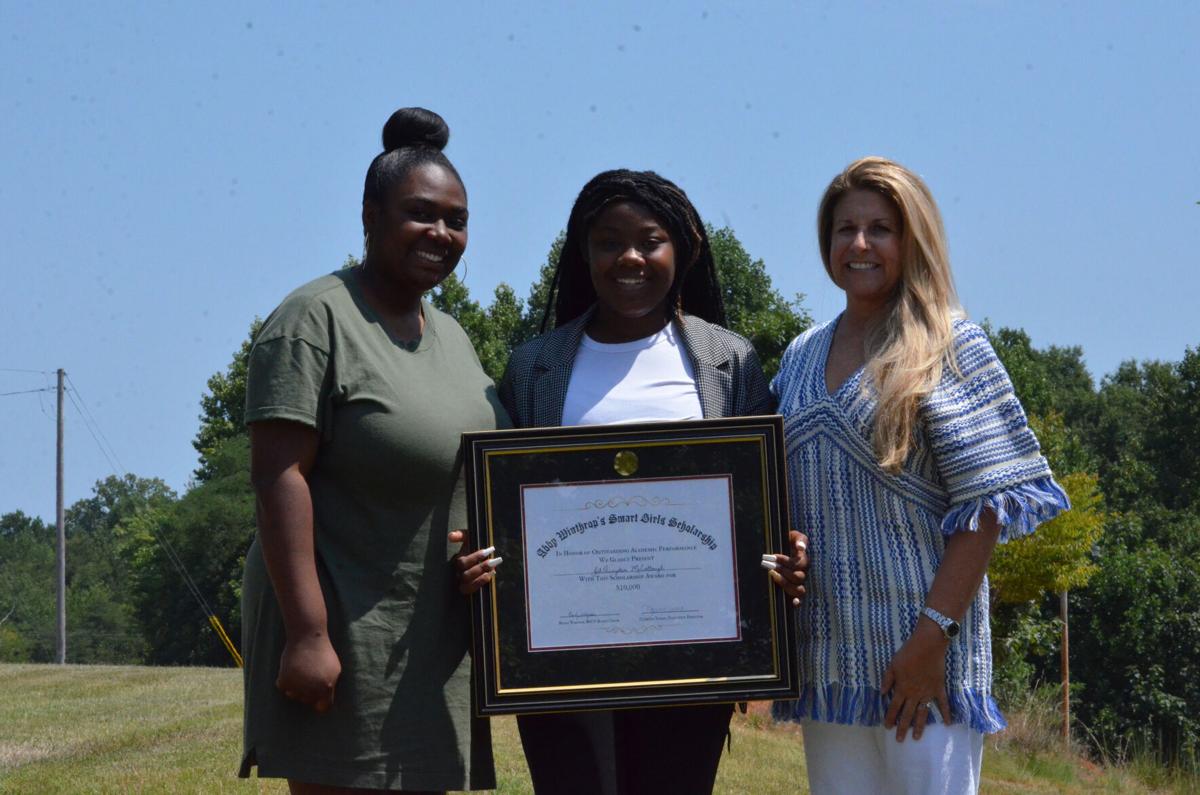 Aletha Daye, Juh’Quayden McCollough, and Vicki Winthrop pose for a photo at the Boy’s and Girls Club of the Piedmont to celebrate McCollough receiving the first Abby Winthrop’s Smart Girls Scholarship. 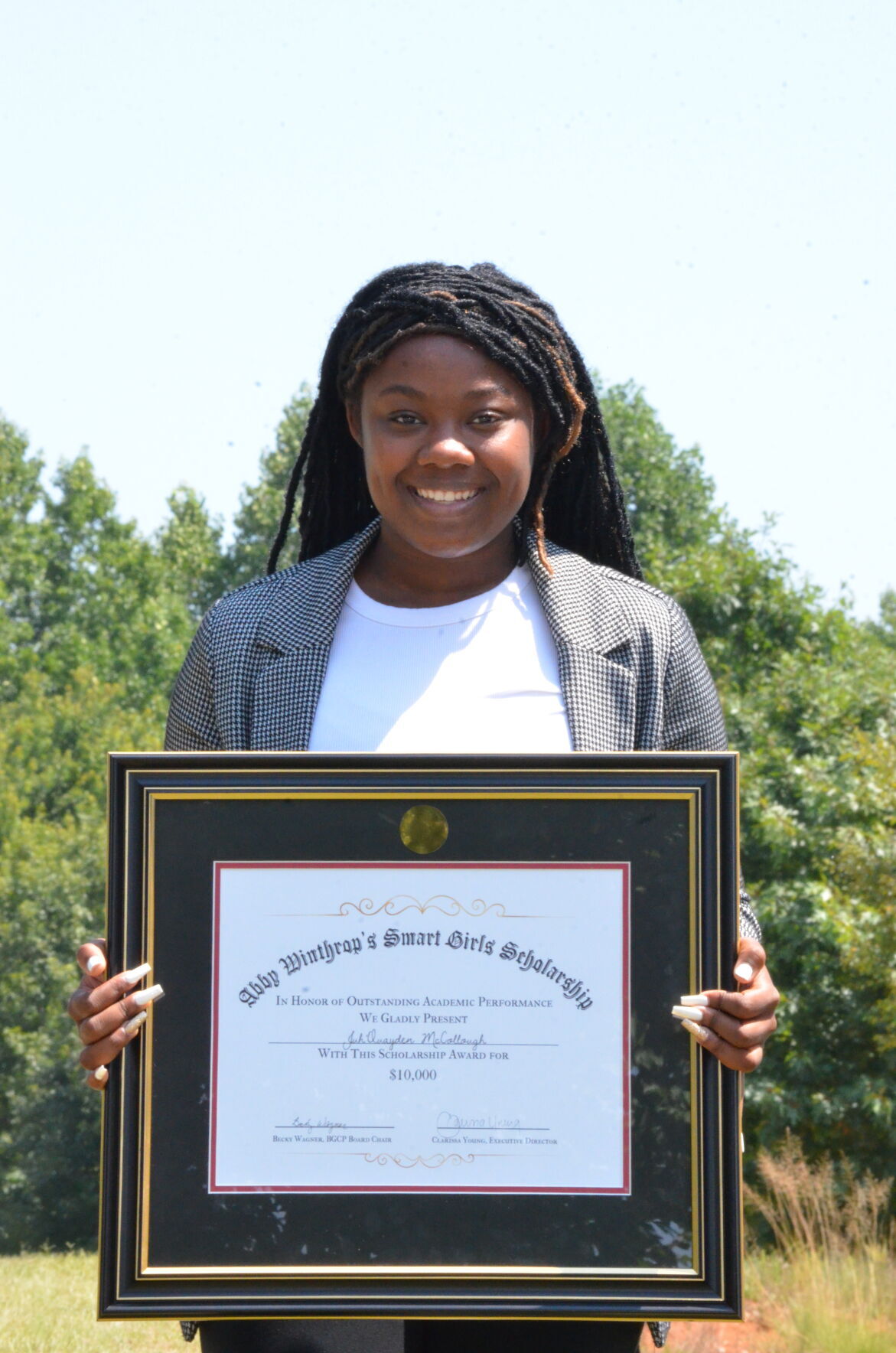 Juh’Quayden McCollough poses for a photo at the Boy’s and Girls Club to celebrate receiving the first Abby Winthrop’s Smart Girls Scholarship.

Juh’Quayden McCollough’s path to North Carolina A&T wasn’t so clear a few years ago, but even as things changed for the now-college freshman, she remained true to herself.

“I just had to be me,” McCollough said. “When I started the Boys & Girls Club five years ago, college wasn’t in my future. I don’t know how I got this scholarship, I was just being me.”

Thanks to the Abby Winthrop’s Smart Girls Scholarship, McCollough can just be herself as she studies kinesiology at N.C. A&T.

Maybe that’s just modesty, but for the 17-year old, the Abby’s Smart Girls at the Boys & Girls Club of the Piedmont had affected her in a number of positive ways, she said.

McCollough said five years ago when she began at the Boys & Girls Club she would act out and sometimes bully others, but as she got more involved with Abby’s Girls over the past two years, she put that energy into a positive direction.

“Sometimes, I would try to put this persona on, to be a different person, I was mean,” McCollough said, saying when she was first invited to join the club it wasn’t something she was interested in. However, she quickly found out it was the right place and would earn her certified nursing assistant credential while studying at Statesville High School.

She credits Abby’s Smart Girls for pushing her in the direction she is headed now.

Abby’s Smart Girls is a group for young women started by Russ and Vicki Winthrop after their daughter Abby Winthrop died in 2019 at the age of 24 while awaiting a heart transplant.

While McCollough doesn’t pinpoint any particular moment when her path toward college began, but she said she realized that many of those doors could be opened with hard work on her part.

“I kept pushing myself. I can’t stop here; there’s so much more to accomplish and so much further to go. I got to make my momma proud, and my grandmas,” McCollough said.

She said at times, she didn’t fully understand why her family and those involved with Abby’s Smart Girls were pushing her so hard. Now, she said now she understands and is proud to tell people about who helped get there.

Vicki said she was also impressed by the passion McCollough’s grandmothers had for pushing their granddaughter, as well the hard work that the Statesville High graduate had put in.

For Vicki, having McCollough be the first student under her daughter’s namesake scholarship has been something special as well.

When the Winthrops asked Aletha Daye, the program coordinator for Abby’s Smart Girls, who should be the first girl to receive a scholarship bearing Abby’s name, there was no question who in Daye’s mind. It was the shy young girl she saw in her neighborhood who grew into a motivated and determined young woman.

“Now seeing the woman she’s grown into today, I’m so proud of her and can’t wait to see where life takes her. I know she’s going to be great in everything she does,” Daye said.

Russ said while McCollough is the first, the plan is to continue to grow the scholarship over time.

“The whole idea is to get these girls into careers and into what they’re wanting to do and to be there for them along the way,” Russ said.

The Abby Winthrop’s Smart Girls Scholarship provides financial support for members of the group after they graduate, whether it is a four-year degree, trade school or something else to prepare them for a career. In McCollough’s case, she will get $2,500 in support each school year for the next four years.

The Winthrops said that Abby’s Smart Girl is a way of honoring their daughter. With the program, Vicki said that it was something Abby would have wanted them to do because their daughter loved working with children.

“In our family, we’re about team, we don’t leave people behind and we support them all the way through to the end. That was critical for us starting this program is that we didn’t just throw money at you and drop you. It was super important for (Juh’Quayden) to know that all she had to do is pick up the phone and ask for help.”

“We were not done being Abby’s parents. We still have energy and love to give.”

Sheriff: Son charged with murder in fire that claimed his parents, brother

A Mooresville man faces three counts of murder and one of first-degree arson from a July incident in which three bodies were found after a fire on Loram Drive in Troutman.

As Gavin Schmidt and his father began moving his collection of Halloween decorations out of the house and into the driveway, cars began slowin…

Aletha Daye, Juh’Quayden McCollough, and Vicki Winthrop pose for a photo at the Boy’s and Girls Club of the Piedmont to celebrate McCollough receiving the first Abby Winthrop’s Smart Girls Scholarship.

Juh’Quayden McCollough poses for a photo at the Boy’s and Girls Club to celebrate receiving the first Abby Winthrop’s Smart Girls Scholarship.