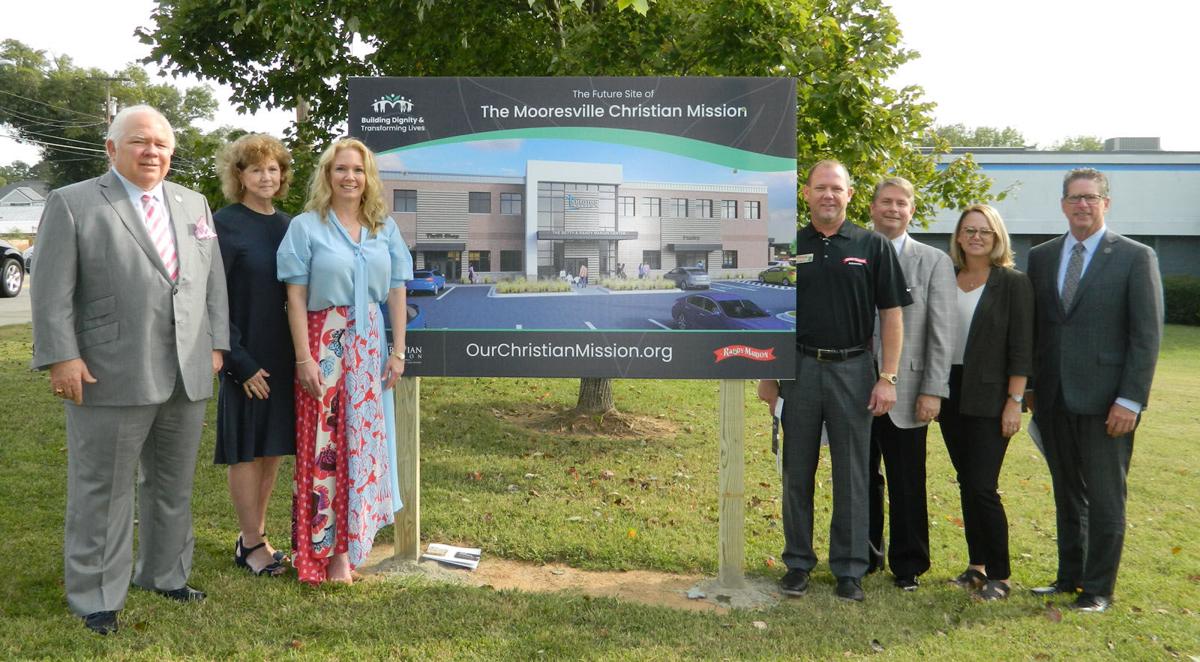 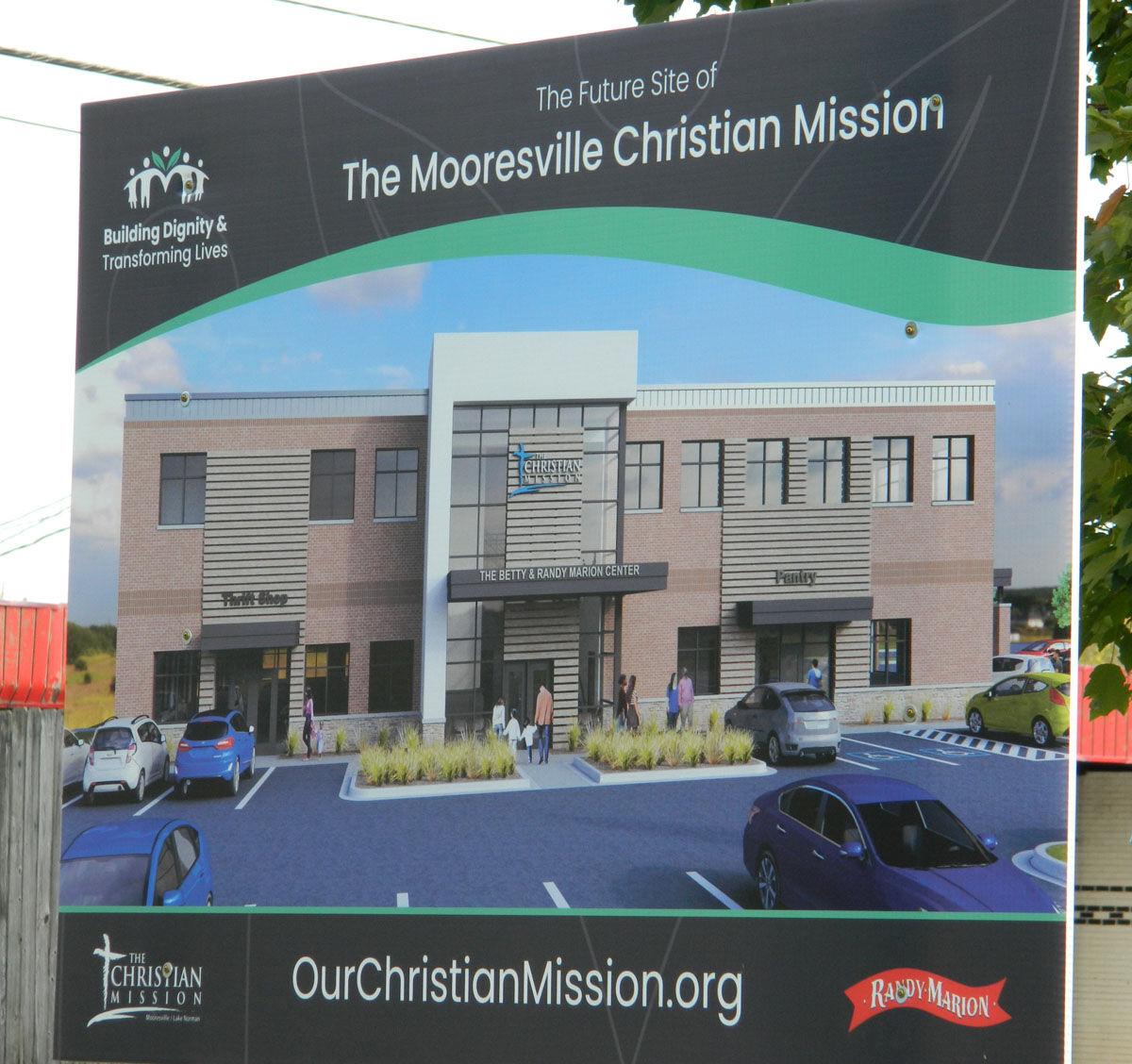 An up-close look at the future mission building planned for North Main Street.

It was a time of celebration and thanksgiving as the announcement was made of The Christian Mission’s $5 million capital campaign to raise funds needed to build a new facility in downtown Mooresville.

A group gathered Friday on North Main Street at the future site of the new facility, which will be named the Betty and Randy Marion Center, in recognition of a $500,000 lead naming gift from the Randy Marion Automotive Group.

Amy LaCount, executive director of The Christian Mission, shared that to date, “we have raised just over $1 million out of the $5 million needed and are pleased to recognize the Marion family for their outstanding leadership gift. You have helped us get to this point today.”

The new facility will be built on an outparcel in downtown near Food Lion at 971 N. Main St., Mooresville. The Christian Mission has been working since mid-2020 to identify land suitable for the new facility that would be easily accessible to the people it serves, shared LaCount.

The land is currently owned by Allen and Connie Brawley, she continued as she said, “This is the Brawley’s last parcel that they are selling, and it seems that God had a special plan for it as the new home of The Christian Mission.”

As the special event began, Mooresville Mayor Miles Atkins shared that “it’s always a great day to be mayor of Mooresville, but today is an exceptional day. It’s a visionary day with the announcement of a new facility for The Christian Mission and a renewed commitment to transforming lives for the organization.”

Atkins said that during these past 18 months, many have been in need and some continue to experience that need. He noted that The Christian Mission has, for many years, been that “go-to local agency for people in need with its pantry, resource store and crisis relief services being a Godsend for those experiencing crisis.”

He also pointed out that the mission has “transformed lives through the programming focused on self-sufficiency and individual betterment helping to move people up and out of poverty.”

As he concluded, Atkins reflected on two phrases, that of “transforming lives creating lasting change for one family at a time” and the fact that this day was about “building dignity for those in need ensuring they have a welcoming space that acknowledges that asking for help is not always an easy thing for someone to do, but we all need help at some point in our lives and there’s no shame in asking for it.”

On behalf of the Marion family, Jennifer Marion Mills expressed her excitement for the day and being there to “celebrate as we launch this new facility and we kick off our fundraising efforts to make this a reality.”

Sharing a point of history, Mills said The Christian Mission “has been here for 80 years helping people in need during some very challenging times from World War II to where we are today coming through to the end of a pandemic.”

Mills said her parents have both been avid supporters of The Christian Mission and her mom has volunteered there for many years as well. Therefore, when asked if the family would continue to support the mission and this new facility launch, she said, “It was a natural fit and an easy yes” for the Marion family.

Both Betty and Randy grew up in Charleston, West Virginia, Mills said, and they all attended the Charleston Mountain Mission Church founded by Randy’s grandfather. The church, Mills noted, “also had the welfare department, which was the mission side of the church. So he grew up from a very early age understanding the importance of helping those in need.”

Mills encouraged everyone there and in the community to realize the importance “for all of us to jump in and financially support this mission to make it our future” as she said, “this is our organization. It is all of us. And I believe in all of you and I believe in our community that we will all rally behind this effort to make it a tremendous success.”

Thanking the Marions for their “stellar involvement in the project,” LaCount thanked them on behalf of all at the mission.

Noting some of the difficulties the mission has been through during the past years, including the loss of their longtime leader, a pandemic, and learning that their building would be sold all the while continuing to serve those in need, LaCount said, “this type of challenge would fell many less stout organizations, but not The Christian Mission. The Lord is by our side and out of such challenges come tremendous opportunities. Through much hard work, we now have a renewed vision, a strong strategic plan and with the help of the community and members like the Marion family, we have begun to gather the resources needed to make the dream before you a reality.”

In a release, it was noted that the new two-story, 20,000-square-foot facility would house the organization’s food pantry, resource store and warehouse on the first floor, with expanded community meeting space, offices for case management and a computer lab on the second floor.

“We are excited to be creating a purpose-built facility that aligns to the needs of the community and our service model,” continued LaCount. “Having this new facility will enable the mission to significantly expand its self-sufficiency services, while still continuing to provide crisis assistance. We are building dignity and transforming lives with this effort for people experiencing the greatest need in our community.”

As the special event concluded, LaCount recognized additional people who were in attendance including The Christian Mission board chair Kevin Young, who she said, “dove into this headfirst and has spent many, many hours helping us, guiding the way.” She also thanked each board member who all, she said, have contributed to the campaign totaling over $300,000 along with the parishioners of St. Therese Catholic Church, who as part of their 75th anniversary have given a generous contribution to the campaign.

The Christian Mission is in the midst of fundraising efforts to raise the money needed to complete the project, it was shared in a news release. Gifts of support from individuals, businesses, foundations, civic groups and churches will be sought to make the project a reality. Naming opportunities aligned to components of the facility, including the Greeting Center, Community Center, Pantry and Resource Store, remain open.

The news release continued by noting that the mission was founded in 1939 and is dedicated to giving hope, resources and life skills training to Mooresville’s poorest families. Each year, the organization serves more than 4,000 individuals in the Lake Norman area, providing opportunities and resources that help satisfy immediate needs like food, clothing, utility and housing assistance. More than a handout, the Christian Mission seeks to be a hand-up to families in need. The organization coordinates with other local agencies and churches to provide client assistance and maintains a relational database.

The organization aims to close on the North Main Street property by the end of the year. They expect to break ground by mid-2022, with the facility opening sometime in 2023.

Watch Now: US Postal Service first-class mail is about to get slower

Watch Now: US Postal Service first-class mail is about to get slower

A Claremont man was killed in a wreck Saturday on N.C. 150 at Pinnacle Lane near Mooresville.

Seven candidates will vie on the Nov. 2 ballot for two seats on the Mooresville Graded School District Board of Education. Incumbent Greg Whit…

A Mooresville man wanted on warrants from Cabarrus County was arrested Monday after a stop by an Iredell County sheriff’s deputy, Sheriff Darr…

The Lowe’s YMCA’s Lightning swim team has been selected as the NC Swimming Club of the Year for 2021 Small Team Division. This marks the secon…

An up-close look at the future mission building planned for North Main Street.