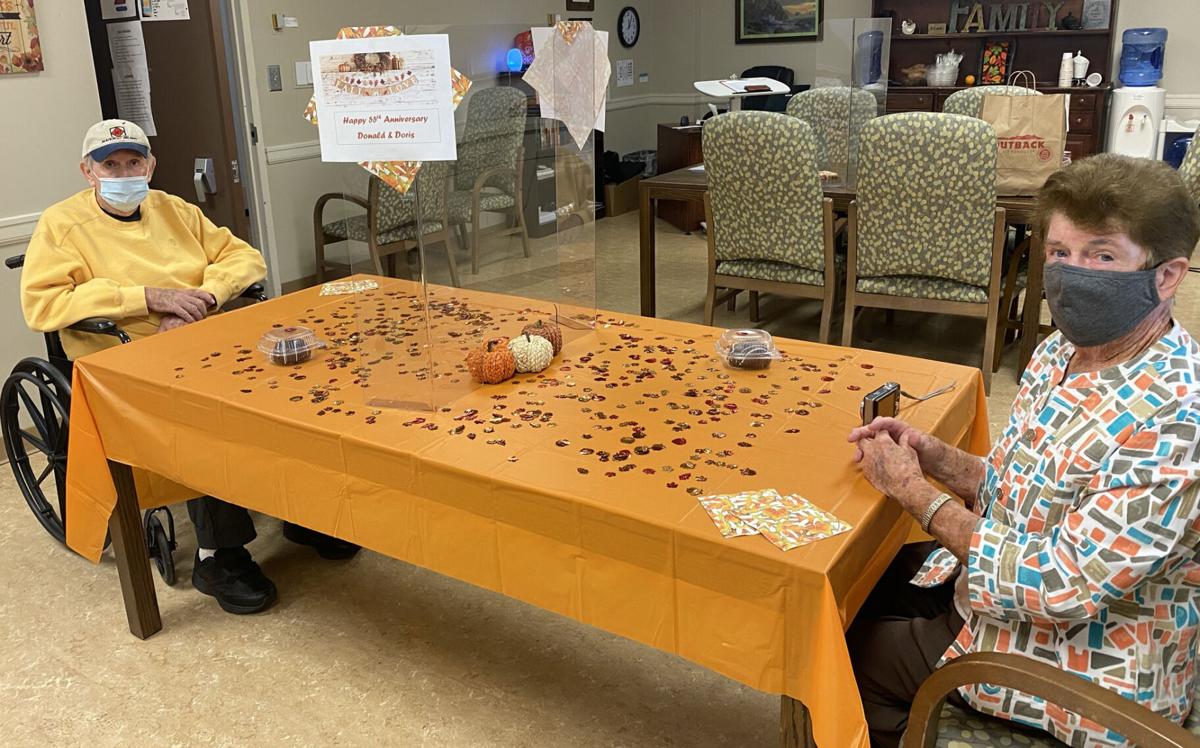 The anniversary couple was treated to a meal at the skilled nursing facility for the special occasion. 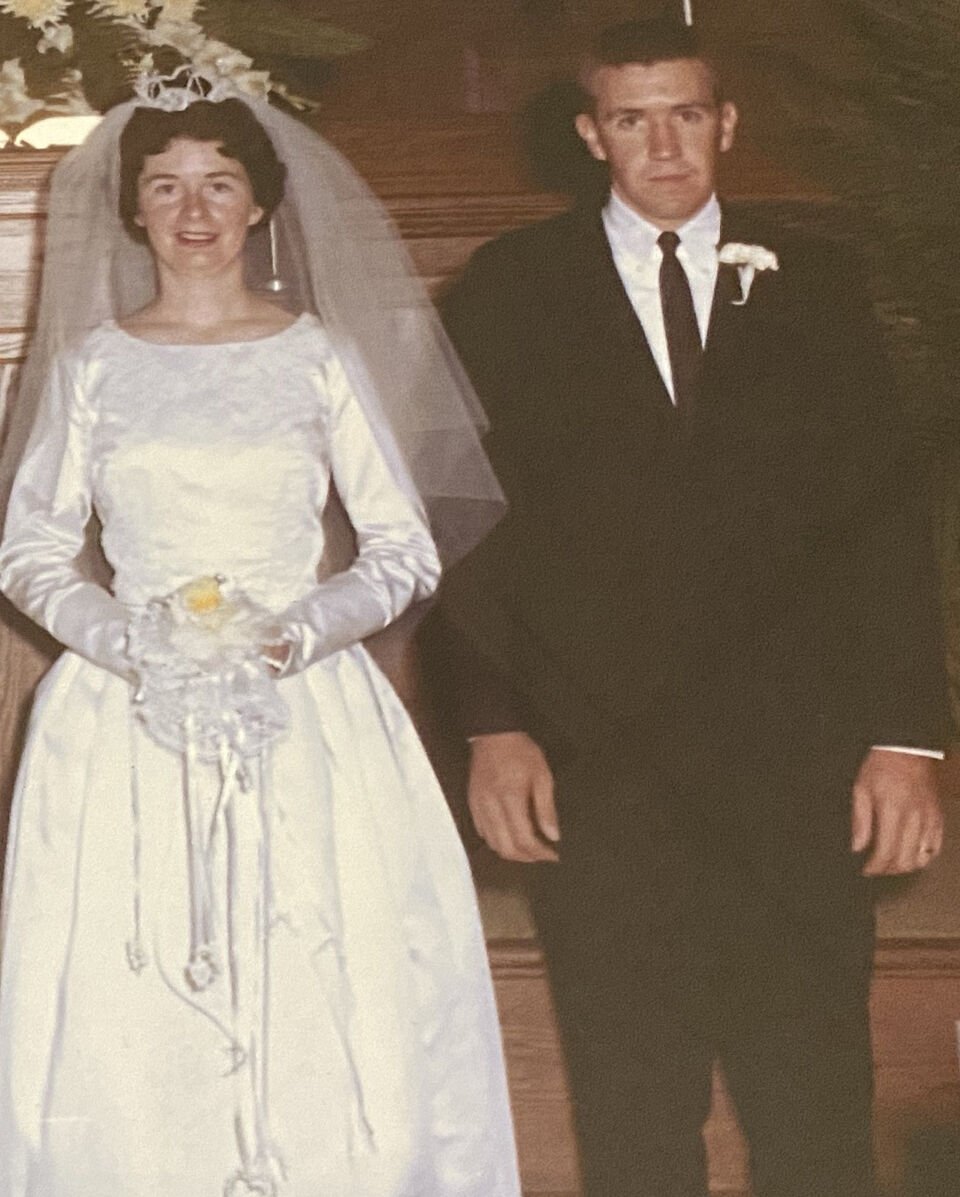 Doris and Donald Eades on their wedding day in October, 1965.

When Donald and Doris Eades looked forward to celebrating their 55th wedding anniversary this year, they didn’t imagine how different it would be. As a resident at Iredell Health System’s hospital-based skilled Nursing Facility (SNF), Donald wasn’t able to take his wife out to dinner like he always has. Instead, the two sat six feet apart at a table decorated in their honor in the facility’s day room, enjoying a meal that they’ll remember for years to come.

While this year’s anniversary meal was certainly a drastic change from their traditions, they are grateful for the staff that continuously goes above and beyond to make Donald’s unexpected stay at the SNF as comfortable as possible, including helping the couple celebrate the special occasion during trying circumstances.

“This year is very different” Doris said. “They’re very nice people and go out of their way to do things for other folks — that’s what Donald and me always try to do too. We appreciate anyone who does anything for us.”

Doris grew up in Iredell County and went to Celeste Henkel, and Donald was raised in Catawba County, just a few miles down the road from where the couple now lives near Sherrills Ford.

The couple met in the fall of 1960 while both working at Troutman Shirt Factory. Their first date was set up by the girlfriend of Donald’s cousin — a double date — and the two continued to date for another five years before finally tying the knot.

They were married in a double wedding with Doris’s sister and husband on Oct. 9, 1965 at Beulah Baptist Church on Old Mountain Road in Statesville.

Their wedding was simple, Doris said. She made her and her sister’s wedding dresses, and Donald’s $30 suit came from Efird’s Department Store in Statesville.

“It was all we could afford,” she said.

They honeymooned for two nights in Asheville, and then headed home so Donald could return to work. One year later, they celebrated their anniversary with the first piece cut from their 3-tiered wedding cake, saved from their special day.

As the years progressed, Donald and Doris’ family grew and they welcomed two sons, David and Darin. While Donald spent more than 29 years working for Duke Power, Doris opted to be a stay-at-home mom until the kids were older.

“That worked out really good, for her to be able to stay at home and take care of stuff around the house while I worked,” Donald said.

“He never minded that I wasn’t working,” Doris said, reflecting on others she knew who weren’t fortunate enough to be able to stay home with their children.

Now the grandparents of two, Doris is 79 and Donald will be 81 at the end of this month. They have many fond memories of their time together, including spending Doris’s 70th birthday doing a one-mile hike along the Appalachian Trail, and fulfilling a lifelong dream to travel out west once their youngest son left home for college.

“We took 19 days and finally went. We went all the way out to the Dakotas and Montana, back down through Nevada and New Mexico and Texas,” Doris said. “We bought a new truck that had a camper on the back of it. Some nights we camped in the back of the truck, some nights we stayed in a motel, and we stayed at campgrounds in camper cabins a couple of times.”

As they reflected on their marriage and what’s made it successful, both agreed it all boils down to commitment, trust and respect for each other.

“I wouldn’t have gotten married if I didn’t plan to stay married,” Donald said. “I made a very good choice.”

“I’ve never wanted anything different,” Doris said. “If I had to do it over I would do it over the same way.”

Three charged in robbery of two stores in Mooresville

Two men and a woman from Statesville were arrested in connection with two armed robberies early Friday morning in Mooresville.

At the Oct. 8 meeting of the Exchange Club of Mooresville-Lake Norman, Karen Fisher (left) received a Distinguished Club Secretary Certificate…

Teen captured after chase, charged with 11 counts of breaking into vehicles

As I walked through the unoccupied jail cells, every step was accompanied by the crackle of decades of dried paint that had sloughed off the walls and ceiling and fallen to the ever-deteriorating tile floors. The years untouched left layers of dust, dirt and pulverized paint thick enough to leave footprints in as I paced from one cell block to the other.

The following deeds were filed in the Iredell County Register of Deeds office from Oct. 1-7. For more information regarding specific plots of …

The anniversary couple was treated to a meal at the skilled nursing facility for the special occasion.

Doris and Donald Eades on their wedding day in October, 1965.