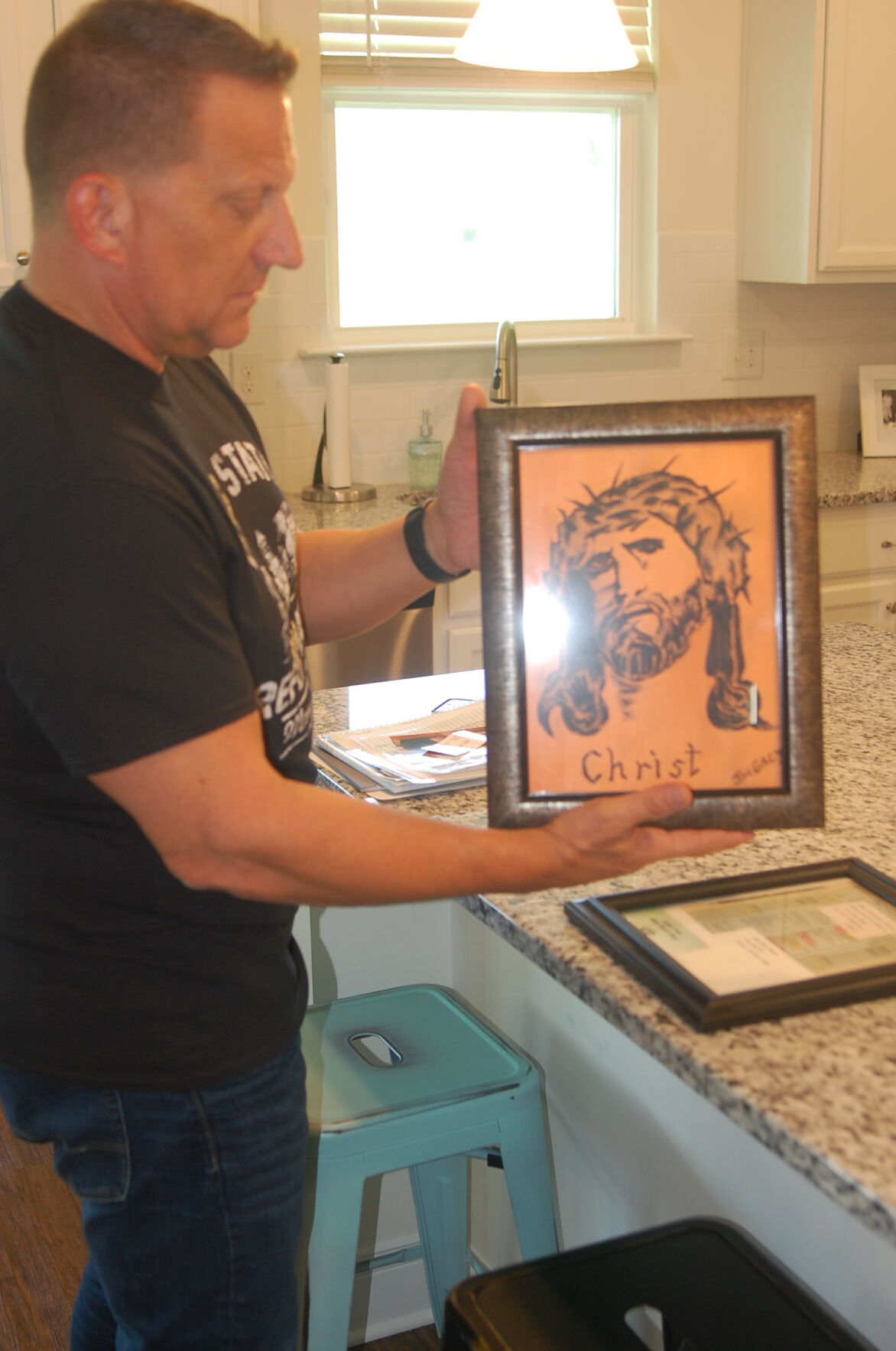 Phil Chalmers holds a painting of Jesus that was given to him by serial killer John Wayne Gacy. 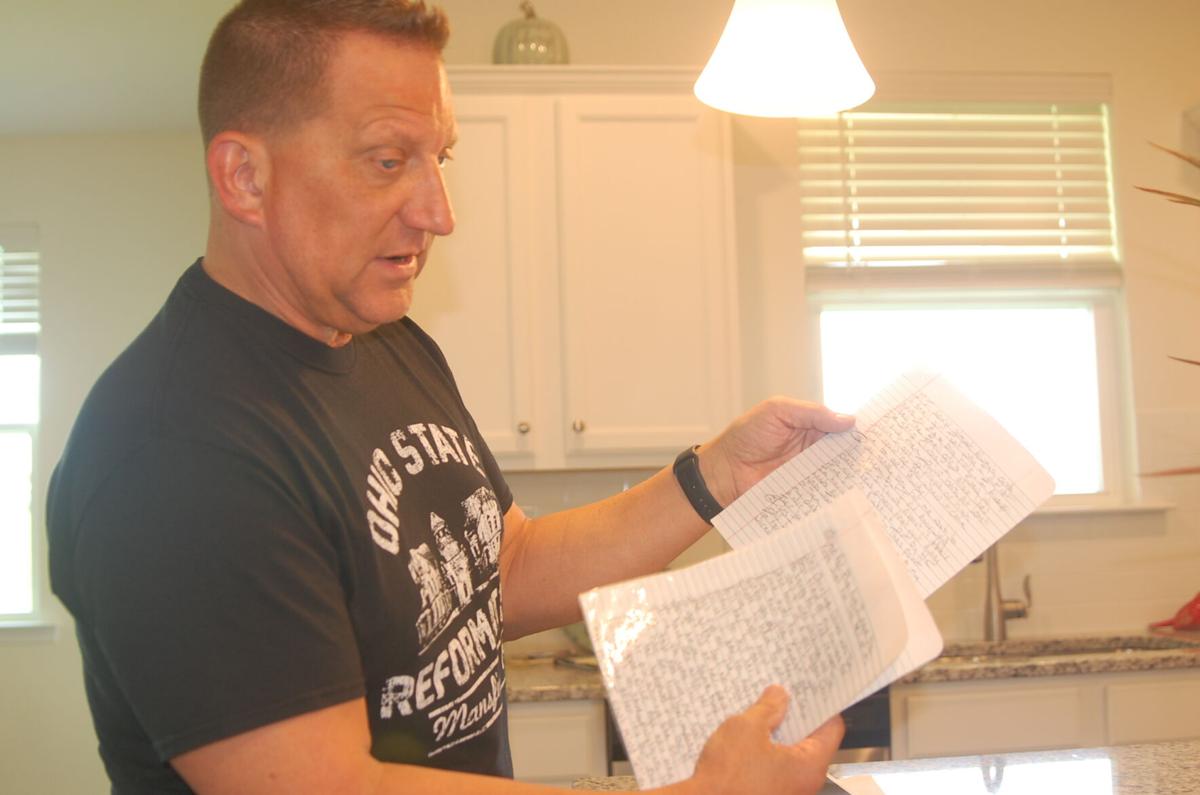 Phil Chalmers reads from a letter sent to him by a serial killer. 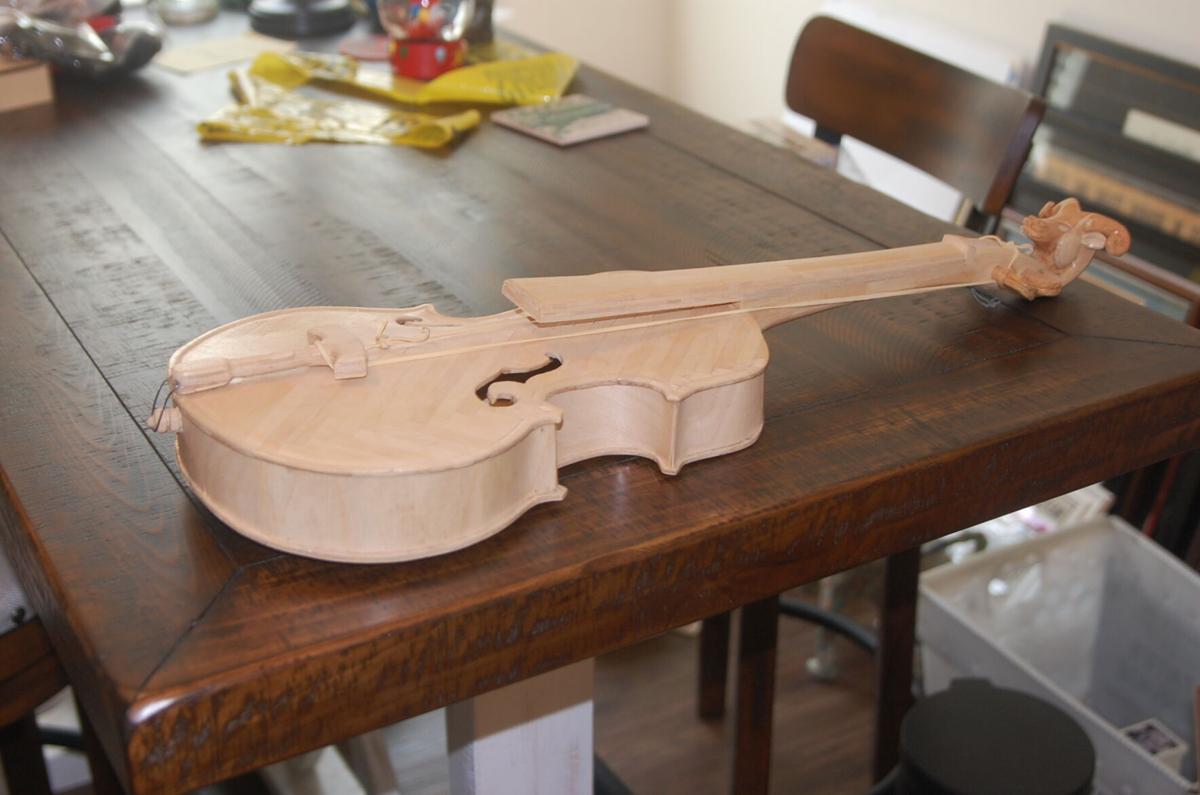 This violin, made from sticks, was given to Phil Chalmers by one of the serial killers he interviewed. 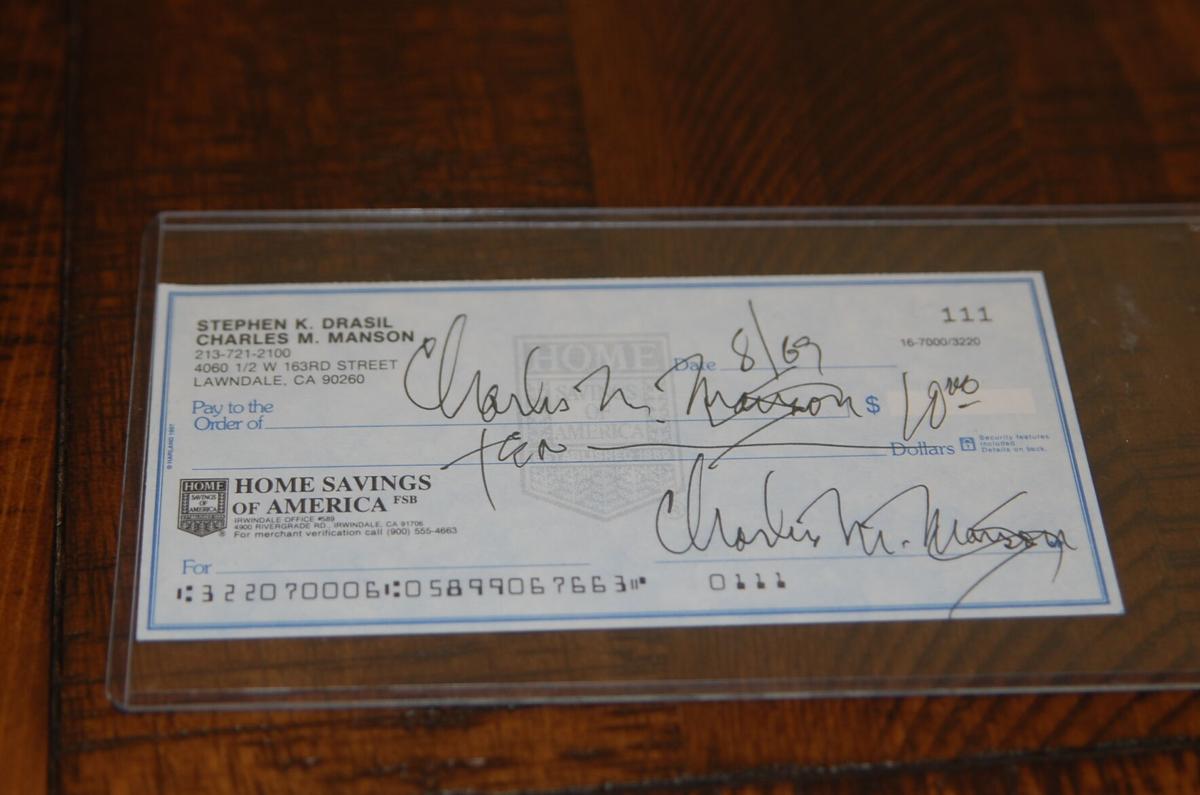 This check was signed by Charles Manson and given to Phil Chalmers. 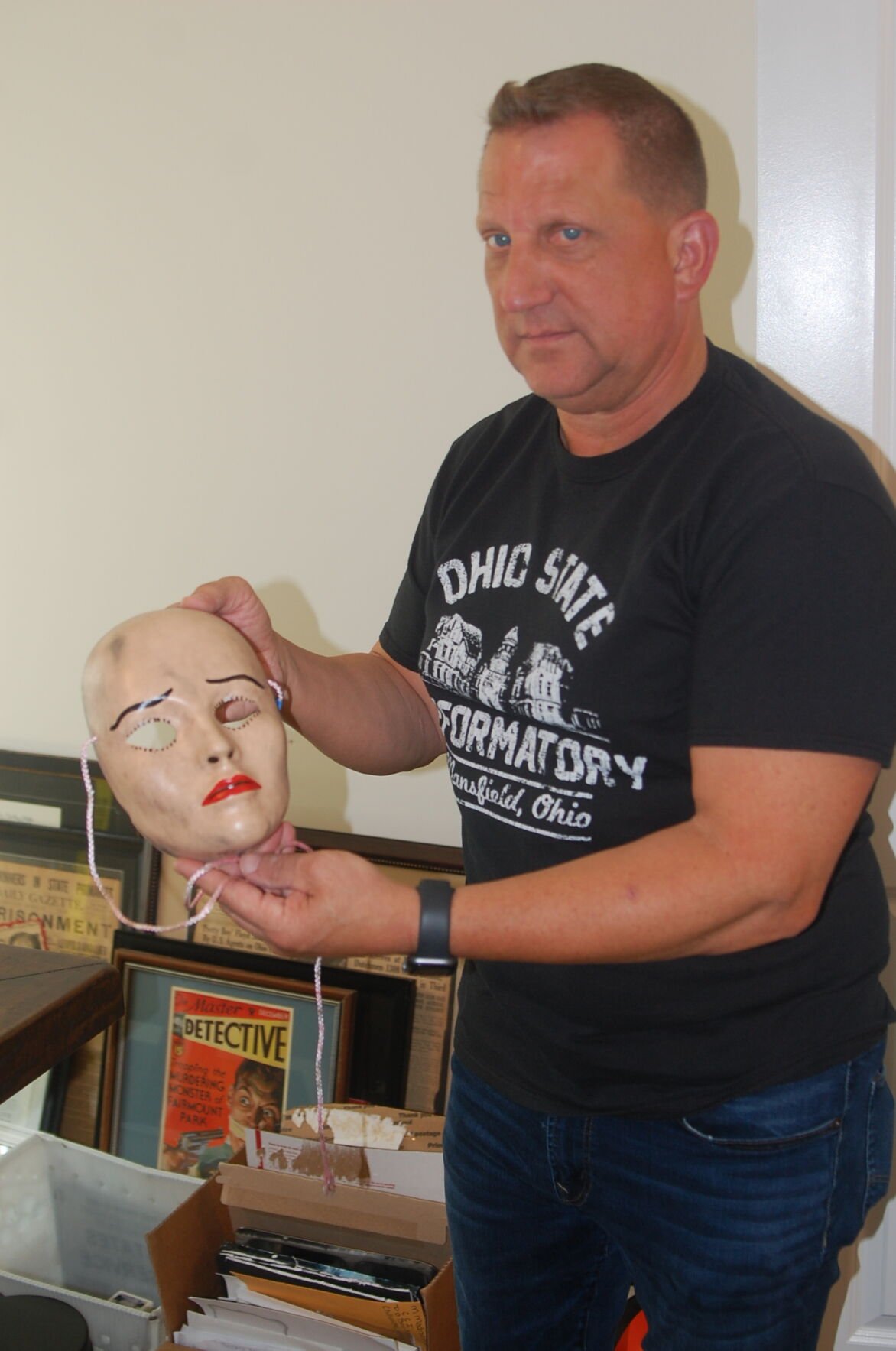 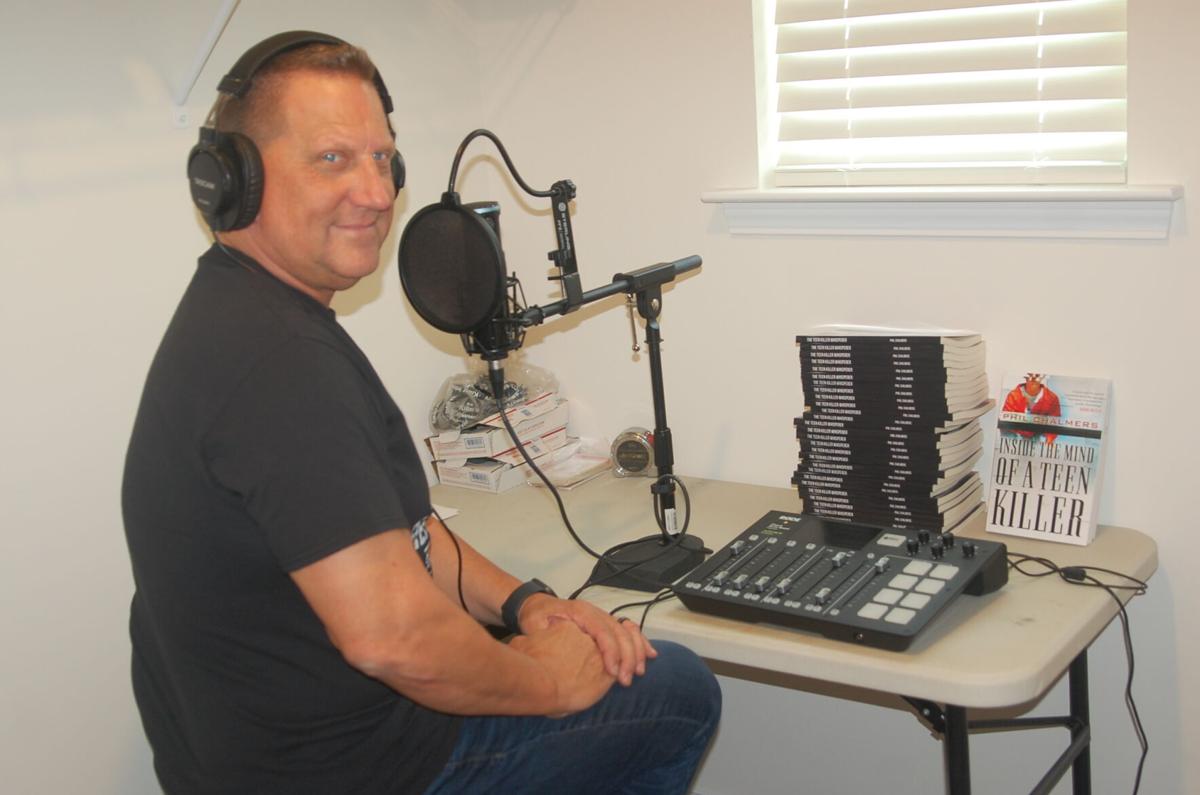 Phil Chalmers sits at the desk where he records his weekly podcast.

In an upstairs room of Phil Chalmers’ new home in a quiet Mooresville subdivision is a collection of memorabilia from a mask that belonged to the serial killer known as BTK to a framed drawing of Jesus by John Wayne Gacy.

The painting by Gacy is not the only gift from a serial killer that Chalmers will eventually have on display in a mini-museum that reflects his years of interviewing some of the more well-known killers to those who are not everyday names.

Chalmers said the museum is not one that is open to the public but one part of his years of talking to school shooters and serial killers is available for public perusal — via his podcast “Where the Bodies Are Buried.”

Chalmers admits his fascination with those many people find scary or repugnant is unusual.

A new transplant to the Mooresville community, Chalmers, a native of Cleveland, Ohio, began his career interviewing school shooters to understand their motives and look for the red flags that may have been missed. From there, he used what he learned to teach law enforcement and school administrators what signs to look for in the hopes of preventing another tragedy.

Chalmers said his desire to help teens stems from his own dysfunctional childhood. As an adult, he used his childhood experiences to develop a rapport with teens who had committed murder. From that, he moved into talking with school shooters and then, recently, into interviewing serial killers.

Like his desire to help teens in his early career, his interviews with serial killers aren’t due to morbid fascination, but with the belief that many have murdered others that were not part of the cases that landed them in jail.

“I’m hoping to get them to confess to other crimes that they may have committed to bring closure to the families,” he said.

That is the reason behind the title for his podcast — revealing where the bodies are buried.

Chalmers said he has interviewed some of the more famous serial killers — BTK (Dennis Rader), Gacy, convicted and executed for killing 33 teenage boys, and David Berkowitz, known as the Son of Sam, who pleaded guilty to eight shootings in New York. He’s also talked to many lesser known killers.

“There are about 3,400 serial killers and most people have just heard of a few,” he said.

Part of his method of getting information from these killers, he said, is developing a rapport, maybe even a friendship of a sort, with them. His motivation is to find out about unsolved murders, and if any of these killers are responsible. “There are 80,000 to 100,000 unsolved murders (across the country),” he said.

He said he relies on his own easygoing manner as well as sharing his own experience in a dysfunctional household — something he often has in common with the killers he’s interviewing. He develops a relationship with the killers to the point they write to him.

His podcast, produced from his home, seeks to peer into their minds, explore why they committed their crimes and to solve the cold cases, locate victims’ bodies to bring closure to families.

In episode one, he said, he interviewed William Clyde Gibson, a convicted serial killer currently on death row in Indiana. Chalmers said he gained a confession to an unsolved case in Evansville, Indiana, one that had remained unsolved for 20 years. No arrest has been made but the new lead is being investigated, he said.

He releases four podcast episodes per month and the podcasts are supported and sponsored by Apple Podcasts and IHeartRadio. He also has a fan club, MyFriendsAreMonstersFanClub.com, that allows listeners to join and hear the unedited, uncensored and uncut interviews, download copies of letters from serial killers to Chalmers and look at the artwork from killers such as Gacy.

Chalmers said he hopes his interviews and the podcasts will clear some of those thousands of cold cases, and in the end, help victims’ families find out what happened to their loved ones.

If someone had told Randy Marion in September 1990 that, 30 years down the road, he would be standing in the pristine showroom of a Cadillac d…

Friends, strangers rally around a popular postal carrier as he recovers from a stroke

Almost anyone who knows Fred Lewis refers to him as their best friend.

From the start, new season kicks off for area NFL product

One person killed in overnight wreck in Mooresville

One person was killed early Friday morning after a vehicle struck a utility pole on Oak Tree Road in Mooresville.

Phil Chalmers holds a painting of Jesus that was given to him by serial killer John Wayne Gacy.

Phil Chalmers reads from a letter sent to him by a serial killer.

This violin, made from sticks, was given to Phil Chalmers by one of the serial killers he interviewed.

This check was signed by Charles Manson and given to Phil Chalmers.

Phil Chalmers sits at the desk where he records his weekly podcast.