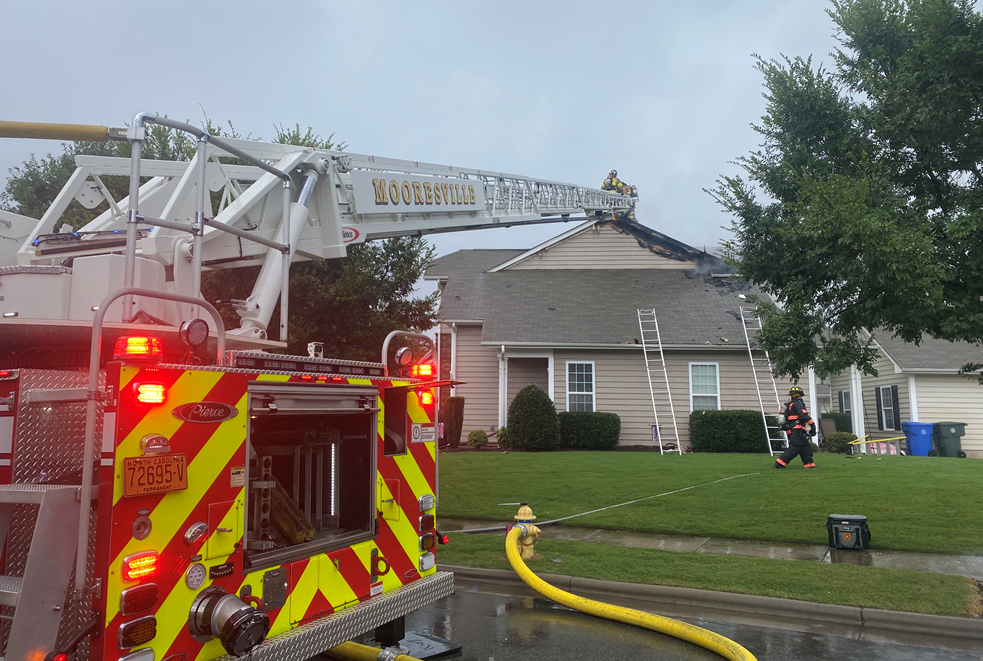 A ladder truck is used by fire departments to help extinguish a fire on Leyton Loop in Mooresville on Monday. 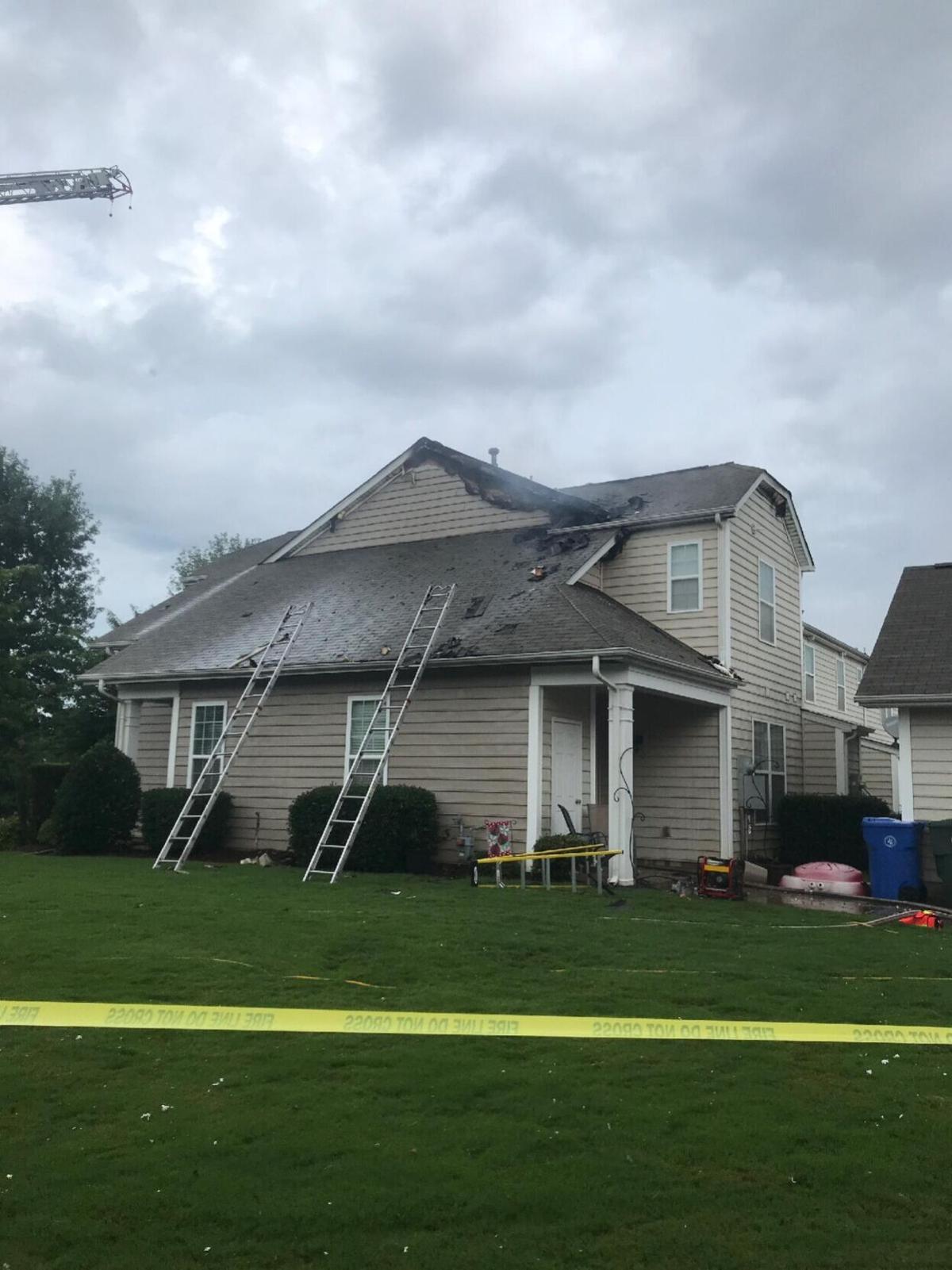 A house was damaged by a lightning strike on Leyton Loop in Mooresville on Monday.

Lightning strikes kept firefighters in Mooresville busy on Monday, with one starting a fire.

Lightning earlier in the morning had triggered multiple emergency calls after four homes were struck, but no fire damage or significant structural damage was found by firefighters. However, another strike started a fire at a home in the Waterlynn subdivision around 10 a.m.

"The 10 a.m. fire was quickly reported by eyewitnesses which is the first direct contributing factor to the fire department’s ability to control and extinguish the fire. Too often homeowners or witnesses try to 'take matters into their own hands' and delay calling 9-1-1 to report an emergency. In this case, the fire department was called soon after the event happened which lessened the overall damage," Mooresville Fire Marshal Geoff Woolard said. "While lightning did strike the roof and attic, fire could have spread through the living spaces and into other homes. This is the primary reason fire officials on the scene requested a 'Second Alarm' to bring more personnel to the scene to perform searches of the attached homes to ensure there wasn’t fire or smoke spreading from the original home."

According to Mooresville Fire-Rescue, nearly 40 firefighters were involved with the containment of the fire due to concerns about it spreading to adjacent homes. It took nearly an hour for Mooresville, Shepherds, Mount Mourne and South Iredell volunteer fire departments to extinguish the blaze. Iredell County EMS was on hand as well.

Investigators confirmed the cause of the fire was due to a lightning strike based on eyewitness accounts and observations at the scene. An estimate of the damage was not available.

"The earlier lightning strikes did not result in a fire condition. This could be the result of many factors including not a 'direct strike' meaning the main energy actually impacted in the vicinity of the homes but not directly on/at the house," Woolard said. "A lightning bolt is estimated to reach 50,000 degrees Fahrenheit so, if it directly contacts a building or other combustible object, fire damage is almost inevitable."

According to lighningsafety.com, about one out of every 200 houses will be struck by lightning every year.

Woolard said there's not much people can do to deter lightning strikes from their homes. He said the elevation of the home, the environment around the house, and the unpredictable nature of weather are some of the factors that can’t be controlled.

He said power surges from lightning strikes are more common problems with severe storms or those with a greater amount of electrical activity. Woolard said a whole-house surge protection system is one method that can be incorporated into a home to deal with surges. He said another option is investing in a lightning protection system which consists of lightning rods (called air terminals), conductors, and ground terminals to move the electrical energy away from the structure to a direct path to the earth. He said a licensed electrician can help a homeowner understand these systems and the costs involved with installing them.

He said it's also wise to have appropriate homeowner’s insurance to cover not only the structure in case of damage but also protecting against loss of contents. For renters, he stressed having a renter’s insurance policy to protect belongings because although the property owner may have coverage, it won’t extend to personal property.

A crash involving a tractor-trailer has three lanes of Interstate 77 north blocked near the 32-mile marker in Mooresville.

The following persons registered for assumed names in the Iredell County Register of Deeds office from Oct. 8-14.

The Mooresville High School marching band was able to practice last week for the first time this school year. The band practiced outside of th…

A ladder truck is used by fire departments to help extinguish a fire on Leyton Loop in Mooresville on Monday.

A house was damaged by a lightning strike on Leyton Loop in Mooresville on Monday.