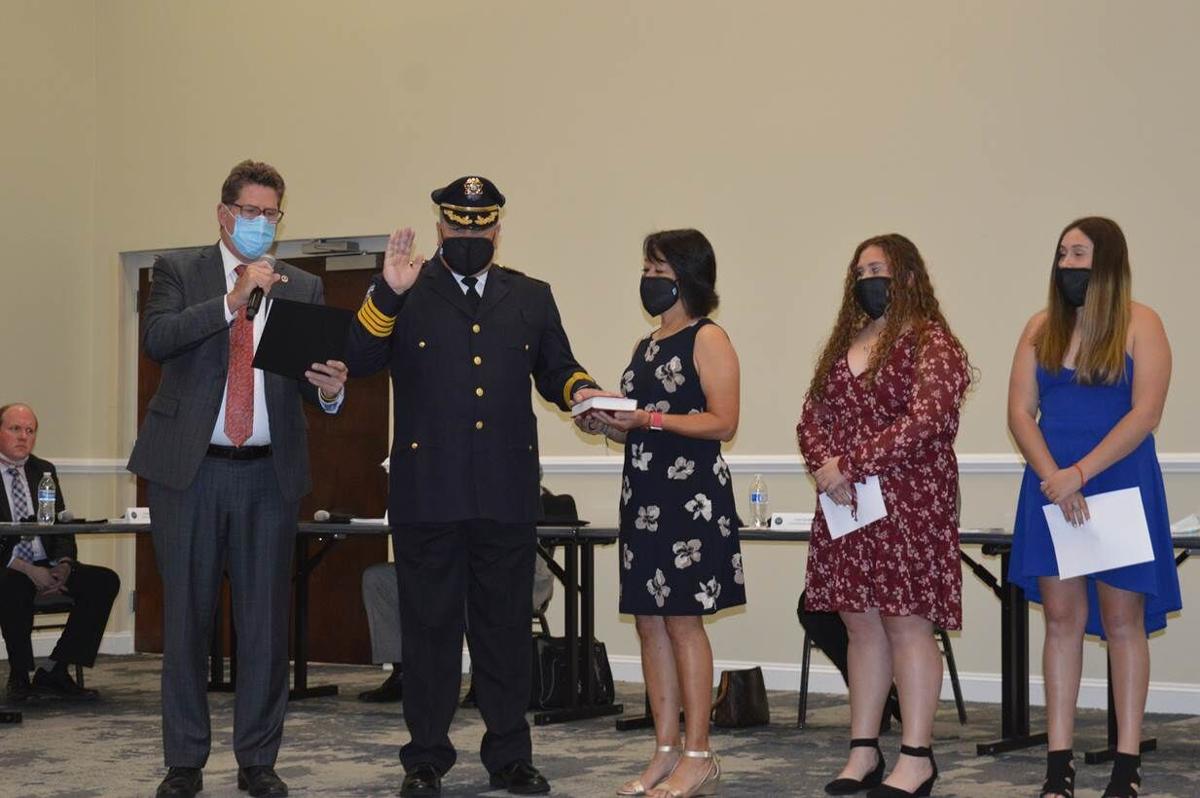 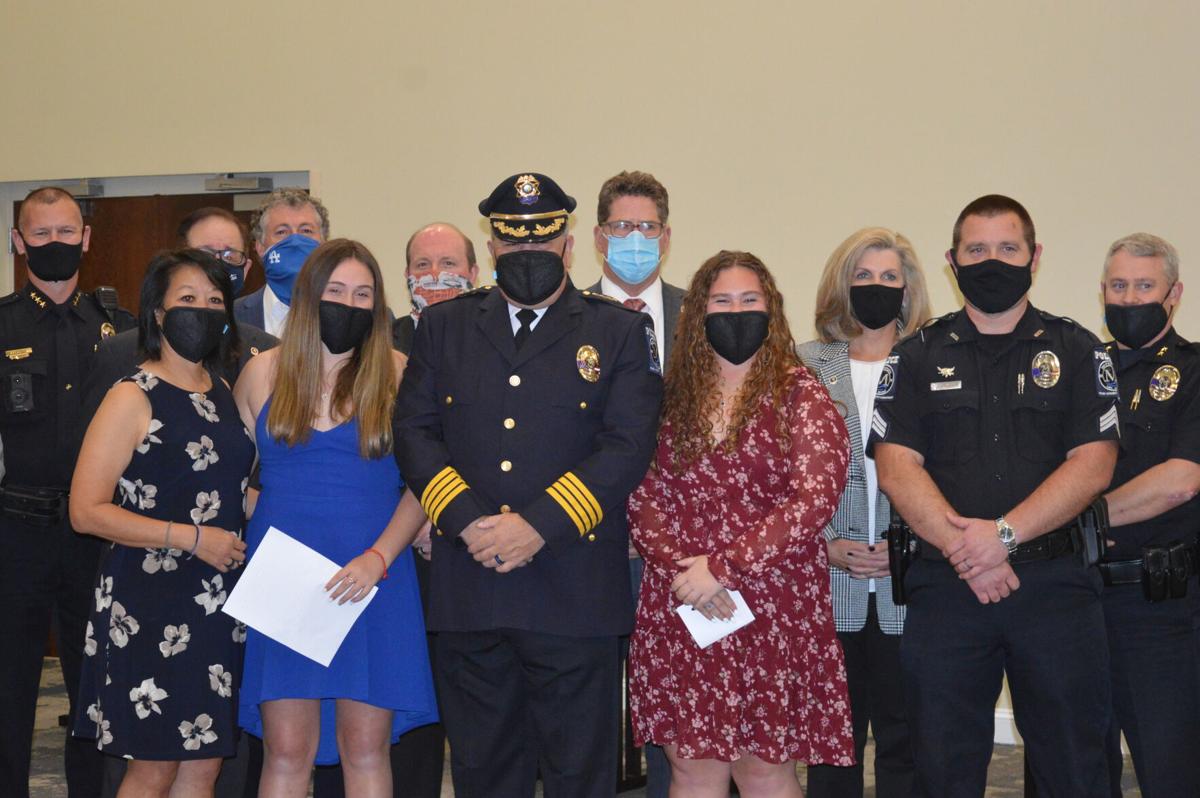 Mooresville Police Chief Ron Campurciani was sworn in with his wife and daughters by his side during Monday’s Board of Commissioner’s meeting.

Mayor Miles Atkins presided over the swearing-in ceremony with Campurciani’s wife Delilah Campurciani holding the Bible and later pinning her husband’s badge on his uniform.

Campurciani first served as acting police chief in June 2019 and was named to the position permanently last December. Town Public Information Officer Kim Sellers said Campurciani, who came to Mooresville from Massachusetts, needed to gain North Carolina certifications before officially being sworn in.

Campurciani was initially named to serve in the acting role during an outside investigation by ISS Agency concerning a hostile work environment complaint at the department that later led to the resignation of then Police Chief Damon Williams.

Campurciani has 36 years of law enforcement experience and most recently had retired as police chief in West Springfield, Mass., in 2018, Atkins said. After his retirement, he became the executive director of the Western Massachusetts Chiefs of Police Association. “The chief has had a storied career in law enforcement,” Atkins said.

Early in his career, Campurciani was assigned to a DEA task force where he went undercover traveling across the U.S. and abroad infiltrating outlaw motorcycle gangs, traditional organized crime groups and terrorist organizations, Atkins said. Throughout his career, Campurciani has also served as a special response team commander, an officer in charge of the narcotics unit, the commandant of the regional police academy and head of internal affairs, Atkins said.

Campurciani attended Western New England College, where he earned a bachelor’s degree in law enforcement and a master’s degree in criminal justice administration and is a graduate of the FBI National Academy, Atkins said.

“My dad is one of my role models …” said daughter Kayce Campurciani in a speech after her father’s swearing-in ceremony. “Dad, I just wanted to thank you for taking this job. Thank you for doing this so not only my future is going to be better but so the town of Mooresville’s future will be even better than it is right now.”

Daughter Meadow Campurciani said she knew the Mooresville Police Department needed her dad to serve as police chief and thanked him for everything he has done for her and the people of Mooresville.

“If you were to go up to my dad and thank him for anything, no matter how big or how small, he’ll just shake it off,” said Meadow Campurciani. “My dad has never accepted any recognition in his life and one night I asked him why. He said he shouldn’t be getting praised for something he was hired to do. Although that statement may be true, I believe my dad deserves all the recognition in the world.”

Fire Station 6, a 12,000 square foot-facility, will be built in the Mooresville Business Park on N.C. 801, said town Facilities Director Chris Wyckoff. The project is shovel ready and the two-bay fire station will have living, kitchen and sleeping quarters, training and learning space, and will initially be home to one ladder company with the plan to eventually house 25 firefighters a day and a battalion chief, Wyckoff said. The construction of the new fire station should take 425 days, he said.

The new 49,000 square-foot police station will be centrally located at West Wilson Avenue and U.S. 21 and will replace the current one on West Iredell Avenue that, at half the size of the proposed station, is too small to fit the growing needs of the police force and the town of Mooresville, said Wyckoff. The construction of the new police station should take 489 days, he said.

Approval of both these amendments is contingent on the bond closing package scheduled for December.

The following is a list of those booked at the Iredell County Detention Center on felony and driving while impaired charges from Nov. 19-25. T…

Hardworking, loyal, dedicated, genuine and true friend are just a few of the words that describe Ford Martin Stewart, otherwise known as “Pike…

Police: Mooresville man shot in the arm during home invasion

The Mooresville Police Department is investigating a home invasion that resulted in one person being shot.

The following deeds were filed in the Iredell County Register of Deeds office from Nov. 15-19. For more information regarding specific plots o…

The following persons registered for assumed names in the Iredell County Register of Deeds office from Nov. 15-21.