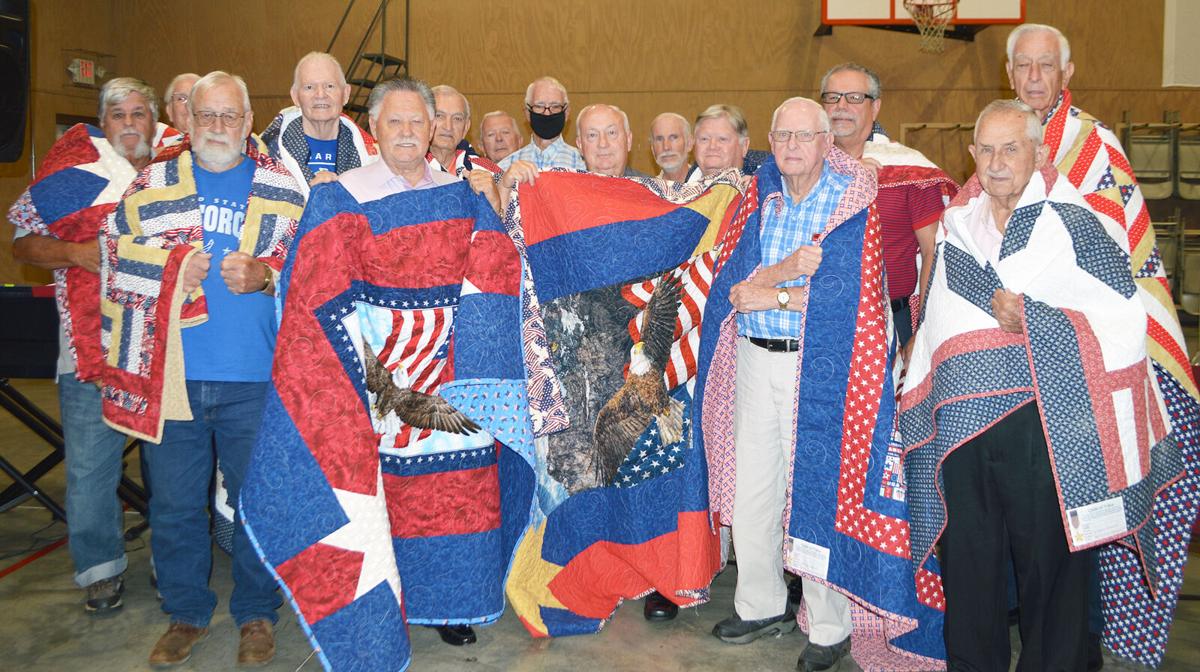 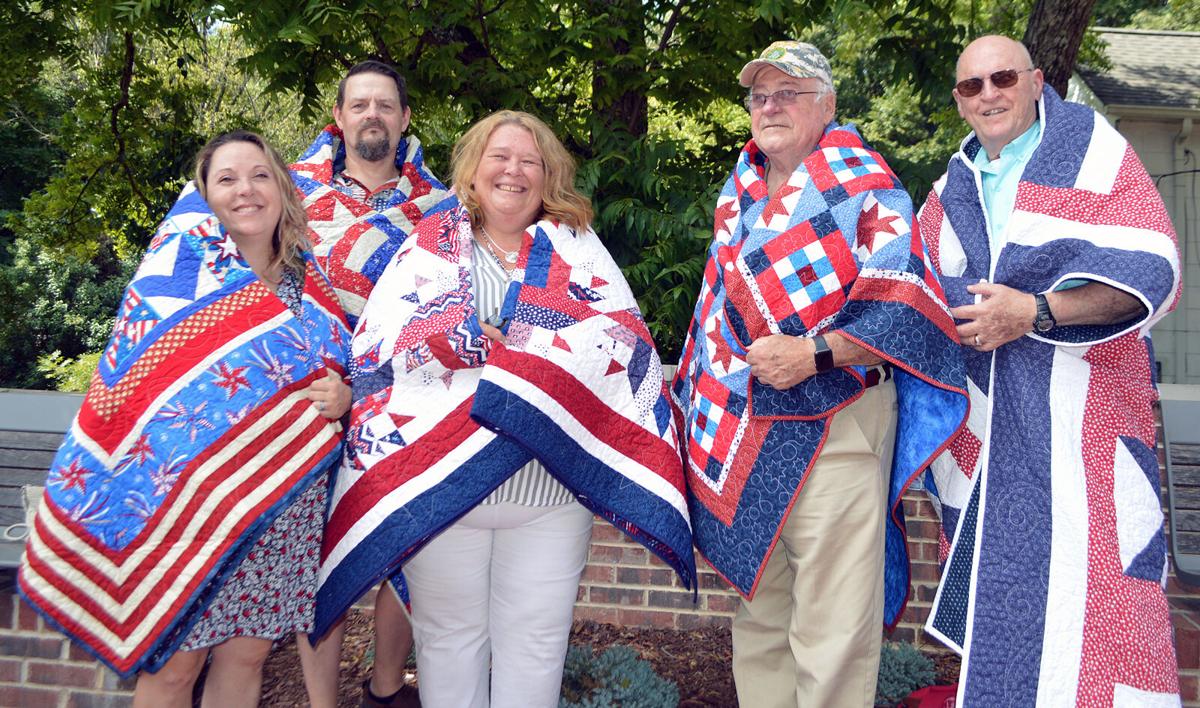 SHARON BORMANN Special to the

During two separate award ceremonies conducted in August, the local Quilts of Valor group, Grateful Quilters, presented 20 quilts to veterans, bringing the total number to 64 that have been awarded by this group since its beginning in 2019.

Sanford served in the U.S. Army from 1958-59. He was stationed at a Nike Missile Site in Northern California. Sanford received an honorable early hardship discharge when his father became seriously ill and his mom required assistance.

Hart served in the U.S. Air Force from Aug. 11, 1959 to Aug. 10, 1965. He was stationed at Shaw Air Force Base in South Carolina and Wiesbaden Air Base, Germany, serving as cartographer (mapmaker), making navigational charts for the Air Force. He graduated from the ACIC Mapping School in St. Louis, Missouri, placing in the top five of his class. He also represented Wiesbaden AFB in track and field events in interbase competition.

After leaving the Air Force, Hart graduated from Eastern Tennessee State University with a Bachelor of Science degree in engineering technology. He spent more than 20 years with Western Electric, which merged into AT&T, and retired in 1990. Hart owned and operated Advanced Technology Systems until the late ‘90s and taught in the continuing education program at Mitchell Community College for 20 years.

Michael Judd served in the U.S. Air Force from 1986 to 2008. Trained as an aircraft mechanic, his first deployment was to Panama, where he worked on C-130s. He also served as an air marshal onboard an aircraft, worked on KC-135s and deployed in support of the Panama Conflict, Desert Storm, Operation Enduring Freedom and Operation Iraqi Freedom. Often under extreme conditions, Judd supervised the aircraft mechanics and others who helped maintain aircraft in top-notch flying condition. While serving, he suffered a stroke that was attributed to stress from the job.

Sheets served in the U.S. Air Force from 1987 to 2000. She was a C-141 airdrop loadmaster instructor, stationed at McGuire Air Force Base in New Jersey and Altus Air Force Base in Oklahoma. Her most memorable mission was a medical evacuation of POW Michael Durant from Mogadishu during Operation Restore Hope.

Alecia Judd served in the U.S. Air Force from 1990 until her retirement in 2010. She was trained as an in-flight refueling specialist (boom operator) on the KC-135. During her career, Judd deployed multiple times to various locations in support of Operation Enduring Freedom, Operation New Dawn and the Gulf War including Desert Shield and Desert Storm. Due to her military service, she is now considered 100% disabled by the Veterans Administration. With a strong passion to help other veterans, Judd serves as the service officer for the local VFW, where she helps other veterans file their VA claims.

Benfield served in the U.S. Army from 1967-73. Trained in helicopters and field artillery, he served in Vietnam during the TET Offensive of 1968.

Wiley Goodman served in the U.S. Air Force from 1962-66. He was trained as an aircraft mechanic and assigned to Whitman Air Force Base, Missouri, with the 340th Bomb Wing, Strategic Air Command. Goodman also served with the 53rd Weather Reconnaissance Squadron, commonly referred to as the Hurricane Hunters.

Lee served in the U.S. Army National Guard from 1970-77, stationed in Mooresville. He received special training at the Nuclear, Biological and Chemical Defense School and worked as a demolition specialist.

Lowry served in the U.S. Army National Guard from 1972-76. He was stationed in Charlotte working as an artillery surveyor and with computers.

Mills served in the U.S. Army in 1991. He was injured during training and received a medical discharge.

Moore served in the U.S. Navy from 1966-72. Stationed in Norfolk, Virginia, he was trained to be a fireman and to manage the ship’s store. When his ship deployed to Athens, Greece, Moore said he went from the bottom of the ship to the top.

Murdock served in the U.S. Navy from 1960-62. Stationed in Charleston, South Carolina, he worked on the Polaris missiles, which were first fired off submarines in 1961.

Myers served in the U.S. Marine Corps from 1963-67. Assigned to Vietnam and Cuba, he worked with the military police and was awarded a Purple Heart.

Talbert served in the U.S. Army from 1968-71. He served in Vietnam, Fort Bragg, North Carolina, and at Aberdeen, Maryland, working in supply.

White served in the U.S. Army from 1961-65. Trained to be a crane operator, he served with engineering units while stationed in Germany and France, and in the Armored Division while stationed at Fort Hood, Texas.

Windsor served in the U.S. Navy from 1969-75 and trained in communications.

Orbison served in the U.S. Navy from 1966-68. Trained as a Marine engineer, he was assigned to Fort Bragg, North Carolina, and Fort Houston, Virginia.

The Quilts of Valor Foundation was started in early 2003 by a quilter named Catherine Roberts, whose son was deployed in Iraq as a Humvee gunner. One night Roberts had a dream where she saw her son and his fellow comrades wrapped in quilts, being comforted from the ravages of war.

With that vision and the help of a few fellow quilters, she started sewing in her living room. The first QOV was awarded to an injured veteran from Operation Iraqi Freedom in November 2003. Since that time, the mission of QOV has evolved to include all active-duty members and veterans of our armed forces who have been touched by war.

There are now QOV chapters in all 50 states with Grateful Quilters of Mooresville being one of those chapters. Sharon Bormann serves as the group leader.

In making the presentation of the quilts, it is noted to the recipients that “the quilt brings the veteran a three-part message: “first, we honor you for your service in our armed forces. We honor you for leaving all you hold dear to serve in time of peace or conflict; secondly, our quilters realize that freedom is not free. The cost of our freedom is the dedication of men and women like you and this quilt says thank you for your sacrifice and your willingness to lay down your life for our country; and thirdly, this quilt is meant to comfort you as you are forever in our thoughts and our hearts.”

Gregg Richardson of Mooresville tried his luck on a Cash 5 ticket and won last Friday’s $263,948 jackpot.