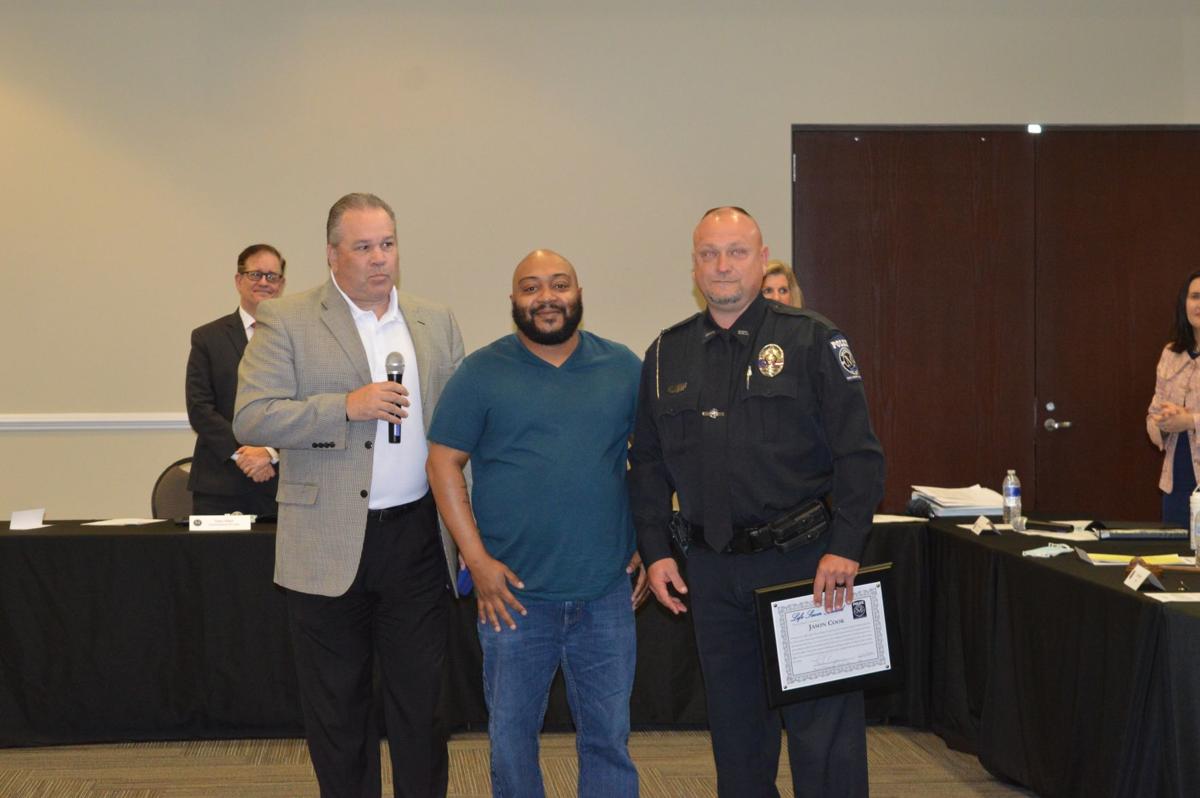 Mooresville Police Chief Ron Campurciani presented Officer Jason Cook with the “Life Saver” award during Monday’s Board of Commissioners meeting. Cook saved the life of Tawanda Lewis Mtandwa on March 26 by performing the Heimlich maneuver on him. 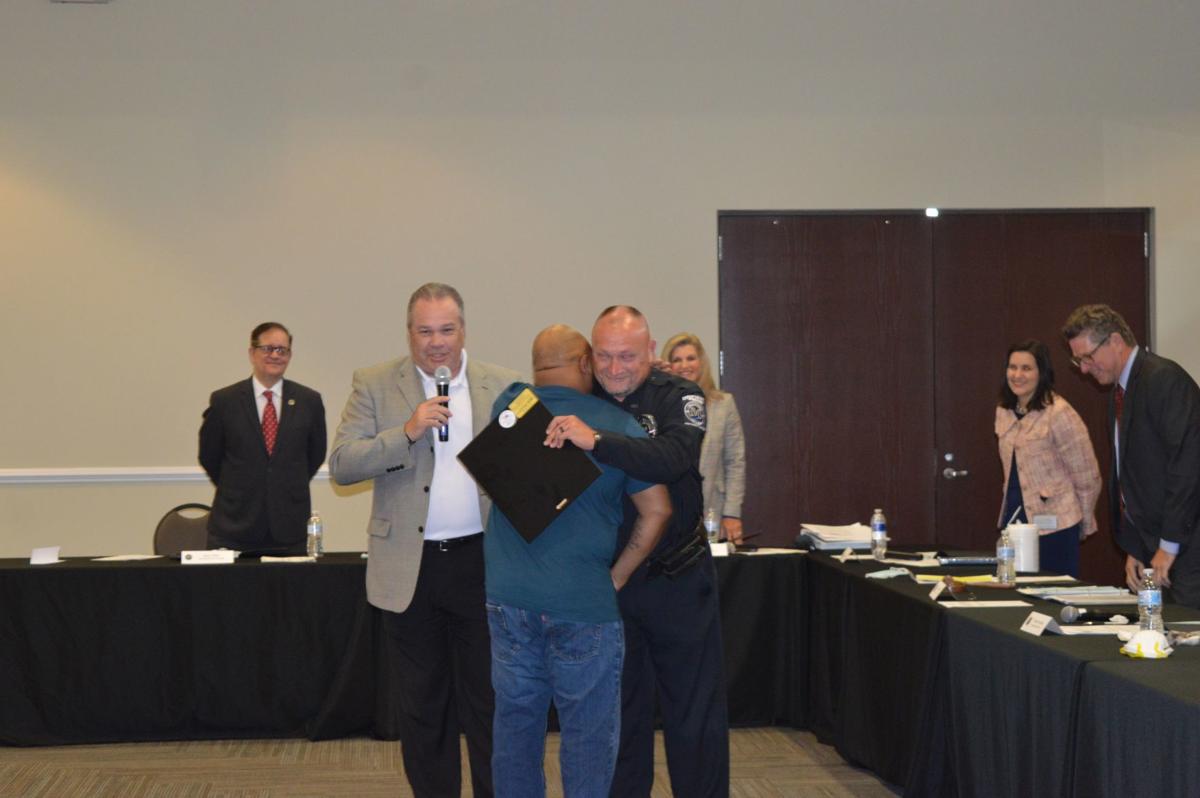 Mooresville Police Officer Jason Cook hugs Tawanda Lewis Mtandwa at Monday’s Board of Commissioners meeting. Chief Ron Campurciani presented Cook with the “Life Saver” award after he performed the Heimlich maneuver on Mtandwa on March 26 when he was choking on a pill in the parking lot of the Lake Norman Regional Medical Center.

The Mooresville Board of Commissioners Monday denied a conditional zoning request that would have allowed a developer to build a fast-food restaurant with a drive-thru on and adjacent to Josh’s Farmers Market on Williamson Road.

Supporters of Josh’s Farmers Market spoke during a public hearing against the proposed development citing concerns over traffic and worries the Mooresville business — a favorite spot in town known for its local seafood, meats, vegetables and fruits — could be displaced.

In a 5-0 vote, commissioners denied the conditional zoning request, saying a drive-thru fast food restaurant with an entrance at Joe Knox Avenue and Williamson Road would not be consistent with the OneMooresville plan, the town’s future growth plan. Commissioner Barbara Whittington did not attend the meeting.

The property, surrounded by Corridor Mixed Use (CMX) and hybrid industrial (HI) zoning designations, requires a conditional use allowance to operate a drive-thru.

“It’s about what do we want to see Williamson Road get into,” said Mayor Pro Tem Lisa Qualls. “Yes, it’s commercial, yes it’s CMX, we understand that. That’s our plan and we want that business community, but it has to be the right type of community and the right type of new development out there.”

Officials also feared the heavier traffic the drive-thru could bring would negatively affect one of the town’s busiest thoroughfares, a major road already facing significant change.

“A fast food restaurant and amongst the midst of, again, what I consider our Main Street on the west side, it’s a challenge,” said Qualls.

The North Carolina Department of Transportation (NCDOT) has already begun purchasing right-of-way for the upcoming two-section, $61 million Williamson Road widening project. Although budget shortfalls due to the COVID-19 epidemic have temporarily paused these acquisitions, NCDOT has said the project still has a “let date,” a date when the bids for the advertised project are opened, of Fiscal Year 2021, said Martin Fridy, owner of Magnolia Property Group, the project’s developer.

Commissioners seemed doubtful of that, however, saying they worried the developer would complete its project before NCDOT widened the road to four lanes or put in road improvements.

“The hard part for me to swallow, which would affect everybody, is the DOT has no starting date,” said Commissioner Bobby Compton.

Despite the board’s denial Monday of the conditional rezoning request, the Magnolia Property Group still plans to build a mixed-use commercial space at 179 and 185 Williamson Road with medical offices, additional office space and two other restaurants besides the drive-through restaurant.

The Magnolia Property Group is under contract to purchase three parcels of land from the Harold D. Knight Revocable Trust, Fridy said. Knight is the grandfather to Josh Graham, the owner of Josh’s Farmers Market, who operates his business on his grandfather’s property at 189 Williamson Road, Fridy said.

Graham does not own the land or lease the land from the town, Fridy said. If the conditional zoning request was granted, Fridy said Graham would still be able to operate Josh’s Farmers Market, just not on the property his company is purchasing. That would be something Graham would have to work out with his grandfather, he said.

“Josh is going to lose a portion of the property where he’s operating his business that he does not have any legal interest in operating on,” Fridy said. “Whether or not this is approved … we’re still moving forward with our development.”

After the board denied the zoning request, Fridy said Magnolia Property Group would re-evaluate and plan a project that would not require additional approval from the board — perhaps a convenience store — to fit in the same 1.3-acre space as the proposed drive-thru restaurant.

Fridy also said the conditional zoning request and the subsequent drive-thru fast food restaurant was “absolutely consistent” with the OneMooresville plan. Fridy said the Board of Commissioners had voted to rezone properties at 171, 179 and 185 Williamson Road from Single Family Residential-2, (R-2) to CMX just two weeks ago at its last meeting.

The OneMooresville Plan designates the site as Mixed-Use Corridor and Employment Center.

Local residents appeared at the public hearing Monday at the behest of Graham who wrote an open letter saying he would be forced to relocate his market if the request was approved. Supporters spoke against the proposed project with most talking about the potential for increased traffic, car wrecks and the loss of the market. Residents also suggested the fast-food restaurant, an existing business on N.C. 150 whose access and parking lot is being affected by the road-widening project there, relocate to one of several empty fast food buildings nearby instead of building a new spot near Josh’s Farmers Market.

Town resident John Nobers said development is necessary but argued he would rather see a market providing good food options and an experience rather than just another fast-food restaurant.

“[Josh’s] is part of the Mooresville-Iredell community and I think everyone can attest to that,” Nobers said.

“I don’t think we need anything,” Stutts said.

In other business, Mooresville Police Chief Ron Campurciani presented Officer Jason Cook with the “Life Saver” award for saving the life of Tawanda Lewis Mtandwa on March 26. Campurciani said Cook was in the parking lot of the Lake Norman Regional Medical Center where he saw two people attempting the Heimlich maneuver on Mtandwa.

Cook went over to assist and successfully dislodged the pill Mtandwa was choking on using the Heimlich maneuver. “Officer Cook is commended for his life-saving actions,” Campurciani said.

Mtandwa attended the ceremony and thanked Cook for saving his life.

In other business, the Mooresville Board of Commissioners approved the annexation of 13 properties into the town, including 95 acres at 1828 Mecklenburg Highway near Bridges Farm Road. The property has been a part of the town’s Extra Territorial Jurisdiction, or ETJ, since 2004. The property, owned in part by Bill and Tom Freshwater, has been the subject of many development proposals over the past years.

See who got money in our state from the Paycheck Protection Program meant to keep Americans employed during the pandemic. The program has been popular but also controversial.

Mooresville Police Chief Ron Campurciani presented Officer Jason Cook with the “Life Saver” award during Monday’s Board of Commissioners meeting. Cook saved the life of Tawanda Lewis Mtandwa on March 26 by performing the Heimlich maneuver on him.

Mooresville Police Officer Jason Cook hugs Tawanda Lewis Mtandwa at Monday’s Board of Commissioners meeting. Chief Ron Campurciani presented Cook with the “Life Saver” award after he performed the Heimlich maneuver on Mtandwa on March 26 when he was choking on a pill in the parking lot of the Lake Norman Regional Medical Center.