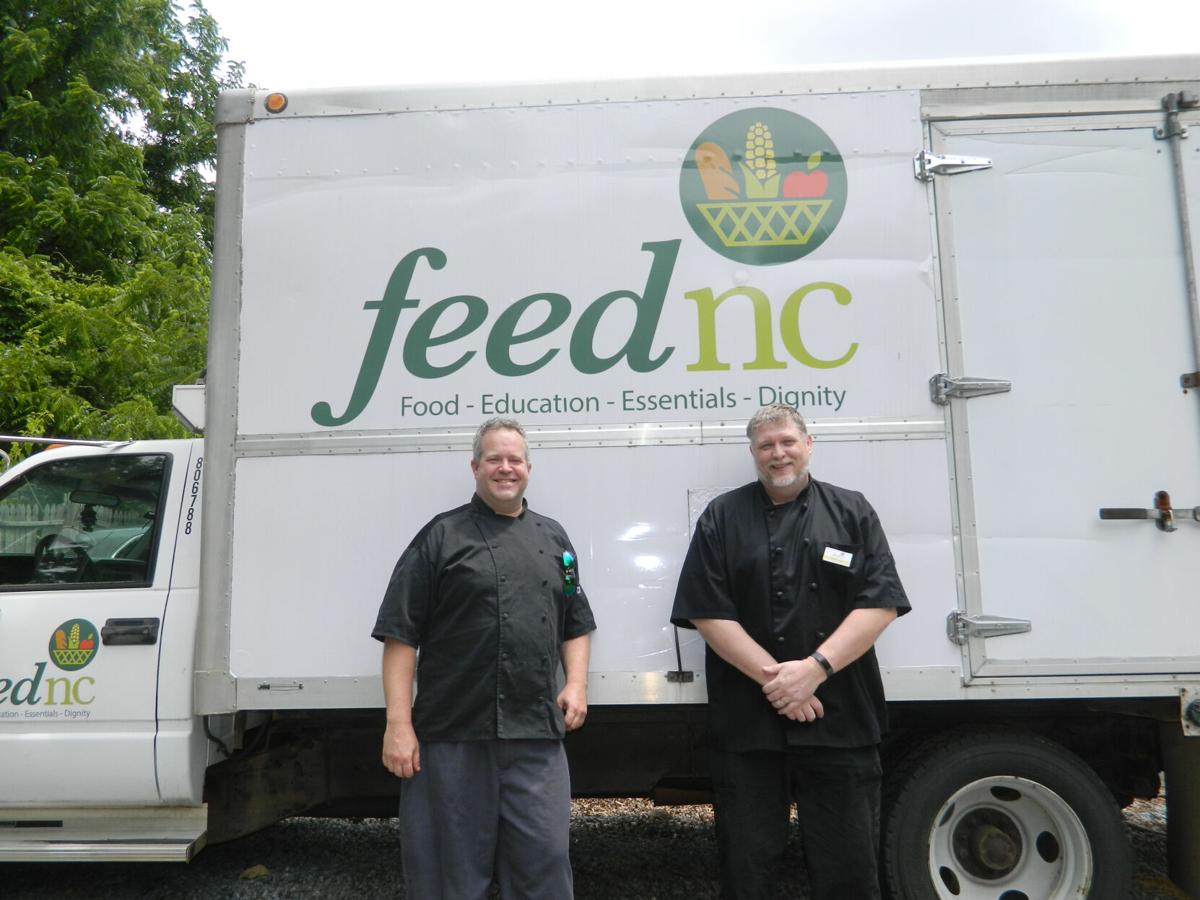 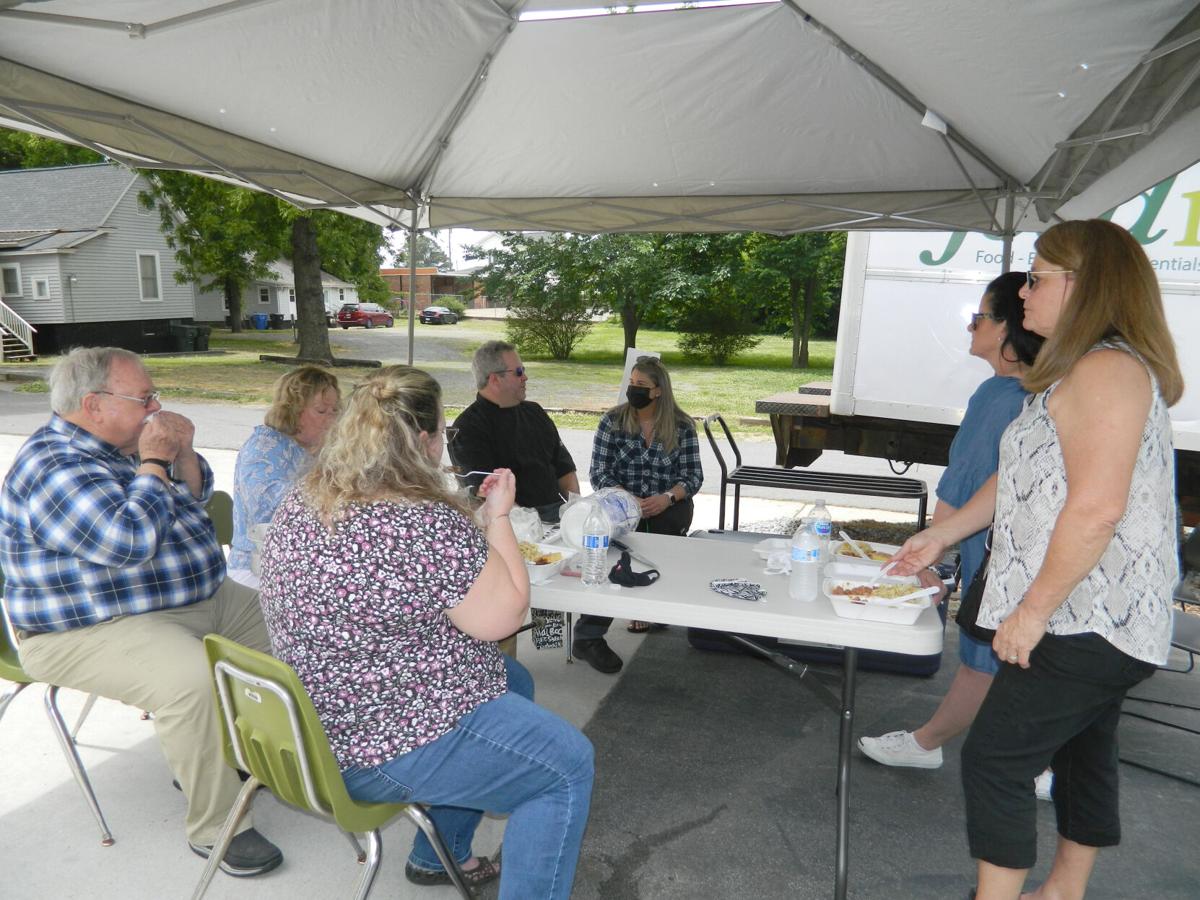 A tent was set up for volunteers, guests and others visit with Chef Andrew Hughes.

FeedNC recently hosted an event providing volunteers, guests and others the opportunity to bid farewell to its head chef Andrew Hughes. A tent was placed in the back parking lot of FeedNC where Hughes chatted with visitors, and ice cream was also provided for everyone during two-hour drop-in event.

Hughes noted his two years at FeedNC had “been a whirlwind” with the pandemic. He shared that his time at FeedNC “has been by far the most enjoyable job I’ve ever had. It’s very difficult to leave. Just having the opportunity to use my skills and talents to change people’s lives for the better, it’s just so incredibly rewarding. I feel good about the position that I’m leaving the organization in. But at the same time, I’m kinda sad that I’m not going to get to see the new location come to fruition. I’ll be back to see it, but it’s not being a part of it.”

His presence will be missed by those he worked with as they and Lara Ingram, executive director, expressed their appreciation for Andrew and his knowledge.

Ingram said that Chef Andrew “comes with a lot of experience in the culinary world and he’s added a lot to the organization and helped us to continue to improve the culinary program. He’s also helped us with partnerships in the community and added a real legitimacy to our culinary program which has been wonderful. He also has a very big heart. He cares about this community a lot.”

Emily Veldman, who serves as the culinary program coordinator, likewise expressed how they would miss Andrew. “He’s done a lot for the program. He’s done a lot for FeedNC in general. He’s very talented and has a really big heart for what he does.”

Hughes and his family, Ingram noted, have moved to Texas for his wife’s position and with his move, FeedNC has a new chef, Brendan Krebs of Cornelius, who trained with Hughes for a few weeks prior to his leaving.

Ingram said that Krebs is “also highly skilled and has a lot of culinary skills. So we are lucky and blessed to have found somebody that can be the next step. He is also a certified trained chef. He has been to culinary school as well, so he has very similar skills and also has an incredibly big heart for this community. He has worked a lot with Boy Scouts and his sons, and they are just a good family, a good person. And that was an important part in making sure that we had the right fit.”

Krebs said he had previously worked for the Rusk Eating House and several fraternities at Davidson College before COVID hit and he had to be laid off. He then became the kitchen manager/executive chef at the White Water Center from May 2020 to April 2021.

“I just wanted to find something a little more fulfilling,” he said of coming to FeedNC.

“I think it’s a great opportunity. I get to work with a tremendous group of volunteers that are very dedicated. It’s not like a regular work environment. Everybody that is here wants to be here and is very dedicated to a really worthy cause.”

He also shared that the people at FeedNC work hard and are often working multiple jobs and they’ve got families. “I think that’s an important aspect that we need to do, that we need to respect them.

“It’s just a very rewarding thing for me to be able to work with volunteers to help them feed people that are in need but then also the culinary program aspect of it where we job train and can employ people,” Krebs said. “That’s always been near and dear to my heart. I’ve always enjoyed working with people and training them to succeed in the culinary field in restaurants. I think that this opportunity allows that to happen, allows it to adapt it to people who might not otherwise be able to get a culinary education.”

Holbert shared that she feels Brendan is likewise passionate about the work at FeedNC and the culinary program as he steps into the role and will make a good fit there.

“We’re very excited for what’s to come for Andrew and, in terms of Brendan coming on next as head chef with FeedNC, for him as well. He’s got some good ideas and he’s going to continue what Andrew’s been doing. It’s a very bittersweet event for sure.”

When asked about future plans, Hughes said for the present, he would work on getting settled and then, he said, “we will see what happens after that.”

Fauci: You get vaccinated because you want to save your life

Fauci: You get vaccinated because you want to save your life

The Mooresville Graded School District Board of Education will be holding an emergency meeting today at 5 p.m. in the MGSD Performing Arts Cen…

On July 10, Katy Clatterbaugh of Mooresville was crowned Mrs. Cosmos International 2021 at The Omni Orlando Resort at Championsgate. As the ne…

Lake Norman is magical setting of improbable, dubious and outrageous

It is usually in Spring on that last early cool morning, during the off-peak hours of the day when most of the boaters and fisherman are not y…

The following deeds were filed in the Iredell County Register of Deeds office from July 6-12. For more information regarding specific plots of…

Teacher charged with sexual exploitation of a minor

A Mooresville teacher has been charged with soliciting photos of a 15-year-old girl through SnapChat.

After a long history of disturbances, drug violations and numerous calls to the Iredell County Sheriff’s Office, a Mooresville neighborhood wi…

The following persons registered for assumed names in the Iredell County Register of Deeds office from July 6-17.

A tent was set up for volunteers, guests and others visit with Chef Andrew Hughes.