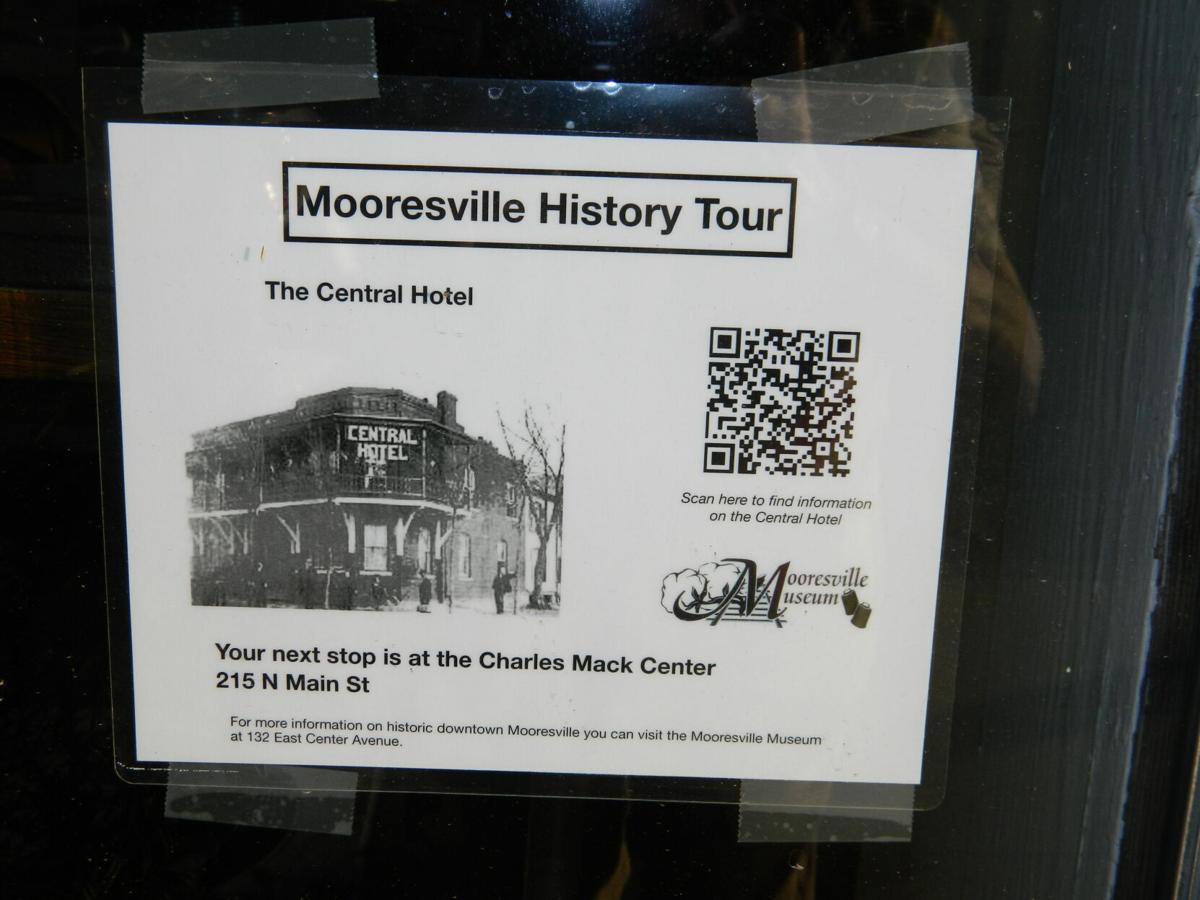 This QR Code is in the window at Tim’s Table on Main Street. 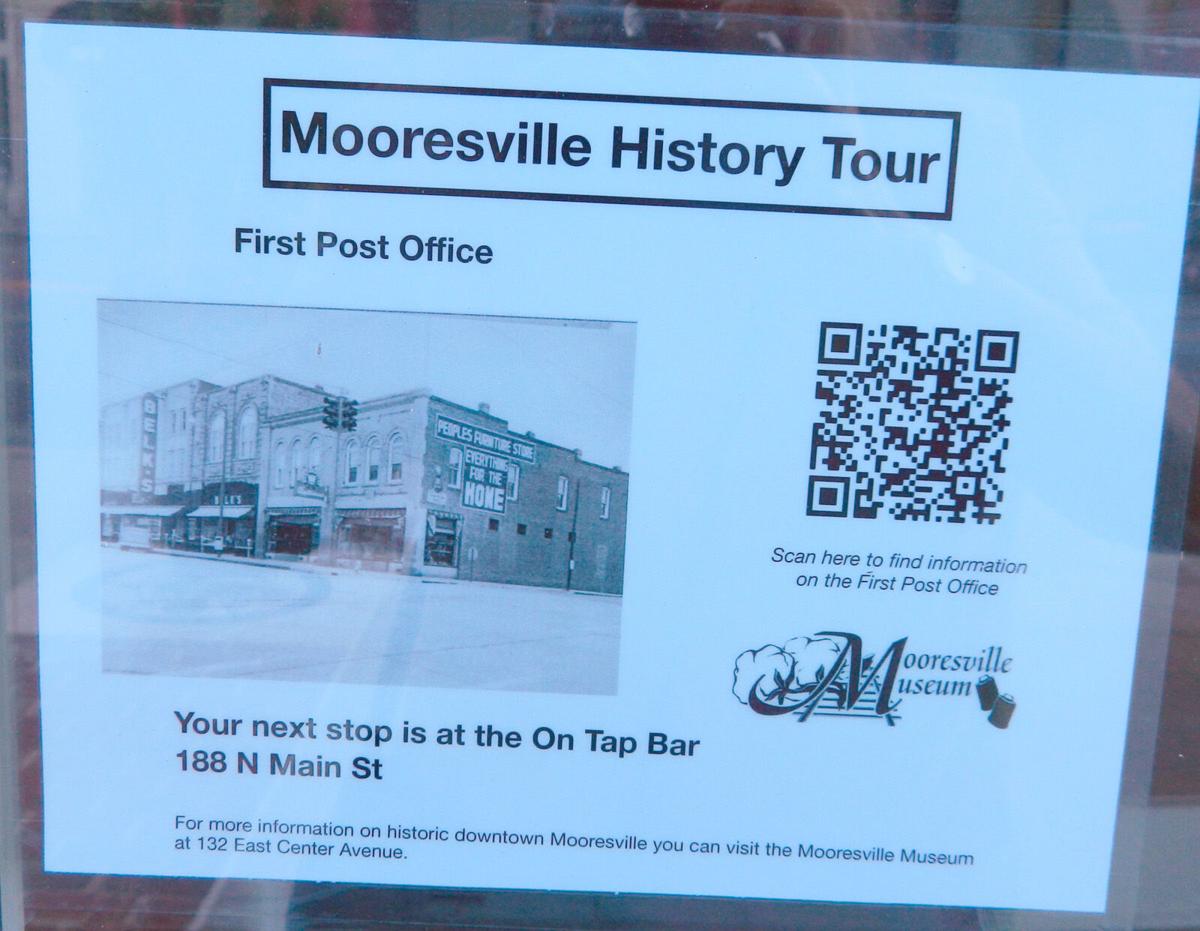 This sign can be found at the Charles Mack Citizen Center. 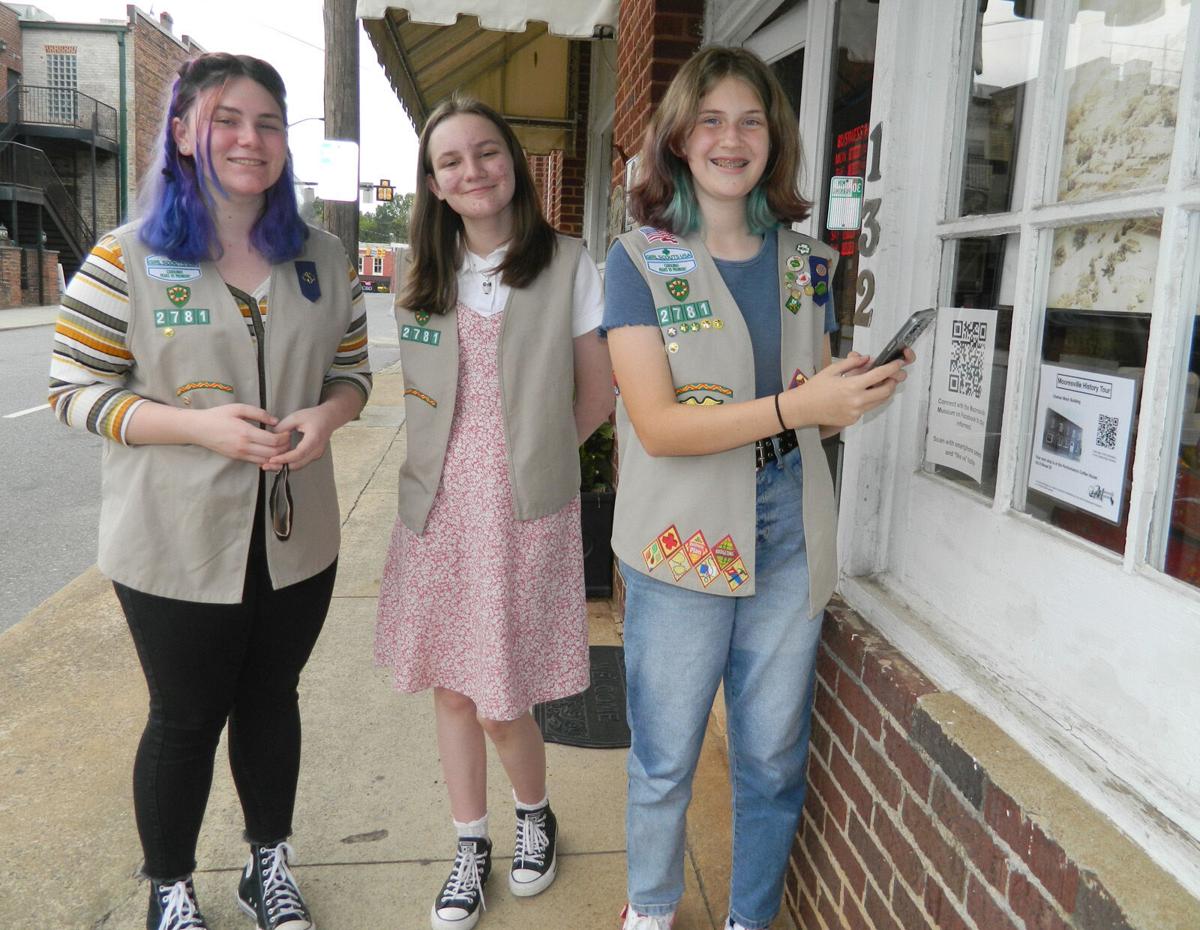 Girl Scouts, from left, Sophie Baum, Reagan Eshleman and Elizabeth Reinemann, stand at the Mooresville Museum as Elizabeth prepares to scan one of their QR Codes located there.

If you notice those new QR codes on various buildings in downtown Mooresville, you can thank Girl Scouts Sophie Baum, Reagan Eshleman and Elizabeth Reinemann. The trio worked with The Mooresville Museum and the Local History of Mooresville, NC, to expand the existing walking tour, thus adding more virtual tour spots in downtown.

Sophie, Reagan and Elizabeth, all ninth graders, are members of Troop 2781 which meets at All Generations Audiology on East Center Avenue in Mooresville. The three decided on this as their Silver Award project, providing visitors and residents alike the opportunity to learn some local history. Sophie and Reagan are students at Mooresville High School and Elizabeth is a student at Lake Norman High School.

The Silver Award project, they shared, can be done with a partner or as an individual and requires 50 service hours. They said they worked through COVID, communicating back and forth beginning the project in March 2020 and finishing in September 2021.

Starting to work on the project when they were in the eighth grade, Sophie said, it was initially her and Reagan working together because neither wanted to work alone and, following quarantine and when the group could get back together, Elizabeth said she joined the pair to work on the project

It all began, Sophie shared, when they visited Greenville, S.C., and saw the city’s Mice on Main: the Scavenger Hunt.

“It’s like a history tour through their downtown Greenville area, and they have information about a certain location,” she said, “and I thought that was really cool. So we kind of started there. It changed a lot, but we started with that.”

“The base idea was like a scavenger hunt type deal with all the historical stuff around Mooresville,” shared Reagan, “because Mooresville’s got a lot of interesting history that not a lot of people know about.”

With their group in place, the next step was to get their idea approved. This included writing a proposal and submitting it to their troop leaders, Diana Eshleman and Vicki Reinemann.

Once approved, “we worked out more of the planning,” Reagan said. “Sophie and her dad, Kevin, found the Mooresville Museum that we could collaborate with to help work with it, and it was a lot of back and forth and researching.”

Alan Bradford, president of the Mooresville Museum board of directors, said it has been months since they first came into the museum wanting to do a project and asking his opinion about their idea.

Elizabeth added that they also “met at the (Mooresville Public) library where a lot of the research happened. We spent about two hours one day researching” in the archives area of the library, she noted.

“The people at the library were really great,” Sophie said.

In deciding what buildings they wanted to include in their project, Reagan noted that they visited the walking tour that already exists and “we kind of thought, how can this idea be improved and how can we make it more accessible,” she said, “and then we picked interesting buildings that have a lot of history around Mooresville to be our stops for it.”

While doing their research, they narrowed down their 10 options to eight, after which the three did “a lot of figuring out layouts, what information we wanted, how we were going to arrange things and getting stuff approved,” Reagan continued.

There was also “a lot of emailing every day,” Sophie said.

The projected involved “a lot of communication” added Elizabeth.

Getting approval from the various business owners was another step in the process as the group visited each site and asked permission for the QR code sign to be placed in the business window so people can scan and learn about the history, noted Reagan.

Once permission was granted from the owners, the scouts printed out and laminated the signs and placed them in the individual buildings. Sophie then submitted the group’s final form noting the completion of the project.

Anyone wishing to learn more about Mooresville’s history and the individual buildings can scan the various QR codes and learn about the buildings and in some instances, Sophie said, a little about the people involved there as well.

When the codes are scanned, it goes to an individual web page, which Bradford helped the group to create so the QR codes could go to them.

After the research was completed, each of the girls noted they had their own favorite building, which they thought was great to learn about.

For Sophie it was the Central Hotel, as she said, “I thought that one was really cool.”

Reagan chose the depot which houses Mooresville Arts. “I love that place,” to which she added she wanted to do this building because she used to take art classes.

It was the old bank, now On Tap, which Elizabeth chose as her favorite. “When I was doing the research, it said that the vault was still there, and it changed hands a bunch of times.”

The trio said by doing this project they hoped that others would, as Sophie said, “learn more about the history behind the places” and as Reagan added her hope “that people get more interested in their town because Mooresville’s a cool place.”

Not only do they want others to learn from their project, they said that when it was all completed, they had themselves learned from the experience.

“I learned a lot about communicating with others, like emailing and getting together with people, things like that,” said Sophie.

Reagan said she had “learned a lot about the buildings because I knew Mooresville had a history, I just didn’t know what it was.”

Kevin Baum noted that he thought by having the signs up, “with this museum being one of the stops, it should encourage a lot more people to come to the museum.”

The scouts expressed their thanks to those who helped them along the way, including Bradford for his help with the webpages and history, the library for providing help with their research of the buildings, the business owners for allowing them to place the signs, and Baum for his assistance throughout the project.

“I had a blast, Bradford said, “I don’t know who had more fun, them or me. When you get the youth really involved to this level, I really think that any one of these three can very easily do a walking tour of downtown Mooresville.”

This QR Code is in the window at Tim’s Table on Main Street.

This sign can be found at the Charles Mack Citizen Center.

Girl Scouts, from left, Sophie Baum, Reagan Eshleman and Elizabeth Reinemann, stand at the Mooresville Museum as Elizabeth prepares to scan one of their QR Codes located there.