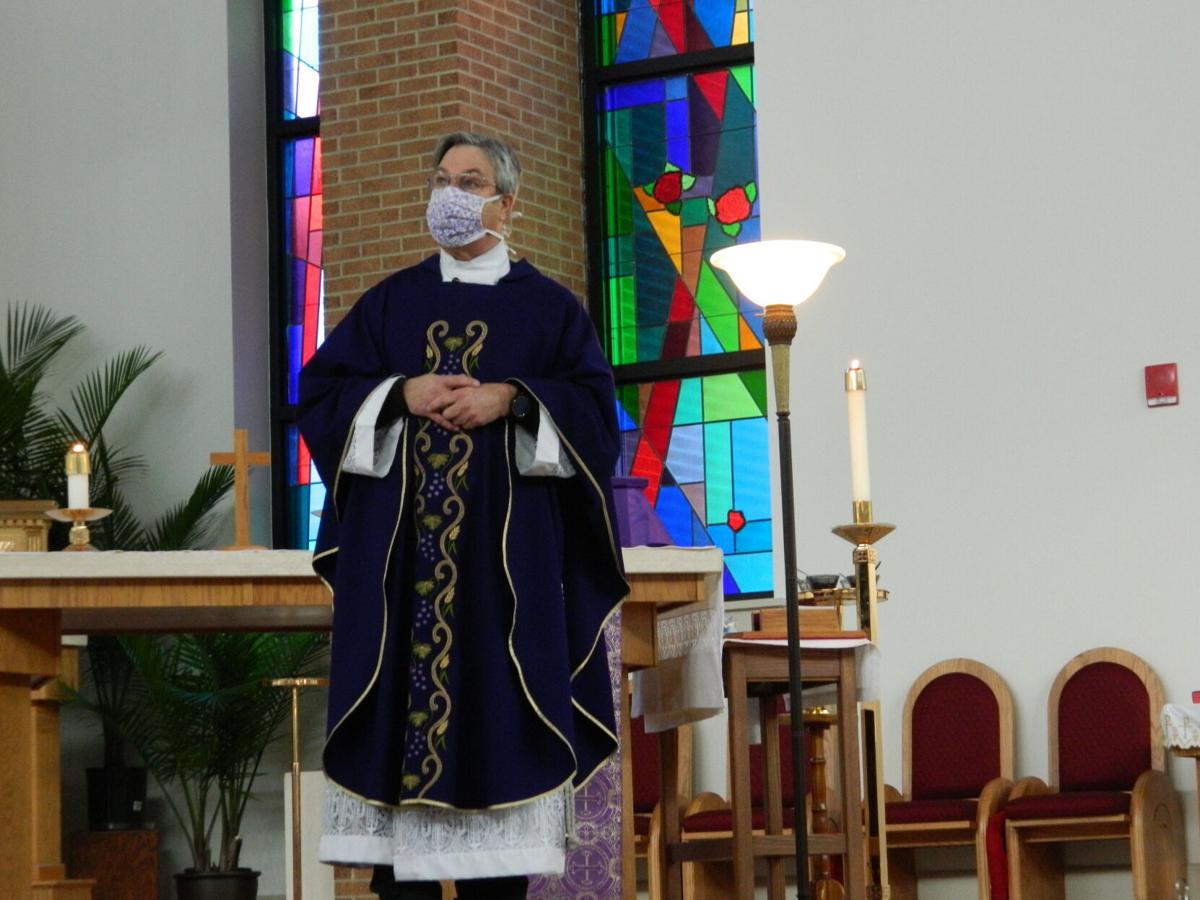 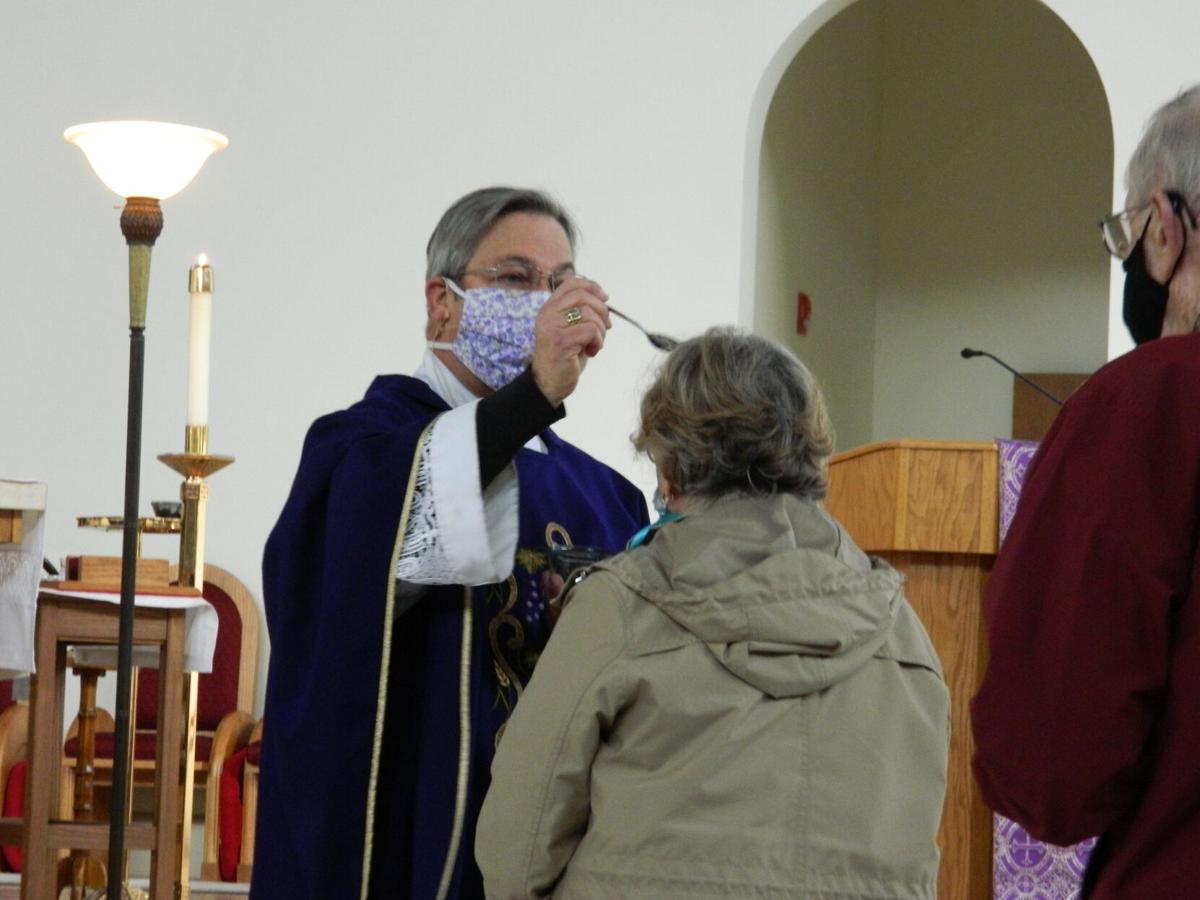 Father Lawlor sprinkled the ashes on the heads of the congregation. 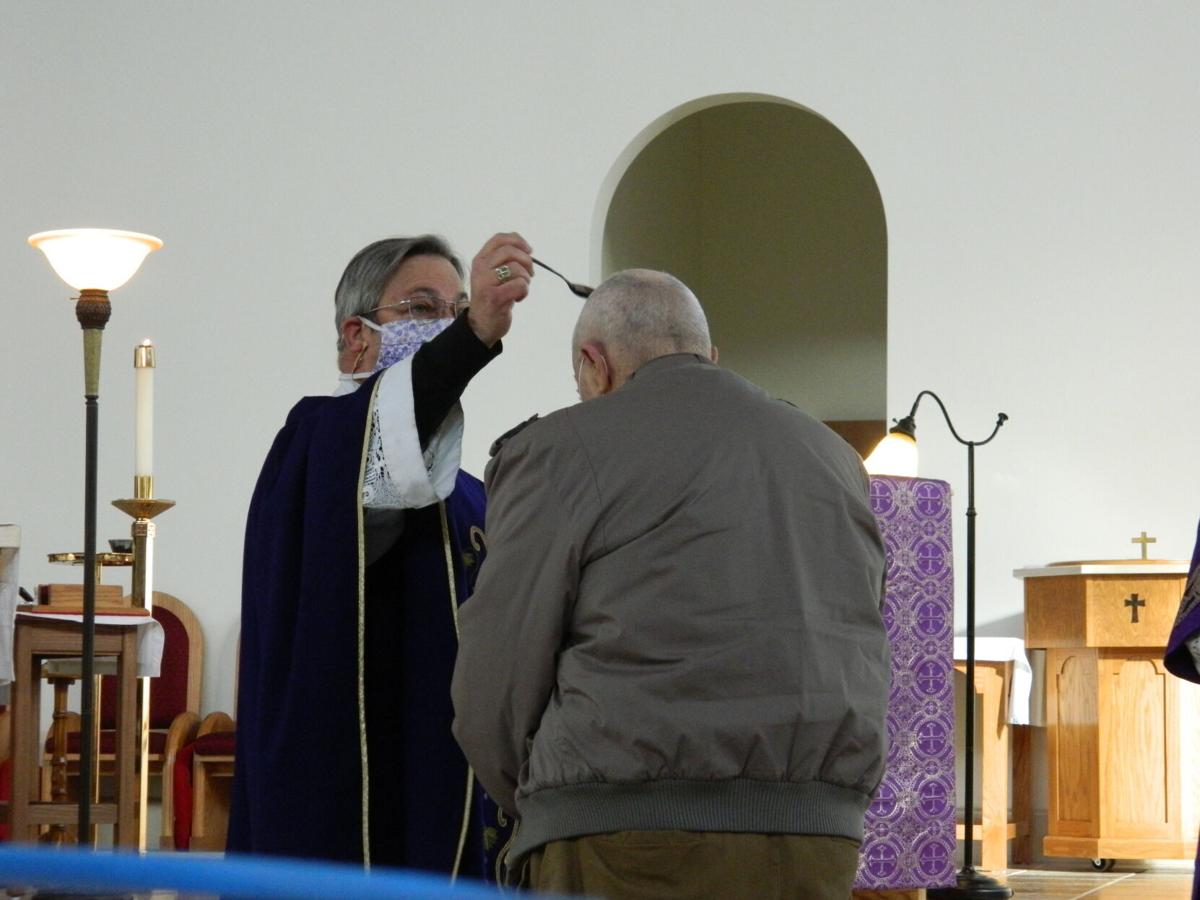 The congregation went up to receive the ashes during the Ash Wednesday Mass. 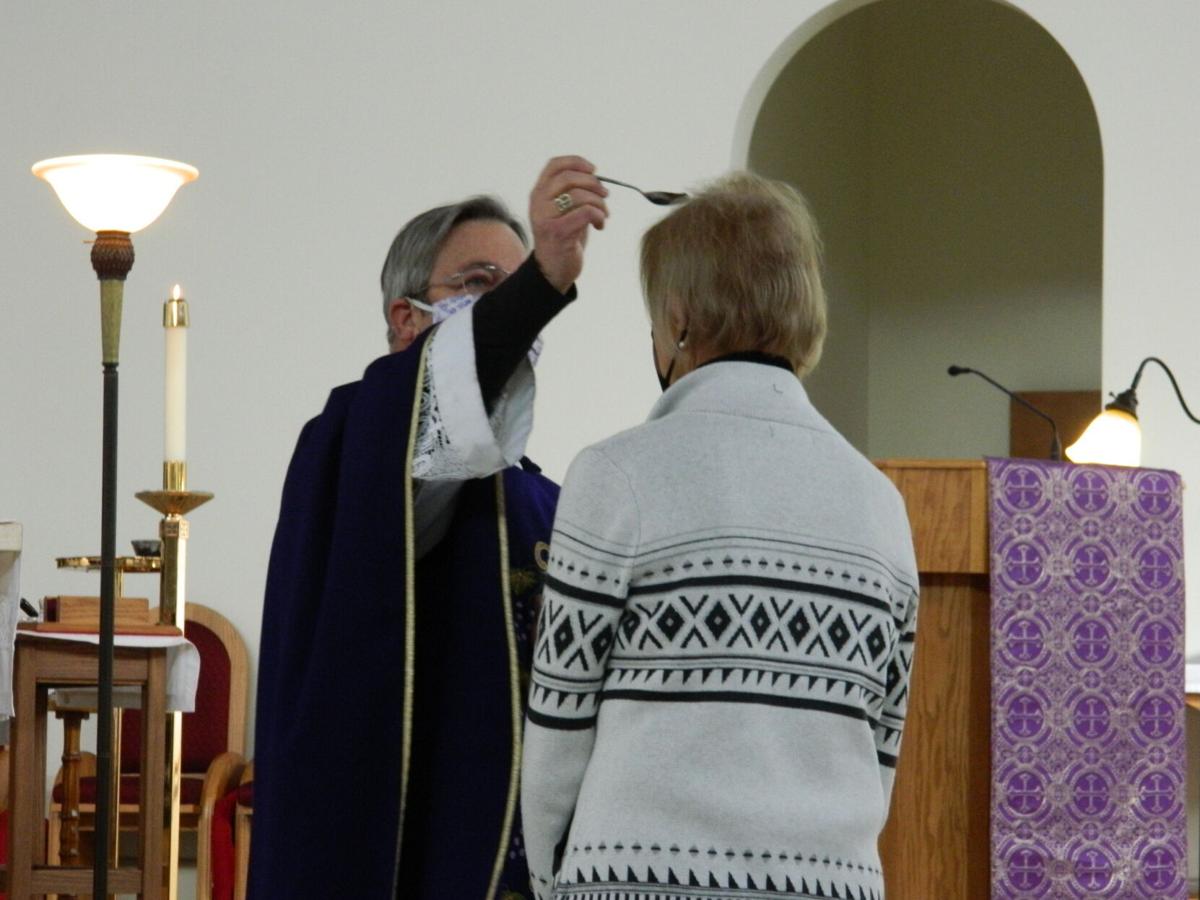 The ashes were sprinkled instead of the imposition of placing them on the forehead due to COVID-19. 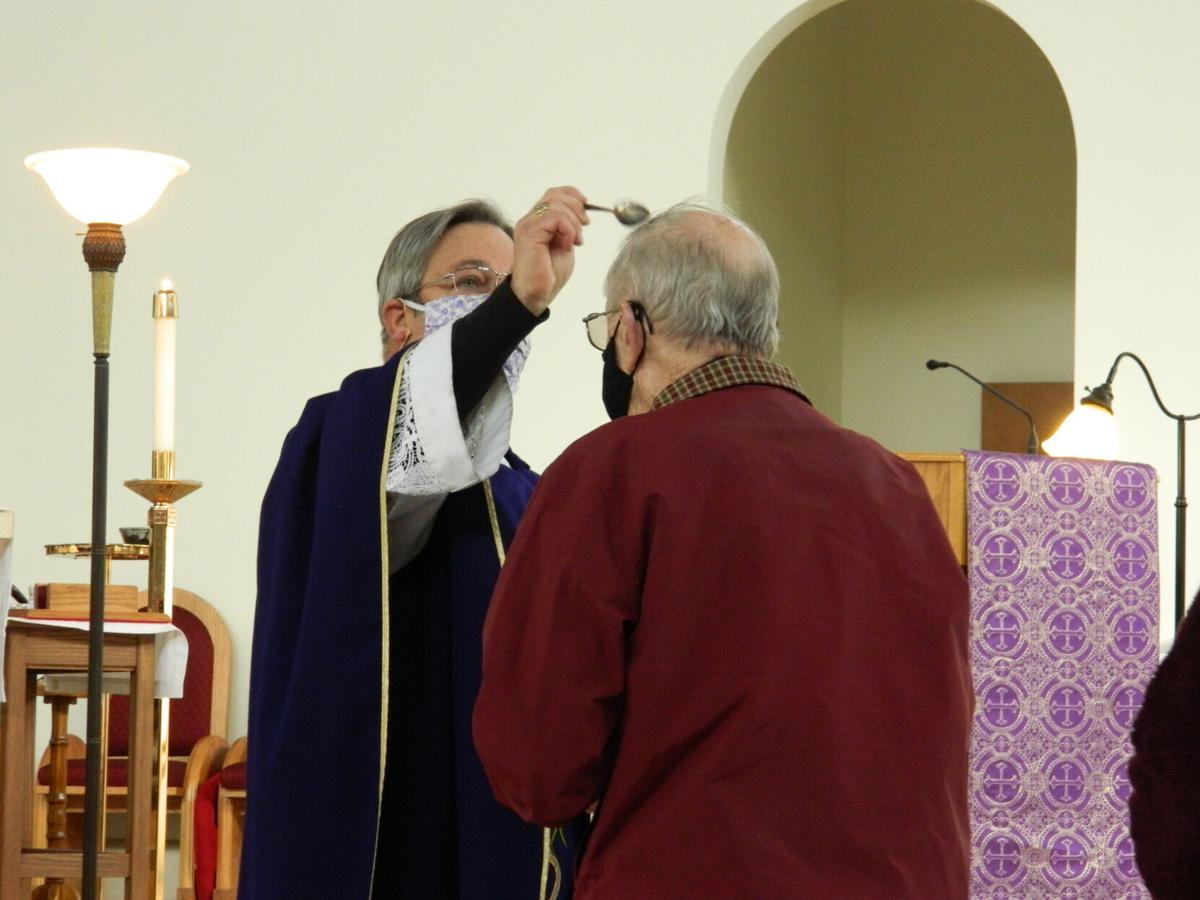 Those attending were sprinkled with the ashes on the head during the Mass.

Ash Wednesday Mass was celebrated at St. Therese Catholic Church on Brawley School Road on Feb. 17 and just as many events and services have had to change because of COVID-19, this year’s Ash Wednesday Mass looked a little different as well.

This service, which as Father Mark S. Lawlor, who has served as pastor of the church for three and a half years noted, “is the beginning of the season of Lent, which is our preparation for the celebration of Easter and so Ash Wednesday has become throughout the church a very popular time to attend to begin, in a sense, a Lenten journey or Lenten retreat.”

Prior to the pandemic, said Lawlor, the manner in which the Ash Wednesday Mass was conducted was “there was usually the imposition of the ashes on the forehead in the sign of a cross.” He said that he has been a priest for 25 years, this is the typical way the service is held and, as he noted, going back longer than his 25 years.

However, COVID-19 has changed this throughout the church as Lawlor said “we are doing a non-touch imposition of ashes. We will be sprinkling the ashes on someone’s head. There won’t be any touch. The other thing too is we will just do the prayer at the beginning instead of for each individual person.”

Ashes, Lawlor said, “go back to ancient times. In the Old Testament it was a sign of repentance. We know that often in penance it was sackcloth and ashes and for us it was also a reminder of our mortality.”

But he stressed that the manner of “how those ashes are put on a person is not what’s really important. The whole point really is the ashes are an external sign of an interior conversion. It’s what happening in the heart,” he said.

Other differences that Lawlor pointed out that would be seen at the Mass and which have become the norm during the pandemic include “about half of our pews are taped off, and we are asking our people for social distancing and for masks. We have lots of sanitizing gel around the church and are encouraging people to wash hands and follow all the protocol.

These safety measures have been ongoing at St. Therese Catholic Church since they reopened on Memorial Day weekend along with their offer of live-streamed services so that people can still watch from home.

Approximately 200 people would be attending the morning mass, Lawlor estimated with a total of 1,500 people anticipated to attend one of the Ash Wednesday Masses, which were held at 7 and 9 a.m., noon and 5:30 p.m., with a Spanish Mass at 7 p.m.

“We had our first Mass this morning at 7 a.m.,” Lawlor said, “and I saw a couple that I haven’t seen in probably six months or so. Little by little, there are some coming back out. Ash Wednesday is a very popular time in the church.”

The service began with a time of prayer followed by scripture reading and a responsorial with the leader reading and the congregation responding.

Prior to the sprinkling of the ashes, Lawlor shared that the opening scripture from the prophet Joel — "Even now says the Lord, return to Me with your whole heart" — really sets the whole tone for the season of Lent, returning to the Lord. Everyone has some sense of some need for repentance, returning to the Lord with ones whole heart, reviewing of ones priorities,” he said.

He noted that the three disciplines of prayer, fasting and alms giving, which are shared in the Sermon on the Mount, are emphasized during this time of Lent. He stressed the importance of prayer, being thankful for what we have and giving from the heart.

“All of these things will help us in Lent, but not just for 40 days,” Lawlor said. "But hopefully they will have a positive influence on our spiritual lives going forward as well.”

As the time came for the sprinkling of the ashes, the congregation quietly and reverently made their way to the front where the ashes were placed in their head and they silently returned to the pews. The service concluded with a time of prayer and the offering up and taking of communion.

Watch Now: How will Biden’s Environmental Protection Agency be different?

Watch Now: How will Biden’s Environmental Protection Agency be different?

Father Lawlor sprinkled the ashes on the heads of the congregation.

The congregation went up to receive the ashes during the Ash Wednesday Mass.

The ashes were sprinkled instead of the imposition of placing them on the forehead due to COVID-19.

Those attending were sprinkled with the ashes on the head during the Mass.