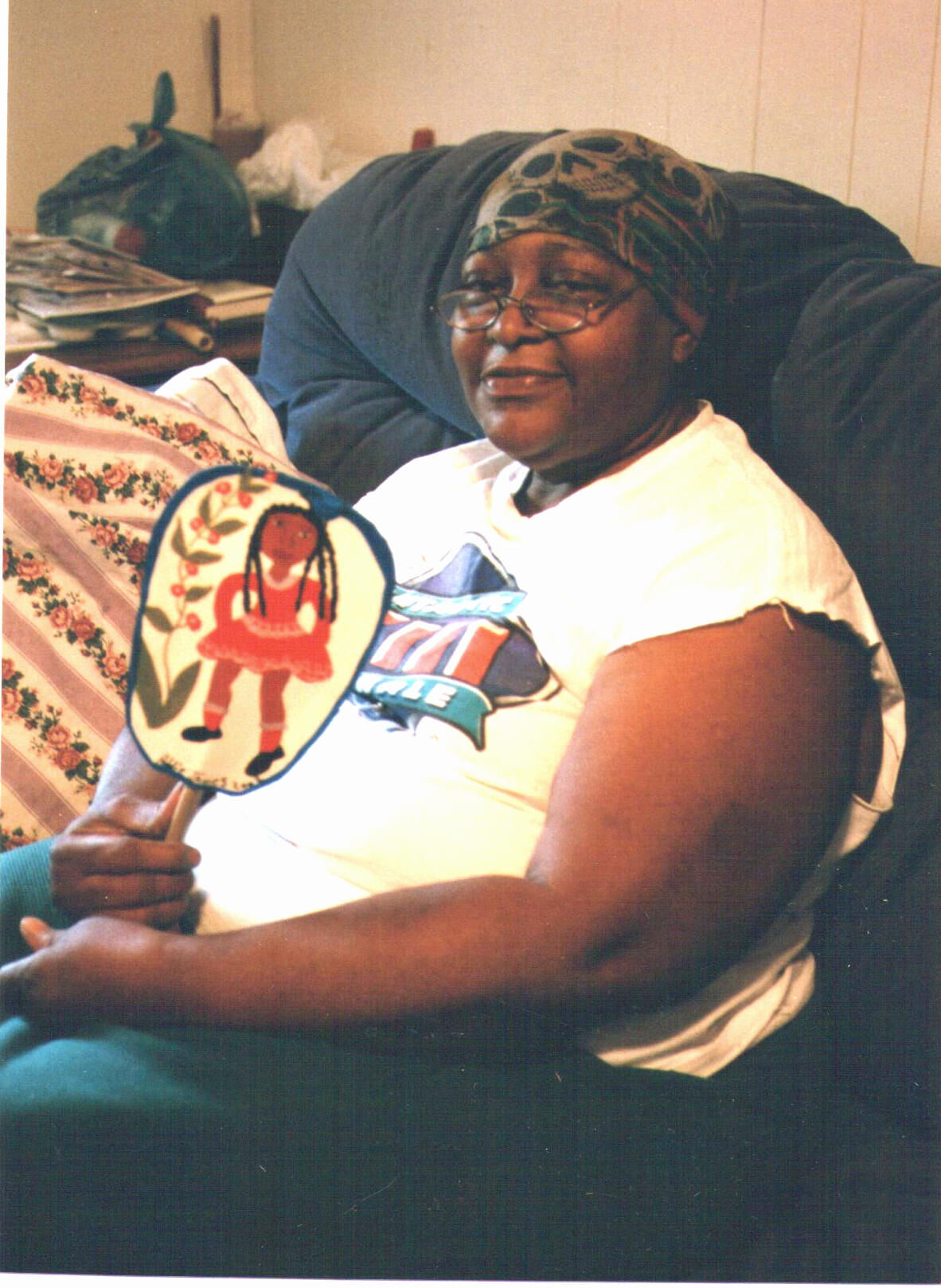 Addie James deserves to be remembered. 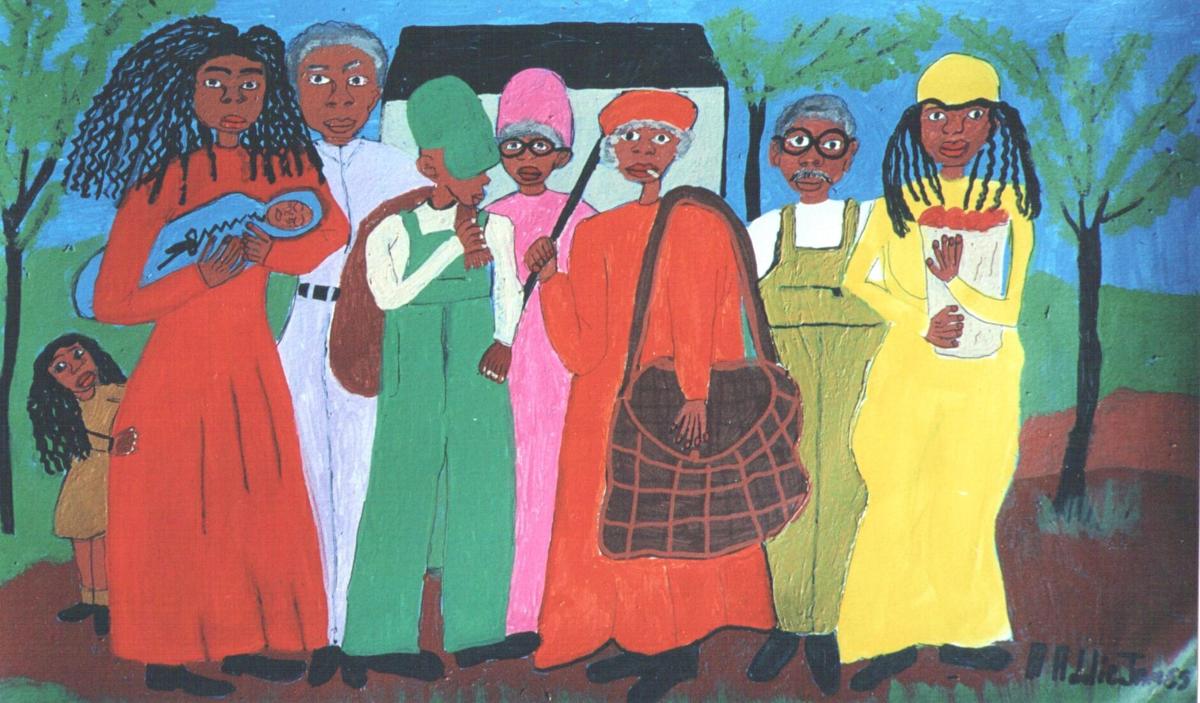 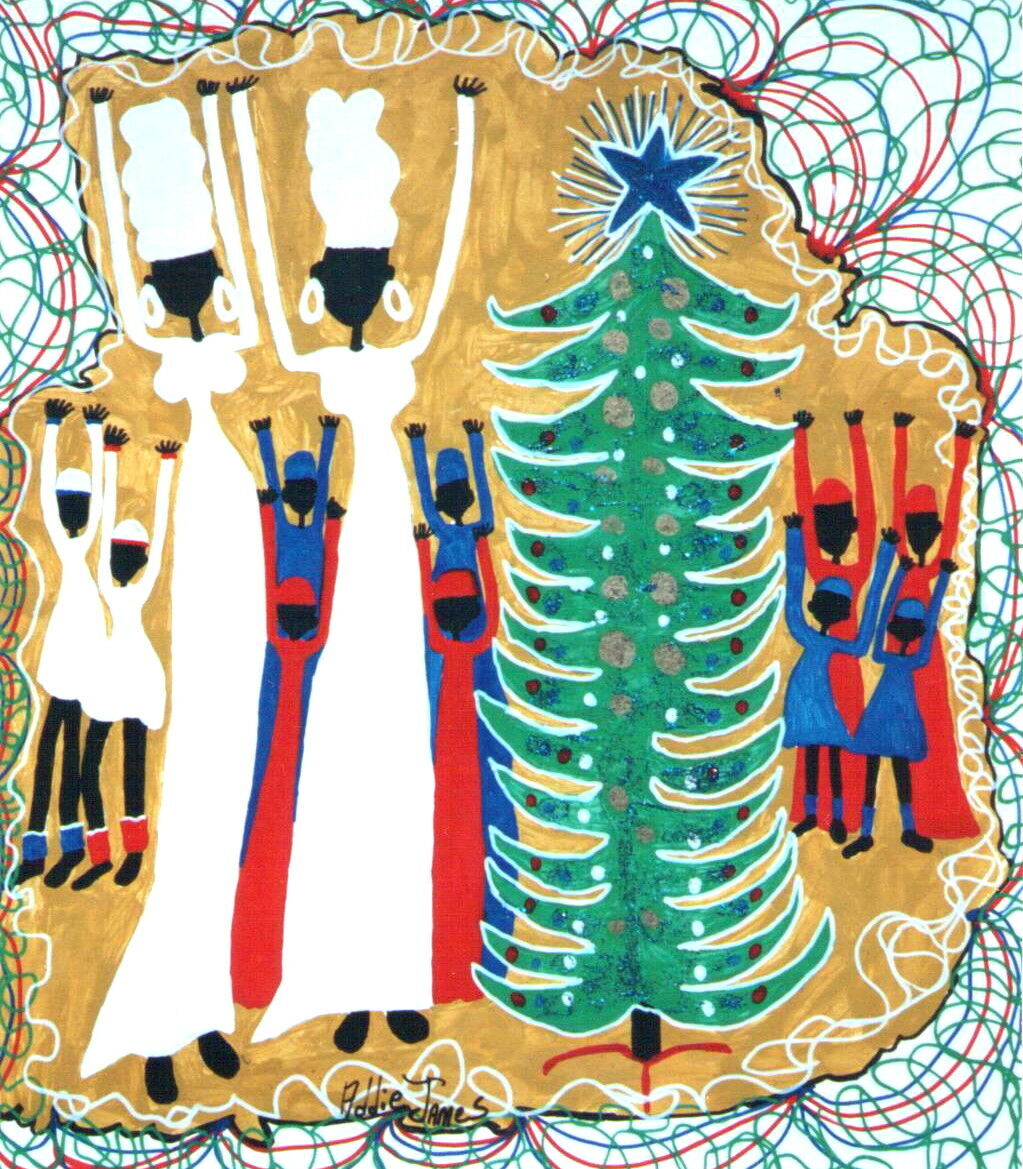 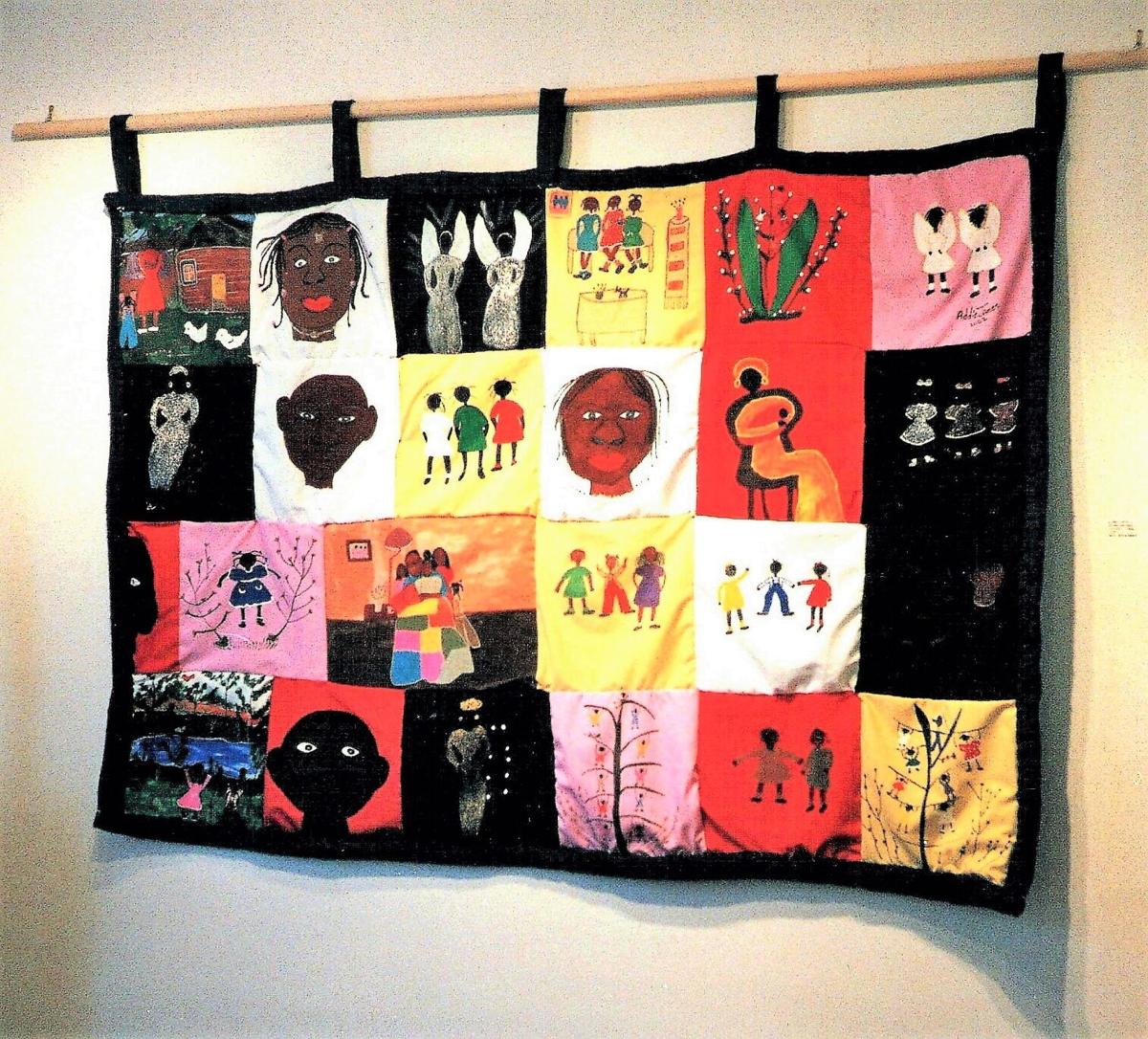 "The Quilt That Came to Life" by Addie James. 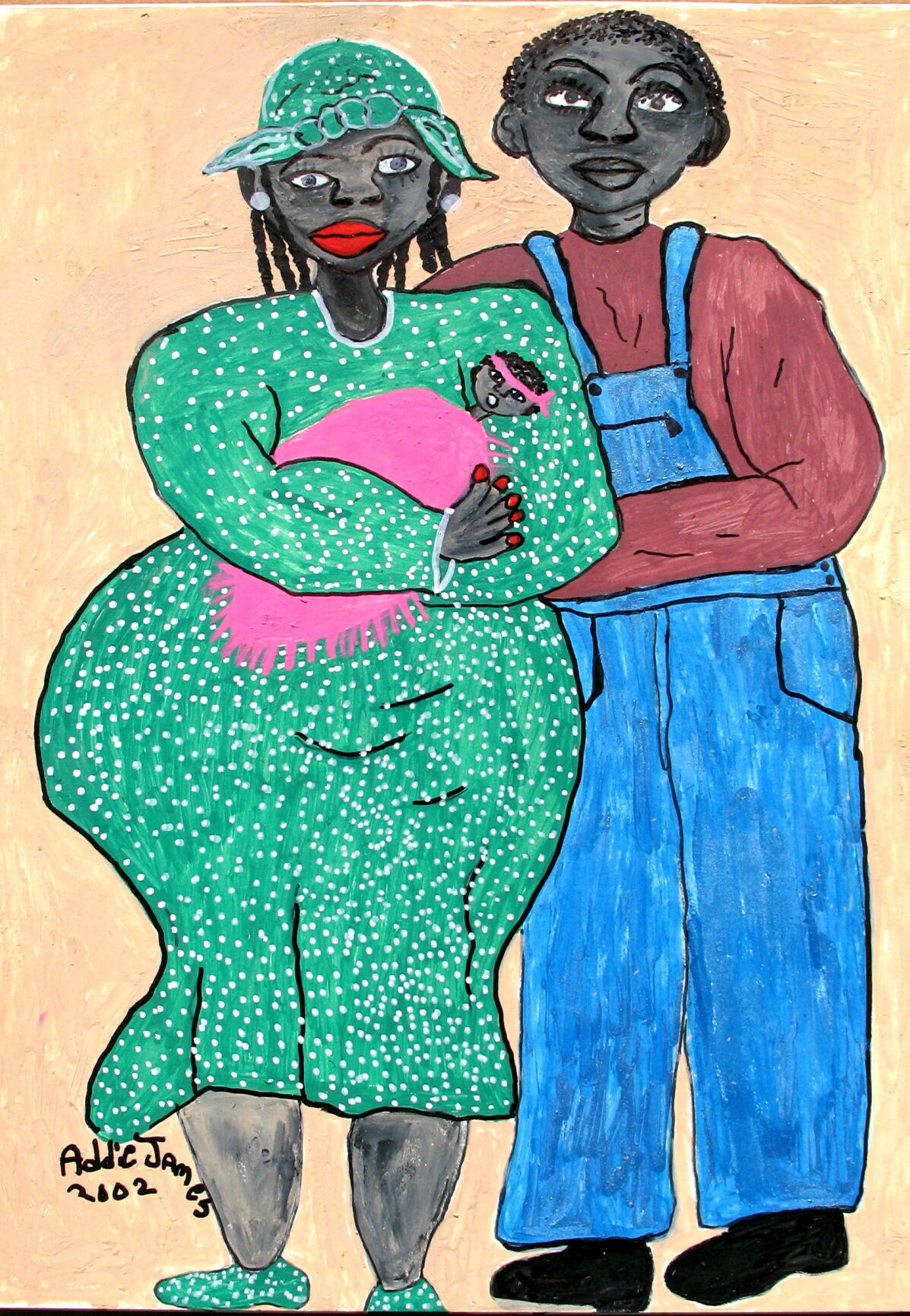 "We Finally Got Our Baby," by Addie James. 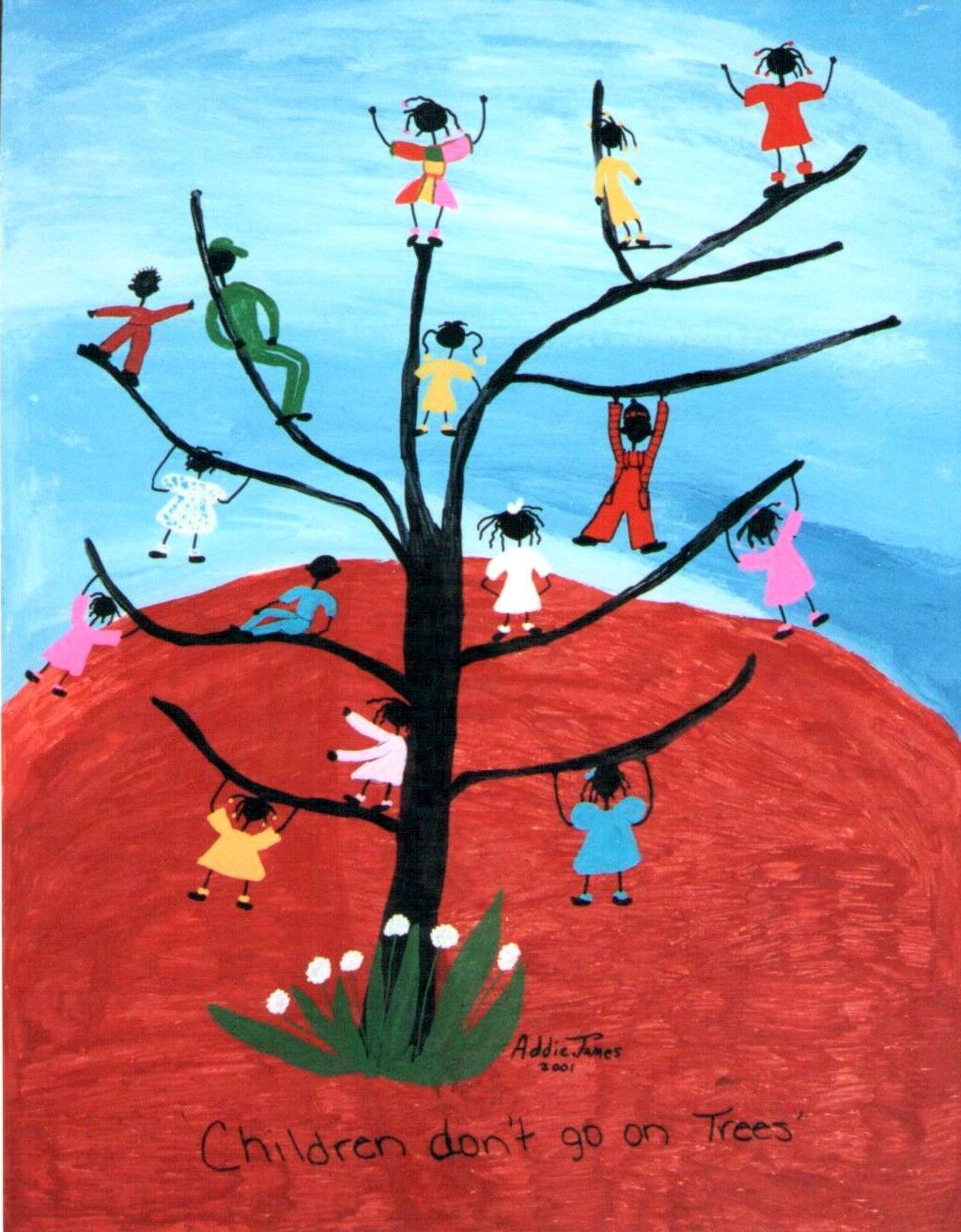 During Black History Month 2021, I’ve been thinking about folk artist Addie James, who died in 2011 at the young age of 67. During the years we displayed her work at Merrill-Jennings Galleries in Davidson, we became dear friends. Recently Statesville resident and Addie James collector, Peggy Higginson, asked me, “How would you like her to be remembered?” Oddly, my first thought was that I’d like Addie to be honored like another Statesville artist, world-famous fresco painter, Ben Long.

Benjamin F. Long IV was born in Statesville in 1945. Addie Maddox was born in South Carolina in 1943 and moved to Statesville as an infant. Ben was the grandson of noted artist McKendree Robbins Long and was born into a family of educators. Addie was the descendant of slaves and the child of sharecroppers. So the two were contemporaries.

At age 18, Ben went to UNC Chapel Hill to study creative writing. Afterwards, he moved to New York City and became a member of The Art Students’ league. Back in Statesville, Addie lived near the railroad tracks in Templeton Hill, later on Belmont Street. Her father drove a trash truck and her mother worked in a clothing factory. Addie attended Morningside School for black children and endured a discriminatory “back door policy,” especially at eating establishments in town.

In 1969, Ben enlisted in the U.S. Marine Corps for two tours of duty in Vietnam. During the second tour, he was made commander of the Combat Art Team. His art from that period is now displayed in the Smithsonian.

By that time, Addie had moved on to Unity School, but failed to graduate because she became pregnant in her senior year. She had given birth to five children and married her second husband, Robert James — all while working in a factory and doing odd jobs to make ends meet.

Ben moved to Florence, Italy, and for eight years studied the ancient art of wet plaster fresco, thus beginning a famed career that to this day has culminated in 13 major fresco projects. By 1984, Ben was splitting his time between Florence, Paris and Provence. His paintings were displayed in the Royal Academy and the Royal Portrait Society in London.

She painted naïve folk art on scraps of fabric, pieces of wood and old furniture, paper bags — any surface she could find that appealed to her fertile imagination. She wrote poetry and song lyrics while dealing with the loss of a husband and a beloved son to AIDS.

She began exhibiting and selling her work at village art shows, and was known for gifting little angel paintings to folks in the hospital. Addie also created colorful church fans from cardboard and Popsicle sticks, which she generously distributed.

Eventually local galleries took notice and displayed her work, with Merrill-Jennings Galleries representing her for the last 10 years of her life. Addie was featured in "The Charlotte Observer," "Statesville Record & Landmark," and many other newspapers. She was awarded solo shows in several museums and attracted collectors nationwide, including notables like Oprah Winfrey and Maya Angelou.

Ben Long continues to work, dividing his time between Europe and the United States. He is a living master of the classical tradition and one of the greatest draftsmen of the 20th Century. Addie, of course, is 10 years gone, but her simple art lives on in the hearts of many.

The Statesville Civic Center features “Images at the Crossroads,” a major fresco by Ben Long.

To answer the original question, I would love to see Addie remembered with an Addie James Room, perhaps a children’s reading space in a public building — library, civic center, historical society? It would include displays of her three-dimensional objects and a wall of her art. I would happily donate art, as well as Addie archival materials for posterity. I suspect that many Statesville citizens, who own hundreds of her pieces, would also contribute. Hopefully the room would also be used to give children art lessons and to screen her documentary. Children were everything to Addie.

Obviously, Addie’s and Ben’s painting styles are at opposite ends of the artistic spectrum, yet both have the power to move to tears. It is my profound hope that Statesville and the wider world will remember both artists with equal reverence.

+6
Kate Merrill is a longtime gallery owner and published novelist who lives in Mooresville. She is the author of "Miss Addie’s Gift: Portrait of an American Folk Artist." The book is available in paperback from Amazon and other online bookstores.
View Comments

Deal reached to get Calif. kids back in classrooms

Deal reached to get Calif. kids back in classrooms

Addie James deserves to be remembered.

"The Quilt That Came to Life" by Addie James.

"We Finally Got Our Baby," by Addie James.