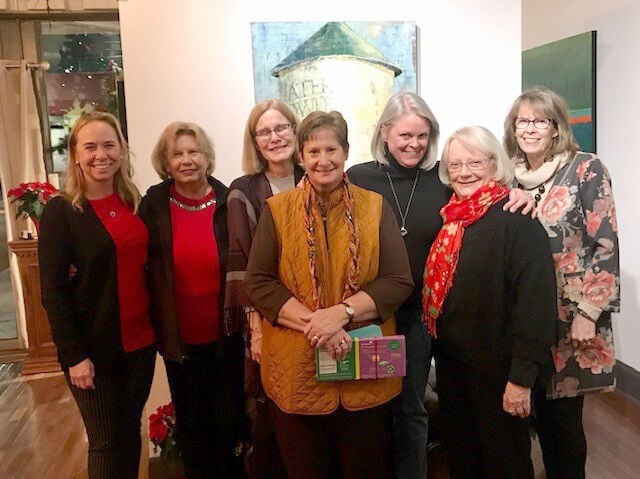 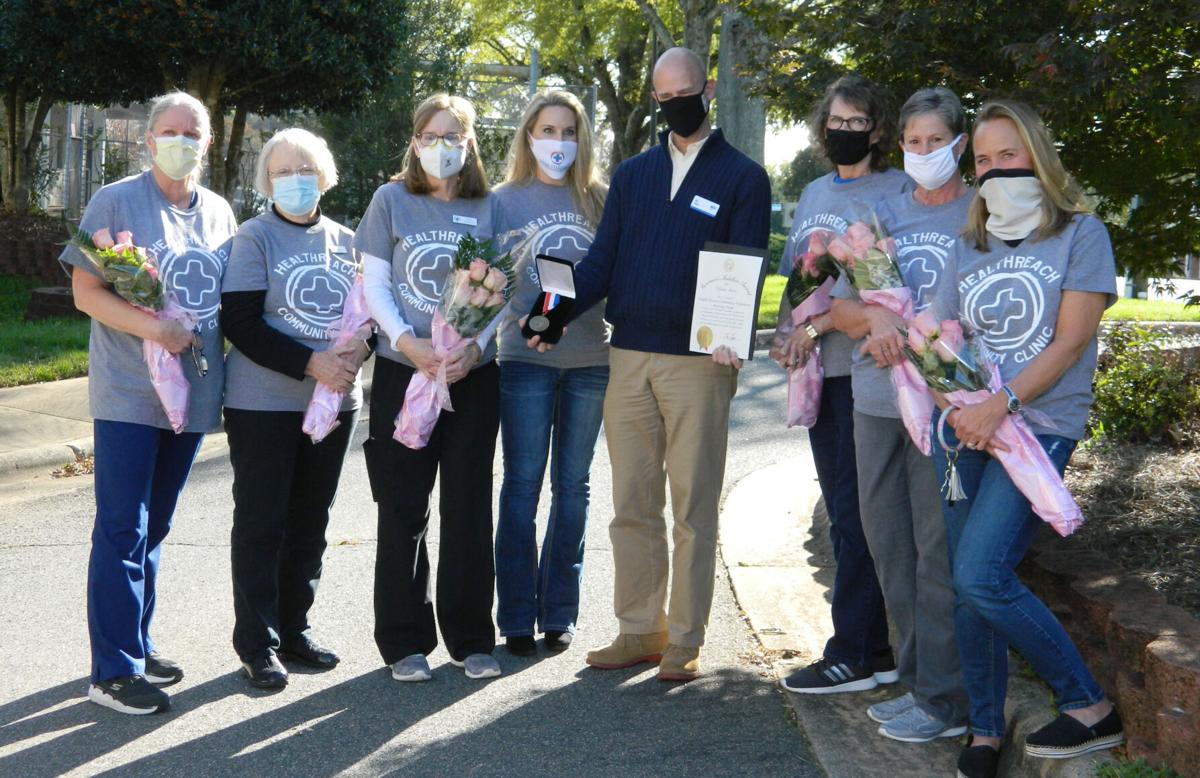 Bob Young of United Way of Central Carolinas presents the certificate and medallion to the nurses and Executive Director Sabrina Niggel, (fourth from left) following the annoucement. Those pictured are (from left) Sophia Pine, Cheryl Bernhardt, Claudia Moody, Niggel, Young, Sharon Hemric, Molly Meusburger and Jennifer Al-Hussaini. Nurse Frankie Sue Coleman was not able to be at the event. 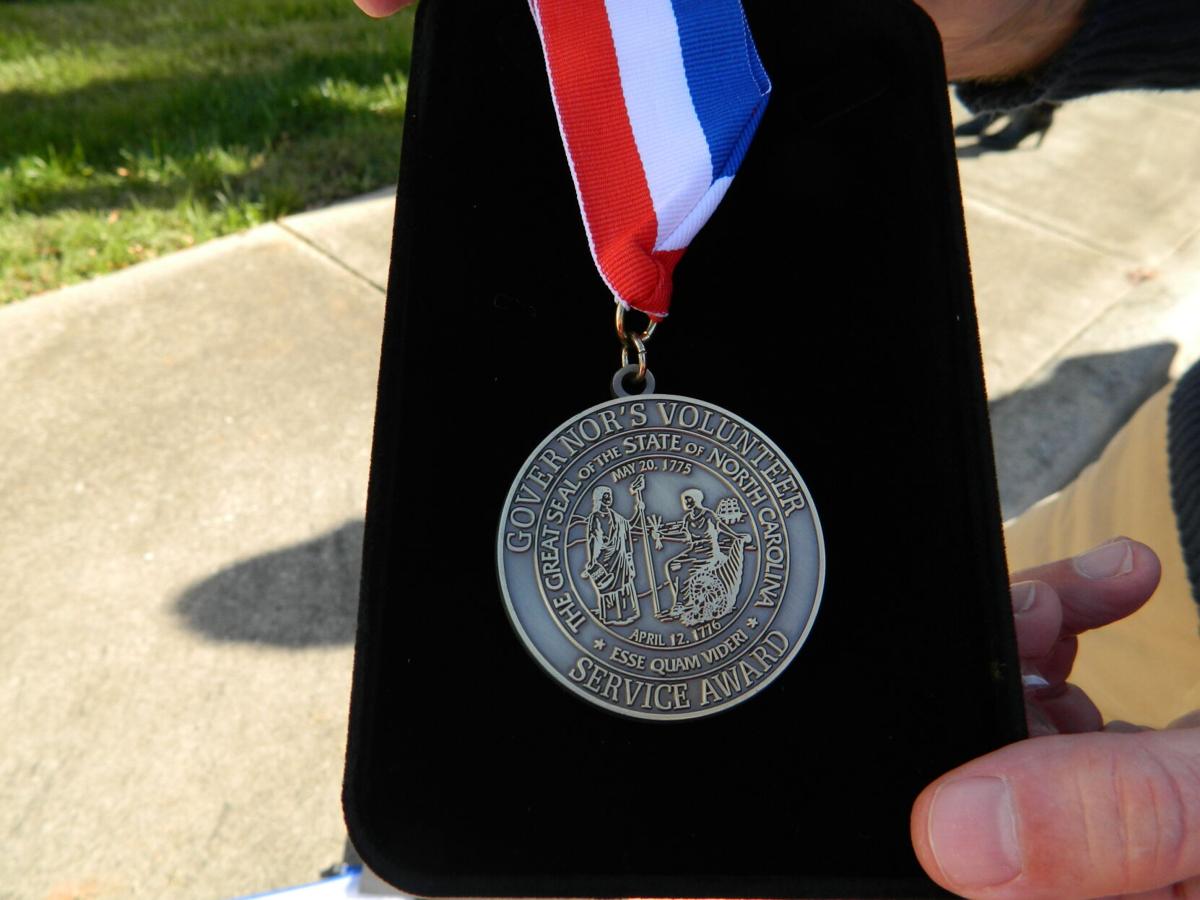 A close-up look at the Governor's Medallion Award.

It was indeed a red letter day for the HealthReach Clinic on Tuesday as the seven volunteer nurses were honored as the winners of the Governor’s Volunteer Service Award.

While the governor was unable to make a personal appearance to present the award, the special presentation was conducted by Bob Young, director of community impact with United Way of Central Carolinas in Charlotte, which oversees the program of the volunteer awards.

The selection of this prestigious award is usually concluded in the spring, Young noted. However, “the governor has been busy,” he said with a smile.

On Tuesday afternoon, a group gathered outside the clinic for the special event including the HealthReach Clinic Medical Director Dr. Stephanie Sittler, HealthReach board members Martha Michael, chairperson; Kathryn Nusbaum, Jim Bullard and Mayor Miles Atkins. Also on hand for the event was Sen. Vickie Sawyer, who has been a supporter and advocate of the clinic noted Executive Director Sabrina Jones Niggel, PhD. At this time, the reason for the event was still a surprise to the nurses.

Niggel welcomed everyone, and with a huge smile said, “I’m so excited, and so amazed I could keep this a secret.”

Niggel then introduced Young who told the group that a nomination had been sent in for the Governor’s Volunteer Award, and he was going to read that letter and “they just might recognize some names mentioned.”

It was in January that Niggel had submitted a letter nominating the team of volunteer nurses for this prestigious award.

Her letter continued as she shared more about the nurses and their dedication at the clinic and to the patients.

“Simply put, this incredible team of volunteers makes our work possible. As the only free medical clinic in Iredell County, HealthReach provides free medical care and medications to our uninsured neighbors with limited means to pay for care. Last year we were able to provide more than 4,000 medical appointments, dispense more than 10,700 prescriptions, and process more than 1,000 labs — all made possible by our highly skilled and efficient nurses, NONE of whom is paid for her work. Our clinic’s entire nursing staff is volunteer!!”

The letter highlighted the many services the “Super Seven” performs at the clinic in addition to some stories of how they go beyond the nursing responsibilities to make sure their patients are treated with care and respect.

“On many occasions, our patients compose heartfelt letters and even make homemade gifts for our nurses to express their appreciation,” Niggel shared.

In her letter, Niggel praised the nurses for their care and compassion they show the patients and how skilled they are and how they go above and beyond the call of duty.

“Individually, our nurses are kind, competent, and highly skilled. As a team, they are unmatched. They work seamlessly to ensure that all tasks are completed thoroughly and efficiently and that no patient slips through the cracks,” Niggel wrote. “Without prompting, they coordinate among themselves their schedules to ensure that sufficient nursing staff is available for every hour our clinic is open. They take their jobs as seriously as any paid employee; it always makes me laugh when they ask in advance if they can take time off for vacation.”

As Young was reading the letter and displaying the group’s award certificate, others from the clinic emerged with a bouquet of pink roses for each recipient.

Following this first announcement, Young had still more good news to share as he announced that the “Super Seven” team from HealthReach was selected from among hundreds of nominees as one of the state’s Medallion Award winners.

“Only 20-25 winners achieve that recognition,” Young shared in an earlier email to Niggel.

He told the group that the medallion award is “not just for the region but for the entire state” and that he had a letter from Gov. Roy Cooper for the team.

“Amazing” was the word that Bernhardt used to describe how it felt to receive the honor.

The nurses were very humble in their acceptance of the award as they pointed out that it was a teamwork effort.

“We try to give good care. We love our patients. We love being here. First, it’s teamwork” Bernhardt said.

Meusburger likewise shared this sentiment as she said noted she was “very honored to receive the Governor’s Award. It’s overwhelming” to which she was quick to add, “We are a team. We work really well together.”

This is the second consecutive year that someone from HealthReach has received this volunteer award. Last year, Bill and Mary Hurt were named winners.

Following the presentation, everyone was invited to enjoy refreshments.

The following is a list of those booked at the Iredell County Detention Center on felony and driving while impaired charges from Nov. 19-25. T…

Hardworking, loyal, dedicated, genuine and true friend are just a few of the words that describe Ford Martin Stewart, otherwise known as “Pike…

Police: Mooresville man shot in the arm during home invasion

The Mooresville Police Department is investigating a home invasion that resulted in one person being shot.

The following deeds were filed in the Iredell County Register of Deeds office from Nov. 15-19. For more information regarding specific plots o…

The following persons registered for assumed names in the Iredell County Register of Deeds office from Nov. 15-21.

Bob Young of United Way of Central Carolinas presents the certificate and medallion to the nurses and Executive Director Sabrina Niggel, (fourth from left) following the annoucement. Those pictured are (from left) Sophia Pine, Cheryl Bernhardt, Claudia Moody, Niggel, Young, Sharon Hemric, Molly Meusburger and Jennifer Al-Hussaini. Nurse Frankie Sue Coleman was not able to be at the event.

A close-up look at the Governor's Medallion Award.