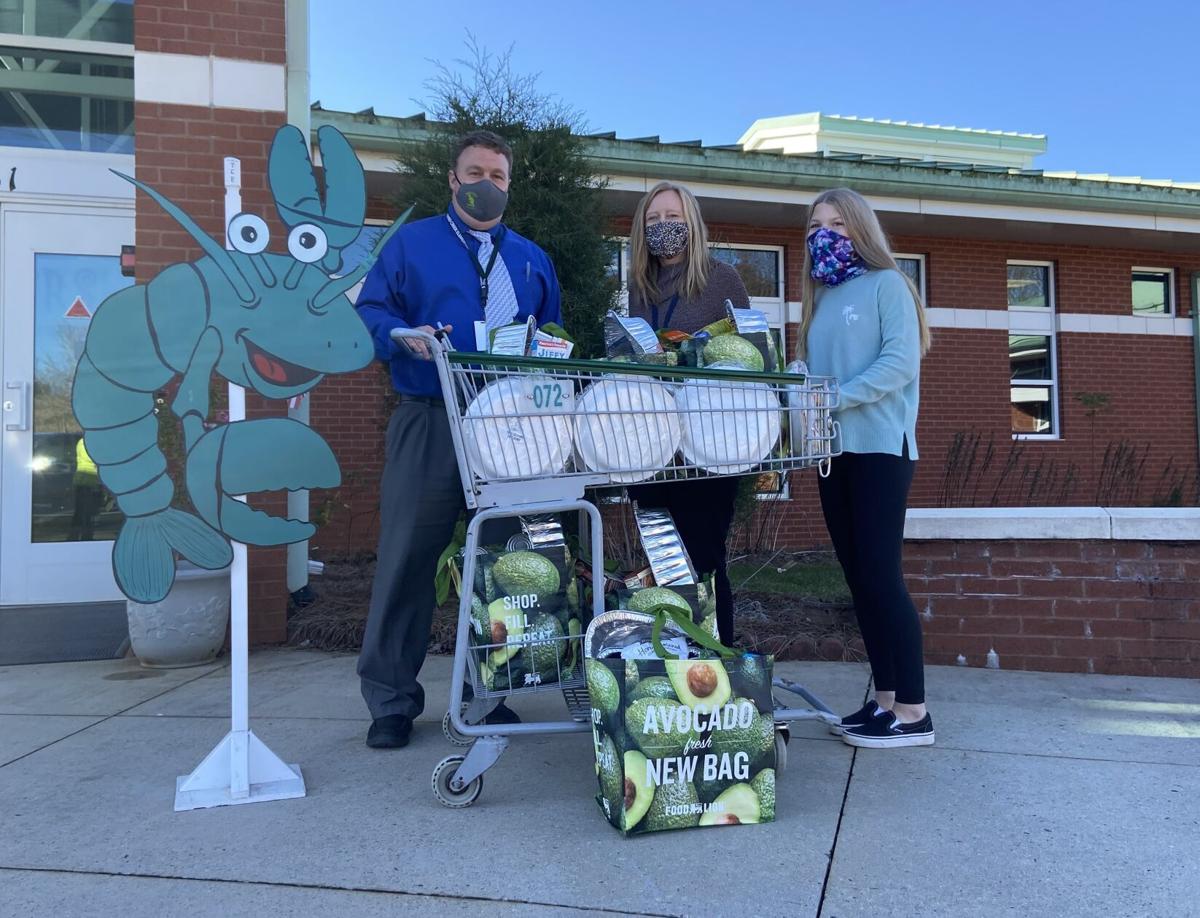 Third Creek Elementary School Principal Jason Humphrey and Assistant Principal Jennifer Dalton showcase some of the meals brought by Lauren Jones, a student from The Brawley School, on Thursday in Statesville. Brawley School students put together 100 Thanksgiving baskets for families in need at three Iredell-Statesville schools. 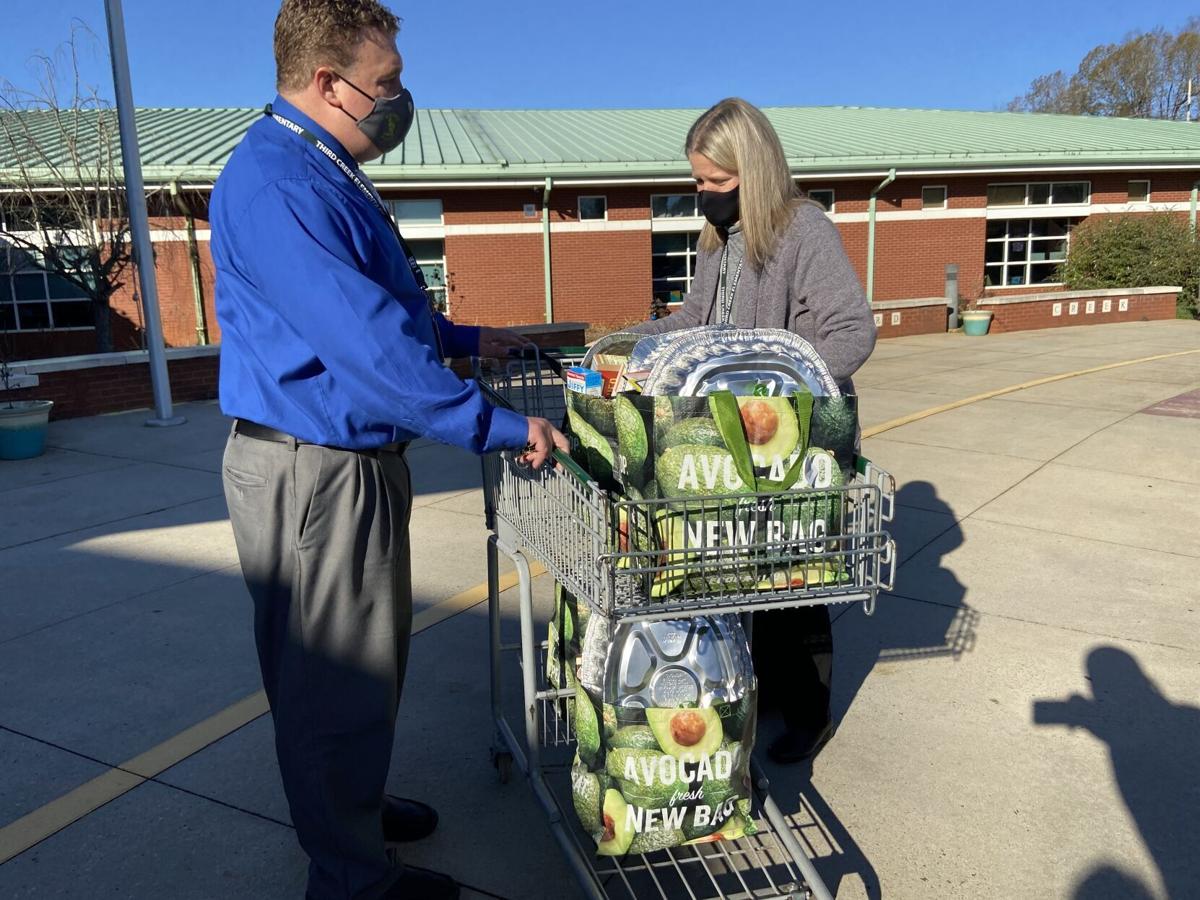 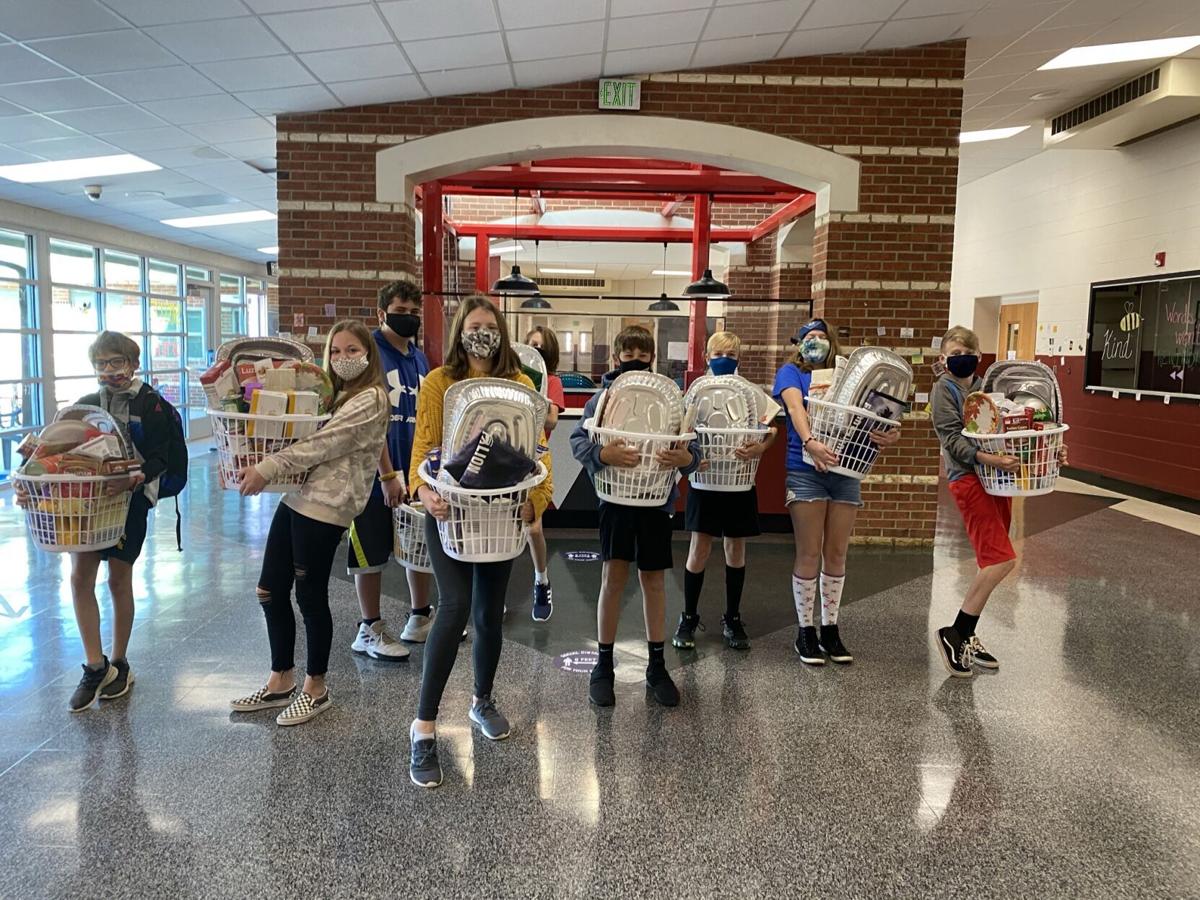 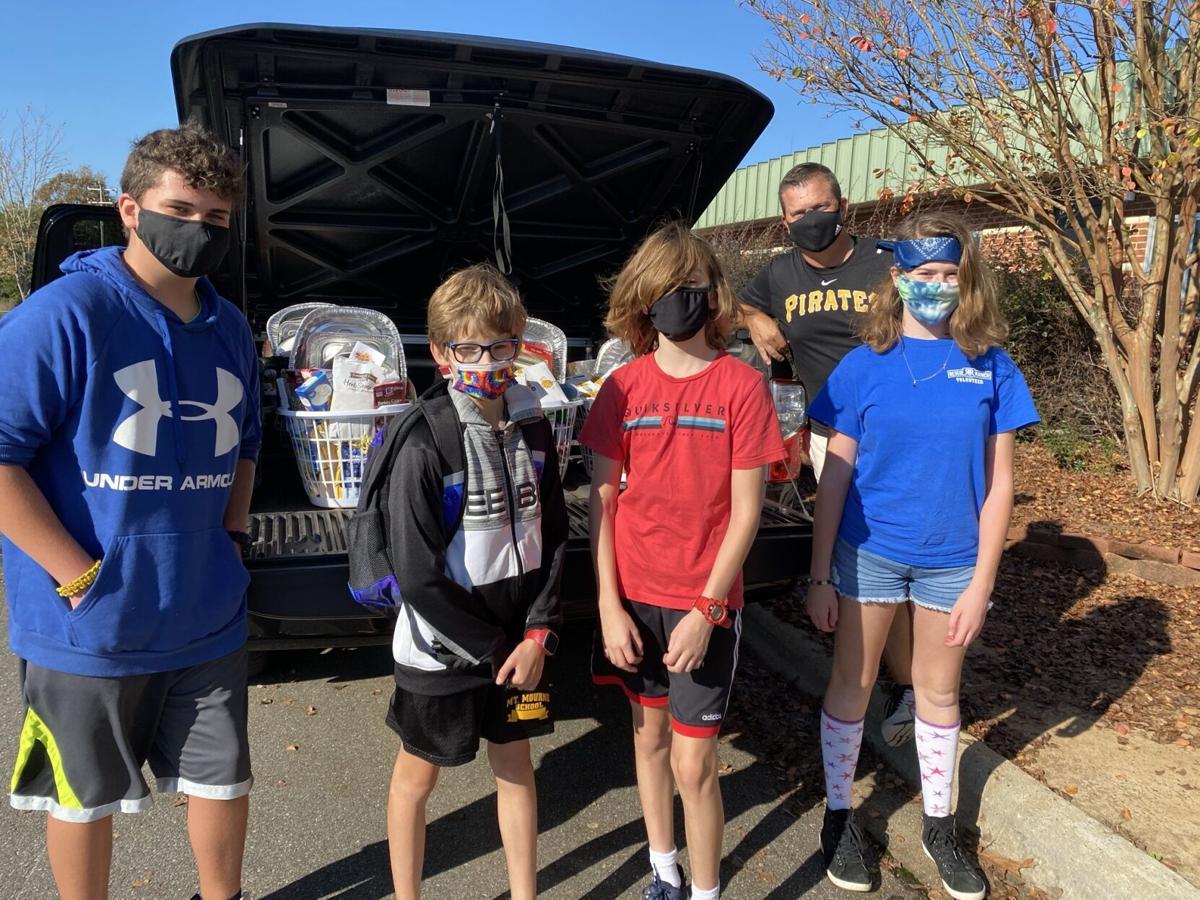 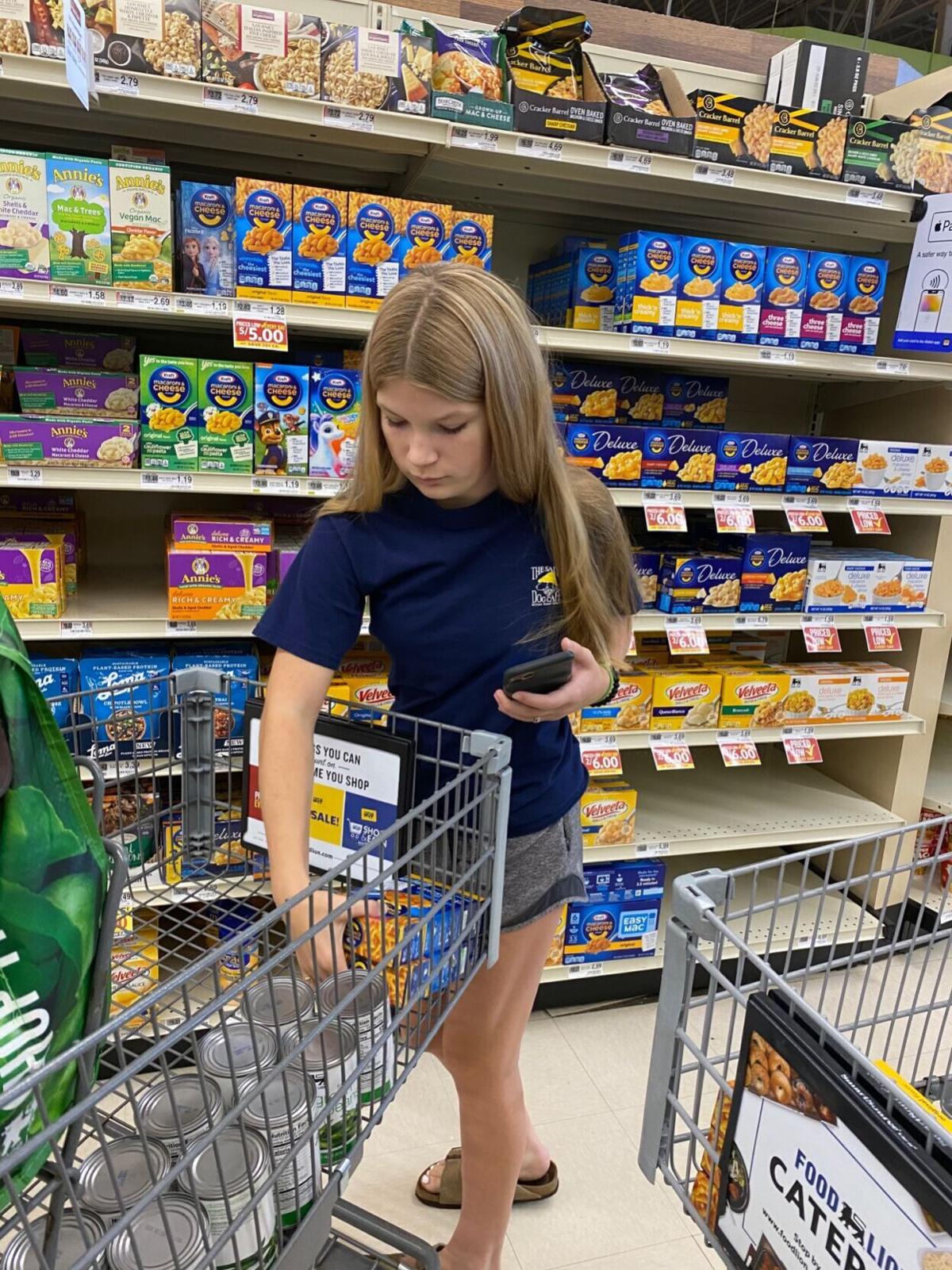 For Jones, it was as simple as caring about others, even if you've never met them.

"I just think if I were in their spot, I'd just be appreciating having Thanksgiving," Jones said.

Jones helped shop for supplies for many of the baskets and got a $1,000 donation to help with the effort. Students from Brawley put together 100 baskets in total for next week's holiday. The baskets include many of the traditional parts of a Thanksgiving meal, along with a gift certificate to Food Lion so families could also buy a turkey or ham. The baskets were distributed to the two Third Creek schools and NB Mills Elementary in Statesville.

"She's just very motivated to help and give back," said Mark Shinkaruk, principal of The Brawley School. "She's really kind of been a quiet kid in the background. But then that she's grown up here now, as an eighth-grader, she's really matured and had a lot of ownership in the project. She's put a ton of time into it, her mom and family as well, too. They've been a big part of it as well."

Jones and Shinkaruk said the school's parent-teacher organization and student government played a role in organizing the effort, but teacher Sally Webb played a pivotal part in making it happen.

"She's an incredible person. She's a perfect example of our teachers. They certainly don't do it for the money. They do it because they're passionate about education and passionate about kids, and she just fits that bill perfectly," Shinkaruk said.

"We're an IB school, and part of the International Baccalaureate program is to try and get kids interested in service. We've done service projects for a while now and each year, it just seems to grow and get bigger," Shinkaruk said.

When the phone rang on Wednesday, Third Creek Elementary School principal Jason Humphrey wasn't expecting to find out that some of his students would be receiving a timely holiday gift.

"Truthfully, it was a surprise. We didn't know about it until yesterday," Humphrey said.

Humphrey said about 90% of the students at the elementary school qualify for free or reduced lunches, meaning the surprise was one that would be well received.

"Not all the families would have what you call a traditional Thanksgiving, they may not have the means to do that. This helps, and with a year like we've had now, what these students did to help brighten next weekend for the families means a lot for us."

He said the school works with its social workers and others to identify which students and families would be best served by receiving a basket.

A LASTING IMPRESSION: Pete Meletis touched many lives, leaves a hole in the heart of Iredell County

The following deeds were filed in the Iredell County Register of Deeds office from Nov. 2-13. For more information regarding specific plots of…

When her radio station got a call from country music star Luke Combs and found out it won a 2020 Country Music Association Broadcast Award, Mo…

‘My heart is overjoyed’

On Nov. 13, a group of volunteers gathered at Upper Praise Ministries, 442 W. Moore Ave., Mooresville, to pack 200 bags of food, which were th…

A 20-year-old died in an NC jail. His family says a lack of information makes them skeptical of sheriff's claims.

The family of a man who died at the Iredell County Detention Center is asking for answers, but so far are finding few.

PHOTOS; Pets of the Week

Third Creek Elementary School Principal Jason Humphrey and Assistant Principal Jennifer Dalton showcase some of the meals brought by Lauren Jones, a student from The Brawley School, on Thursday in Statesville. Brawley School students put together 100 Thanksgiving baskets for families in need at three Iredell-Statesville schools.