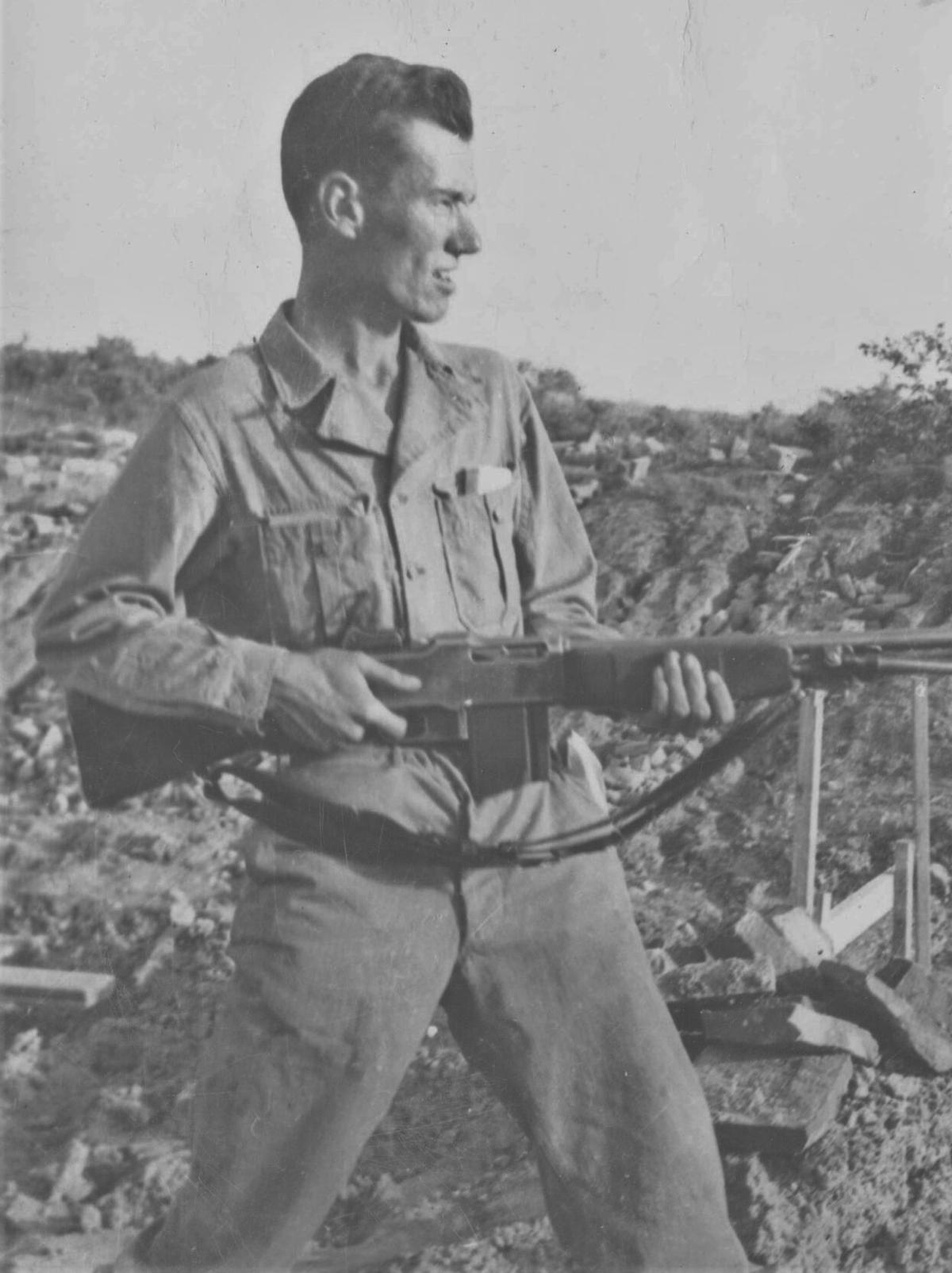 O.C. Stonestreet Sr. was part of the infantry division that landed at Omaha Beach around D-Day. 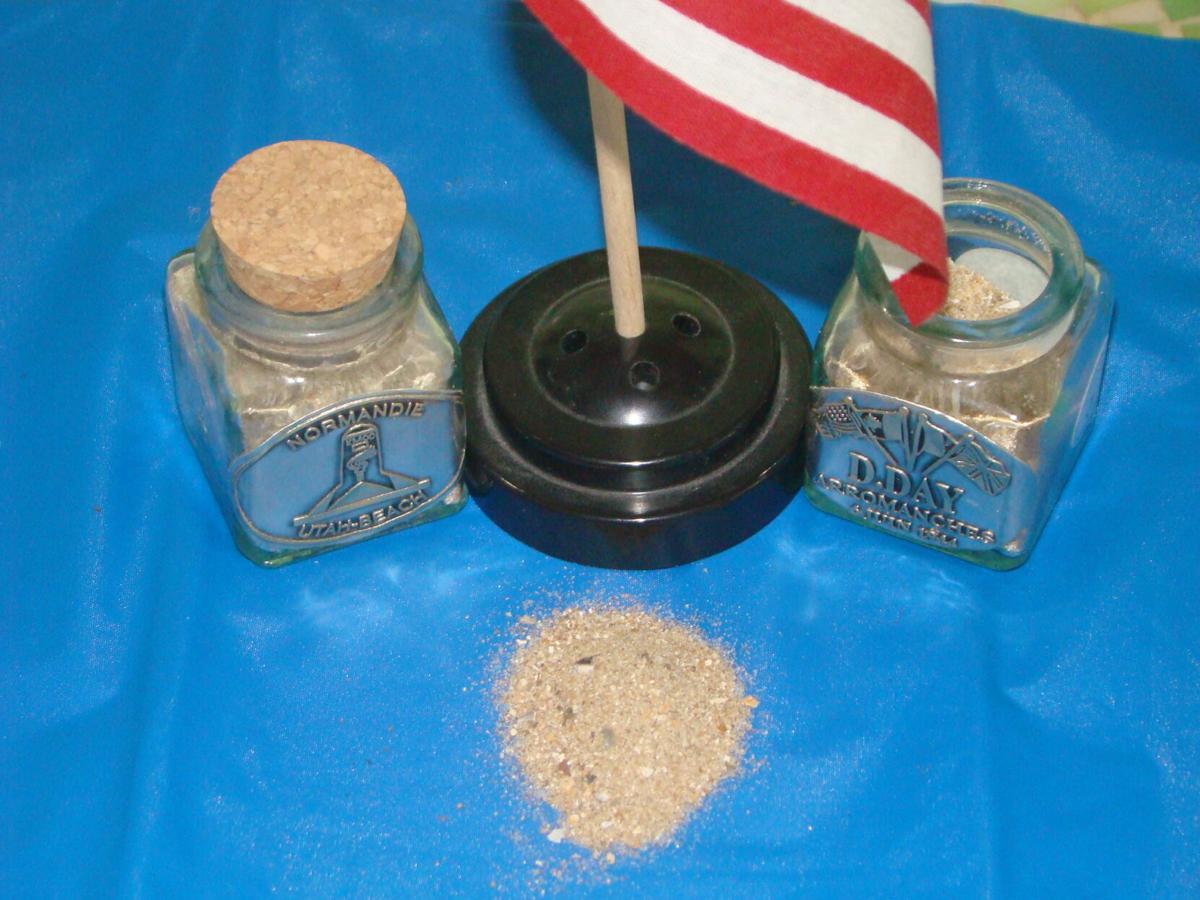 These jars contain sand from the beaches at Normandy.

First of all, let me apologize for last Sunday’s column. It was not what I had originally intended to send in; today’s column should have run last week. Last Sunday was the 6th of June, 77 years to the day after the greatest amphibious invasion in the history of the world, when Allied Forces came ashore on the coast of Normandy, France, on D-Day 1944, during World War II.

The R&L ran five photos on page A-2 in last Sunday’s newspaper concerning D-Day. The first and largest photo, showed assault troops crammed in a landing craft called a “Higgins boat,” heading toward one of the landing beaches. In Navy nomenclature, the vessel was a LCVP, the initials standing for “Landing Craft, Vehicle, Personnel.” It was designed to hold 36 fully-armed soldiers.

Try to visualize for a moment what that might have been like. The men probably got little sleep the night before. Then the men endured the choppy crossing of the English Channel between two storm fronts, then climbed down a cargo net into a bobbing landing craft, wearing full equipment. The men would have gotten wet, cold and would most likely have lost their breakfast—had they been inclined to eat any--in the landing craft. And assuming they actually made it to the beach, there was the short, terrifying run across the sand and shale to the sea wall, under fire from Nazi artillery and small arms.

My father, Private First Class O. C. Stonestreet Jr., of the 29th “Blue and Gray” Infantry Division, was one of those who came ashore on Omaha Beach that morning, or perhaps a day or two later, and fought their way across France and into Hitler’s Germany. The invasion was code-named “Operation Overlord.”

A little less than a year after the Allied landing in Normandy, Hitler took his own life on April 30, 1945 and Germany surrendered, unconditionally, on May 6, 1945, bringing to a close the war in Europe. May 6th was popularly known as “V-E Day,” for “Victory in Europe.”

My mother, these men and their wives and sisters had grown up during the Great Depression and with much justification they have been called, “The Greatest Generation.”

The men were around 20 years old when they and their British and Canadian allies went ashore on Sword, Gold, Juno, Utah or “Bloody Omaha” Beach. Now 77 years later, those once-young men who came ashore under fire are in their nineties or close to it, or in their graves. Most of these men are almost all now gathered in a better place.

We used to have about 10 World War II veterans who were members at our church. Today, I believe there is just one, my friend Gill Kling, a veteran of the Second World War and the Korean War and of whom I have written. Gill sat in the pew behind me. I thanked him for his service to our country.

If you know a Second World War veteran, don’t wait too long to speak with him (or her) of those days, and be sure to thank that veteran for his or her service.

There are several very fine movies about D-Day and the events leading up to it. Perhaps the best is the 1998 Tom Hanks movie, “Saving Private Ryan.” The flashback to the D-Day landing at the beginning of the film is perhaps the closest we can come to that reality. Also good is the 1962 movie, “The Longest Day,” based on the excellent book by Cornelius Ryan. When this movie played on TV, dad would tell my brother and me that he had been in “the original cast.”

Eisenhower’s account of the Normandy landings and his part in the War as a whole is told in a simple, direct style in his 1948 book, “Crusade in Europe.”

My friend Don Steele, a Marine Corps veteran, and his daughter, Kelly Steele, had the opportunity to visit the beaches at Normandy a few years ago and brought back photos of one of the huge war cemeteries just behind the beach. They were also kind enough to bring me two small jars of beach sand. I value those jars among my prize possessions. My father could have stepped on that sand 77 years ago as he and his comrades fought their way inland to free Europe.

Had the men not stormed the beaches, a recent church service might have been conducted in German or Japanese, if it were allowed to be held at all. It’s something to think about.

Watch Now: The mystery of the mask

A third person has been charged in connection with the death of a Cornelius man at a Mooresville park.

An Iredell-Statesville Schools parent remains upset with one of its board members after he used a word she said were discriminatory.

With staff members holding the front doors open wide, 101-year-old Fern Honeycutt was welcomed Tuesday afternoon as the first patient at the S…

Mooresville town board districts need to be redrawn

According to 2020 U.S. Census data, Mooresville’s population has grown by more than 50 percent in the last 10 years, causing the town’s four v…

The following deeds were filed in the Iredell County Register of Deeds office from Aug. 27-Sept. 1. For more information regarding specific pl…

The entire student body of South Iredell High School packed into the football stadium, not for a game, but to remember the lives lost on Sept.…

O.C. Stonestreet Sr. was part of the infantry division that landed at Omaha Beach around D-Day.

These jars contain sand from the beaches at Normandy.