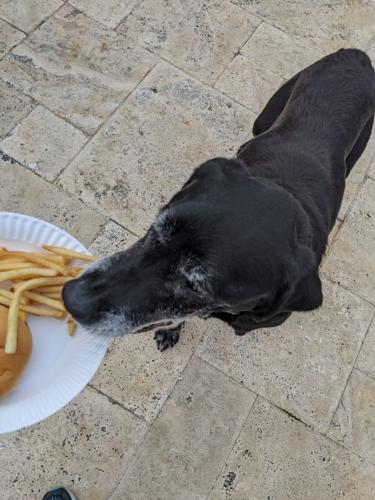 Whiskey is ready for his cheeseburger and fries. 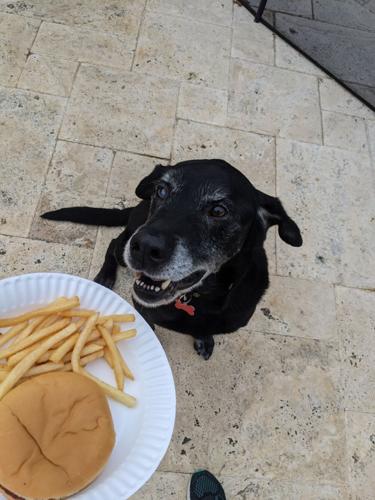 Whiskey waits for his cheeseburger and fries. 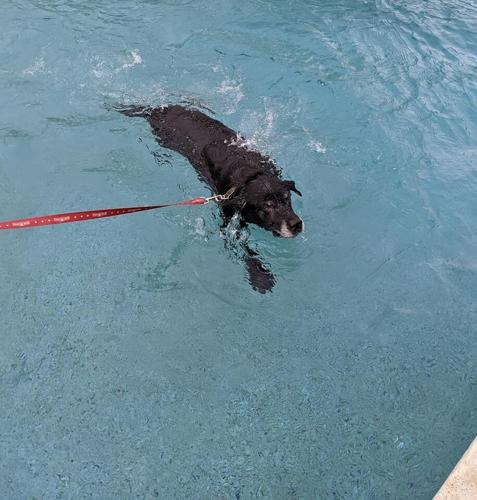 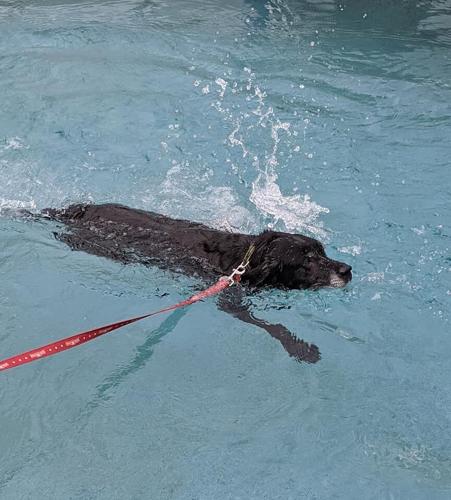 Whiskey takes a swim in his foster family’s pool. 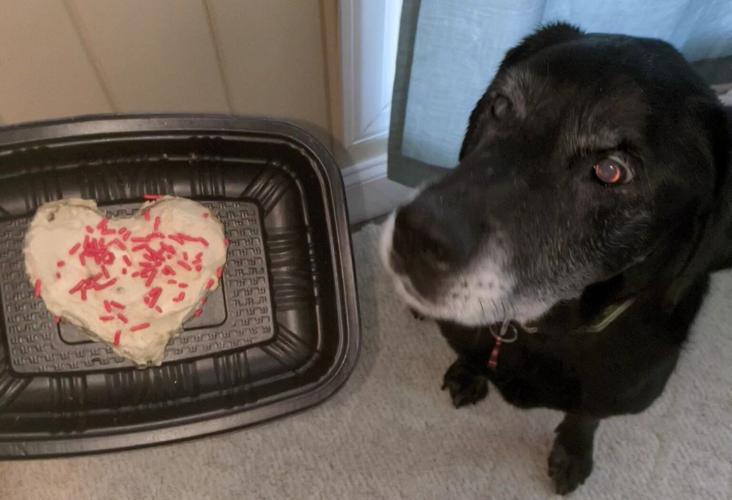 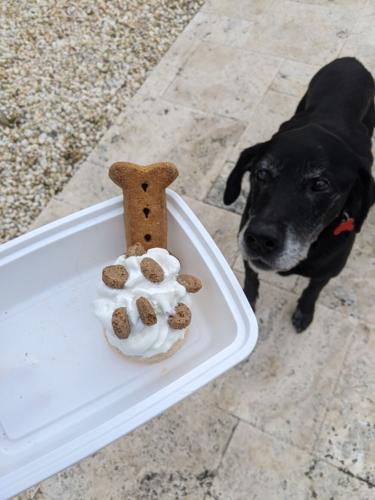 Whiskey is given some homemade treats. 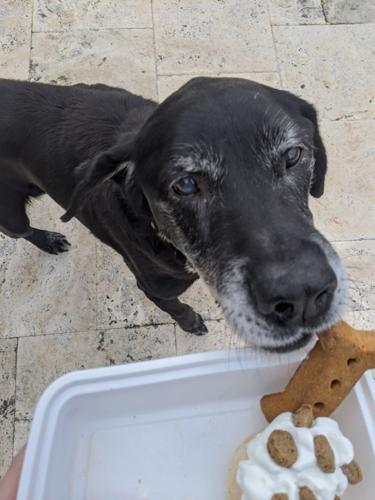 Homemade treats are one of Whiskey’s favorite things.

Brandy Fowler knows her foster dog, Whiskey, will not live much longer but she’s determined to give the Labrador retriever as much love and life experiences as she can in his final few months.

His bucket list has included a doggie sundae, creating art with peanut butter, going on a marshmallow hunt with his Easter basket, his very own big bed and a swim in the family pool.

Whiskey’s adventures are now a sensation, and his followers look forward to the latest check off of an item on his bucket list. “Whiskey Wednesdays” have attracted a following on social media and Whiskey has become a celebrity of sorts.

“We’re trying to give him as much love as we can,” Fowler said.

Whiskey’s story began in January when Rescue Ranch Adoptions Program Director April Arrington learned of an older black lab that was surrendered to a rural shelter by his owner. He was estimated to be between 13 and 14 years old with some medical problems. Arrington said Rescue Ranch pulled Whiskey, a pure bred lab, and a second dog from the kill shelter. “We didn’t know too much about him,” Arrington said.

Arrington said she realized taking in an older dog meant the likelihood of health issues. He limped due to a problem with one of his back legs, had arthritis and was heartworm positive — something not uncommon in shelter dogs in the south, she said. Heartworms are caused by mosquitos.

After getting him to Statesville, they realized his issues were much worse. It was discovered he has cancerous tumors on his spleen and likely has other cancers in other parts of his body.

Arrington was not deterred in her mission to give Whiskey the best life possible even if his time was limited. “”He is a perfectly grand dog,” she said.

That’s where Fowler came into the picture. A part-time employee at the Rescue Ranch, Fowler signed on to foster when the adoption program came to be late last year. After her first foster got adopted, she got a call from Arrington about Whiskey. As owners of a yellow lab, Fowler said, her family has a soft spot for that breed and she immediately agreed to take Whiskey into her home.

“He looked sick but we didn’t realize how sick he was,” she said. A visit to a couple of vets and an ultrasound revealed the tumors. One vet told her “we want you to know we don’t think he has much time left,” Fowler said.

Her son suggested doing some of the same things they’ve done for their dogs, and the idea of a bucket list was born. “We want to give them the opportunity to experience things we don’t know if he’s experienced before,” she said.

The quality of life they’re providing seems to be paying dividends for Whiskey. More than three months after being told his life expectancy could be anywhere from days to a few months, Whiskey’s holding his own, Fowler said. He’s on pain medication and treatment for arthritis.

Arrington said the decision was made not to treat his heartworms. “We’re giving comfort care at this moment,” she said.

Fowler said Whiskey seems to be responding to his bucket list activities. She said he’s not particularly interested in toys. Whether it’s his personal preference or he didn’t get the chance to play with toys when he was younger is unknown. Food is the way to Whiskey’s heart, she said.

“Treats are his favorite,” she said. And he tends to prefer homemade treats as opposed to a store-bought biscuit.

She said he’s made friends with their lab and went swimming in the family pool.

But human interaction seems to be what Whiskey craves most of all. Fowler said he’s regularly on her heels, following her wherever she goes.

And not knowing how much longer he will be able to follow her around, Fowler said, she’s determined to make sure he gets as much love and support as possible.

Arrington said thanks to the Fowlers, Whiskey will have the best life possible, no matter how long that is.

She hopes that Whiskey’s story will encourage others to consider fostering or adopting a senior dog, and, she said, she hopes more people will sign on to foster. “We’re always in need of fosters,” she said.

Fowler said being a foster means learning to let go, whether it’s through adoption or by giving a dog like Whiskey a loving home for the remainder of his life. Giving a foster dog a home, she said, means that dog gets a better life and there’s room to pull another from a kill shelter.

Whiskey is an example of that. Despite his many health problems, Arrington said, he hasn’t lost that lab spirit or personality. “He’s an absolute love,” she said.

Whiskey plays with his foster brother.

AIDS in Kenya: Homabay County, where fish are traded for sex

AIDS in Kenya: Homabay County, where fish are traded for sex

Whiskey is ready for his cheeseburger and fries.

Whiskey waits for his cheeseburger and fries.

Whiskey takes a swim in his foster family’s pool.

Whiskey is given some homemade treats.

Homemade treats are one of Whiskey’s favorite things.