KENOSHA, Wis. — Kyle Rittenhouse’s legs gave out under him as a clerk read the verdict of a jury that had been deliberating for close to 3 1/2 days — not guilty on all counts.

Rittenhouse, 18, had pleaded self-defense in the deadly Kenosha shootings that became a flashpoint in the debate over guns, vigilantism and racial injustice in the U.S.

He was charged with killing Joseph Rosenbaum and Anthony Huber and seriously injuring Gaige Grosskreutz with an AR-style semi-automatic rifle on Aug. 25, 2020, in the unrest that unfolded in Kenosha following the shooting of Jacob Blake, a Black man, by a white Kenosha police officer.

Rittenhouse and his legal team steadfastly held that the Antioch, Illinois, teen was in Kenosha to help protect businesses from rioters and acted in self-defense when confronted by Rosenbaum, Huber and others.

“He wants to get on with his life,” defense attorney Mark Richards said. “He has a huge sense of relief for what the jury did to him today. He wishes none of this ever happened. But as he said when he testified, he did not start this.”

As soon as the first verdict was read, Rittenhouse’s legs began to shake violently, he broke into tears and he started to collapse. Crying, he hugged defense attorney Corey Chirafisi. In the gallery, his mother Wendy Rittenhouse began to cry quietly. Across the aisle, Huber’s girlfriend Hannah Gittings was crying as well.

The verdict in the politically combustible case was met with anger and disappointment from those who saw Rittenhouse as a vigilante and wannabe cop, and relief and a sense of vindication from those who regarded him as a patriot who took a stand against lawlessness and exercised his Second Amendment right to carry a gun and to defend himself.

Appearing outside his Racine law office after the verdict, Richards spoke of the "living hell" Rittenhouse went through, but said little about the men who were shot. As he did during the trial, Richards painted Rosenbaum as the villain of the case.

"I don't want to speak ill of the dead, but he wasn't a nice person and everyone knows it," he said.

Richards criticized the way prosecutors handled the case and took a shot at Rittenhouse's original attorneys, John Pierce and Lin Wood. He also said he didn't believe Rittenhouse regretted coming to Kenosha on the night of the shootings armed with an AR-15-style rifle strapped to his chest.

"I don't believe he does," Richards said. "You know, if he had to do it all over again and the same thing was going to happen and your life was going to be put in a living hell for a year and you're not going to know whether you are going to be a free man, he would say I'm not going to go. But we can't undo time."

Kenosha County Assistant District Attorney Thomas Binger, the lead prosecutor in the case, said his office was disappointed with the verdict but it “must be respected.”

"We are grateful to the members of the jury for their diligent and thoughtful deliberations,” Binger said. “The Kenosha community has endured much over the past 15 months, and yet we remain resilient and strong. We ask that members of our community continue to express their opinions and feelings about this verdict in a civil and peaceful manner."

Rittenhouse had faced the possibility of life in prison if convicted of the most serious charges against him.

Going in, many legal experts said they believed the defense had the advantage because of provisions favorable to Rittenhouse in Wisconsin self-defense law and video showing him being chased at key moments. But as jury deliberations continued, there was growing speculation that Rittenhouse could be convicted on some of the charges or that the jury could be deadlocked.

Richards, the defense attorney, said that Rittenhouse wants to be a nurse and that he is in counseling for post-traumatic stress disorder and will probably move away because “it’s too dangerous” for him to continue to live in the area. Asked whether his client would keep a low profile, Richards said, "I hope so."

President Joe Biden called for calm, saying that while the outcome of the case “will leave many Americans feeling angry and concerned, myself included, we must acknowledge that the jury has spoken.”

Ahead of the verdict, Democratic Gov. Tony Evers announced that 500 National Guard members stood ready in case of trouble. But hours after the jury came back, there were no signs of any major protests or unrest in Kenosha.

As he released the jurors, Circuit Judge Bruce Schroeder assured them the court would take “every measure” to keep them safe. None offered any comment when reporters called out questions about the verdict.

Huber's parents, Karen Bloom and John Huber, said the outcome “sends the unacceptable message that armed civilians can show up in any town, incite violence, and then use the danger they have created to justify shooting people in the street.”

Gittings, Huber’s girlfriend, said before the verdict she was not hopeful that Huber — who she and supporters felt had acted as a hero in trying to stop Rittenhouse after he shot Rosenbaum — would receive justice.

"Honestly, I am just ready for it to be over and done with at this point," Gittings said as she waited in the courthouse hallway earlier in the week while the jury was still deliberating. "It's just really a closure thing for me, because no matter what the outcome is, it won't change anything."

Gittings said she felt people were so wedded to their opinions of Rittenhouse's actions that the verdict would not shift their beliefs. "That's the big discrepancy that I hope people will wake up to," she said. "It's two sides of fearmongering."

"I think the jury focused on Rittenhouse's testimony and believed him when he said he had no choice but to do what he did," Cafferty said. "That combined with the video evidence they relied on. And once they found him not guilty on the first count, the dominoes fell from there."

Wisconsin Lt. Gov. Mandela Barnes, who is Black and a Democratic candidate for U.S. Senate, denounced the outcome. He, like many civil rights activists, saw a racial double standard at work in the case.

“Over the last few weeks, many dreaded the outcome we just witnessed," Barnes said. "The presumption of innocence until proven guilty is what we should expect from our judicial system, but that standard is not always applied equally. We have seen so many black and brown youth killed, only to be put on trial posthumously, while the innocence of Kyle Rittenhouse was virtually demanded by the judge.”

Political figures on the right welcomed the verdict and condemned the case brought against Rittenhouse.

Mark McCloskey, who got in trouble with the law when he and his wife waved a rifle and a handgun at Black Lives Matter protesters marching past his St. Louis home in 2020, said the verdict shows that people have a right to defend themselves from a “mob.” Now a Republican candidate for U.S. Senate in Missouri, McCloskey attracted attention from the media and demonstrators when he appeared outside the courthouse earlier in the week.

Fifteen minutes after the verdicts, the National Rifle Association tweeted the text of the Second Amendment.

The Kenosha case was part of an extraordinary confluence of trials that reflected the deep divide over race in the United States: In Georgia, three white men are on trial in the killing of Ahmaud Arbery, while in Virginia, a trial is underway in a lawsuit over the deadly white-supremacist rally held in Charlottesville in 2017.

The Associated Press contributed to this story.

Watch now: Kyle Rittenhouse breaks down on the stand

Watch now: Kyle Rittenhouse says he 'did what he had to do' to stop threat

Kyle Rittenhouse closes his eyes and cries as he is found not guilt on all counts at the Kenosha County Courthouse in Kenosha, Wis., on Friday, Nov. 19, 2021. (AP Photo/Kenosha News, Sean Krajacic) 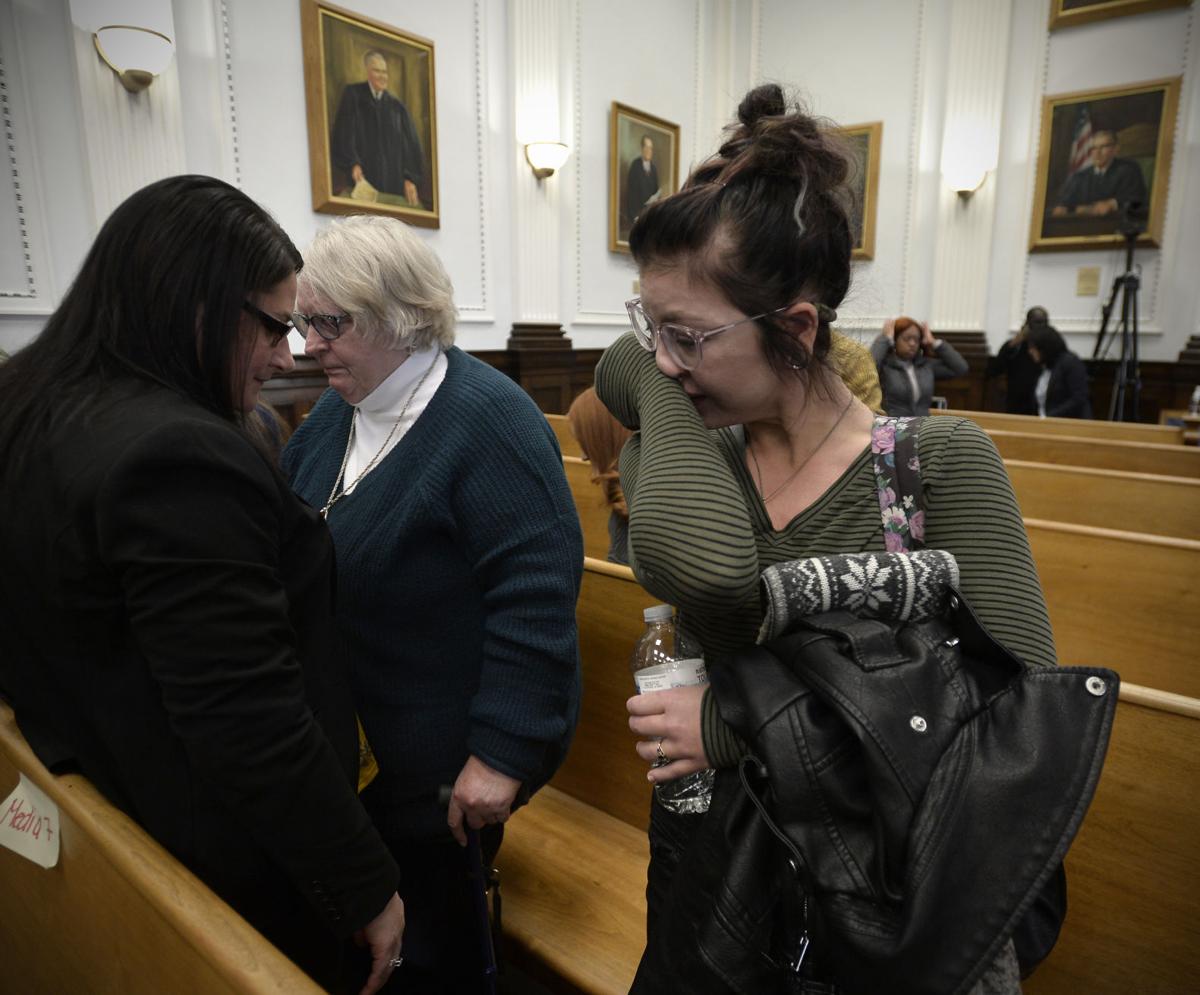 Hannah Gittings, the late Anthony Huber's girlfriend, right, cries after Kyle Rittenhouse is found not guilt on all counts at the Kenosha County Courthouse in Kenosha, Wis., on Friday, Nov. 19, 2021. 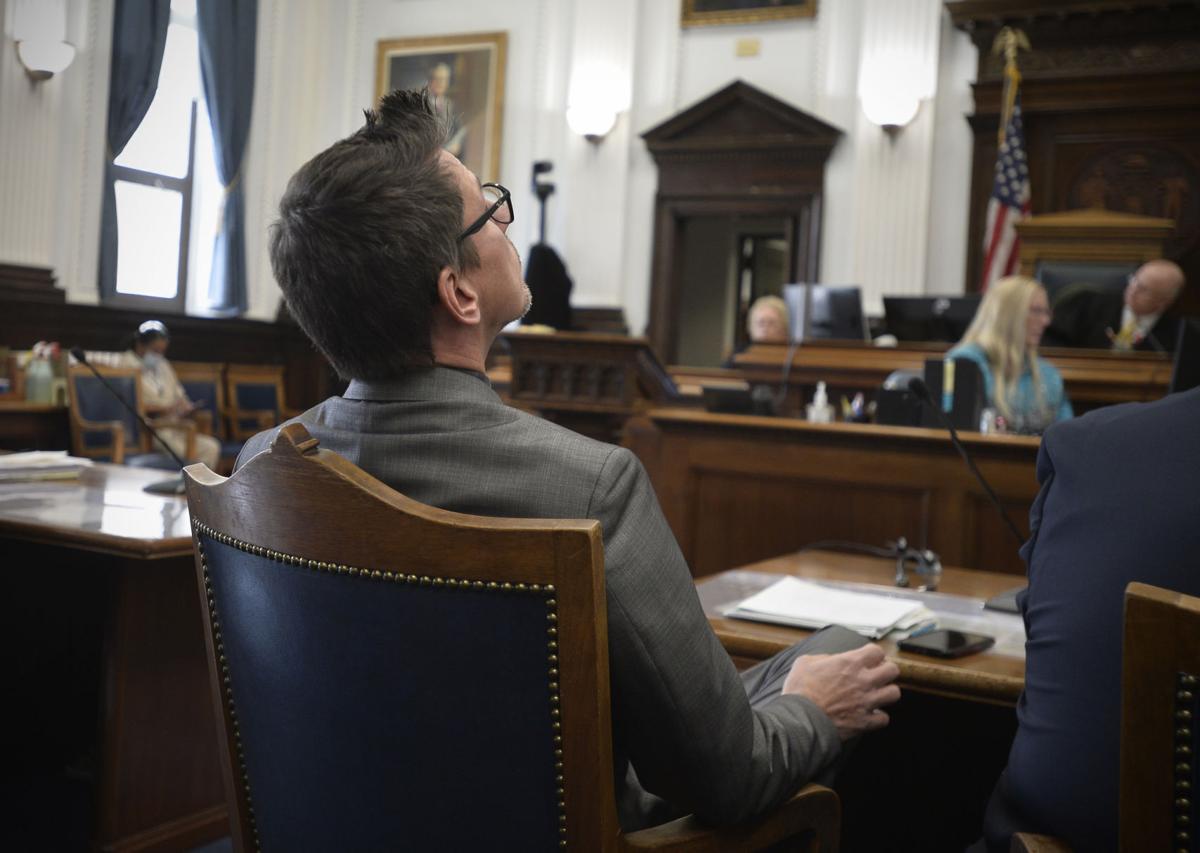 Assistant District Attorney Thomas Binger, center, holds his gaze to the ceiling as he waits for a verdict in Kyle Rittenhouse's trial to be read at the Kenosha County Courthouse in Kenosha, Wis., on Friday, Nov. 19, 2021. 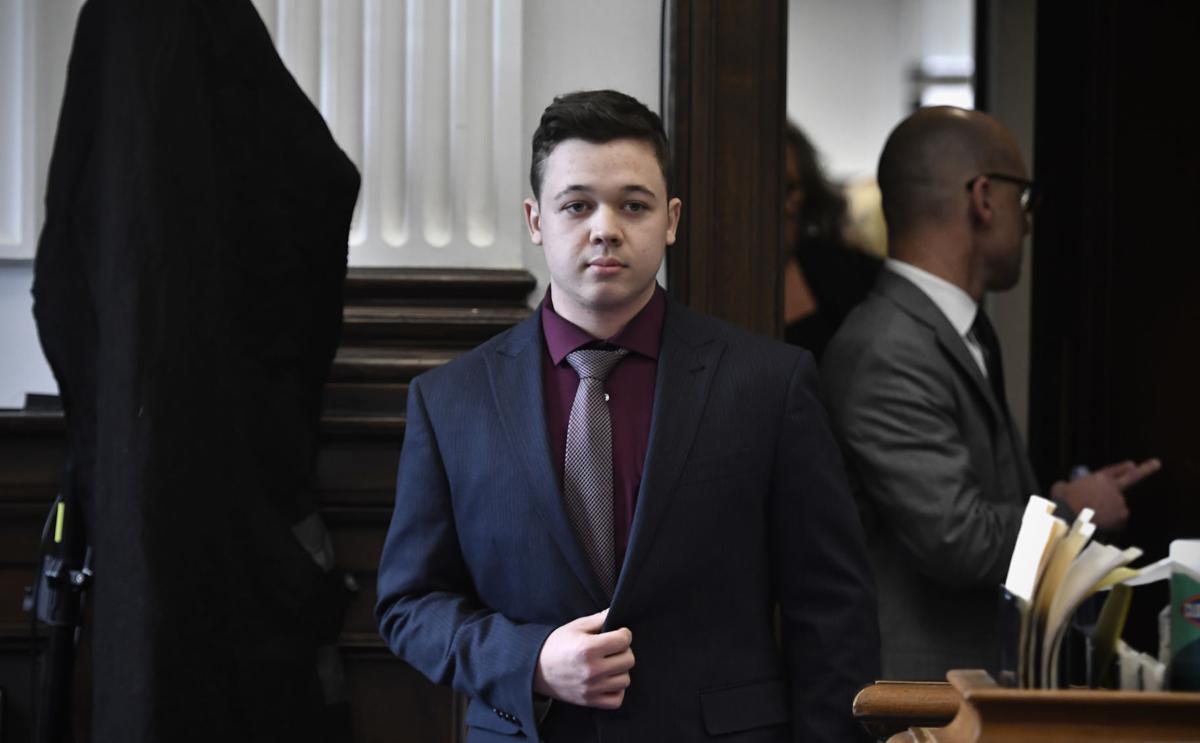 Kyle Rittenhouse enters the courtroom to hear the verdicts in his trial. He was found not guilt on all counts at the Kenosha County Courthouse in Kenosha, Wis., on Friday, Nov. 19, 2021. 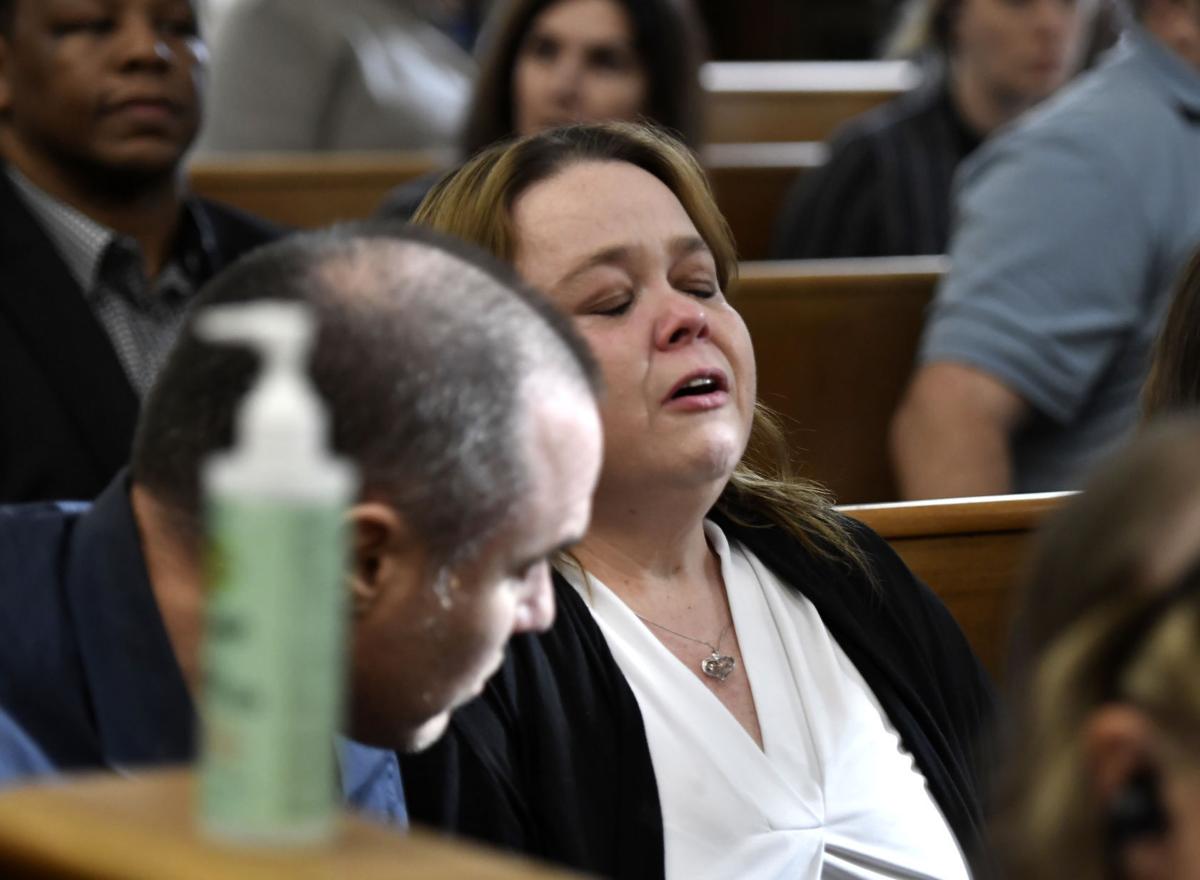 Kyle Rittenhouse's mother, Wendy, reacts as her son, Kyle Rittenhouse, is found not guilt on all counts at the Kenosha County Courthouse in Kenosha, Wis., on Friday, Nov. 19, 2021.