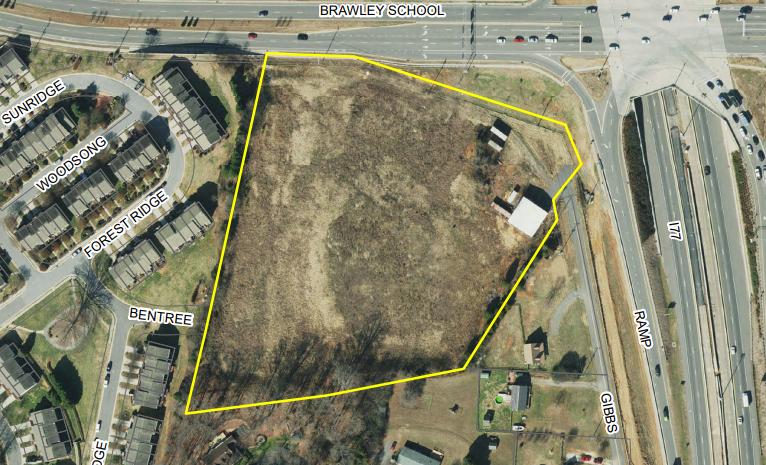 The area where the planned Car Caves Motor Condo is planned is shown.

An example of the planned Car Caves Motor Condos is pictured.

A brief round of applause and a chorus of thank yous filled the normally-quiet air of the board chambers in Mooresville Town Hall on June 10. After more than an hour of public comment was heard by members of the Mooresville Planning Board from residents of the Silverhook and Gibbs Road communities, board chair Steve McGlothlin made the official announcement that a request meant to facilitate an “automotive country club facility” at the end of North Gibbs Road was not approved, denied by a 4-2 margin.

Stephen Baranyi, a resident of Plymouth Road, a small off-shoot of North Gibbs, walked towards the front of the room to personally thank the board.

“Thank you very much,” he said. “But we all know this is going to happen again.”

Just 28 days later, many of the same residents of that neighborhood were on hand to speak again in the same room, this time in front of the Mooresville Board of Commissioners. However, this time, there was no celebration after the decision came down. The town board went against the recommendation of the planning board, unanimously approving the request and shocking those in the Gibbs Road community.

Now that community has filed suit against the Town of Mooresville, the prospective developers, Carroll Capital Investments, and the current property owners, James and Terri Sides, in Iredell County Superior Court to get the Board of Commissioners’ decision overturned.

“I told Mr. (Mayor Miles) Atkins that when I moved here 40 years ago, there wasn’t much here. Just a few houses,” Baranyi said. “I said that it took us that long to build what we have here and you came and destroyed it in a single night.”

The building in question, the “automotive country club” which is to be called Car Caves Motor Condos, is a planned 98-unit, 120,000-square-foot building that allows those with classic, exotic, or otherwise collectable cars to store their vehicle in a customizable garage for upwards of $1,500 per month. The garage units will each be roughly 1,200-square-feet and have the ability to link to the town’s water and sewage.

The biggest hangup, for both the Gibbs community, as well as the Mooresville Planning Board, however, laid in the fact that this facility would be built with no plan for direct access to and from Brawley School Road, the main thoroughfare that the property would be adjacent to. This forces those that want to rent units in the planned facility to drive a mile through a residential neighborhood just to get to the front gate of the facility.

“We don’t have any sidewalks in this neighborhood,” Baranyi said. “You see people walking their dogs, riding their bikes, or jogging on this stretch all the time.”

It’s not only the increase in unfamiliar traffic that concerns Baranyi and the rest of the community, it’s what people may be doing within their units, namely drinking alcohol, that concerns the residents. The concerns are based on the ability for each of the 98 units to house alcohol, or a full bar, without needing to face the normal regulations of a bar or restaurant.

“If they put this place in, sooner or later, there’s going to be someone that parties too much and drives down through this residential area and hits somebody,” Baranyi said. “There’s a couple houses that have already almost been hit by people coming in off of Silverhook.”

With help from some neighbors, Baranyi was able to get more than 90 households to sign a petition to stop the rezoning of the property. That’s out of the 150 households that will be affected by the development of the Car Caves location.

The residents of that community are also concerned over the talk of the developers regarding the potential of events at Car Caves in the future. As the facility is currently laid out in plans, there is little parking available for visitors to the property, potentially creating a situation where cars spill out onto North Gibbs Road and all throughout the neighborhood.

“If a bunch of people show up for an event in their own cars, they will have nowhere else to park but along these residential streets,” Baranyi said. “We think that, ultimately, this proposed facility could break many parking ordinances. Every single car that parks on the road turns Gibbs Road into a one-lane road.”

The main crux of the legal argument that the Gibbs Community has presented against Carroll Capital lies in the 10 stipulations of the Comprehensive Land Use Plan as described by the One Mooresville Plan.

Another is, according to Baranyi’s own research, of all of the similar facilities he was able to find across the country, not a single other one was located at the end of a residential road. Another one of these automotive country clubs, Late Apex Storage Condos, is located in Mooresville within Talbert Pointe Business Park on Cayuga Road.

According to the Carroll representatives at both of the meetings with the Town of Mooresville, the facility will have its hours limited, and renters will not be allowed in their units after a curtain time. Their representatives also claim that the company promises to be good neighbors to the local community, and in the plans for the facility there are planned large easements and barriers to help limit the noise that escapes the facility.

This, however, did not change the minds of those that ultimately decided to take legal action against the developers.

“The people who will rent out these units are not going to be from our little community and some of them may not even be from Mooresville,” Baranyi said. “When people party, they tend to do it in places where they aren’t crapping in their own backyard. Well, this would be them crapping in our backyard.

“If the mayor had just come over here and looked at this,” Baranyi continued. “I don’t think he or the town would have approved this. It just doesn’t make sense.”

The hearing for Baranyi & Petitioners v. Town of Mooresville is set for Oct. 4.

Sheriff: Son charged with murder in fire that claimed his parents, brother

A Mooresville man faces three counts of murder and one of first-degree arson from a July incident in which three bodies were found after a fire on Loram Drive in Troutman.

As Gavin Schmidt and his father began moving his collection of Halloween decorations out of the house and into the driveway, cars began slowin…

The area where the planned Car Caves Motor Condo is planned is shown.

An example of the planned Car Caves Motor Condos is pictured.