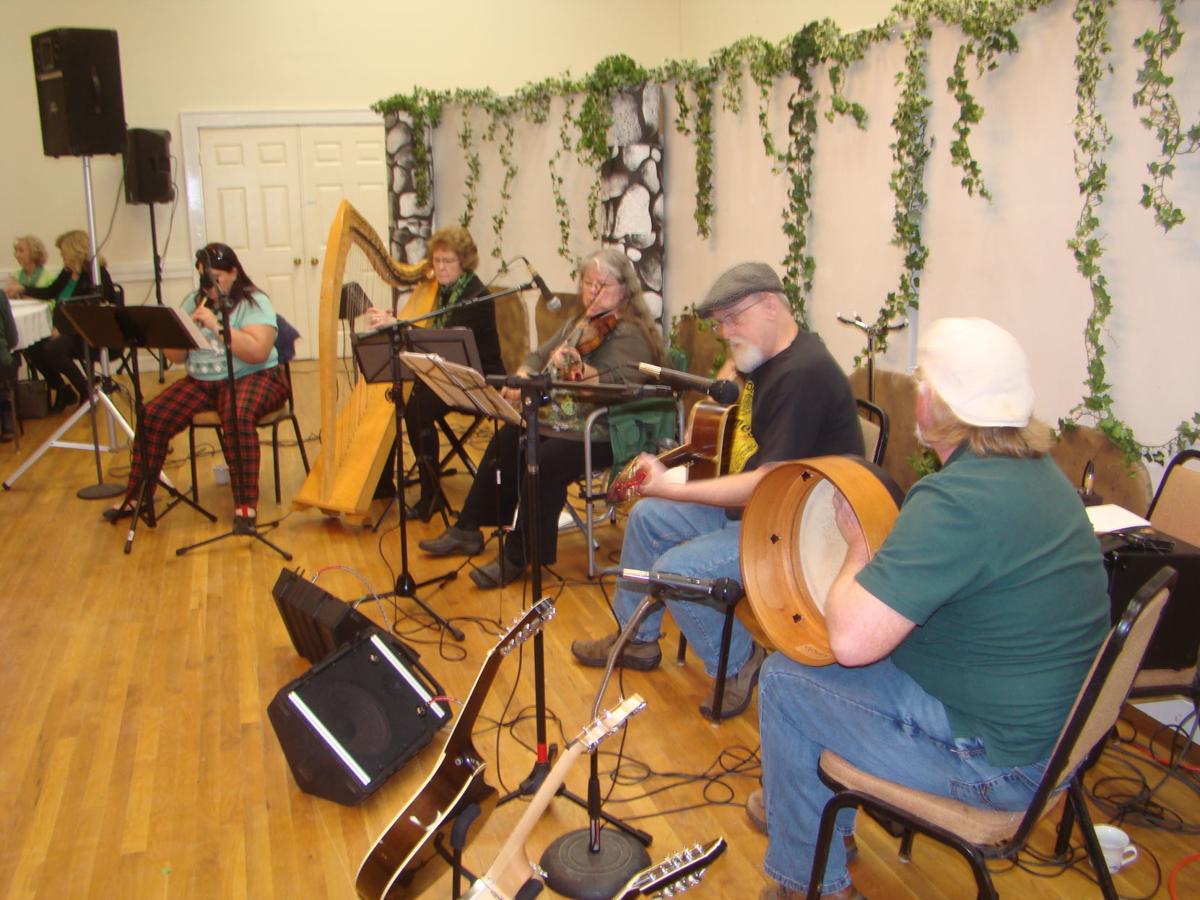 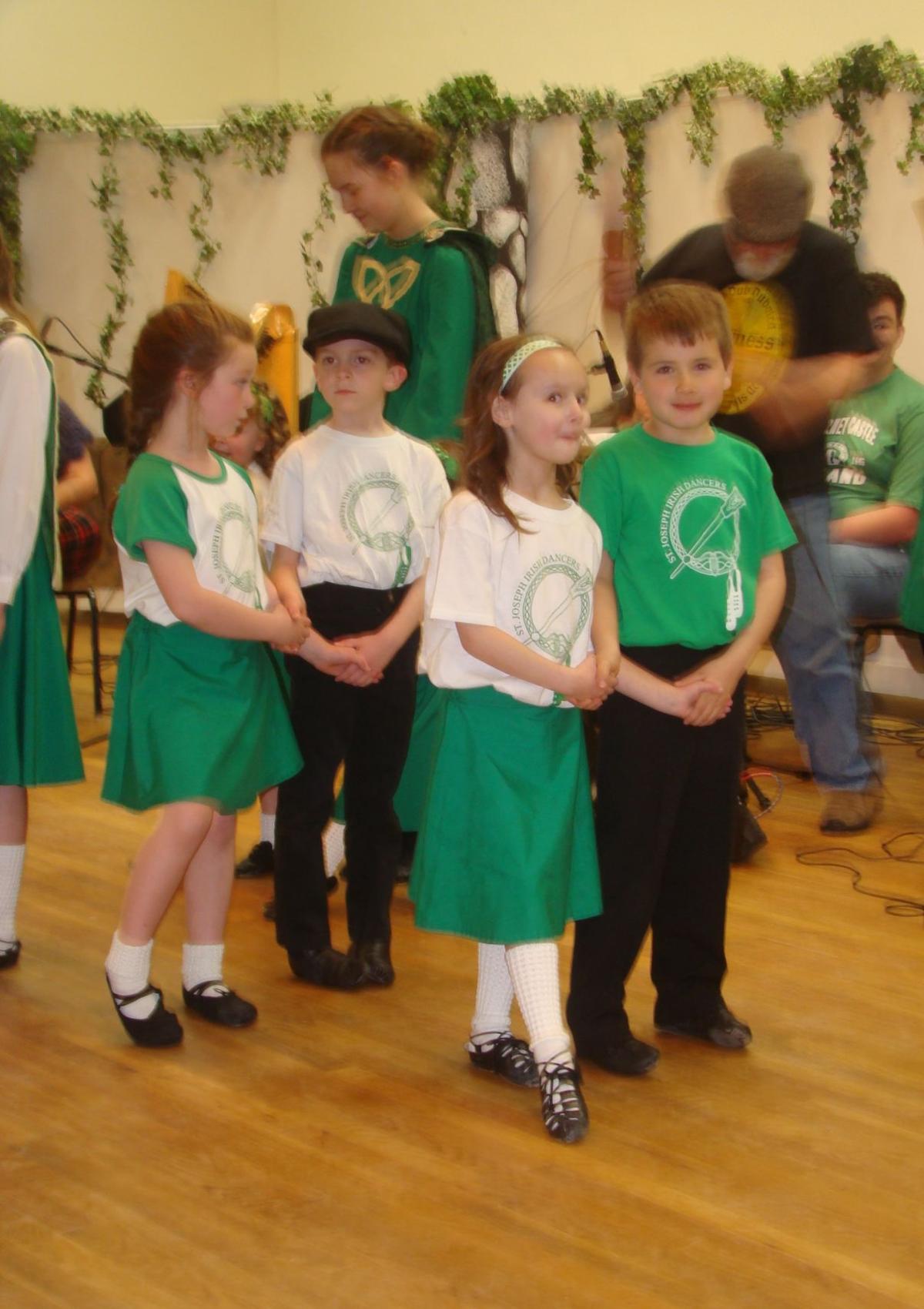 A quartet of dancers gets ready to step out. 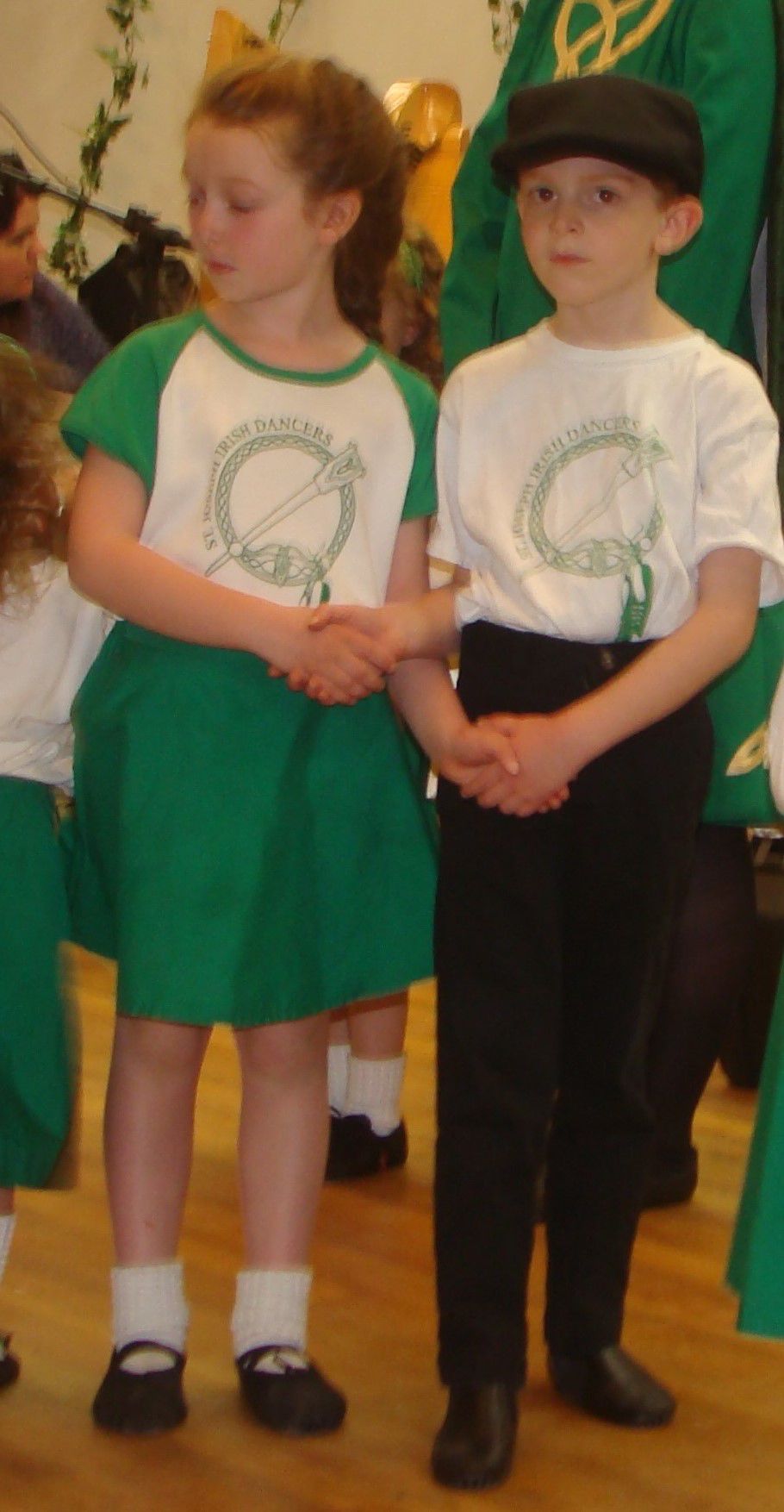 A couple of dancers stand at the ready. 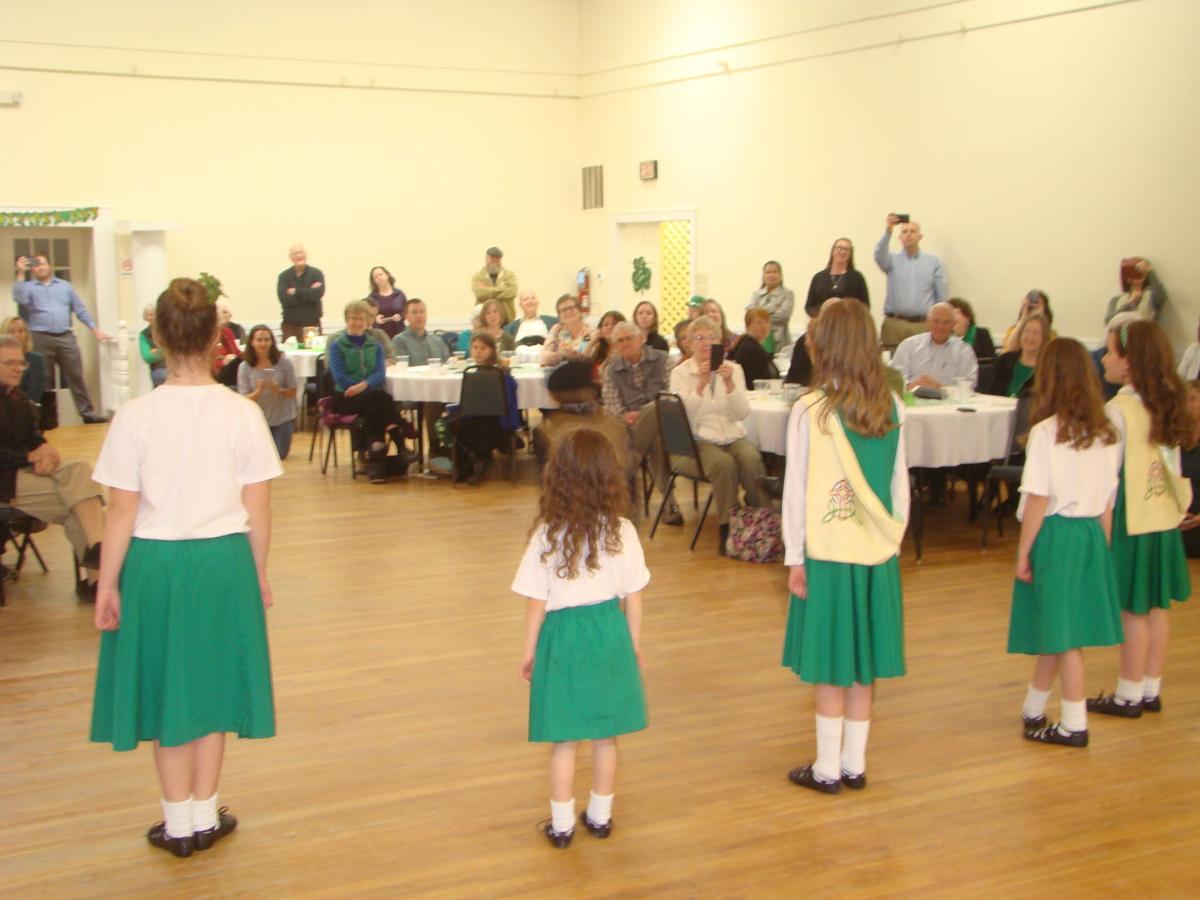 Five dancers pause before the audience. 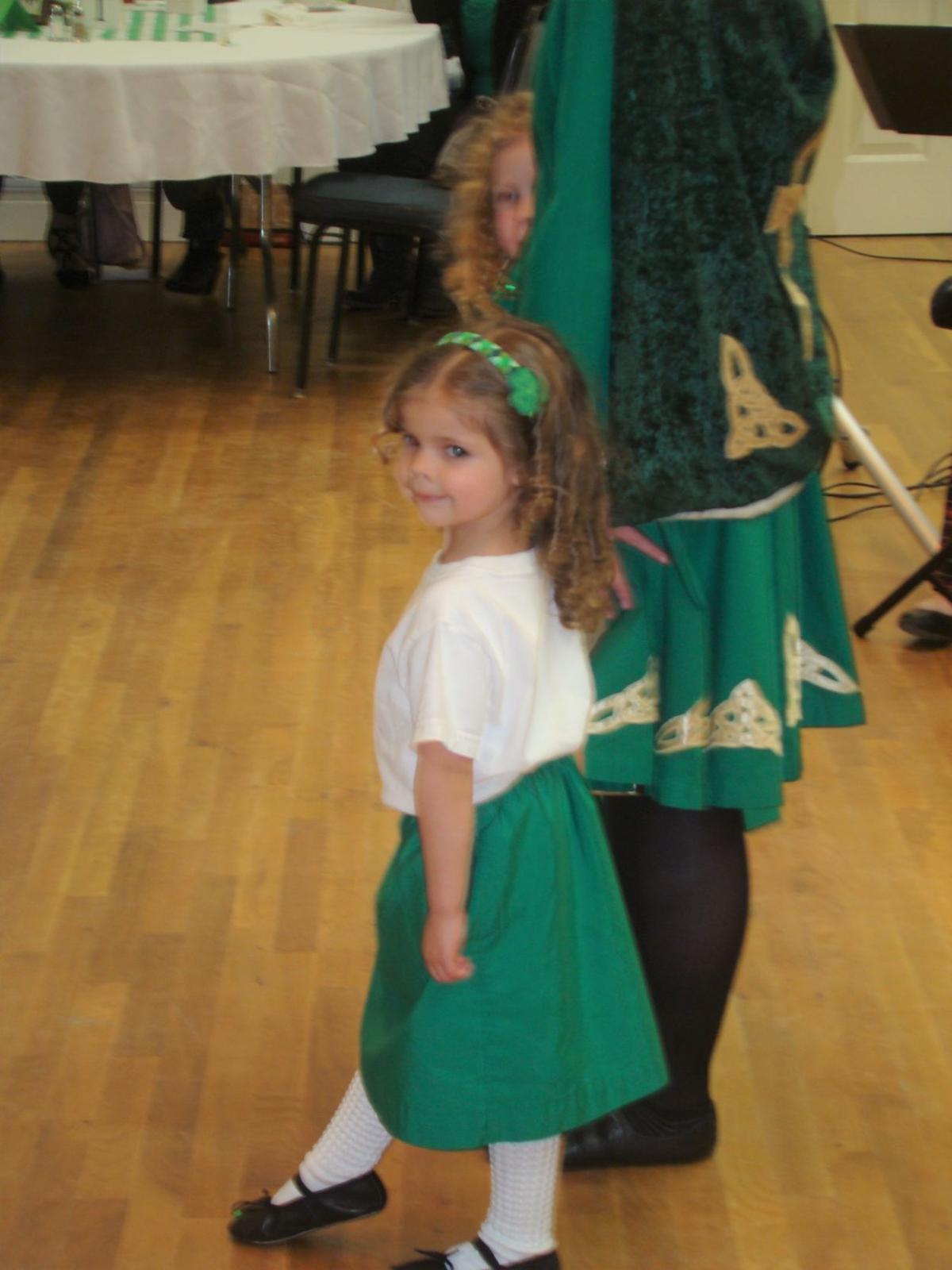 A very young dancer was on hand. Dancers ranged in age from 4 to high school seniors. 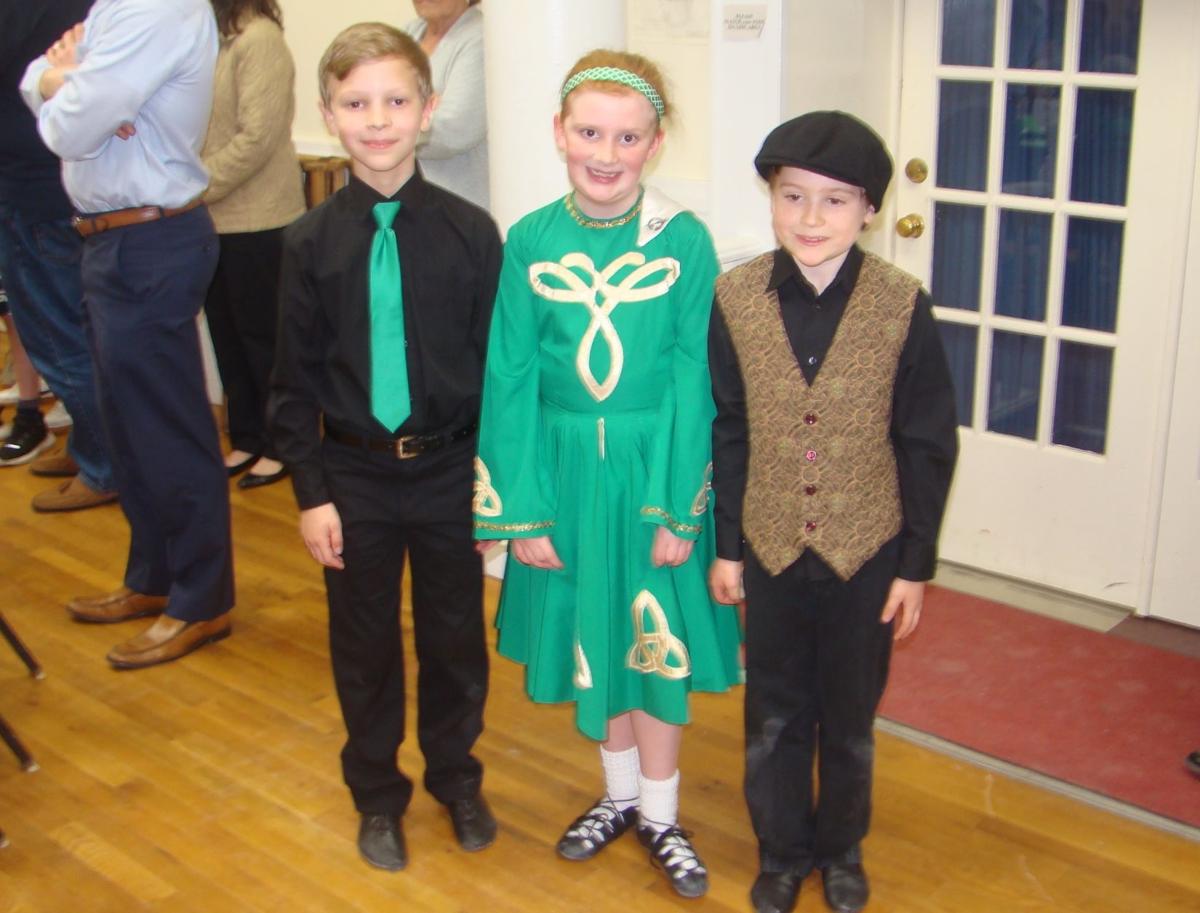 A trio of smartly dressed dancers was on hand.

The Irish first came to America in large numbers around the middle of the 19th century, following the blight that destroyed the potato crop of Ireland for several years, resulting in the death of a million to a million and a half Irish by starvation or disease. In Gaelic, this 1845-1852 disaster is known as “An Gorta Mor,” or “the Great Famine.” Ireland was almost depopulated as many of the surviving Irish fled to Australia, Canada, the United States and elsewhere.

The Piedmont area of North Carolina is also home to a related group, the “Scots-Irish,” folks from the lowlands of Scotland who settled in Northern Ireland before emigrating to the United States beginning in the 1750s.

The point of this too brief introduction is that there are a number of people around Alexander and Iredell counties who feel a kinship and affection with all things Celtic.

A sold-out crowd of these people plus those who just like to hear folk music and see folk dancing wended their way to the Hiddenite Center last Thursday night. They were not disappointed.

You would have thought that Michael Flatley, the Irish-American dancer and star of “Riverdance,” was in Hiddenite. Had he been, he would have felt right at home. As it was, there was enough toe-tapping on the hard maple floor of the center to satisfy all the sons and daughters of the Emerald Isle.

The 40-some fleet-footed members of St. Joseph’s Irish Dancers of Catawba County, wearin’ the green and under the direction of Meg Barrett, all elementary to high school students, got the floor boards to shakin’.

And then there was the traditional Irish music supplied by Erin Tide Band. Led by Veda Bafford, the local ensemble performed on fiddles, guitars, the Irish harp and other instruments from the Auld Country. In addition, as a prelude to the dancing, there were tunes from the Celtic Youth Band.

The dancing and Celtic music would have been enough, but all this was preceded by a traditional meal of Irish stew, potatoes, yeast rolls, and slaw.

The Hiddenite Center has been sponsoring their “Irish Done Right!” around the time of St. Paddy’s Day now for more than 20 years, just one of the many quality educational and cultural offerings from the Center in next door Alexander County.

We should all be so proud of our roots, be they ever so humble, and remember the sacrifices our ancestors made and the courage it took to come to a new land and start a new life.

The following is a list of those booked at the Iredell County Detention Center on felony and driving while impaired charges from Jan. 7-13. Li…

A boy exposed himself after someone logged into a Mooresville Intermediate School classroom session Monday.

A boy exposed himself after someone logged into a Mooresville Intermediate School classroom session Monday.

'This is a dream come true for FeedNC'

A small group gathered Thursday morning for a ribbon cutting in the front yard of 2456 Charlotte Hwy., Mooresville, the address of the newly p…

Last week, the Iredell County Health Department held a drive-thru COVID-19 vaccination at Stumpy Creek Park in Mooresville, and it did not go …

A Mooresville woman, on probation for drug-related charges, was arrested on new charges twice earlier this week.

Rescue Ranch Pet of the Week

Peaches is finished with her elf duties for the year and is looking for her forever home! This big-eared beauty loves doing tricks and spins! …

A quartet of dancers gets ready to step out.

A couple of dancers stand at the ready.

Five dancers pause before the audience.

A very young dancer was on hand. Dancers ranged in age from 4 to high school seniors.

A trio of smartly dressed dancers was on hand.