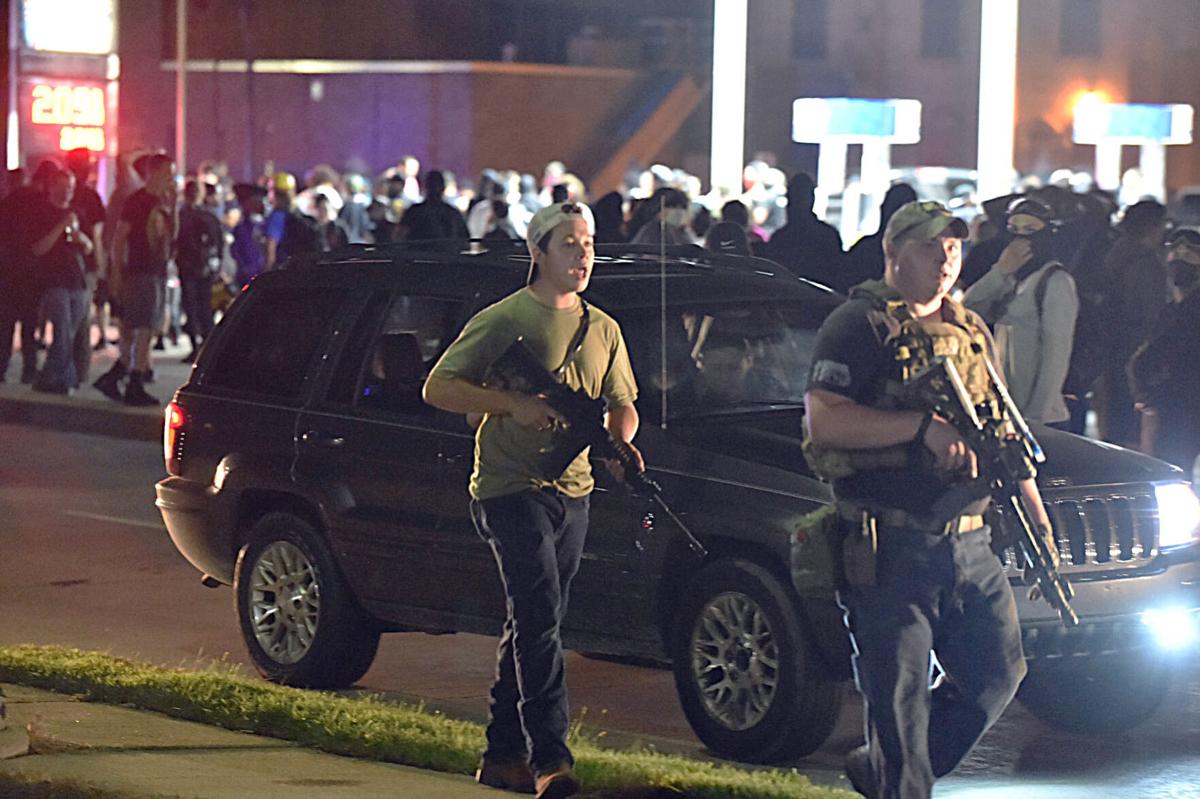 Kyle Rittenhouse walks along Sheridan Road  in Kenosha at about 11 p.m. on Aug. 25, 2020 with another armed civilian. Rittenhouse, a 17-year-old from Illinois, is accused of shooting three other people, killing two of them, later that night. 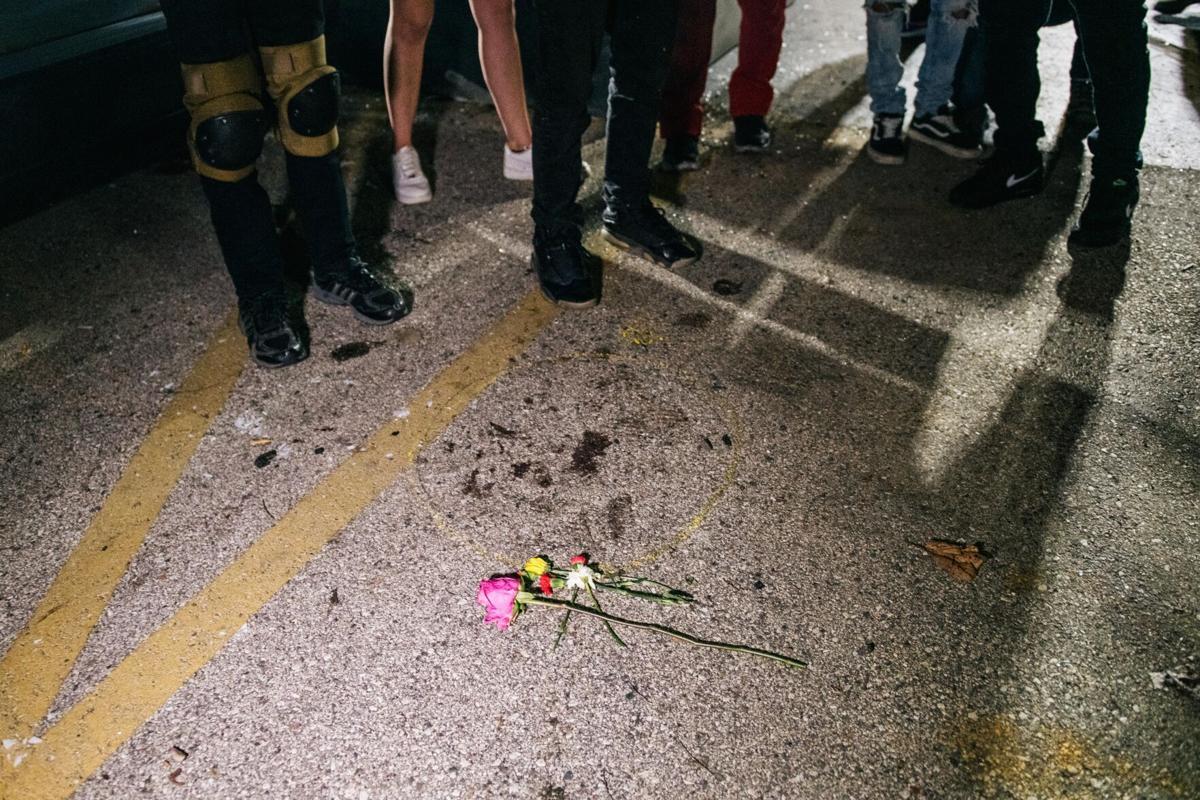 Two men were killed in Kenosha, Wisconsin, on Tuesday night during protests over the police shooting of Jacob Blake. Protesters Anthony Huber, 26, and Joseph Rosenbaum, 36, were fatally shot by 17-year-old Kyle Rittenhouse, a self-proclaimed police admirer armed with an AR-15. Rittenhouse, who claimed he was out protecting local businesses, was charged with six criminal counts including first-degree intentional homicide and first-degree reckless homicide.

The second in command of the Norfolk, Virginia Police Department’s internal affairs unit has been fired after he made what the city manager called “egregious” comments praising Kyle Rittenhouse, the white man accused of shooting and killing protestors last year.

Those comments violated departmental policies and “erode the trust between the Norfolk Police Department and those they are sworn to serve,” City Manager Chip Filer said in a statement Tuesday afternoon.

Filer and Police Chief Larry Boone did not say which specific policy Lt. William K. Kelly III violated. When asked, a police spokesman said he would check with the city attorney but did not respond further.

An anonymous donor in September gave $25 to the legal defense of Kyle Rittenhouse, but the donation came from Kelly’s official email address, according to data from the Christian crowdfunding website GiveSendGo that was hacked. The transparency group Distributed Denial of Secrets then shared the information with journalism organizations, including The Virginian-Pilot.

Kelly became an executive officer in Norfolk police’s internal affairs unit two months ago, according to his LinkedIn page. He began working for the department in 2002, city employment records show.

The city’s statement Tuesday said he “is afforded the right to appeal the (firing) in accordance with the City of Norfolk grievance procedure and applicable law.”

“We were hoping for a full, transparent investigation,” he said, noting Kelly is not a member of the union. “But after 72 hours, I do not believe that is what we got.

“It is hard to call this fair.”

Rittenhouse’s case has become a rallying cry for right-wing activists, and the donation from Kelly’s email address carried the comment: “God bless. Thank you for your courage. Keep your head up. You’ve done nothing wrong.”

It continued: “Every rank and file police officer supports you. Don’t be discouraged by actions of the political class of law enforcement leadership.”

After the story broke, Boone said Kelly had been reassigned. The chief also said he’d launched “an administrative investigation” into the allegations against Kelly.

“A police department cannot do its job when the public loses trust with those whose duty is to serve and protect them,” Boone said Tuesday in the statement announcing Kelly’s firing. “We do not want perceptions of any individual officer to undermine the relations between the Norfolk Police Department and the community.”

Kelly has not responded to a message sent to his work email on Friday. On Tuesday, The Pilot left a message at a landline number listed for Kelly. No one responded.

A veteran Norfolk officer told The Pilot the allegations against Kelly were “absolutely crazy” and threatened to further widen racial divisions within the department. The officer, whom The Pilot is not naming because department policy tightly restricts when police can talk to the media, called Kelly a nice, unassuming guy — a “golden boy.”

“I never would have figured,” he said.

The officer said Kelly’s assertion that “every rank and file officer supports you” is just flat out wrong. “Many of us here are pissed off because he doesn’t speak for us and those views are certainly not mine. We are waiting to see how this is handled by the administration.”

In a statement, Mayor Kenny Alexander on Friday called the allegations against Kelly “alarming and by all means not consistent with the values of our city.” Alexander said he looked forward to reviewing the police department’s report on the accusations.

Floyd’s death on Memorial Day sparked protests and riots around the country. It also forced Americans to reckon with the inequities and oppression the criminal justice system continues to wreak on Black people and other people of color.

Rittenhouse, now 18, is accused of murdering two people and seriously injuring a third at a Black Lives Matter protest in Kenosha, Wisconsin, in August. He’s pleaded not guilty and claimed he shot the three men in self defense.

The Guardian first reported Kelly’s donation to Rittenhouse and the GiveSendGo data breach. The leak revealed police officers and other public officials around the country donated money to fundraisers for alleged vigilantes, far-right activists and fellow officers accused of shooting Black people.

The beneficiaries of donations from public officials include Rittenhouse, who traveled with weapons from neighboring Illinois to, by his own account, offer armed protection to businesses during protests over the police shooting of Jacob Blake.

Rittenhouse became a cause célèbre across conservative media throughout late 2020 and was even supported by then-President Donald Trump. He held a fundraiser on GiveSendGo billed as a contribution to his legal defense. He raised $586,940 between Aug. 27 and Jan. 7, according to The Guardian’s article.

Conservative groups and supporters have sought to paint Rittenhouse, who was 17 at the time of the Aug. 25 shootings, as a staunch supporter of the Blue Lives Matter movement and a patriot.

Michael Louis Cadogan, 24, is charged with abuse of a corpse.

Family, students, administrators and others gathered at Fred T. Foard High School for a prayer service Thursday afternoon for two students and a teacher injured in a car crash in Newton on Wednesday.

Jun. 21—A fire tore through a massive Outer Banks home on Father's Day, leaving dozens displaced in the popular tourist destination, officials said. Facebook user Sheila Foster Davies said it was about 4 a.m. Sunday when she woke up to someone pounding at her door and telling her to evacuate. Video she posted online shows flames leaping from a nearby home in Kill Devil Hills, North Carolina. ...

Authorities said Lisa Tate, 51, of Apex, and her passenger, Victora Padilla, 17, of Holly Springs, were killed during the crash Tuesday afternoon on I-40.

A 16-year-old girl on a backpacking trip with her family was attacked in the middle of the night while sleeping in a hammock on the Tennessee side of the Great Smoky Mountains National Park.

Four family members have died and a fifth is missing in the accident, which is being called the worst recreational disaster in Rockingham County.

A woman was shot in the face in a road rage shooting in Lincoln County on Sunday morning, the county’s sheriff’s office said in a statement.

A student passenger is in critical condition after she and other occupants of a driver's education vehicle were injured in a six-car collision in Newton on Wednesday afternoon.

Four people, including an occupant of a driver’s education vehicle, were taken to hospitals following a multivehicle crash in Newton, N.C.

14-year-old among dead, 7-year-old one of two missing after tubes went over Dan River dam

Kyle Rittenhouse walks along Sheridan Road  in Kenosha at about 11 p.m. on Aug. 25, 2020 with another armed civilian. Rittenhouse, a 17-year-old from Illinois, is accused of shooting three other people, killing two of them, later that night.

Two men were killed in Kenosha, Wisconsin, on Tuesday night during protests over the police shooting of Jacob Blake. Protesters Anthony Huber, 26, and Joseph Rosenbaum, 36, were fatally shot by 17-year-old Kyle Rittenhouse, a self-proclaimed police admirer armed with an AR-15. Rittenhouse, who claimed he was out protecting local businesses, was charged with six criminal counts including first-degree intentional homicide and first-degree reckless homicide.