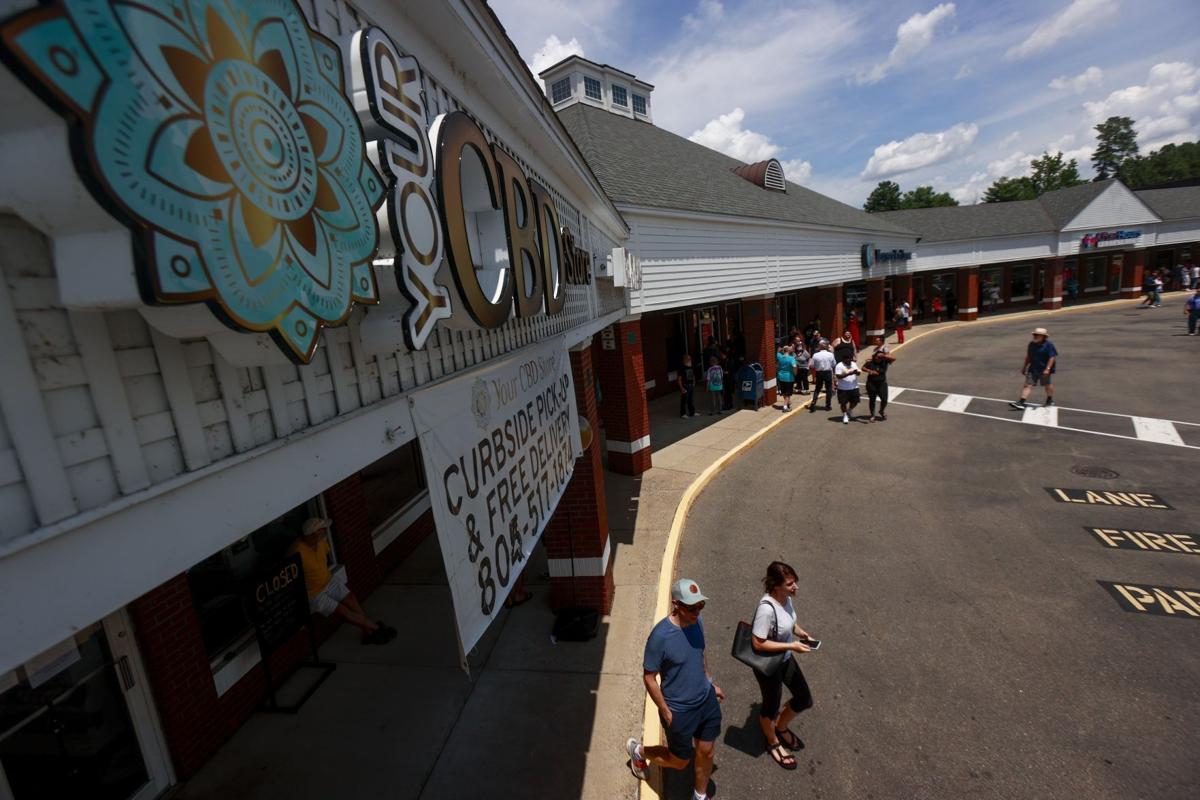 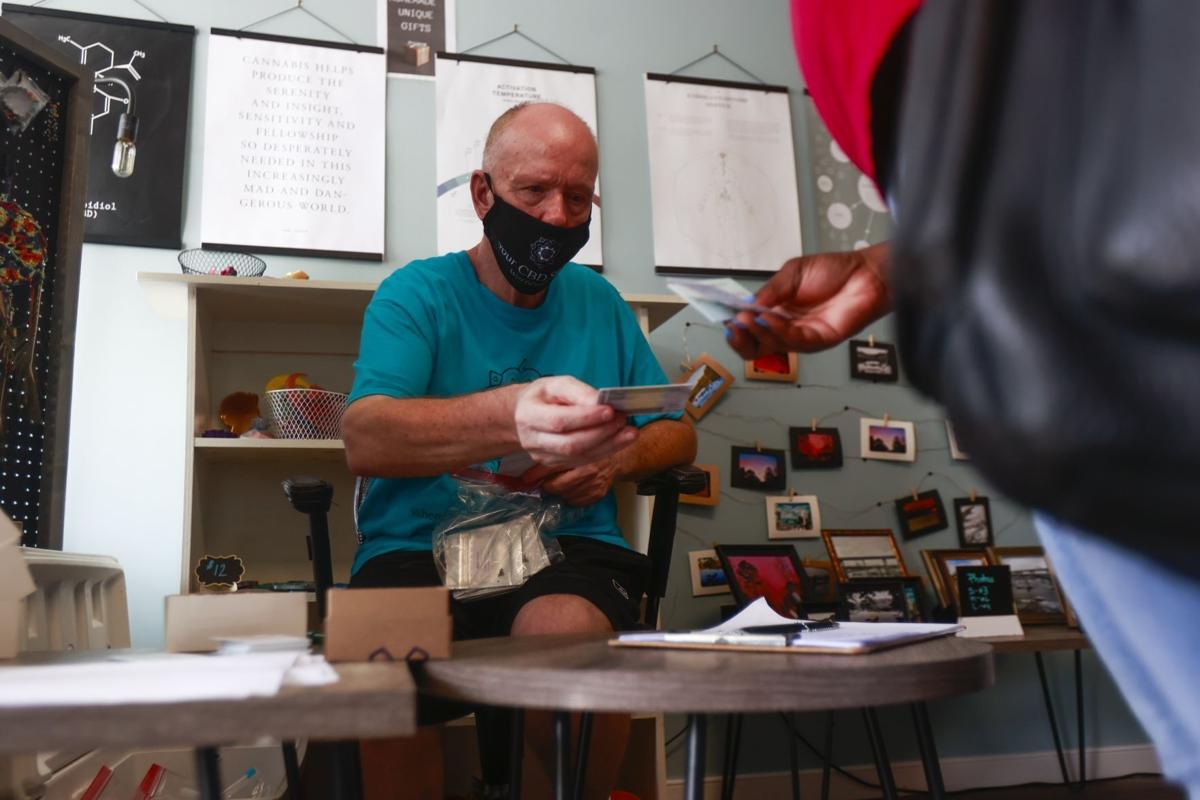 Carl Swope checks IDs as he distributes marijuana seeds on Thursday, July 1, 2021 at Your CBD Store in Henrico, Virginia. 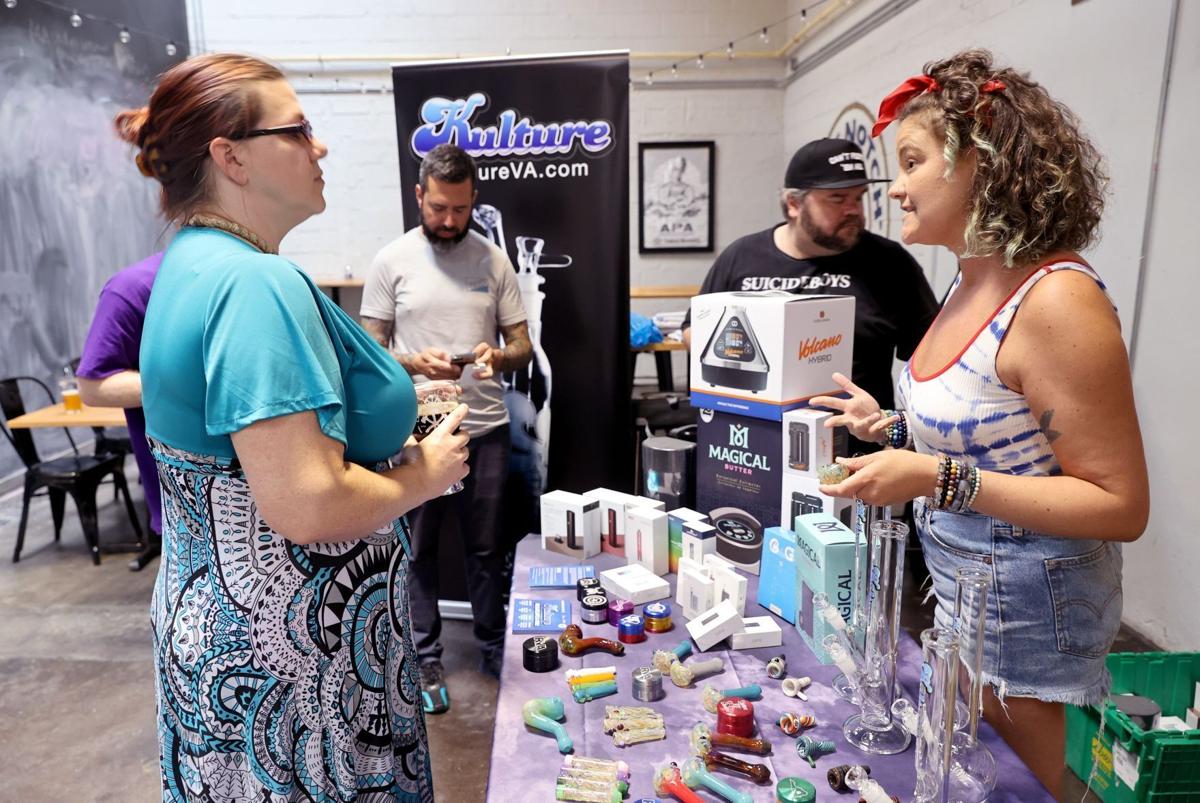 Sierra Williams (right), who works at the smoke and vape shop Kulture, talked to Alesha Lane of Chesterfield County at Three Notch’d Brewing Co. in Richmond, Virginia on Thursday. 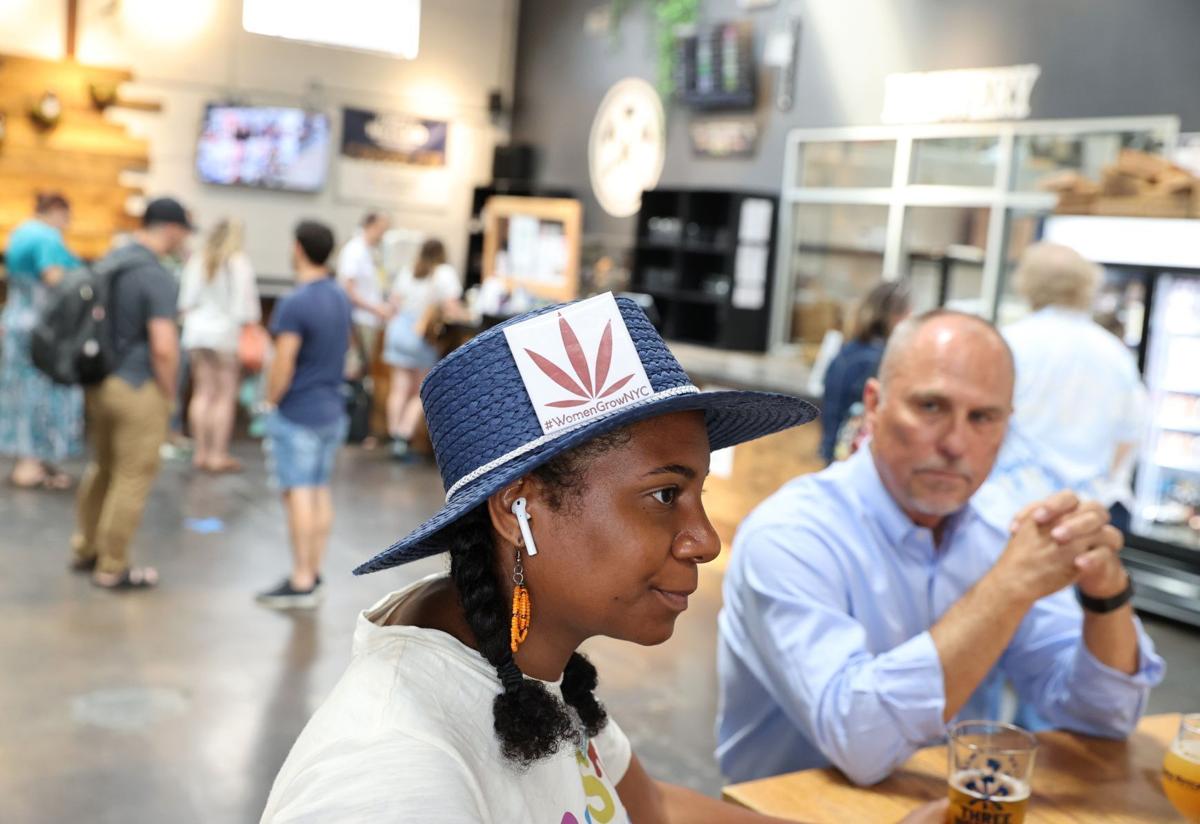 Hundreds of Virginians hoping to grow and harvest their own marijuana plants each took home a half-dozen seeds distributed in a Henrico County parking lot Thursday, the first day that recreational use of the drug was legal for adults 21 and older in the state.

Your CBD Store, a hemp retailer, and Virginia Marijuana Justice, an Arlington County-based advocacy group, gave out the seeds legally and free on Thursday to mark the legalization.

She expressed some worry about government regulation over marijuana seeds; knowledgeable consumers can be particular about the types of strains they consume.

Still, she said, “I think this could be good.”

Virginia Marijuana Justice expected to hand out more than 14,000 cannabis seeds Thursday at four locations across Virginia, marking the beginning of legalized recreational marijuana in the state.

Virginia on Thursday became the first state in the South to allow the use of marijuana recreationally among adults over the age of 21 — doing away with penalties for possession of less than an ounce and allowing people to grow their own at home.

It’s just the beginning of what will be a yearslong process. Legal sales in Virginia won’t kick off until at least 2024, leaving recreational users three avenues to procure marijuana: the illicit market or illegal imports, gifts from other adults and the harvest of their own plants.

Medical marijuana users will continue to have access to the state’s dispensaries.

Your CBD owner Jennifer Elliot described significant enthusiasm during the seed distribution event Thursday. The event was supposed to start at noon, but a line had already begun to form by 8:30 a.m.

Due to the size of the event, an official for the shopping center’s property management company began directing people away from the premises, telling them to wait in their vehicles for their turn to pick up seeds. Henrico County police were present to help with crowd control.

Elliot said the store was handing out six seeds, all legally donated, per person.

“I think that Virginia has stepped up and that we’re going in the right direction,” Elliot said. “Our goal here is to make sure people that need it have access.”

Elsewhere in Richmond, health officials on Thursday warned that because marijuana is newly legal in many parts of the country, little research exists on the effects of the drug on the body — unlike alcohol and tobacco.

Amy Popovich, the director of community engagement at the Richmond City Health District, said during a news conference that Virginians should be aware of common side effects if they consume the drug.

“Smoking marijuana can lead to a greater risk of bronchitis, cough and phlegm production. It can be carcinogenic, like cigarettes. Marijuana raises your heartbeat, and so smoking marijuana has been linked to increased risk of heart disease and stroke.”

Popovich warned of risks to the brain development of young people who consume marijuana. As with tobacco, inhaling secondhand smoke from marijuana can be harmful.

Still, Catherine Long, a spokeswoman for the Richmond and Henrico health districts, said the department also anticipated positive health benefits from legalization — mainly, that it could reduce the disparate enforcement of marijuana laws against people of color, particularly Black people.

The research arm of the Virginia legislature found that from 2010 to 2019, Black Virginians were nearly four times more likely than white Virginians to be arrested on a marijuana possession charge and convicted of the crime, even though the two populations used marijuana at similar rates.

“We also know that being incarcerated or having a family member incarcerated can be a very traumatic experience,” Long said, highlighting that trauma can lead to physical and mental health effects, like sleep deprivation and depression.

“Legalizing marijuana will not fix racism, however, or mitigate all health disparities. But, it can have the potential to reduce some trauma experienced by the Black and brown community, and that, as a result, helps our whole community.”

As the Richmond Times-Dispatch reported this past weekend, Virginia lawmakers have done little to redress people and communities harmed by the criminalization of marijuana — including those who remain incarcerated — as the state stands to make millions off the drug. Civil rights groups also worry that a hastily crafted law could still result in racially disparate enforcement and leave Virginians who don’t understand the subtle legal nuances to face criminal charges.

While possession of less than an ounce will be legal, Virginians could still face a civil fine for possessing up to a pound. People found with more than a pound will face a felony.

Sales and public consumption will continue to be illegal. Driving under the influence of marijuana is also a crime. In addition, Virginians can be charged with consuming marijuana while driving if police find marijuana in the passenger area of their vehicle and perceive any physical signs of use — excluding the smell of marijuana.

“A lot of people have been unrightfully imprisoned for it and I feel like it has a lot of benefits that can be discussed. Putting people in prison for it just feels way too harsh of a punishment,” said Mackenzie Haines, 20, of Richmond, interviewed at Brown’s Island on Thursday.

Pre-legalization consumers and legalization advocates say a new day has dawned in Virginia. Thursday’s move into legalization opens up the possibility for a booming new industry in the state, and the end of social stigma around a drug many Virginia adults have come to enjoy or depend on.

Austen Maddy, 23, of Chesterfield County said consuming marijuana has had positive health effects for him. “For starters it helps me out with my ADHD,” he said. He added that since news of the legislature’s decision began spreading, he and people he knows have been less afraid to consume marijuana.

“I’m going to enjoy every bit of it.”

NC 4-year-old dies after shooting himself in the head. He found the gun underneath a couch cushion, High Point police say.

The homeowner and the boy's mother are now facing charges in his death, police say.

A video posted Saturday to TikTok shows a deputy in Burke County holding a man with the crook of his elbow pressed against the man’s neck. The man appears to go limp and the deputy lowers him to the ground before the recording ends.

South Carolina Sen. Lindsey Graham promised Wednesday that he would “go to war for the principles Chick-fil-A stands for.”

Triple amputee triathlete: It's fine to be inspired by me, but that doesn't last long. Be your own inspiration.

Two days of triathlons give a triple amputee a chance to spread his message of health and wellness.

Jul. 26—In 2018, Lexington Tourism Authority Director Robin Bivens was in Dublin, Ireland, on a personal vacation when she learned just how far the reputation of her small hometown and its unique barbecue had spread. Sitting in the lobby of her hotel, she struck up a conversation with their tour guide. He asked Bivens what she did for a living and where she lived. When "Lexington, N.C.," ...

Massive wildfires out West bring haze to NC, others on East Coast

Are you seeing hazy skies in your area today?

Warren Lee Raymond Sr., 64, pleaded guilty on Monday to two counts of second-degree murder in the deaths of his wife and son.

Carl Swope checks IDs as he distributes marijuana seeds on Thursday, July 1, 2021 at Your CBD Store in Henrico, Virginia.

Sierra Williams (right), who works at the smoke and vape shop Kulture, talked to Alesha Lane of Chesterfield County at Three Notch’d Brewing Co. in Richmond, Virginia on Thursday.