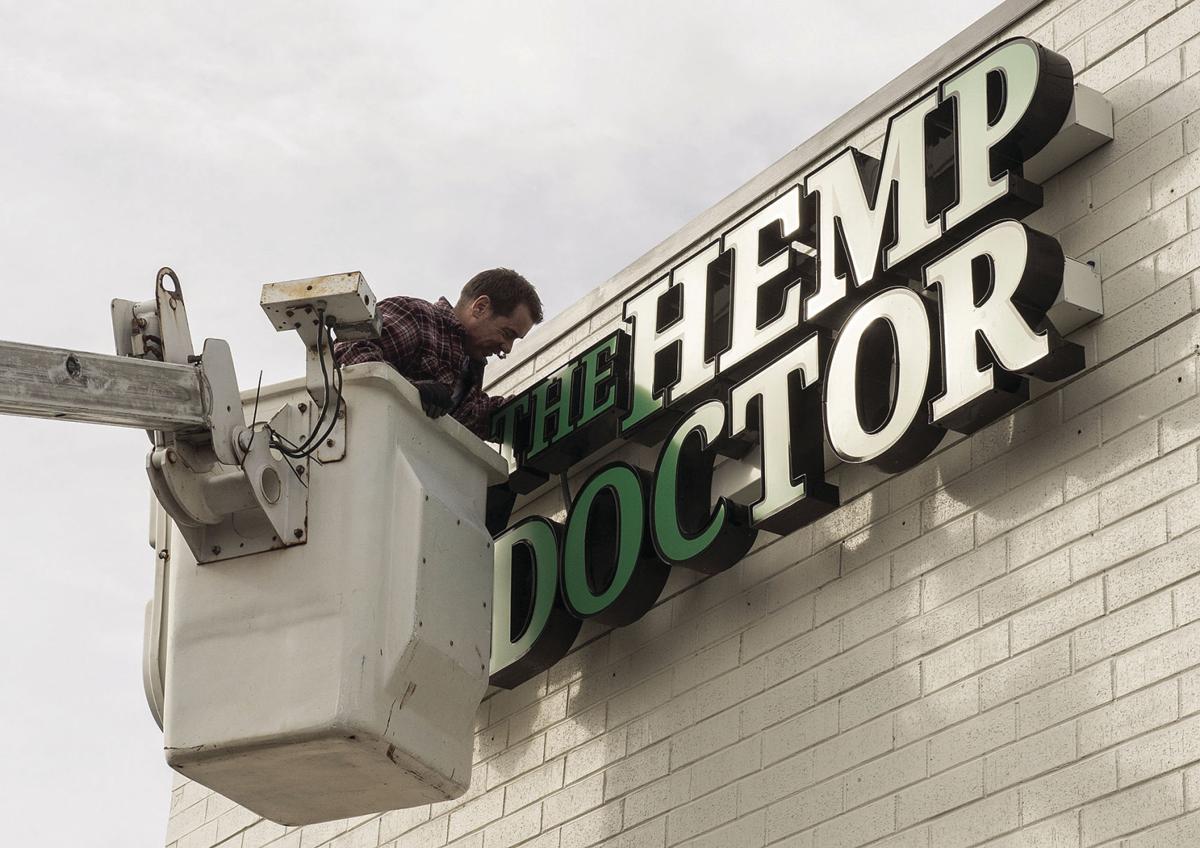 Ken Bonham, of LKN Signs, works on the sign for The Hemp Doctor on Thursday in Mooresville. 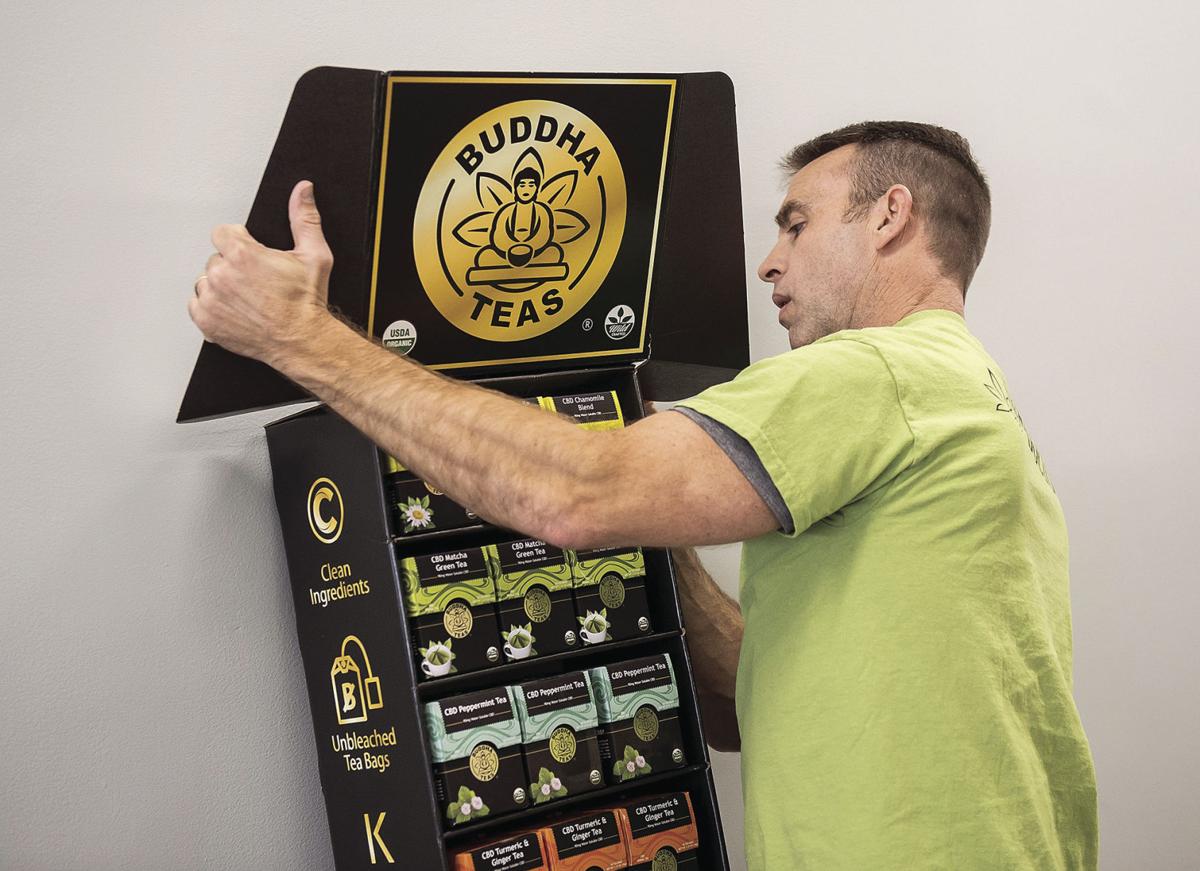 Robert Shade sets up a Buddha Teas product display at The Hemp Doctor on Thursday in Mooresville. 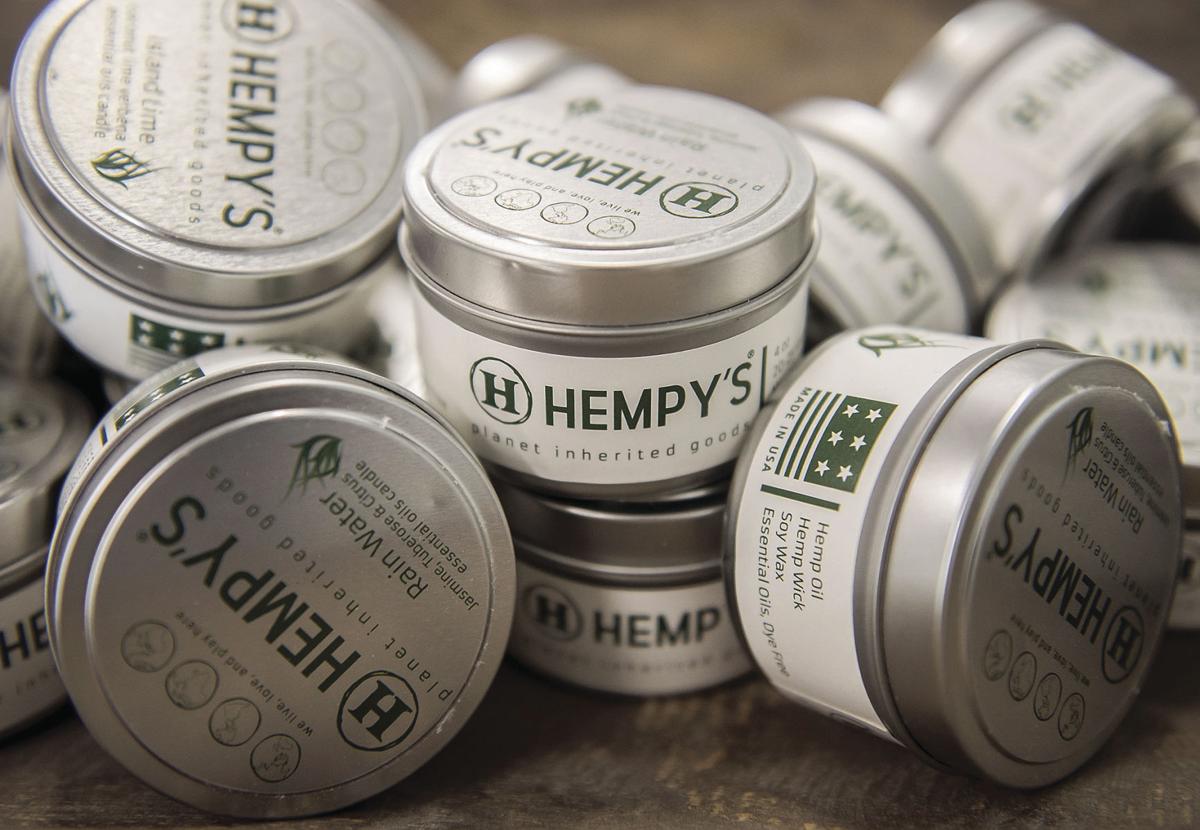 Hemp candles sit on display at The Hemp Doctor on Thursday in Mooresville. 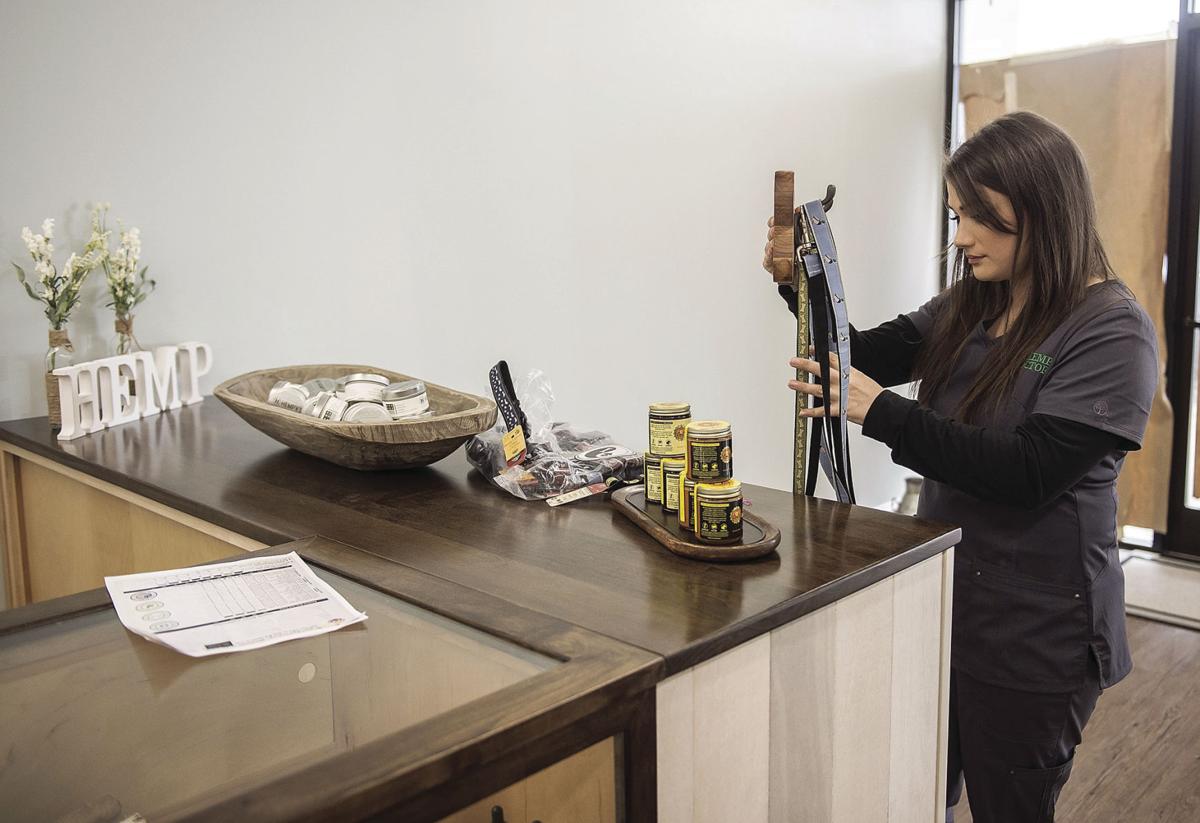 Courtney Shade sets a display for hemp dog leashes at The Hemp Doctor on Thursday in Mooresville. 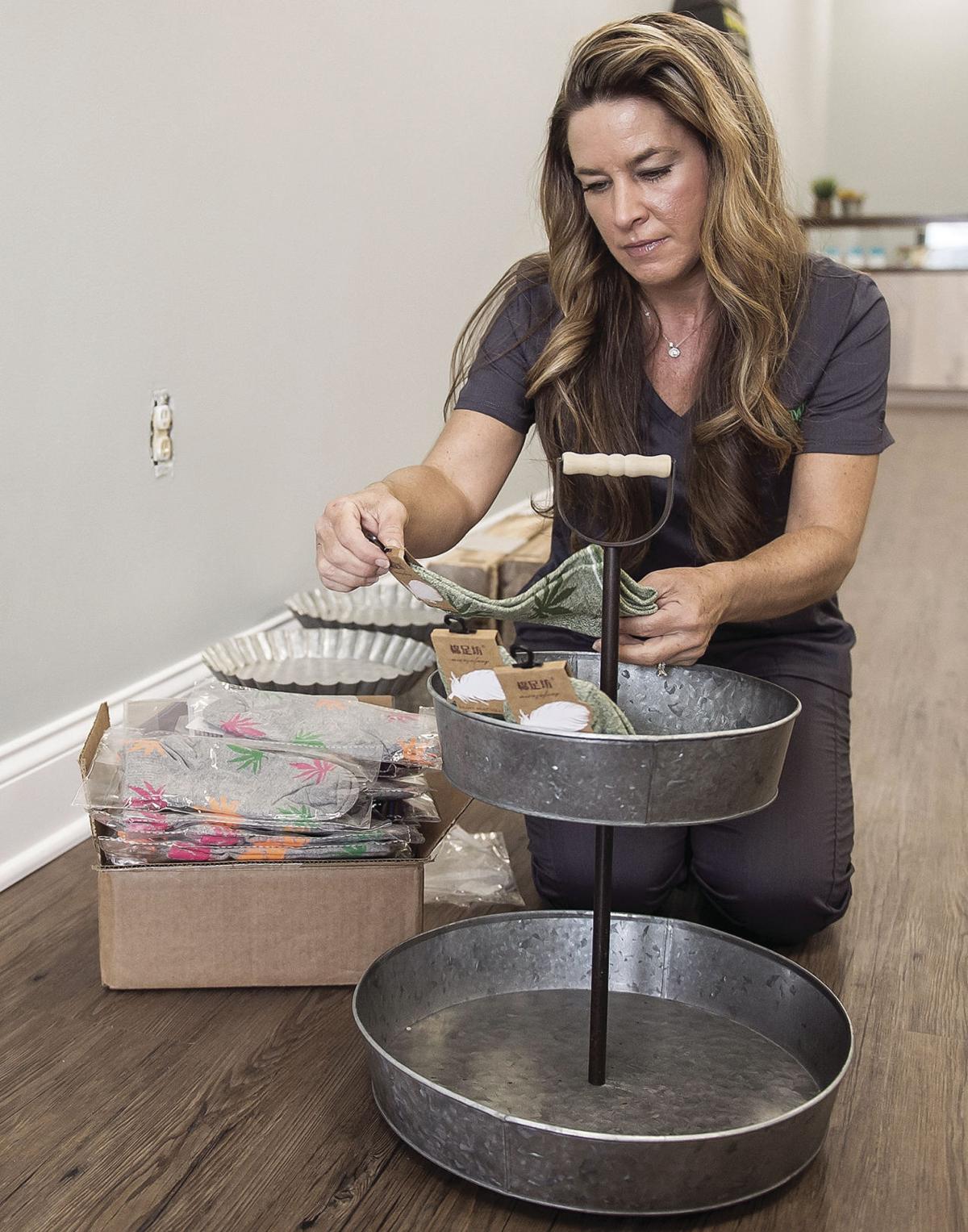 Cindy Shade sets up a sock display at The Hemp Doctor on Thursday in Mooresville.

The couple will be opening The Hemp Doctor, one of the first stores in Iredell County solely dedicated to the sale and distribution of hemp products and cannabidiol, a substance derived from hemp and commonly known as CBD.

Hemp often is mistaken for its identical cousin, marijuana, but it does not carry the same type of “magic” that recreational pot users seek.

Hemp contains less of the high-producing THC ingredient than marijuana. But hemp remains a sort of wonder product for its use in protein supplements, oils, clothing and even paint.

Given its close association to marijuana, hemp has been a hotly contested substance over the years. It’s floated around various spots on the Drug Enforcement Agency’s list of controlled substances, although the recently passed farm bill in congress would legalize production.

And the legality of hemp has been on the Shades’ minds.

“There’s nights were we lose a little bit of sleep over it because it’s not welcomed by everyone,” Robert said. “It’s still kind of taboo in some instances, from the sense of some people are ignorant about it.”

Not just a business

The couple’s personal experience with hemp triggered their interest in opening a store.

“About 10 years ago our oldest daughter was in a really bad wreck and she had multiple, multiple surgeries and a very long road to recovery,” Cindy said.

Courtney Shade was in the first few weeks of her senior year of high school at the time. She broke all the ribs on her left side and also broke her back. She also had her spleen removed due to complications from the accident.

After many surgeries and a slew of medications prescribed to Courtney, Cindy said she noticed behaviors like shaking and increased anxiety from her daughter.

“She’s always had it because she’s had horrific scars all over her body,” Cindy said. “That in itself, I’m sure is very stressful, but after this particular surgery (bowel reconstruction) she couldn’t get balanced out, she couldn’t keep from shaking.”

Relief came to Courtney, now 27, about a year ago while she was managing a MadVapes store in Mooresville. She was on a leave of absence when a coworker suggested she try taking CBD to help with some of the side effects of her medication.

“It was about 30 minutes later (that) she wasn’t shaking in her hand, her twitching, her stomach kind of calmed down a little bit,” Cindy said. “She wasn’t as nervous (and) didn’t feel as depressed.”

Courtney started taking CBD products regularly. Once Robert noticed how Courtney’s conditioned had improved, he decided to recommend it to his nephew, who had been diagnosed with Tourette syndrome.

“No more outbursts, his ticks have gone from several hundred a day down to less than 10 a day,” Robert said. “He also had insomnia, and the kid’s now sleeping 8 to 10 hours a night now.”

Even though Robert has seen some tremendous success with CBD and hemp products in his own family, he understands that it’s not for everyone. In addition to owning The Hemp Doctor, he also is a regional manager for C.R. Bard, a medical technology company.

He cites that patients already on blood-pressure medication may want to avoid hemp and CBD products because the combination could cause their heart rate to slow to an unsafe level.

“Not that I would say not to take it, but certainly to make sure that you consult with your healthcare provider,” Robert said. “Obviously, we can’t say that it’s going to cure or prevent any disease, but there’s a litany of lists that shows that it does help with many things.”

The Shades said that they hope The Hemp Doctor will help demystify cannabis for many people.

“It’s also very exciting that we’re going into the same thing that some people view as taboo/voodoo,” Robert said. “Really, we want to be transparent with the community about the business that we do have. We are no different than any other business owners as it relates to our product and the belief that we have, and the fact that we stand behind what we sell.”

And with about 70 percent of their hemp grown and harvested in North Carolina, the Shades have managed to stay fairly local in their new business.

The Shades feel welcome in Mooresville, they said.

“I honestly haven’t heard one negative comment from anybody in the community that they thought it was a bad idea, or not a good idea,” she said. “I think there’s more people out there than not that need it, that are curious about it. And I think that the community’s ready to veer away from pharmaceutical.”

Most people using CBD are not trendy youngsters. A joint July 2018 study from the Center for Medical Cannabis Education and San Diego State University found that about 60 percent of subjects who currently used or had used CBD were 45 and older. The same study found that people consumed CBD to deal with issues like chronic pain, anxiety and depression.

The Shades plan to open The Hemp Doctor on Dec. 21. They will offer a variety of products including hemp and CBD oils, edibles, hemp jewelry and hemp-based pet accessories.

The store is at 510 River Highway in the Port Village shopping center.

The woman struck and killed on East Plaza Drive Friday night has been identified as Bethis Armida Villatoro Velasquez of Mooresville.

A 19-year-old Mooresville man died Saturday night in a crash on Linwood Road.

No one is in custody and officials aren't sure why gunfire broke out early today at a crowded concert venue in Greenville, S.C., where the governor recently said COVID-19 restrictions on large gatherings remain in force.

Virus update: View 9 charts that track COVID-19 spread in our state and nation

On this July Fourth, health officials worry more U.S. residents will abandon measures to slow the spread of COVID-19. See how our state compares to others in maps and charts that show virus spread, testing and more.

Plan for Carolina BalloonFest altered for 2020, to go on without public attendance

The COVID-19 situation is altering the plans for the Carolina BalloonFest.

The Mooresville Police Department is investigating the death of a pedestrian who was struck by a vehicle around 9:30 p.m. Friday on East Plaza Drive.

Ken Bonham, of LKN Signs, works on the sign for The Hemp Doctor on Thursday in Mooresville.

Robert Shade sets up a Buddha Teas product display at The Hemp Doctor on Thursday in Mooresville.

Hemp candles sit on display at The Hemp Doctor on Thursday in Mooresville.

Courtney Shade sets a display for hemp dog leashes at The Hemp Doctor on Thursday in Mooresville.

Cindy Shade sets up a sock display at The Hemp Doctor on Thursday in Mooresville.