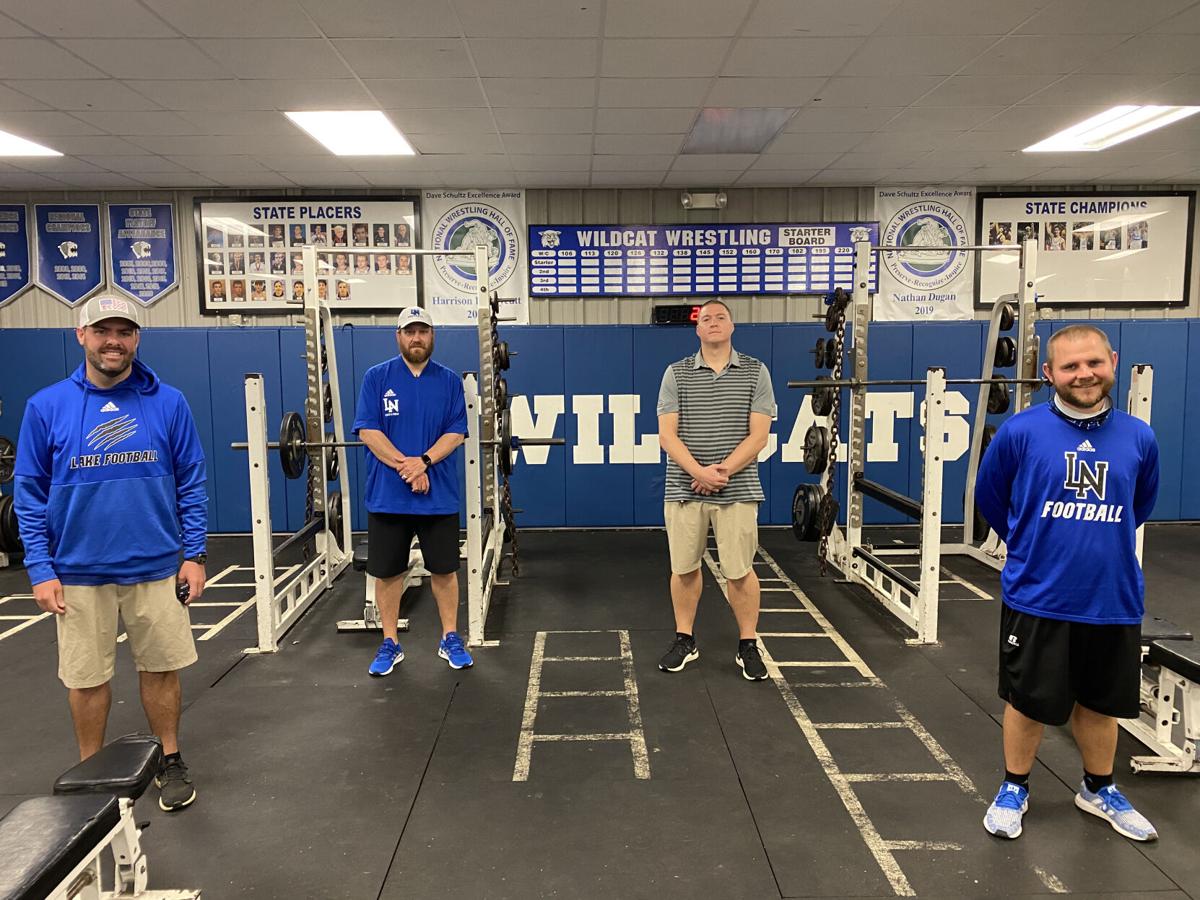 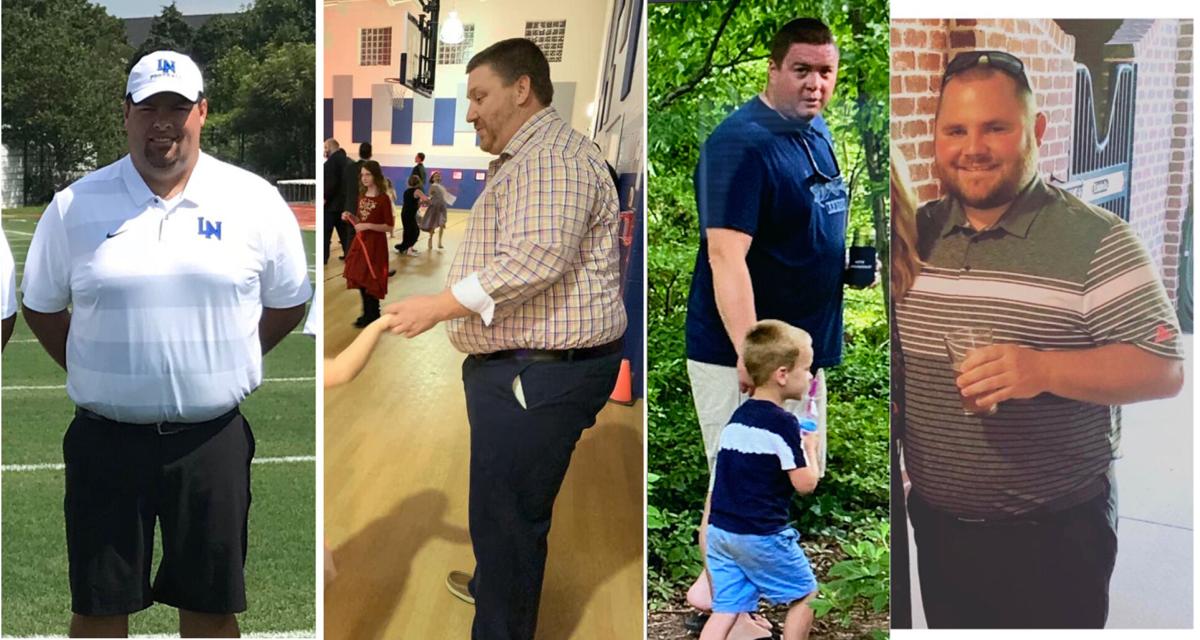 When Jay Keener stepped on the scale following Fourth of July weekend last year, he saw a number that didn’t sit well with him.

Like many before him following the COVID-19 quarantine period, Keener was realizing what being forced to stay home for a few months could do to a person’s health and physique. However, that scale acted as a wake-up call.

“It was the heaviest I ever weighed,” Keener said. “I just started chipping away from there.”

He started slow, running around the track at Lake Norman High School, where he is the athletic director, for a mile a day. Sean Fitzgerald, a football coach for the Wildcats, joined in a week later. By Aug. 14, the group expanded from two to four when two more football coaches, David Johnson and head coach Jonathan Oliphant started participating as well.

And thus, the “Thick Boys Running Club” was born.

Since their first official weigh-in on Aug. 24 of last year, the four of them have shed a combined total of more than 350 pounds. Johnson has contributed the most to that total, losing close to 120 pounds in the last seven-plus months after starting last summer weighing 365 pounds.

Next is Keener, who has shed just over 80 pounds since beginning in August with a goal to get that number to 100. Oliphant is also right around the 80 pounds lost mark, dropping from 278 to 198 in the last seven months. Fitzgerald, who joined the club at 284 pounds has slimmed down to 212 lbs.

“We’re all pretty much realists,” Keener said. “We told ourselves that you can’t bite off more than you can chew.”

“We started out on the track running the straights and walking the curves, then we added some stadium stairs,” Oliphant said. “Then we started leaving the track ... one mile turned into a mile-and-a-half turned into two and now we’re running a 5K (3.12 miles) pretty regularly.”

The next step for the group was to adjust their diet. They began cutting carbs out wherever they could and began replacing it with proteins.

“We haven’t been starving ourselves,” Oliphant said. “I’ve been cooking some of the best food that I’ve ever eaten — and a lot of them are Keto recipes — but, damn, they’re good.”

As the school year started, the members of the club were given a chance to continue their workout plan thanks to the asynchronous school schedule that I-SS elected to use earlier in the school year, and then when the holiday season approached, they decided to use their running club as the basis of a fundraiser.

The first annual “Thick Boys Running Club 5K” was able to pull in more than $2,400 in donations for local charities.

“We’ve talked about doing another one next year,” Keener said.

Losing that kind of weight is sure to draw a reaction. All four mentioned that they had run into people from the past that didn’t recognize them right away, partially due to mask-wearing and the weight loss combined.

“My parents love (the weight loss), my wife loves it,” Oliphant said. “It’s actually motivated her to get healthier.”

“Honestly, there’s been a little bit of jealousy,” Keener said with a laugh. “My wife wants to be able to do the same thing, but has different time constraints and resources.”

The weight loss, and the effort that the coaches have put in, has also had an effect on the players on the Wildcat football team.

“The guys are always asking ‘How far did y’all run today?’,” Oliphant said. “I think it helps that they know that we’re putting in the work, too. It’s even motivated some of them to get out and lose a few pounds.”

Nearly eight months into their weight-loss plan, the members of the Thick Boy Running Club show no signs of slowing down. On average they each run 12-15 miles per week and each has their own plans for how much further they want to take it.

Both Keener and Oliphant want to join Johnson in the ‘triple-digit lost’ club and neither has very much further to go, just needing to shed around 20 more pounds each.

Fitzgerald and Johnson are just looking to keep the weight off now.

“Every fat guy looks at themselves in the mirror at some point and says, ‘I’ve got to make some changes’,” Keener said. “But personally, I’m really proud that I’ve not only been able to make the changes, but I’ve also been able to sustain them.

“This is a pretty big accomplishment for all of us.”

NYC to pay unvaccinated $100 to get jab

NYC to pay unvaccinated $100 to get jab

The Mooresville Graded School District Board of Education will be holding an emergency meeting today at 5 p.m. in the MGSD Performing Arts Cen…

The following is a list of those booked at the Iredell County Detention Center on felony and driving while impaired charges from July 15-21. Listed information, including addresses, has been gathered from reports publicly available at local law enforcement agencies. All individuals listed are innocent until found guilty in a court of law.

On July 10, Katy Clatterbaugh of Mooresville was crowned Mrs. Cosmos International 2021 at The Omni Orlando Resort at Championsgate. As the ne…

Lake Norman is magical setting of improbable, dubious and outrageous

It is usually in Spring on that last early cool morning, during the off-peak hours of the day when most of the boaters and fisherman are not y…

The following deeds were filed in the Iredell County Register of Deeds office from July 6-12. For more information regarding specific plots of…

Teacher charged with sexual exploitation of a minor

A Mooresville teacher has been charged with soliciting photos of a 15-year-old girl through SnapChat.

A fatal fire is under investigation on Loram Drive, near Troutman Tuesday night.