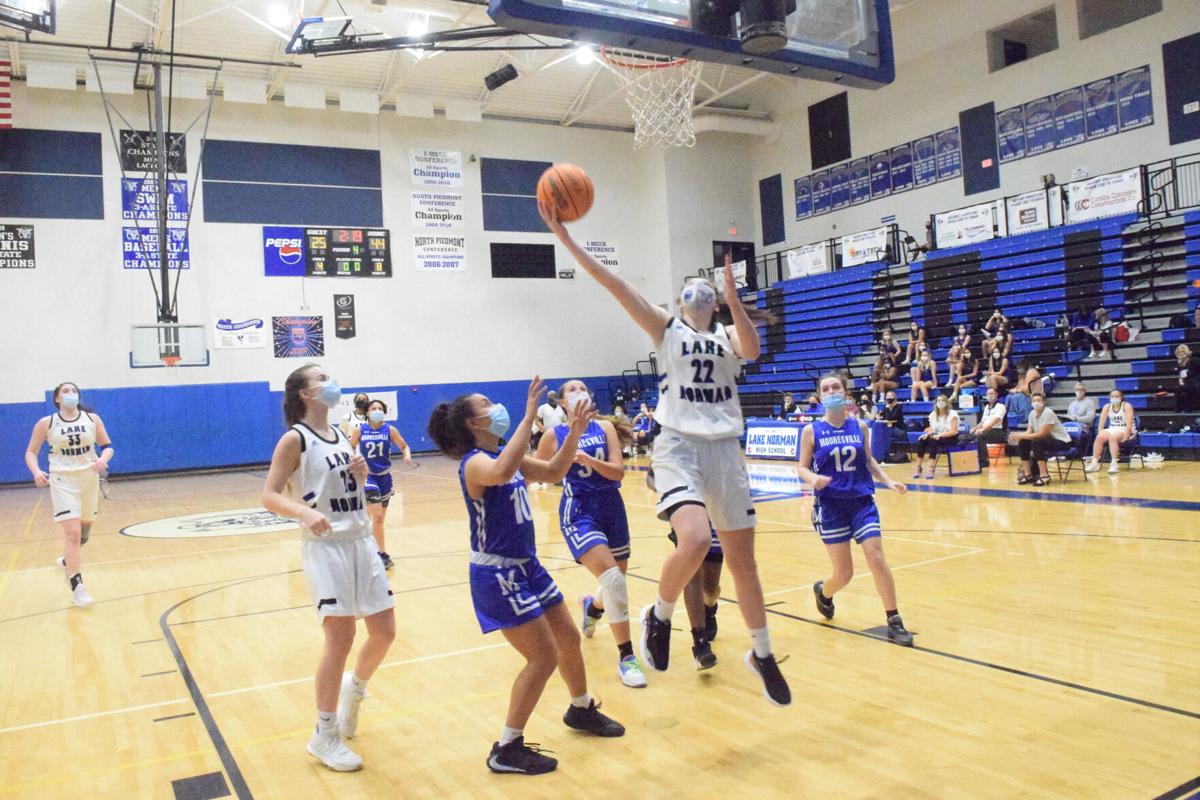 Making tracks, Lake Norman's Leigh Marks drives her way to a one-handed delivery to the basket against Mooresville defenders. 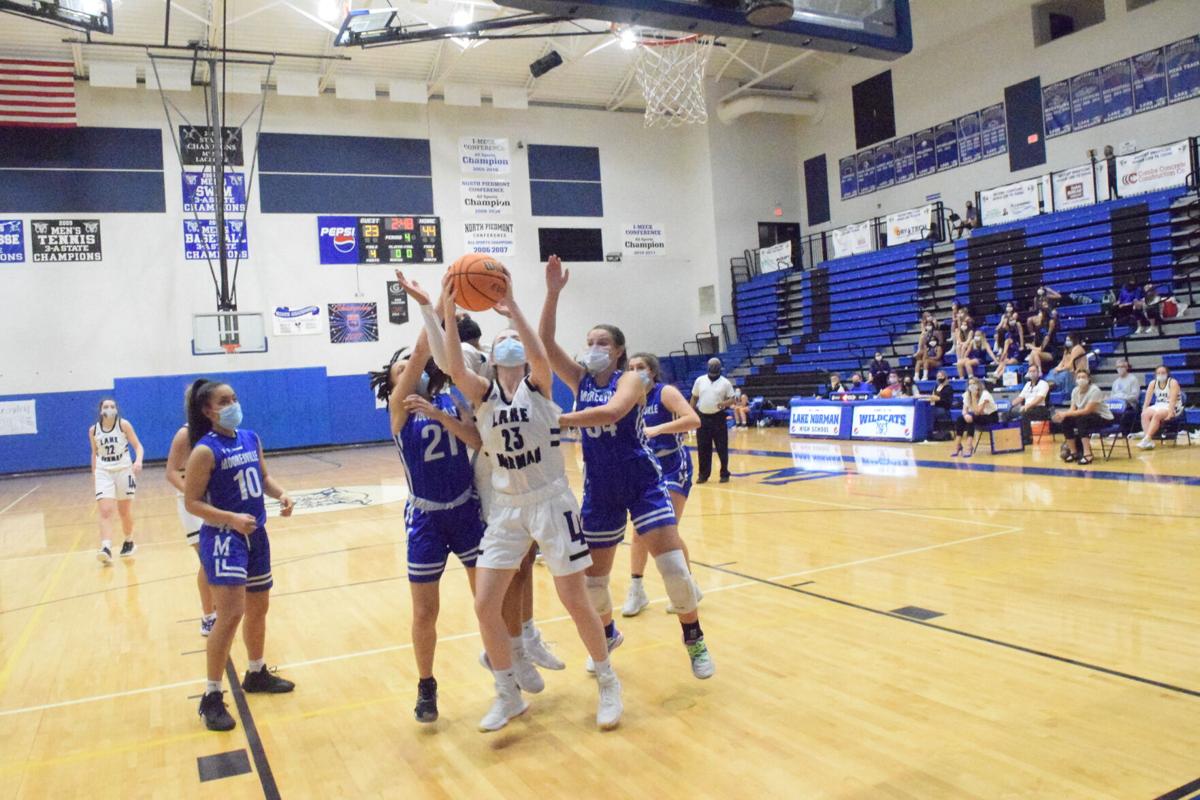 Doing so in the final showdown in large part courtesy of a clamping-down defensive display, the Wildcats limited the Blue Devils to mere single-digit outputs in all but one of the four quarters – barely allowing that total in the fourth -- and parlayed the provided ample amount of evidence into the collecting of a favorable, 53-25 verdict to also sew up the sweeping of the season’s home-and-home series set.

With the win also used to mark both teams’ return to action in the crucial I-Meck Conference setting for the first time since they each squared off more than a month earlier due to delays put into place related to COVID-19 concerns across the conference, Lake Norman did more than just support its status as ruling judge and jury over Mooresville this season.

The outcome enabled the Wiidcats to also remain unbeaten both for the season overall as well as in the crucial in-circuit ranks to also back premier billing both times.

Improving to the 6-0 mark overall that includes a 3-0 standard in league play allowed the Wildcats to head back into play residing as the No. 16th-ranked entry in the most recently-released N.C. MaxPreps.com 4A class girls poll while remaining as one of just three teams yet to suffer a setback in I-Meck play.

The news wasn’t nearly as receptive upon reaching the Mooresville sidelines. The defeat dropped to the nearest neighbors prevented the Blue Devils from registering their first welcome league victory of the season to drop them to the 0-5 level as part of a 1-6 overall effort.

For all practical purposes, Lake Norman made almost as quick work of pointing the season’s second meeting with Mooresville in its direction as possible. The home team paraded out to an 18-1 advantage through the completion of opening-period play alone to build a double-digit difference that stayed in place the rest of the way.

In captaining the charge, Wildcats junior backcourt presence Madison Saunders paced a pair of teammates in the double-figure department while netting overall game-high accolades in the process courtesy of her 15 points. Junior primary post player Aly Wadkovsky piled up the bulk of her damage near the basket to finish with a 10-point total. Just missing the mark, Kirsten Lewis-Williams finished with nine points to top a list that included as many as five additional players with points of some sort.

For Mooresville, it gathered in its only twin-figure scoring total from junior backcourt player Griselda Callejas courtesy of her 10 points that garnered her a two-way share of the game’s second-best individual output. The Devils' Seriah Davis was next in line with a seven-point total.

Lake Norman made the most of the early edge to mount a 30-10 tripling in place by the halftime break. They then tacked on the bulk of the remaining cushion over the course of fourth period play to reach the final 28-point winning margin.

Both teams headed back into play on track to also complete the non-conference segment of respective scheduled play.

Lake Norman faced off against Kannapolis A.L. Brown before embarking on the remainder of I-Meck action only when visiting Vance High on Tuesday.

As for Mooresville, it squared off opposite visiting Charlotte Garinger before resuming I-Meck play when hosting Hopewell High on Tuesday.

One on one, all by himself.

Road to recovery recalled through eyes of Mooresville author

Take it from one who has been there and back.

Catawba College’s softball team is presently in the still somewhat early stages of a season like only one other before it.

As it turned out, Saturday wasn’t such a bad day to engage in a regularly-scheduled match after all for Mooresville High School’s girls lacros…

A blessing in disguise.

Making tracks, Lake Norman's Leigh Marks drives her way to a one-handed delivery to the basket against Mooresville defenders.