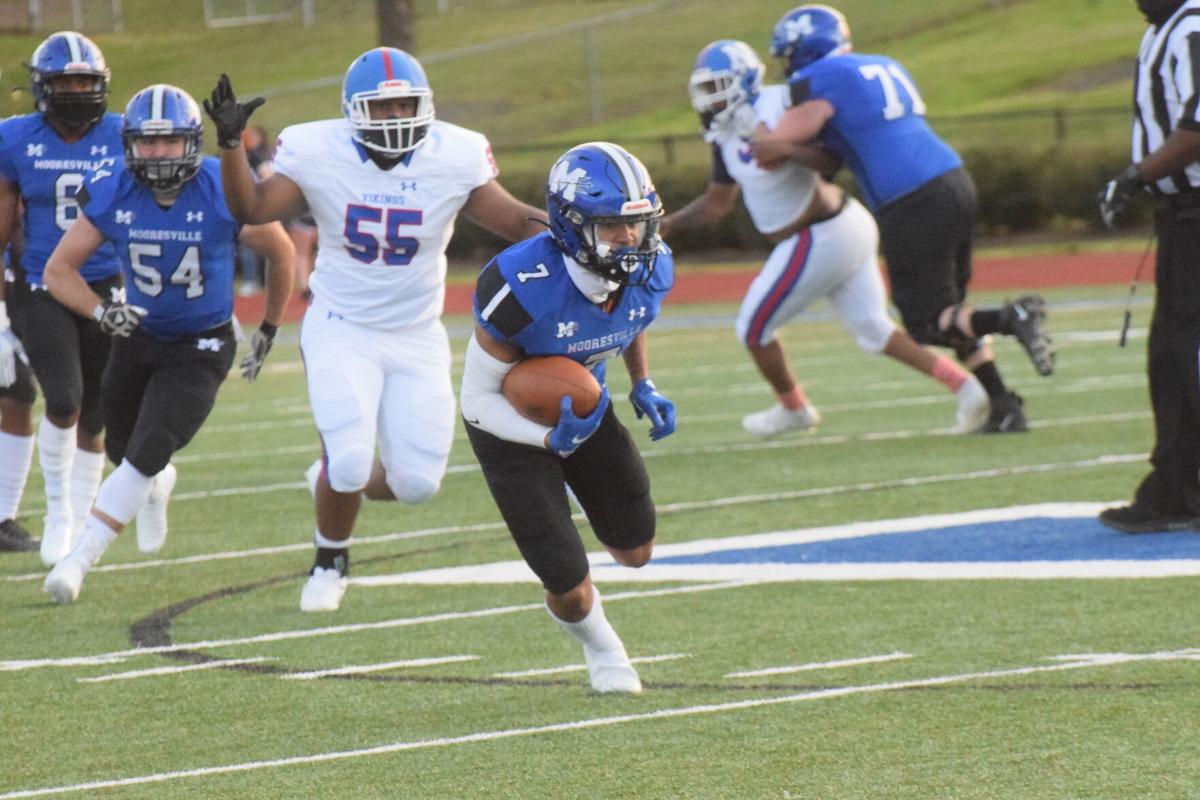 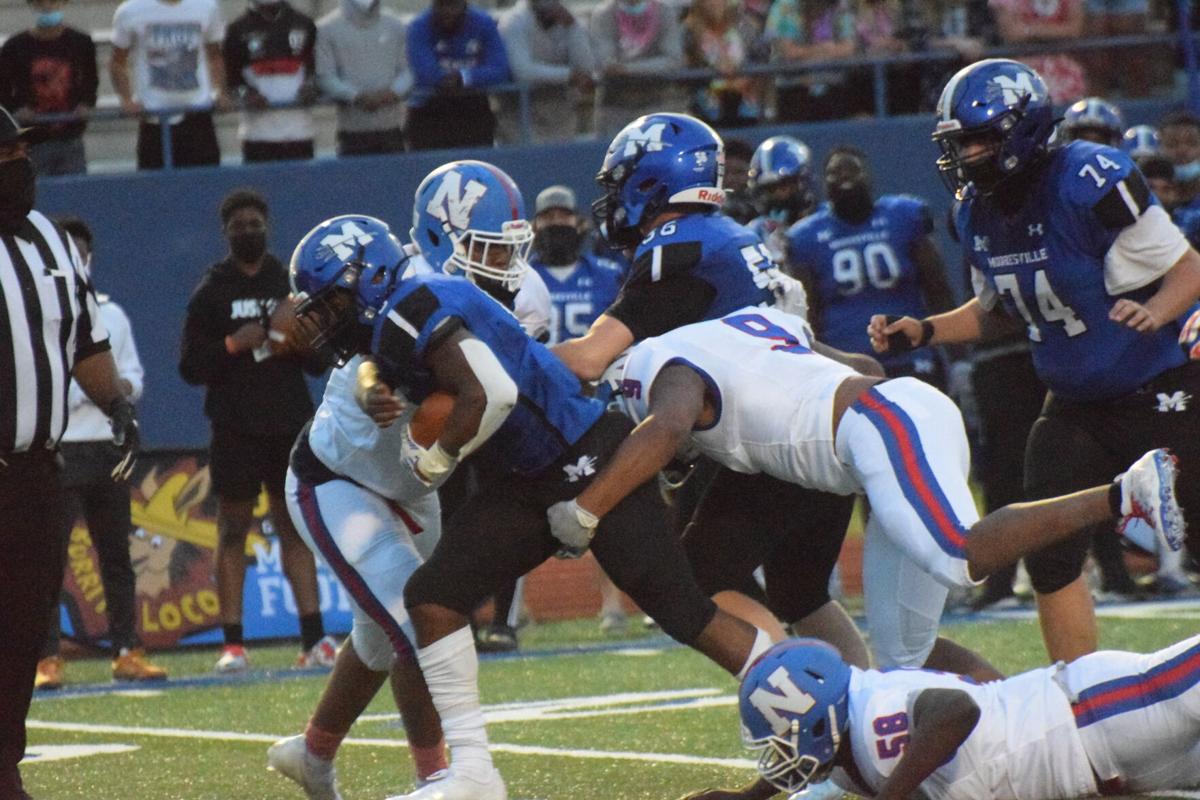 Hauling the heaviest load, Mooresville’s Glenwood Robinson plows his way through defenders during a carry against North Mecklenburg in the Blue Devils’ home win on Monday night.

An un-traditional tradition unlike any other.

Mooresville’s football team chalked up a second consecutive convincing triumph over a fellow I-Meck Conference member in a second straight contest taking place on a play date not normally associated with high school play. The victory was courtesy of a first half-fueled, thorough 32-9 toppling of North Mecklenburg.

Coming just after the Blue Devils collected their first favorable verdict of the season on a just-as-rare Thursday night appearance late last week, they improved to the 2-4 mark for the season overall. They also embarked on their first multiple-game winning streak of the season to take them into later this week’s regular season finale.

That the game was able to take place at all was in itself somewhat of a surprise. Initially, the same two teams were on track to kick off the season’s schedule back in late February. However, reports of COVID-19 tracing on the part of the North Mecklenburg program forced that originally-scheduled affair to be canceled. At the time, it was thought that the game could not be made up due to time-related restrictions caused by schedule limitations in place due to the virus.

Conversations between the two programs and the assurance that the minimum required three days distance between games as established by the N.C. High School Athletic Association could be followed meant the game could be rescheduled. Both teams had engaged in their most recent contests the previous Thursday night.

Once it did so and practically from the start, matters took a turn decisively in favor of the Blue Devils.

Less than two full minutes in play, the Devils’ defensive unit was the first one to account for a score. It came courtesy of a forced two-point safety scored on the North Meck Vikings’ game-opening possession serving to also stake the Devils to a lead they would never lose.

It was one on which the Devils continued to pad.

Late in the opening period of play, Mooresville senior running back Glenwood Robinson – fresh off his most productive personal performance of the season – stayed on track courtesy of a mere one-yard touchdown tote capping the Blue Devils’ opening drive of the night.

An even busier second stanza the Blue Devils built what wound up being its largest lead of the game overall.

Sophomore quarterback Jamere Cherry bullied his way into the end zone on a four-yard keeper TD carry in the opening minute of the period, after which Cherry then connected with senior all-purpose player Ashton Edstrom on a points-producing pass play covering 34 yards. Then, with less than 30 seconds left in the half, back Jebari Lackey rammed his way into the end zone from two yards away to also tally a touchdown. Placekicker Jacob Goodin complemented each of the four first-half scoring blows with successful point-after kicks that served to provide the Devils with the healthy, 30-0 halftime lead.

At that point and dating back to the previous contest covering a total of six quarters of play, Mooresville had outscored each of past two league opponents by a combined 76-0 margin.

For the majority of the second half, the Blue Devils appeared more than secure in protecting its edge. After surrendering a safety of its own to account for the only points scored in the third period, the Devils ended their run of consecutive-quarter defensive shutouts in the fourth by coughing up a Vikings score.

To complete the scoring, the Mooresville defensive unit again came up with the final points late in the final frame with another safety to account for the third two-pointer of the game overall.

To spice the showing, Devils QB Cherry finished his night with 114 yards passing and one TD apiece coming on the ground and through the air. Most-sought-after target Davyn Reid hauled in four of the receptions for 74 yards. On the ground, Robinson topped the charts with his 46 yards and a score.

Mooresville returns to a much more traditional playing schedule when also drawing the regular-season schedule to a close with a visit to I-Meck foe Mallard Creek on Friday night.

Why Ronaldo and Mbappé's futures are inextricably linked

Why Ronaldo and Mbappé's futures are inextricably linked

Time runs out on a career

The final buzzer has sounded. The last pitch has popped the mitt. Game over.

JERUSALEM (AP) — Artem Dolgopyat fulfilled a lifelong dream when he won a gold medal at the Tokyo Olympics. But back home in Israel, his hopes of trading gold wedding bands with his longtime girlfriend seem to be an impossible dream.

US swimmer Andrew goes maskless behind scenes at Olympics

Michael Andrew, who made waves for saying he wasn't vaccinated against COVID-19, didn't wear a mask behind the scenes after swimming his final.

Canada has defeated the US women's team in soccer semifinals. American gymnast Jade Carey has won the gold medal on floor exercise. The latest from Tokyo.

The rich has gotten richer.

Paul Chelimo, who earned multiple All-America honors at UNCG, has advanced to the finals of the 5,000 meters in track and field at the Olympic Games in Tokyo.

Why Olympians bite their medals and what they do with them

The sight of a jubilant Olympian standing atop the podium after being victorious in their discipline with a gold medal between their teeth is an iconic one. But why?

Olympic moment: Record-setting 400-meter hurdles final is being called the greatest race ever

The race produced a world record, a masterpiece and slice of history. It might have been one of the best races ever run. Here's why.

One strike remains for Area III in American Legion postseason

Hauling the heaviest load, Mooresville’s Glenwood Robinson plows his way through defenders during a carry against North Mecklenburg in the Blue Devils’ home win on Monday night.