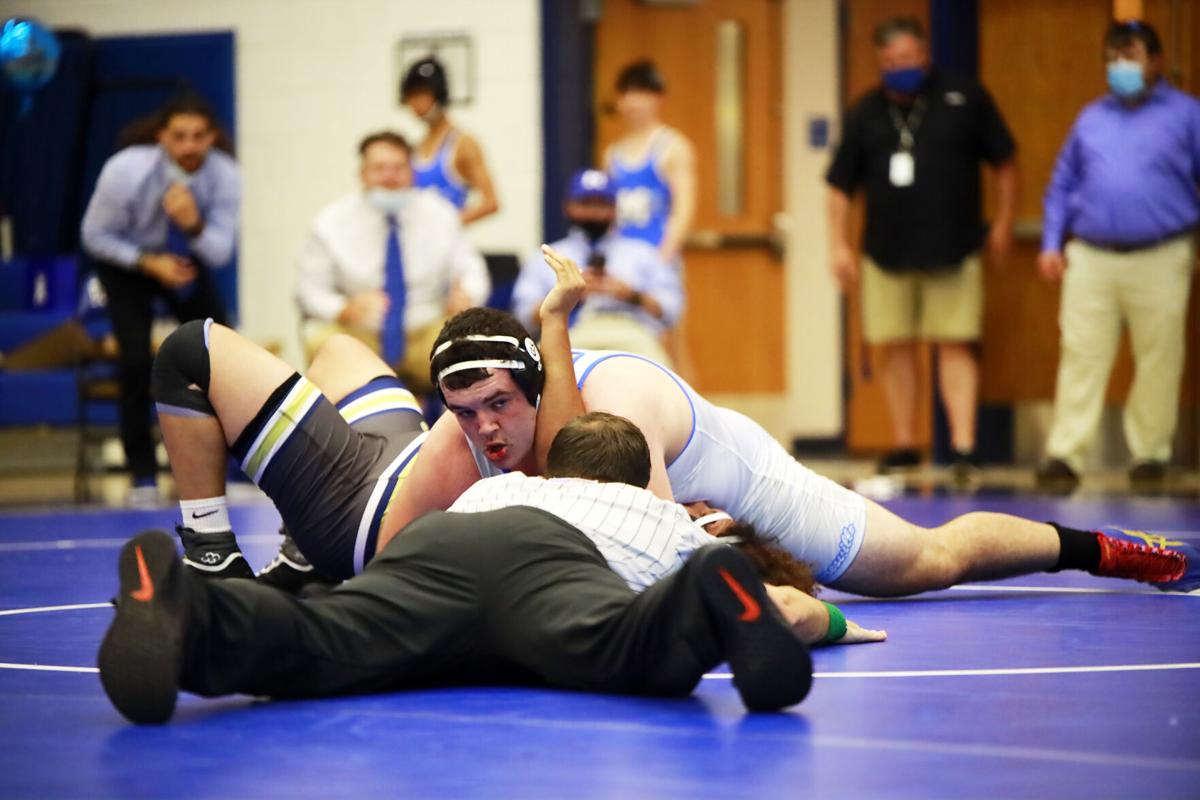 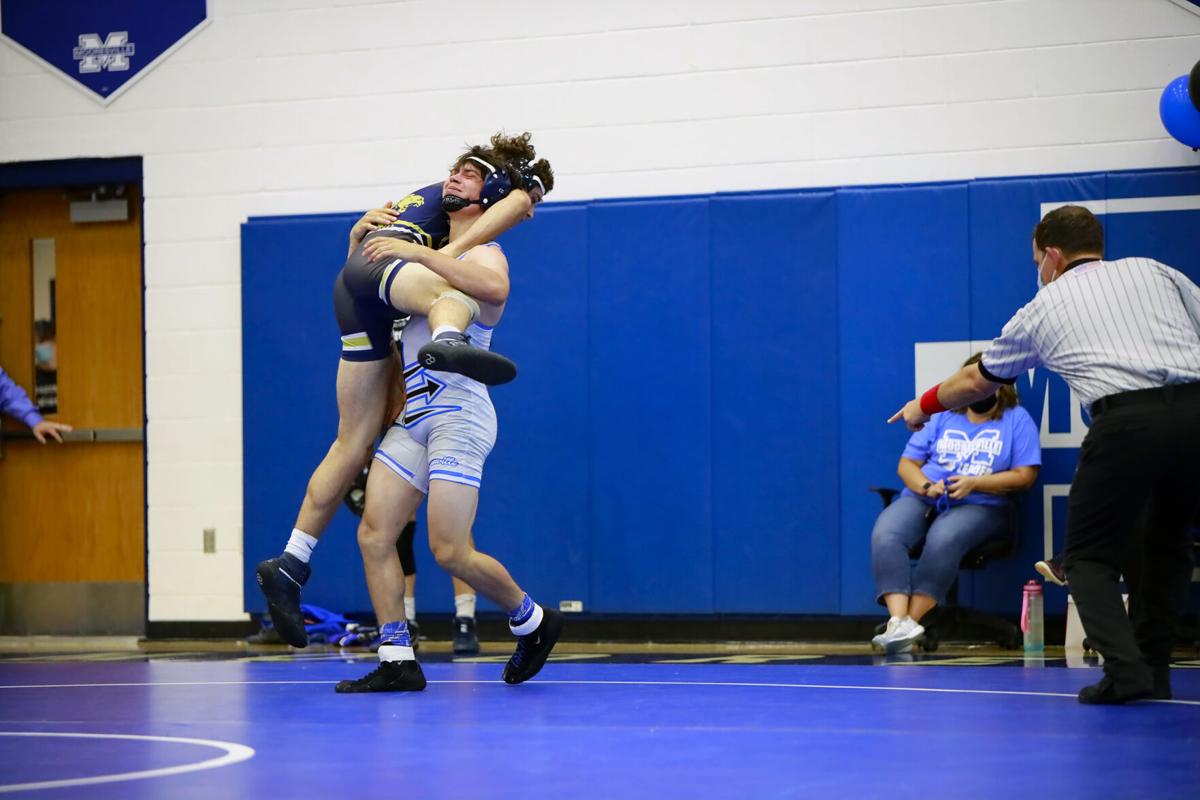 Primed for a fall, Mooresville’s Jake Emmert prepares to take down his fellow 145-pound weight class opponent to the mat.

Pounding out the hits.

Mooresville High School’s wrestling team managed to do just that when also engaging in the most meaningful segment of its remaining late-season surprising spring schedule.

Appearing in nothing else but pivotal I-Meck Conference clashes with the outcomes being used to determine potential dual-team postseason positioning, the Blue Devils emerged from as many as four matches with nothing else but wins to show for their active efforts.

Doing so as a part of a pair of three-team affairs both taking place in a mere three-day span, Mooresville piled up decisive decisions in all four head-to-head sessions to also exit from the duels with no worse than a share of first-place in the updated I-Meck ranks in tow.

For the record, the Devils paraded their way to one-sided outcomes by scores of 62-15 over Mallard Creek, 84-0 against North Mecklenburg, 76-6 opposite Zebulon Vance and 82-0 over Hopewell. Combined, the results serve to keep the Devils very much in the thick of the league title chase with only one more week’s worth of regular-season wrestling remaining.

That, too, remains crucial. During a campaign very much affected by the presence of COVID-19 that actually pushed the wrestling season from its traditional mid-winter portion of the calendar year into a first-time-ever showing in the spring, only a limited number of teams will be rewarded with coveted dual-team playoff bids.

Mooresville more than did its part to preserve its position with the rash of wins.

In the verdict rendered against Mallard Creek that also wound up being the most competitive of all the affairs, wins by pinfalls carrying the maximum amount of team points apiece were secured courtesy of Collin Neith at 113 pounds, Johnny Merriman at 145 pounds, Jake Emmert at 152 pounds, Luke Goodin at 160 pounds, Alex Jones at 170 pounds, Brady Rabb at 182 pounds, Ray Watson at 220 pounds and Austyn Barton at 285 pounds.

At 126 pounds, the Blue Devils’ Jaiden Noblezada earned a win by decision, while at the 138-pound class, Mooresville’s Davis Freeze claimed a win by technical fall.

A forfeit was handed to Harrison Kouzel at 132 pounds.

In the match-up against North Meck resulting in the equivalent of wrestling perfection, pin wins collected by Neith, 195-pound class entry Desmond Jackson, Watson and Barton were surrounded by forfeits gifted to Calvin Nguyen at 106 pounds and Austin Emmert at 120 pounds as well as Noblezada, Kouzel, Freeze, Merriman, Jake Emmert, Goodin, Jones and Rabb.

With each of the outcomes carrying the most number of points possible in a wrestling match, it accounted for the highest scoring total possible while also registering the shutout to score the equivalent of wrestling perfection.

In the victory over Vance, pinfall wins were clocked in by Jake Emmert and Goodin, while Austin Emmert merited a win by major decision. Forfeits apiece were also handed to Nguyen, Neith, Noblezada, Freeze, Merriman, Jones, Rabb, Jackson, Watson and Barton.

And in the blanking of Hopewell, pins apiece picked up by Goodin, Jackson, Watson and Barton were joined by Freeze’s major decision in matches that were able to be held.

In the ones that weren’t, forfeits were awarded to Nguyen, Neith, Noblezada, Kouzel, Merriman, Jake Emmert, Jones and Rabb.

Mooresville returns to the mat when appearing in what has all the makings of a marquee match when facing off against fellow current I-Meck co-leading and host Hough High on Tuesday that also serves to christen the final full week of the wrestling’s regular-season schedule.

Being the best takes beating the best. It was, simply stated, not to be.

It pays, now more than ever, to be prepared.

Area angler adds another keeper to cast of fishing treasures

New Zealand weightlifter Laurel Hubbard has qualified for the Tokyo Olympics to become the first transgender athlete to compete at an Olympic Games.

Preview part of planning process for pair of baseball operations

A preview of things to come.

Consider it a classic case of mixed – and missed – signals.

Primed for a fall, Mooresville’s Jake Emmert prepares to take down his fellow 145-pound weight class opponent to the mat.