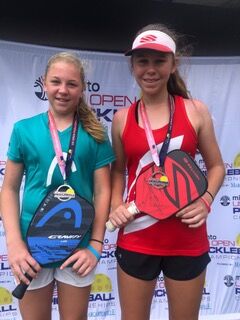 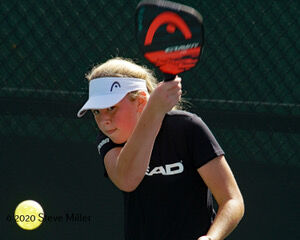 Serving youth, Mooresville's Britton Pemberton is part of a pair of second-place finishing entries during competition in the United States Open Pickleball Championships. 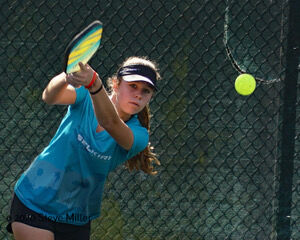 A pair of same-family members are currently immersed in just such colorful conditions following their most recent performances – both as a tandem and individually– in what is considered to be one of the premier attractions involving their favorite sport.

Mooresville-based sisters Payton and Britton Pemberton each have their fair share and then some of mementos to proudly display upon their return from participation in the Minto United States Open Pickleball Championships.

Considered one of the pinnacles of pickleball attractions to take place, the U.S. Open was conducted over the course of seven days and appealed to professional and amateur-level participants alike. It was staged on the East Naples (Fla.) Community Park site that consists of 64 courts. One of the two top-notch attractions the sport, joining the USA Pickleball Nationals in that regard, the affair drew in excess of 2,100 athletes representing 48 states and hailing from 12 countries. The youngest competitor was age 9 and the oldest was 86.

The Pemberton pair fell in between the age-division lines.

The twosome made quite an impression when kicking off their participation in the Junior Girls Doubles for players ages 16-18. The team defeated the pre-event favorites that featured one member already engaging in a pro career to jump-start the showing.

“We went into that match knowing that it was going to be the toughest one for us,’’ said team elder spokesperson Payton. “We impressed ourselves with how we played and were really proud of pulling that out.”

As it turned out, the two teams also met a second time and, after salvaging a split, the Pemberton entry secured the second-place silver medal determined by a tiebreaking point-differential procedure.

“We faced them but split matches in super windy conditions,’’ said Payton. “Unfortunately, the gold medal came down to point differential. I feel like it was a really strong display of junior girls pickleball. It just goes to show that youth, especially girls, shouldn’t be discounted.”

The proof on the part of the Pemberton pair continued to be provided.

Payton Pemberton then competed in the older Junior Mixed Doubles comprised of players 16-18. There, she joined forces with a male teammate in the form of Key West (Fla.) native William Sobek to emerge as the division’s national champions.

“I knew my role,’’ said Payton, well aware that opponents would target her rather than her teammate regarded to be one of the best junior-level boys players in the country. “Going into it, you know that other teams are going to do what they can to keep William from seeing the ball. I’m proud that I was able to execute and get William involved. I’ve been playing a lot of high-level mixed doubles locally, and that certainly helped me prepare for what I would face in this event.”

It was then younger sister Britton Pemberton’s turn to shine.

She paired up with a fellow in-state player in the presence of Shelby’s Gage Earwood to chime in with a second-place finish in the younger U.S. Open Mixed Double for players up to age 15. The team crafted a 3-1 record to support its silver medal status.

Adding to her productivity, Britton defied her position as the younger player in the 33-team field for play in the Mixed Doubles Adult Division by teaming with a first-time teammate to accumulate four wins.

It accounted for quite a continued climb up the sport’s ladder for the sisters who had never even head of pickleball three years ago. The family, including mom Andrea and dad Ryan, were introduced to the sport during a beach vacation in 2018. Joining a long list that according to the Sport and Fitness Industry Association indicated that pickleball participation among all ages increased by more than 21 percent over the last year alone, the Pembertons became immediately hooked. They were attracted to the game that features a mixed bag of Ping-Pong, badminton and tennis talents to perform.

“Everyone who plays,’’ said Andrea Pemberton, “talks about how addicting it is. The girls have played a lot sports, but once we discovered Pickleball, it quickly became their focus. It’s both a physical and mental game. There is a lot of strategy, and it always seems to be evolving. It’s a great game for all ages.”

The younger family members seem to show no signs of slowing their participation.

“The best part,’’ said Britton, “is the tournaments. I just love to compete. I love seeing all my friends and meeting new ones. We have a lot of fun in between the matches. A lot of my friends are older people who have supported us since we first started.”

They are just as eager to share their enthusiasm. Currently homeschooled, the sisters are heavily involved in the promotion of pickleball growth. They each volunteer weekly as coaches for the Town of Mooresville’s Therapeutic Pickleball program.

They have more opportunities on tap to showcase their skills.

The Pembertons are scheduled to compete in about 10 more tournaments, including this month’s Virginia Pickleball Classis and the prestigious USA Pickleball Nationals to take place in California in November.

Some props to look at tonight between the Lightning and Islanders

Some props to look at tonight between the Lightning and Islanders

Being the best takes beating the best. It was, simply stated, not to be.

New Zealand weightlifter Laurel Hubbard has qualified for the Tokyo Olympics to become the first transgender athlete to compete at an Olympic Games.

A word of advice to the baseball-related powers that be in the South Iredell Athletic Association: Get a bigger umbrella.

Preview part of planning process for pair of baseball operations

A preview of things to come.

It pays, now more than ever, to be prepared.

Consider it a classic case of mixed – and missed – signals.

Area angler adds another keeper to cast of fishing treasures

Serving youth, Mooresville's Britton Pemberton is part of a pair of second-place finishing entries during competition in the United States Open Pickleball Championships.