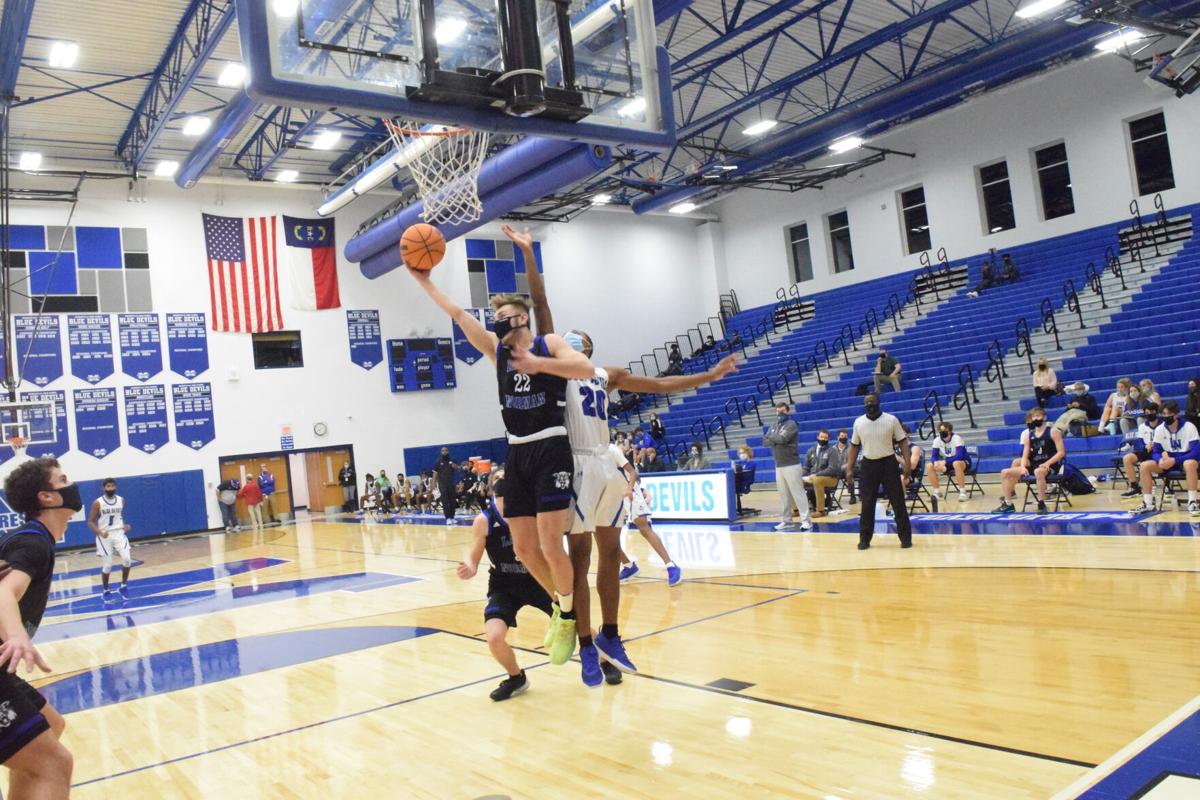 Going up and under, Lake Norman's Cam Kepley maneuvers his way around a Mooresville defender during a drive against the Blue Devils. 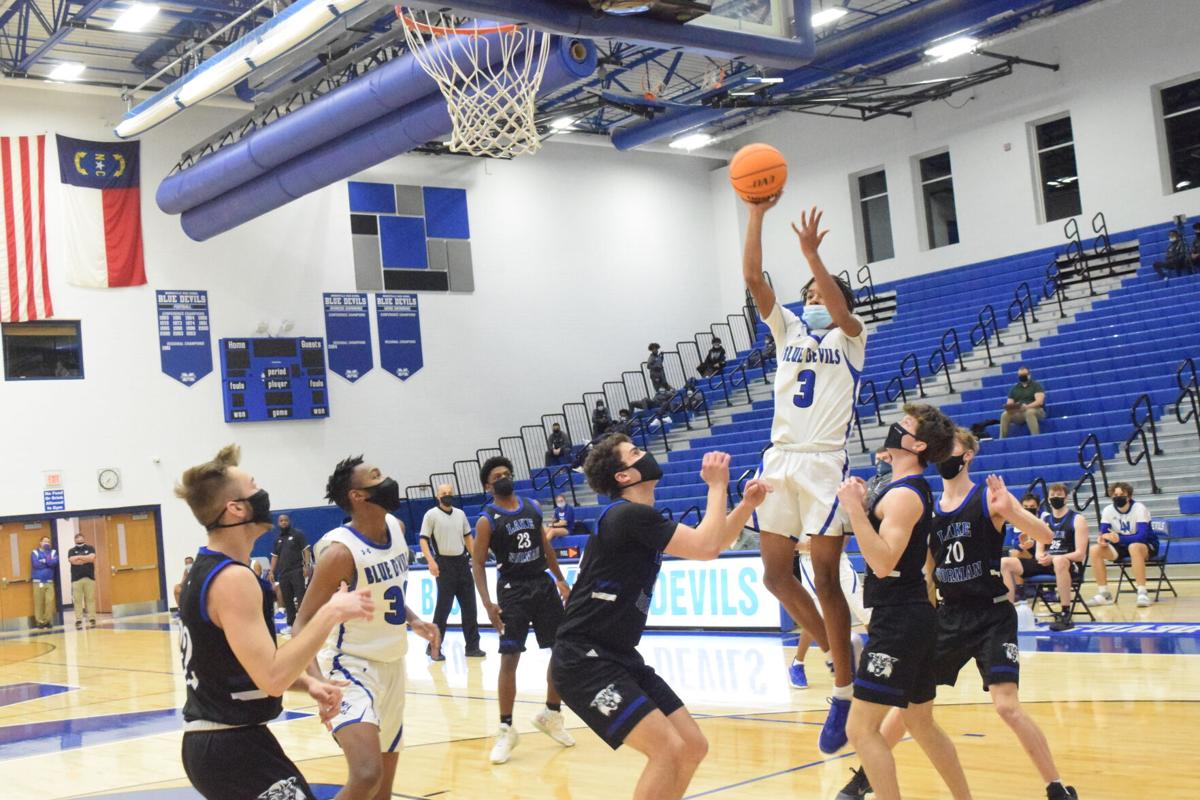 Above the crowd, Mooresville's K.C. Shaw soars over a floor full of grounded Lake Norman defenders during a drive against the crosstown rival Wildcats.

Last Thursday, Charlotte-Mecklenburg Schools called an early-morning emergency meeting to address the immediate future of their athletics. Ultimately, they voted pause all athletic activities until at least Feb. 15.

Unfortunately for two high schools in Iredell County, that decision had an unintended side effect that hinders them almost as much as it did the schools in Mecklenburg County.

Both Lake Norman High School and Mooresville High School are in a conference that is, outside of themselves, entirely made up of CMS schools. So, when that decision came down, the Wildcats’ and Blue Devils’ basketball, both men’s and women’s, and men’s soccer seasons were paused as well.

Except they weren’t. The search was on for games to fill those holes in the schedule.

“I have mentally prepared myself this year to expect anything in regards to COVID,” Lake Norman athletic director Jay Keener said. “I was not at all surprised by the decision but I did feel that it was made at a very awkward time.”

Even before both teams took the court on Jan. 14, both school’s athletic directors, along with each team’s head coach, were already working the phones trying to find other schools that had open dates on the schedule.

Fortunately for them, they weren’t the only non-CMS schools in conferences that were predominantly made up of schools in Mecklenburg County. Hickory Ridge of Cabarrus County and Porter Ridge of Union County fell into the same boat as LHNS and MHS.

“I reached out to Porter Ridge and Hickory Ridge right away,” Mooresville athletic director Charles Hopkins said. “I was at a cross country event on Saturday and I was on my phone the whole time trying to get games. It was kind of crazy how it all worked out.”

Within a day of the announcement that the schools would be without games for nearly a month, both Lake Norman and Mooresville had each added a pair of games against Porter Ridge between Jan. 22 and Feb. 4.

Mooresville also added a trip to Kannapolis on Feb. 3. The Wonders had lost a non-conference game against a CMS school and Hopkins jumped at the opportunity to schedule the game.

Lake Norman locked down a pair of games against Hickory Ridge as well, along with a trip to RJ Reynolds in Winston-Salem. According to Keener, the travel distance was not a factor.

Despite the stress CMS’ decision caused, both athletic directors understood the decision that the board made in the face of the spiking COVID-19 cases in Mecklenburg County.

“You can’t ever fault anybody for doing what they think is right for the safety of kids,” Hopkins said.

“I understand that everyone is still trying to remain optimistic about things but these are hard decisions to make,” Keener said. “Part of me wants our athletes back and playing but another part of me wants to get all of this under control and get us to a point where we aren't having to manage the ‘what ifs’ anymore.”

Both basketball teams will be back on the court on Jan. 22.

Will we see Deshaun Watson this season?

Will we see Deshaun Watson this season?

The heat is on.

IZU, Japan (AP) — Jolanda Neff was laid up in a North Carolina hospital room on Christmas Day two years ago, wondering whether a terrible crash during a training ride in the mountains near Asheville would ruin the Swiss cyclist's career.

The Tokyo Olympics opening ceremonies are less than a day away. Here are the latest headlines from Japan, plus a look ahead at what's to come.

German athletes' unitard a move 'against sexualization in gymnastics'

OYAMA, Japan (AP) — Richard Carapaz climbed onto the medal stand and locked arms with Wout van Aert on his right and Tadej Pogacar to his left, the diminutive Ecuadoran rider dwarfed by two of the giants of modern cycling.

Tennis star Naomi Osaka has lit the cauldron at the Tokyo Games, ending the flame’s journey from Greece to these delayed Olympics. Relive the opening ceremony, in photos.

Ticket! Get your tickets here!

Going up and under, Lake Norman's Cam Kepley maneuvers his way around a Mooresville defender during a drive against the Blue Devils.

Above the crowd, Mooresville's K.C. Shaw soars over a floor full of grounded Lake Norman defenders during a drive against the crosstown rival Wildcats.