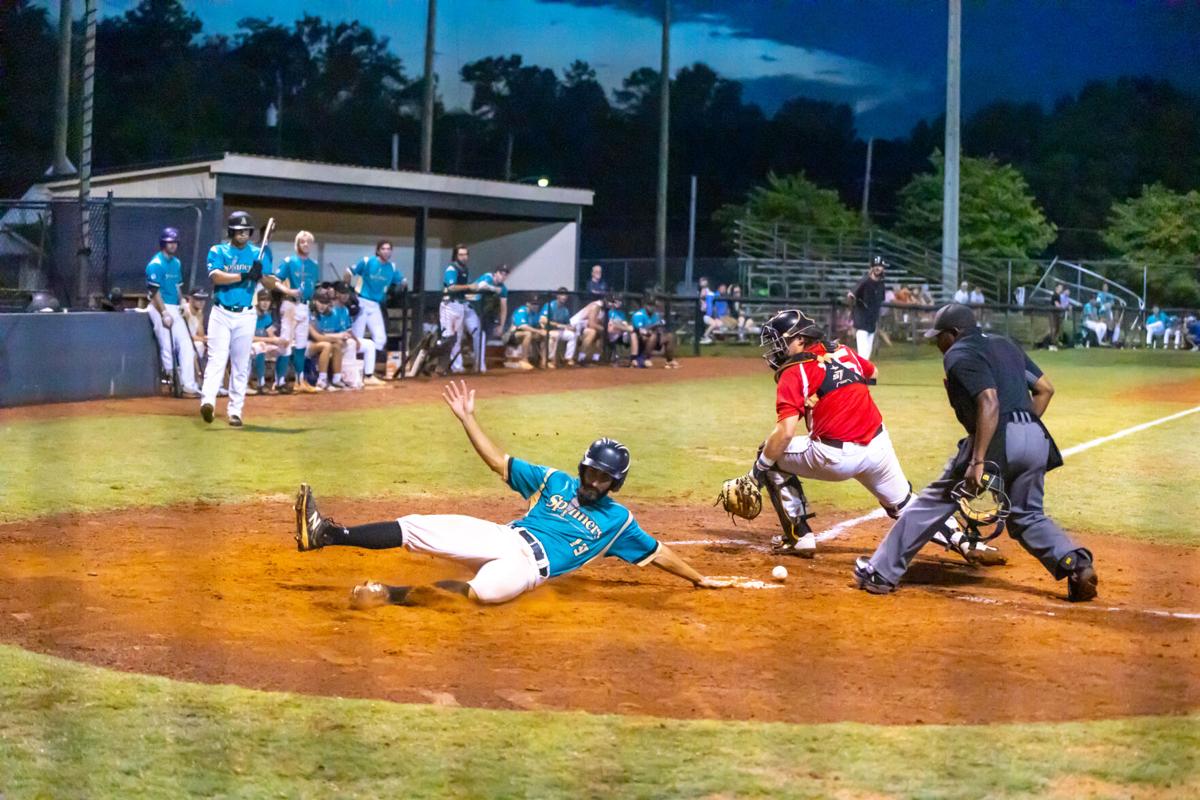 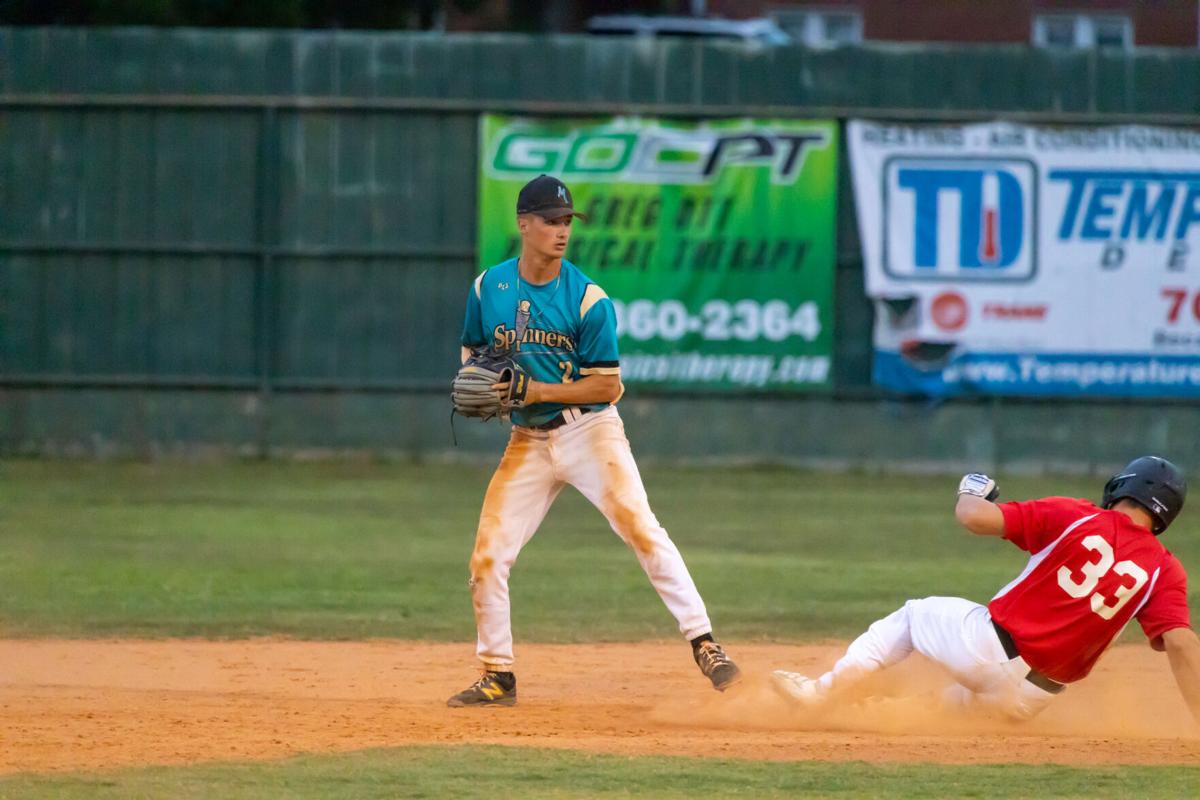 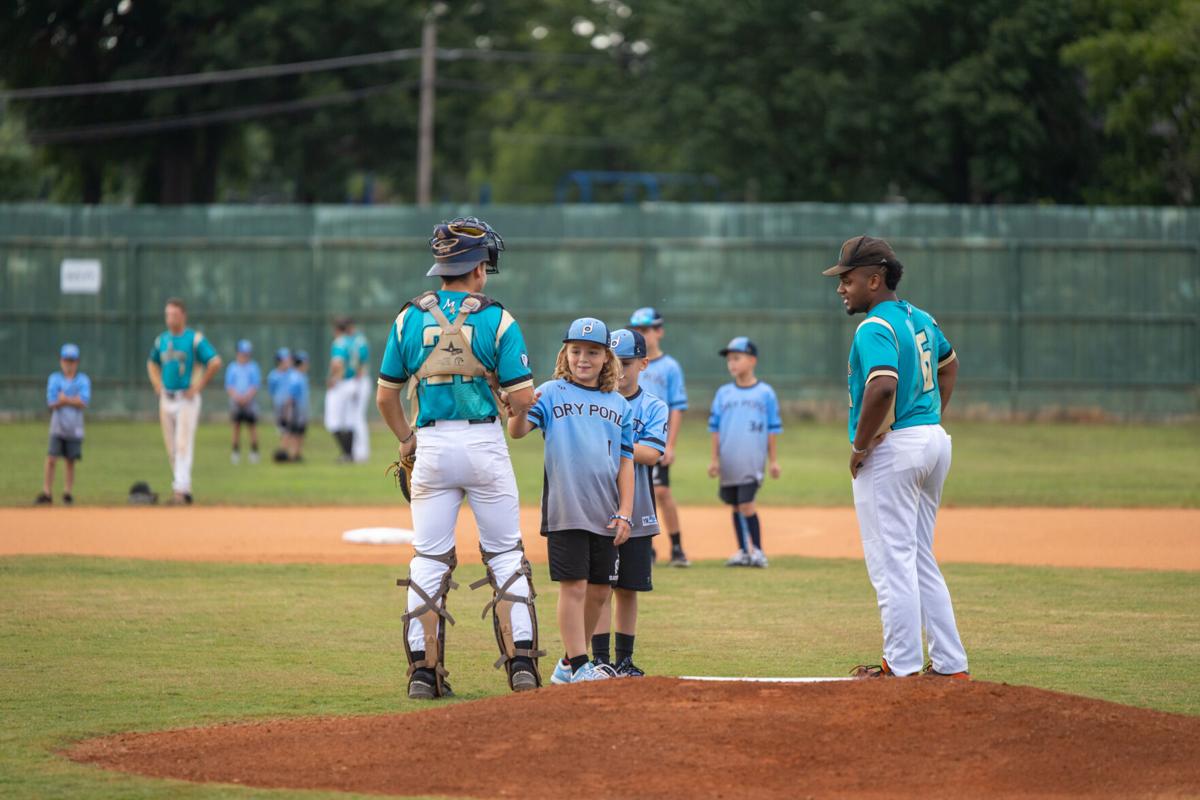 Youth is served as members of a team decked out in full uniform join members of the Mooresville Spinners during participation in some pre-game activities on Youth Appreciation Night.

The Mooresville Spinners prominently pronounced themselves to be in just such a positive position upon the polishing off of the pivotal on-the-road portion of regular season play.

Engaging as back-to-back conference-counting affairs used to draw the away portion of their regulation schedule to a close while also successfully christening the final home stand, the Spinners solidified their placement as a top-three finisher in the Southern Collegiate Baseball League ranks.

For good measure, and to keep the current v ibes in place, the Spinners also ventured outside the circuit ranks for the final time this season and—after withstanding a near two-hour-long weather delay – made it a success as well.

Mooresville, two summers removed from capturing its franchise’s first and so far only SCBL second-season tournament title, assured a somewhat favorable seeding status for the circuit’s upcoming postseason edition by first outlasting the defending league kingpin Piedmont Pride, 4-3, before racing off with a never-in-doubt, 20-4 throttling past the rival Lake Norman Copperheads.

Against the non-league entry Catawba Valley Stars, the Spinners made the extended weather wait worthwhile when emerging as a 7-0 victor.

By so doing, the Spinners headed into the final full weekend of both SCBL and regular-season play with their position in the league standings assured on the strength of a 16-11 record to show for all circuit clout-carrying contests that continue to hold the most weight in an overall 19-15 effort that they owned entering the campaign’s final phase.

Regardless of what transpires during the course of the team’s final games of regular season play, Mooresville is guaranteed to finish no worse than third place for the season to merit such status for the beginning of the SCBL postseason play that is set to begin early next week.

Piling up the damage early and often following a near hour-long weather delay, the Spinners shell-shocked their nearest in-league opponents to such the extreme that matters were called to a close well ahead of the regulation nine innings due to a mandatory run-lead mercy rule.

Offensively, fireworks sparked early as the Spinners piled up all 20 of their runs over the course of the first four frames, an eruption highlighted by the pushing across of nine runs home alone in the bottom half of the second stanza.

Lighting up the scoreboard in such a manner also allowed the Spinners to make a success of Youth Appreciation Night. All youngsters arriving in uniform were admitted free and some select attendees joined team members during pre-game and several in-game festivities.

The third time was the charm on the part of the guests, who overcome an early two-run deficit before losing the grip on a one-run lead of their only prior to taking the edge for good in the third and final lead change of the game.

At the plate, relative roster newcomer Dalton Williams (Dallas, Appalachian State University) made his presence felt by slugging a double and also driving in a team-best two teammates. Hennings topped the attack with his three hits, while Fox tripled and Christian Maggio (Myrtle Beach, South Carolina, Charleston Southern University) doubled to join Zayicek and Andress with single base hits each.

The verdict was rendered on what was Mooresville’s third and final scheduled appearance on the Pride’s home Truist Park field in downtown Charlotte that doubles up as the home of the professional Minor League Baseball member Charlotte Knights. In the three games held on the site, the Spinners posted a 2-1 record to show for the efforts put forth the pro site that provides a view of the Charlotte skylight in the background.

Closing out the non-SCBL portion of play, the Spinners logged in with all the scoring to down the Stars.

Fox stroked three hits, one of them good for a triple, and accounted for two runs batted in while Hennings belted a two-run home run to highlight the attack. Hometown product Davis Turner (Mooresville, Lenoir Rhyne University) aided the effort by banging a double.

In drawing the regular-season schedule to a close, Mooresville entered the final weekend on tap to appear in consecutive-night home games against the Concord Athletics and Carolina Venom, with results from both of those outings posted too late to be included in this edition. The second of the games was also held on the Spinners’ final promotional evening of the seaso n taking shape in the form of a second installment of Craft Beer and Festival Night.

Next week, home is most definitely where their heart will be indeed as the Spinners have been designated as the hosts of this year’s SCBL tournament. With pairings to be set at the close of the weekend and revealed on the league’s online web page by Sunday night, games in the double-elimination attraction on tap to take place beginning on Monday morning at Moor Park. Multiple contests will take place daily through the crowning of this shortened season’s official league champion following the title tilt set to be held on Friday or perhaps even Saturday night.

Feeling bowled over by the coronavirus?

Back up that athletic activity bus.

The brewing of certain beverages can be considered a craft. The fruits of that labor were made available to any wishing to sample the offering…

Two steps forward before taking just as many back.

Youth is served as members of a team decked out in full uniform join members of the Mooresville Spinners during participation in some pre-game activities on Youth Appreciation Night.